Before the current building boom brought dozens of new buildings to the Toronto skyline, the late 1980s and early 1990s saw an earlier wave of growth in our city. The optimism in the years before the 1990s recession brought a wave of Postmodern architecture—the prevailing style of the era—including a 17-storey, 291,000 ft² office building at 33 Bloor Street East. Now managed by property and asset managers Epic Investment Services on behalf of its institutional investors, the building was originally constructed in an era of big changes for the city, but the last decade has brought even more change to the surroundings, and the importance of the Bloor-Yonge subway station—right below the building—has only grown over time. The current wave of growth has been a major contributor to a recent renovation of the building’s aesthetics and its interface with its surroundings. Originally constructed as the Xerox Centre by Bramalea Developments, the development was completed prior to the 90s financial crash. The developer declared bankruptcy in 1995 in the face of the market decline, with the building next coming under the ownership of Oxford Properties and Dorsay Developments Corporation before its acquisition by the current consortium of owners with management under Epic. With changes to the surrounding built form and shifts in tenant demographics, Epic decided to refresh 33 Bloor Street East’s ground-floor interiors, along with its interface with Bloor Street to the north, Hayden Street to the south, the newly-built One Bloor East to the west, and Canada’s busiest subway interchange directly below.

Epic engaged WZMH Architects to lead a massive $25 million design overhaul of the building, to improve flow and aesthetics while working within the constraints established by the property’s location over a busy subway interchange. Completed in 2020, the project has reconfigured 33 Bloor’s ground floor to help extend the growing Bloor Street shopping corridor, with a futuristic interior that dovetails with the design of its new next-door neighbour at One Bloor East. The bright future of the surrounding area was evident to the building’s original development team long before the rise of the skyscraping towers that now define the Bloor-Yorkville area. It was clear that the adjacent property at 1 Bloor Street East would eventually be redeveloped, leading to the building’s underground levels being constructed with knockout panels for future connections. While the prediction that the site would be redeveloped proved correct, Great Gulf instead opted to include a grade-level connection in One Bloor East. While 33 Bloor East previously enjoyed access to Yonge via the uniquely urban Roy’s Square, the renovated 33 Bloor interiors now connect to Yonge via a climate-controlled indoor connection built as part of One Bloor East, and following roughly the same route as the east-west section of the now-vanished Roy’s Square.

The subway interchange at Yonge and Bloor has been a major factor in both the original design of the building as well as its recent modernization. Constructed atop the active subway station below, the building was built on concrete transfer beams at the mezzanine level, while the ground floor level, the P1 parking level and the elevator core are suspended from these concrete transfer beams above the Yonge subway tunnel. The structural elements informed the design of the refreshed lobby, surrounding ground floor, and P1 level spaces. WZMH was limited to work within the existing structural constraints to avoid any added loads to the subway below.

Images of the completed ground floor and descriptions of what is hidden behind the fins don’t quite convey the magnitude of the concrete posts and beams, nor the potential they had to limit the space’s aesthetic. Compounding the complex design, contractor PCL was required to keep pathways open during construction to accommodate the 20,000 commuters (pre-pandemic) that filtered through the building daily. PCL also had to avoid after-hours noise for the new condominiums that now tower above just to the west. An image from April, 2019 of the entry area after removal of the 1990s finishes and before the new fins and other bright white features were installed shows what WZMH and PCL were required to work around. 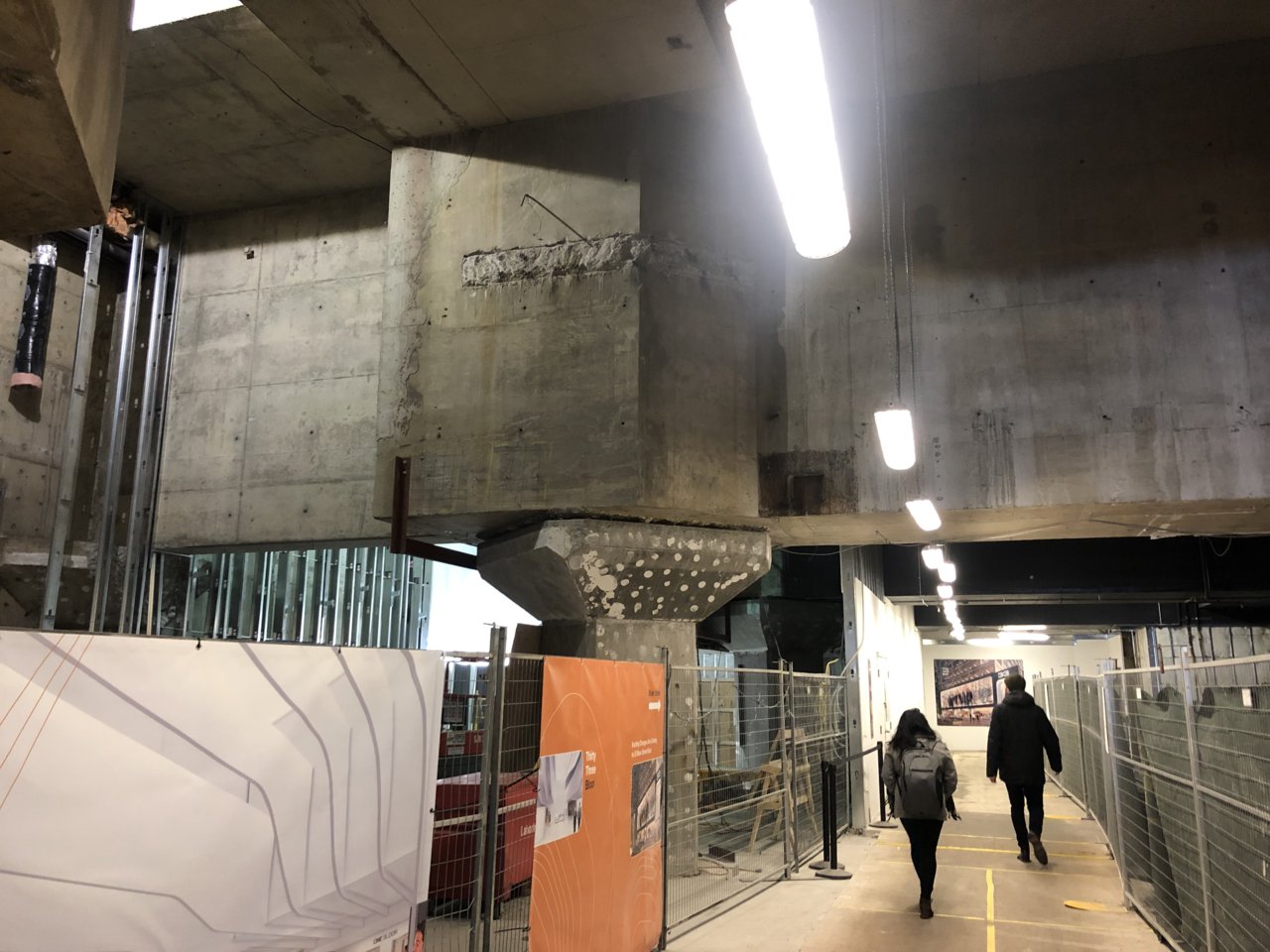 While the white fin design was shaped by the existing structure, at the same time it accomplishes other design goals that an earlier concept—in a glass box style—did not, conveying a sense of motion through the undulating fins and which act as a subtle directional cue, drawing transit riders towards the subway entrance.

The interior modifications are framed by a recladding of the building’s street frontages, with sweeping glass reveals that follow the curves of the interior space. In the case of the Hayden Street entrance to the south, fins continue beyond the glazing to extend this dynamic outdoors to the public realm. Along Bloor Street, (seen above in the second photo) the recladding works to frame new street-fronting retail, occupying space freed up by the office lobby’s modifications.

Previously, Bloor Street had a pair of entrances from to the building; one to the lobby, and one to the TTC station. Epic saw an opportunity to consolidate them into a single entry, opening up the former lobby entrance’s area for new retail opportunities. As the One Bloor East and West developments are extending the trendy Bloor shopping strip eastwards, and with a W Hotel to open on the north side of Bloor later this year, Epic is banking on the future of retail on Bloor Street East.

Among the new retail spaces, Cafe Landwer is gearing up to open a new location here, with plans in the works for a patio that will further animate the Bloor sidewalk. A trio of retail spaces remain available to lease in the building; a 4,729 ft² unit with frontage on Bloor, and a pair of retail units at 565 and 150 ft² are situated along the hallway to the subway station. These side-by-side spaces can be combined to make 715 ft² space, and Epic is currently showing off one of the possibilities for the available subway-adjacent retail with a vinyl wrap depicting a cafe. This two-dimensional cafe mockup offers passersby a glimpse of what could become of this space, while the rendering below provides a more lifelike concept of a potential cafe serving the building’s tenants and the thousands of commuters who pass by the space daily. In combining the TTC and office lobby entrances, Epic and WZMH have made for a more welcoming environment, one designed for 24-hour use. Creating a space for everyone—and not only tenants of the office above—through modern design and clear wayfinding, has primed the building to welcome more commuters and visitors in the soon-approaching return to normal. After three decades in a changing city, 33 Bloor East’s fresh new look is set to define the property for another generation.