A revised rezoning application for a mid-rise building in Toronto’s Junction neighbourhood has been submitted to the City, this time doubling the amount of proposed dwelling units, while not increasing the building height. 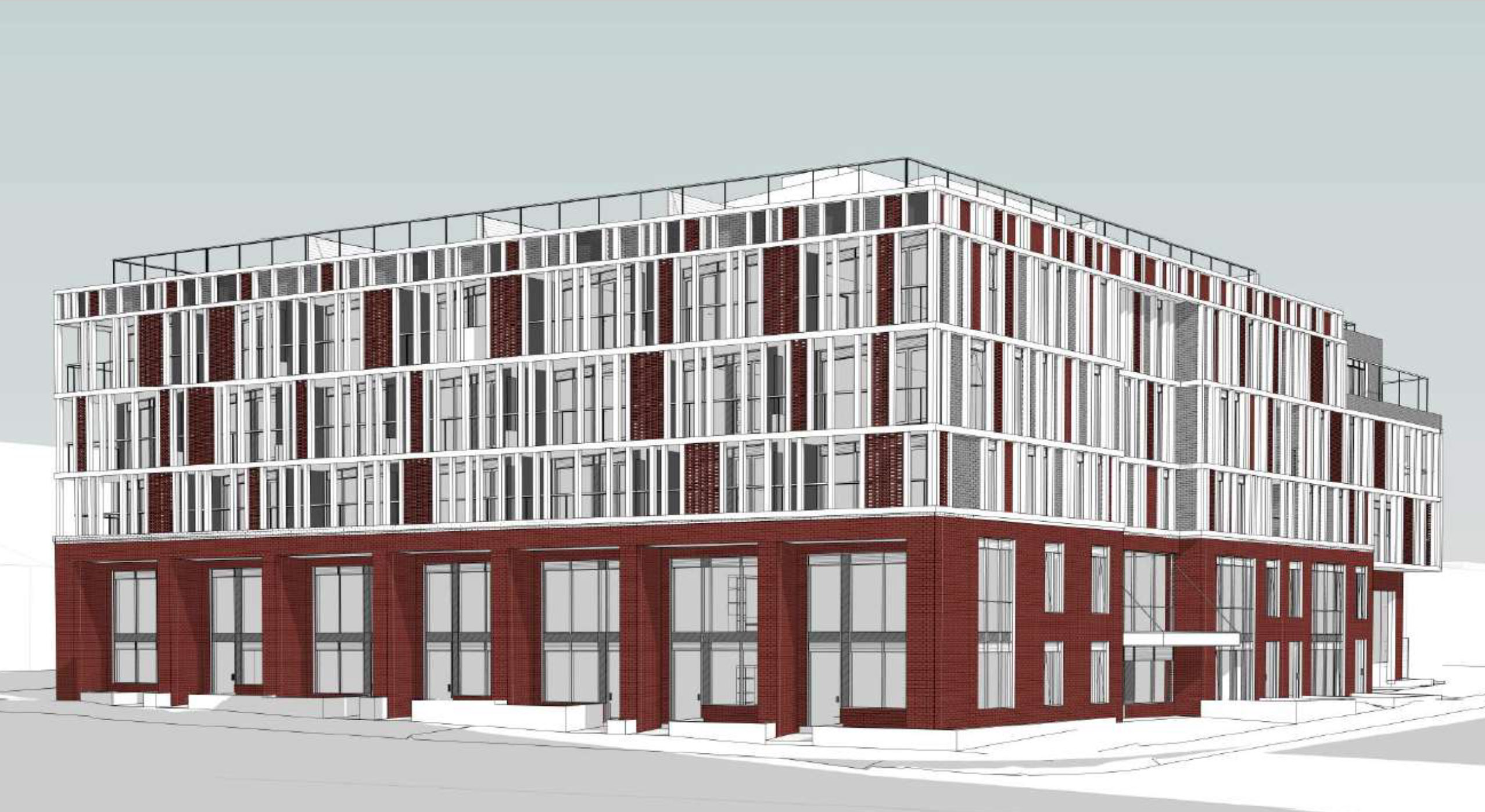 Looking southwest to The Stockton, image by RAW Design for Block Developments

The 1,418 m² site is located at 406 Keele Street on the southwest with Vine Avenue, between Dundas Street West to the south and the Canadian Pacific Railway corridor to the north. Those familiar with the site might remember it used to house the Subway Hotel, the Junction’s most famous ghost and illegal rooming house, which was demolished around 1986 by a gas leak explosion. The northern portion of the site is currently vacant and blocked off from public use and contains a landscaped area and large third-party display sign. The south side of the site contains a surface parking lot and sales trailer related to a used car dealership. 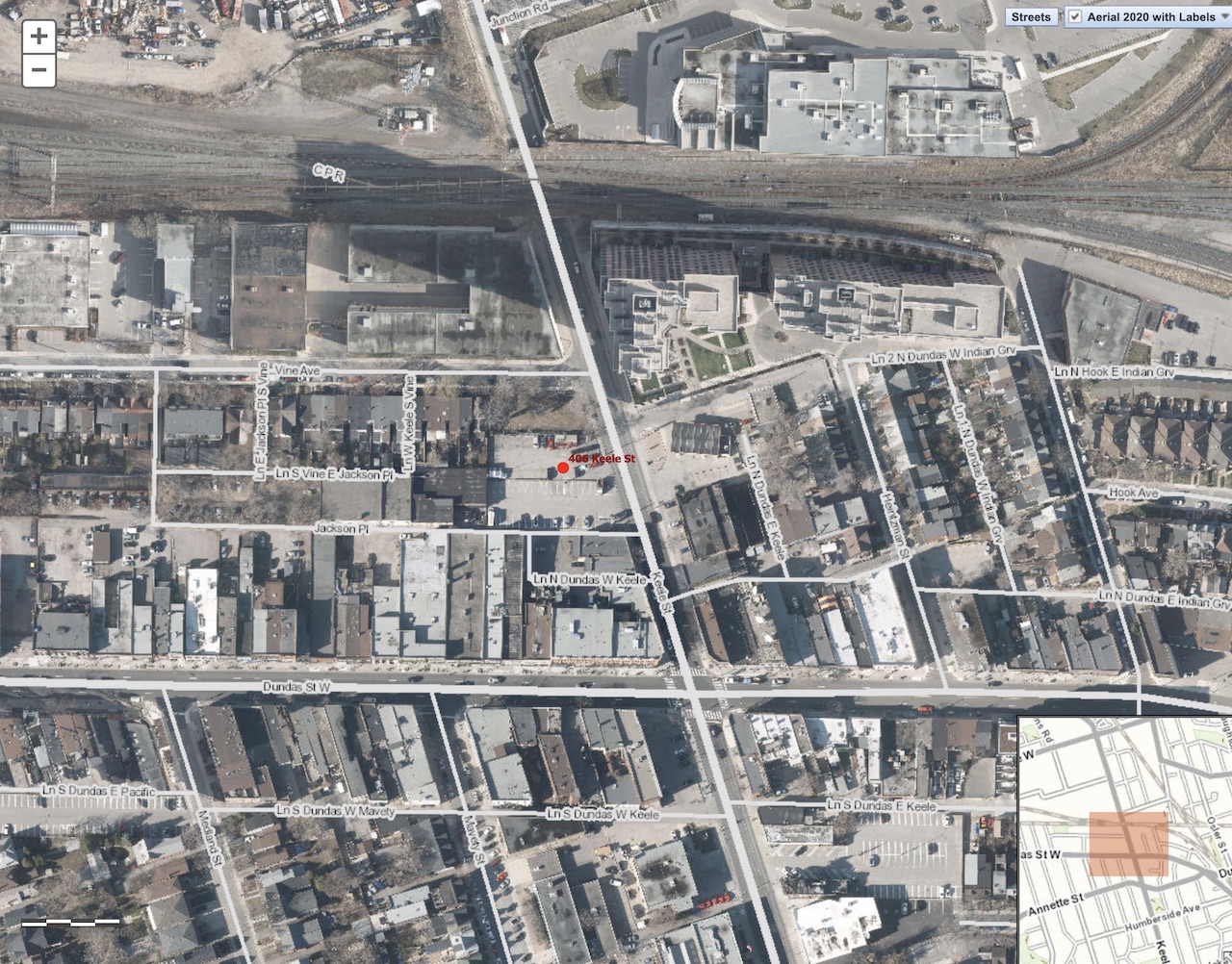 The site of The Stockton at 406 Keele Street, image retrieved from Toronto Maps

In August, 2019 an Official Plan and Zoning By-law Amendment (ZBA) application for the development of a 5-storey apartment building with 30 dwelling units, was approved in principle, with conditions, by the Local Planning Appeal Tribunal (LPAT, but now renamed the Ontario Land Tribunal or OLT). In December, 2020 Block Developments—which is marketing the building as ‘The Stockton’— submitted new applications for ZBA and Site Plan Approval (SPA) with a number of revisions. A community consultation meeting and presentation was held on May 26.

Photos of the existing site, left to right: 406 Keele and 410 Keele, image via the City of Toronto

RAW Design’s revised scheme generally maintains the approved (in principle) building envelope, including height, building setbacks and step-backs, however it includes a significant increase in the number of dwelling units (64 units instead of 30), the inclusions of a type ‘C’ loading space, and the removal of curb-side garbage pick-up.

The building is generally ‘L’ shaped, with its north and east elevations framing both Keele Street and Vine Avenue lined with planters that front the ground-level residential units. A total of 4,471 m² (increased from 4,222 m²) of residential gross floor area is proposed, resulting in a density of 3.2 floor space index (FSI). A small ‘courtyard’ at the southwest corner of the site includes a vehicular driveway leading to the underground garage, with a narrow 17 m² labelled ‘residential amenity’ (essentially a sidewalk), an area for dog relief, transformer, and a strip of landscaping. 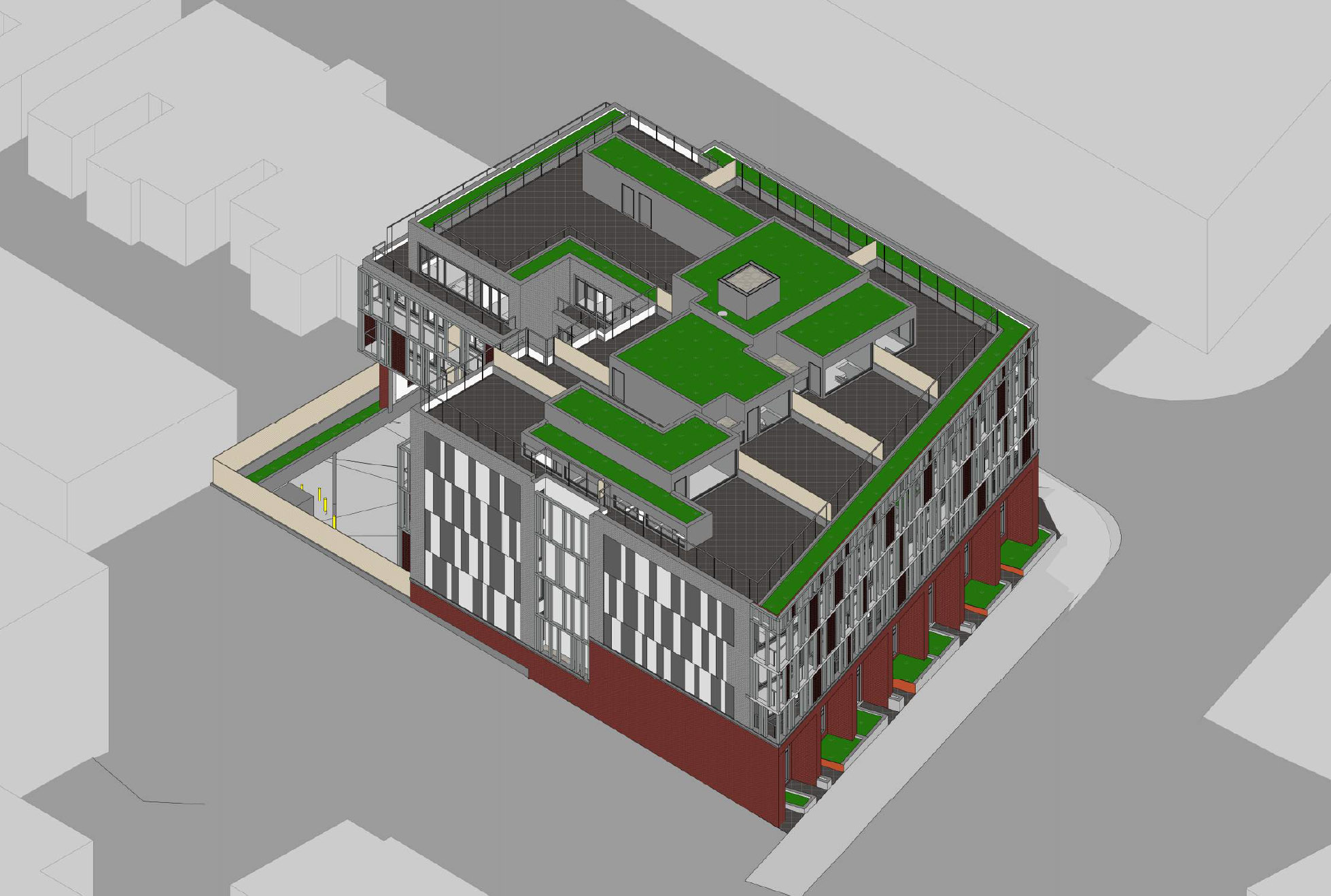 Looking northwest to The Stockton, image by RAW Design for Block Developments

The building massing reads as a 4-storey streetwall, which steps back at level 5 by 1.65 metres along Keele Street, 1.44 metres along Vine Avenue and 2.4 metres along the west facade.

The new design contains a total of 294 m² common residential amenity space. Indoor amenity space is now proposed in the form of a 88 m² room on the first floor with kitchenette, facing the courtyard. The rooftop level accommodates a shared outdoor amenity area as well as the private terraces accessed by enclosed staircases, with the building’s parapets providing protection. 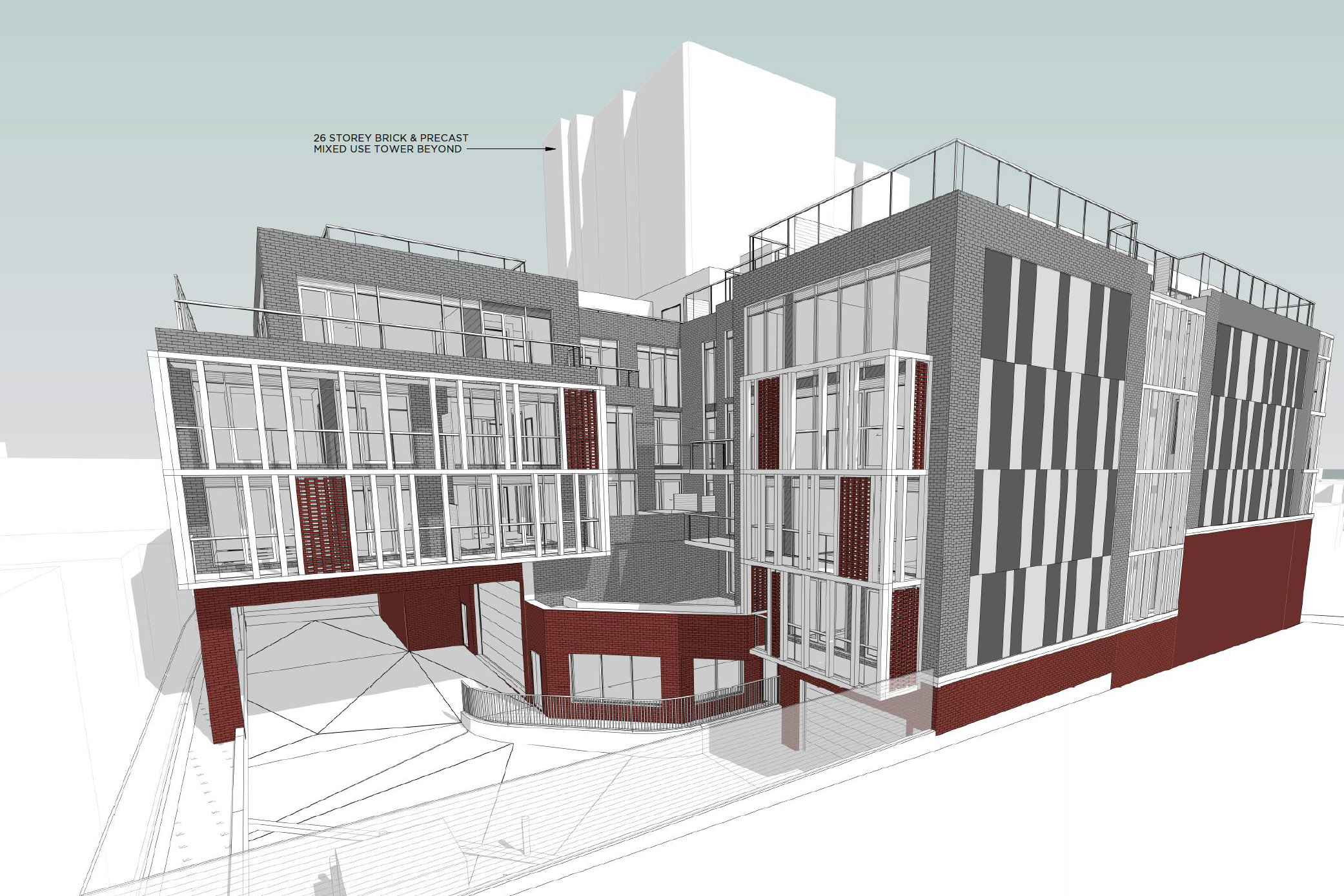 Looking northeast to the courtyard, including vehicular access to the garage, image by RAW Design

One level of below-grade parking garage provides space for 32 vehicles (increased from 31). A total of 64 bicycle parking spaces are also provided. The loading space, located within the centre of the building, is away from public view.

The enlarged north elevation below indicates the palette of exterior materials. The building’s red brick base is capped by a precast concrete cornice. Above that, a frame of vertical and horizontal metal is proud of the glass and grey brick cladding, with sections of perforated red brick masonry for additional architectural articulation. Two-metre-high frosted glass guardrails at the rooftop terraces serve as noise-mitigating privacy screens. 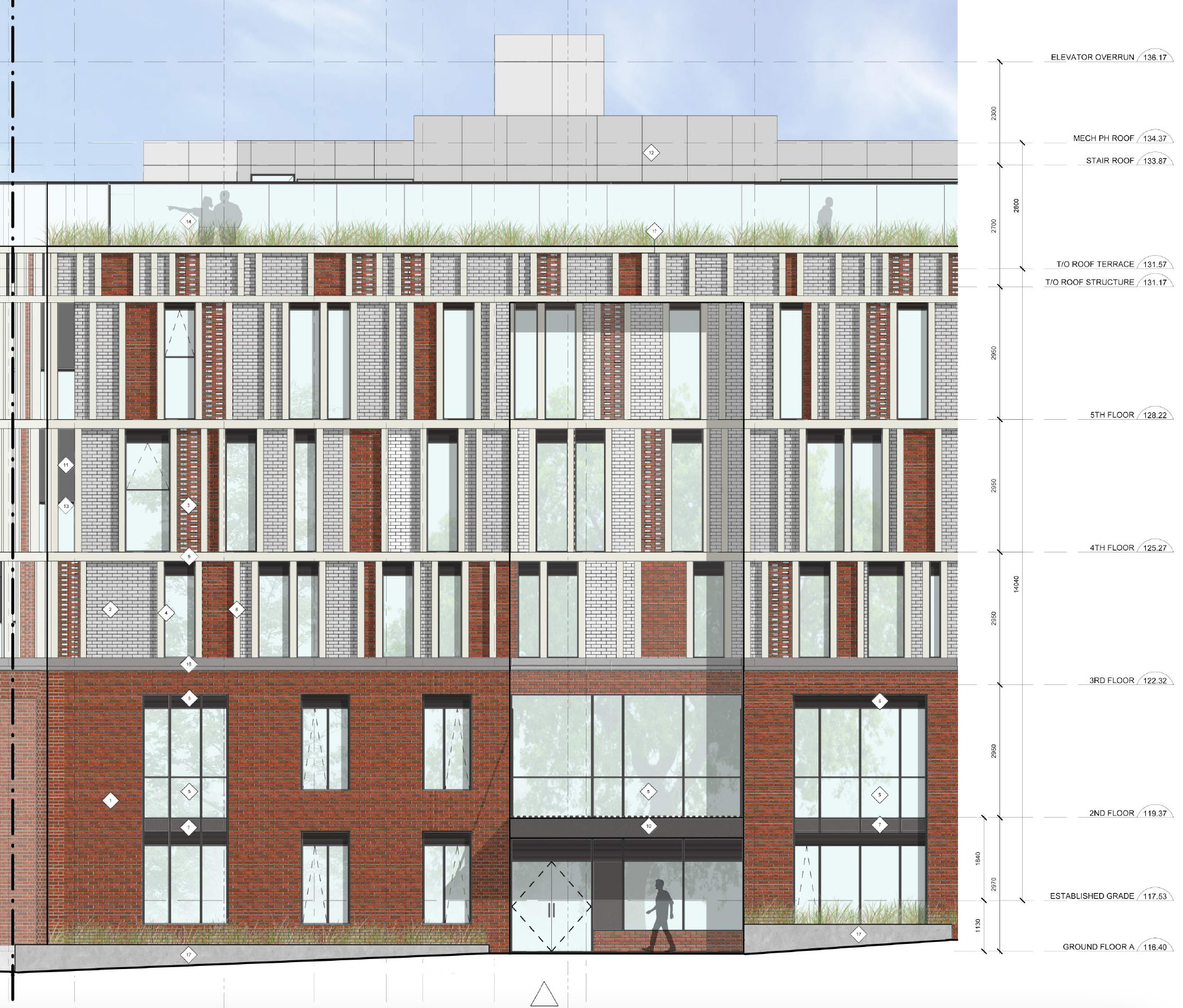 You can learn more—and see images of the previous design for the building—from our Database file for the project, linked below. If you’d like to, you can join in on the conversation in the associated Project Forum thread, or leave a comment in the space provided on this page.