The wheels are in motion for the long-awaited redevelopment of a 72-acre brownfield site on Mississauga’s Port Credit waterfront, with early construction progressing on the mixed-use Brightwater community. Developed by Port Credit West Village Partners—a joint venture of DiamondCorp, Dream Unlimited, FRAM + Slokker, and the Kilmer Group—the project is replacing the former Imperial Oil Lands to the southwest of Lakeshore Road West and Mississauga Road with over 2,500 condominium units and over 400 townhomes, woven together with 18 acres of green space in a master plan by Giannone Petricone Associates and Urban Strategies. 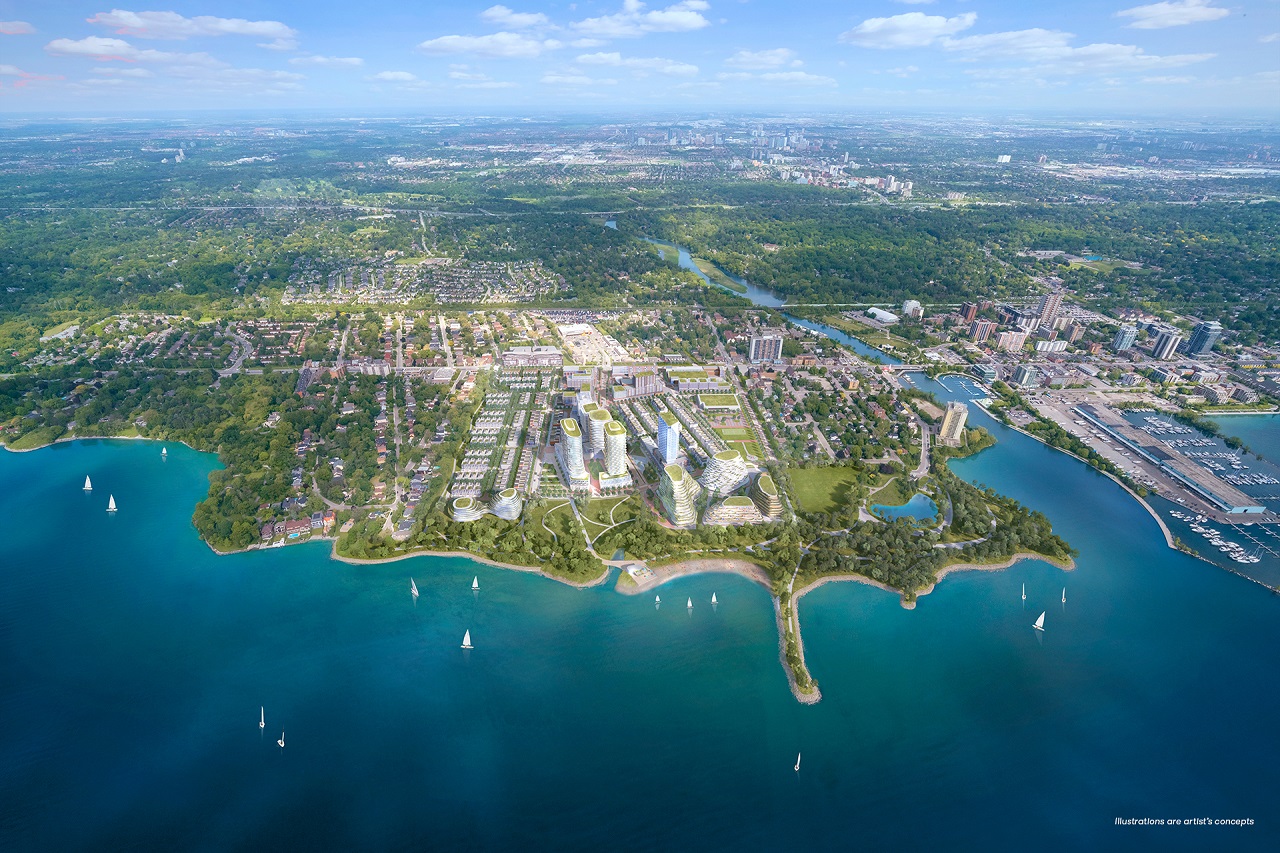 The initial buildings on the site—designed Diamond Schmitt Architects—include two condos that will form a gateway into the community along with a single-storey commercial building that will help extend the Port Credit retail strip westward. 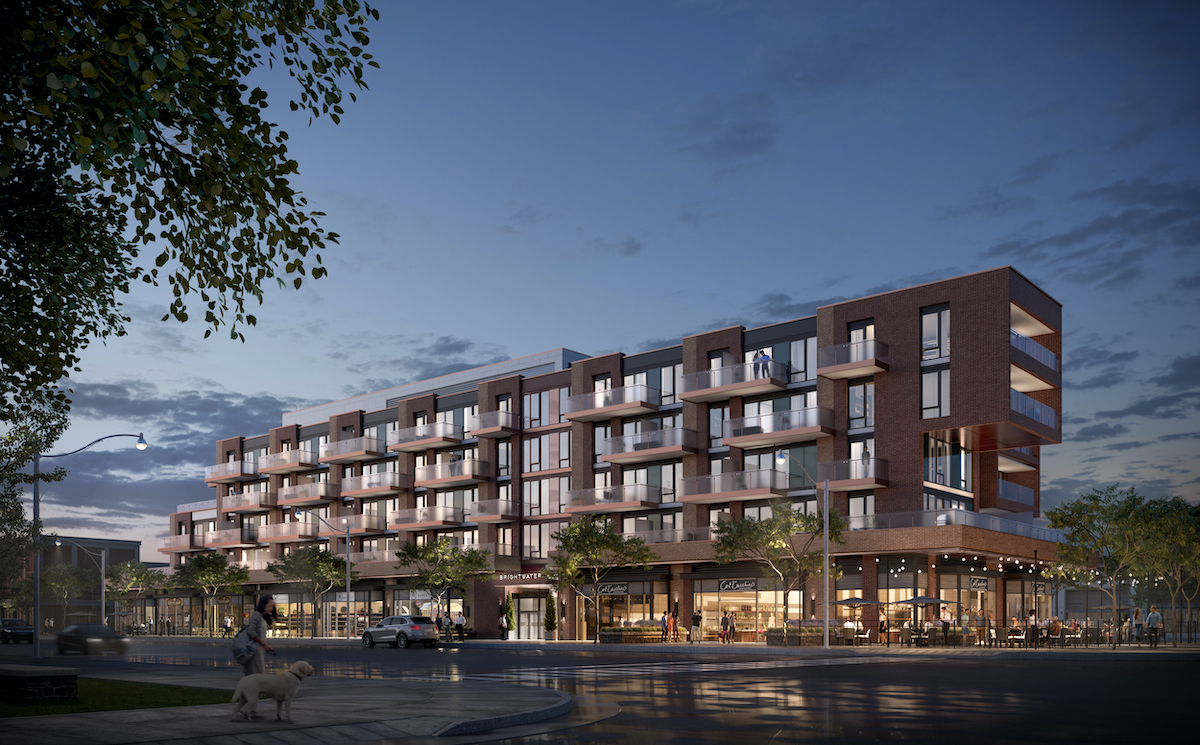 This first phase’s residential components include Brightwater I, a boutique five-storey, mixed-use building with 76 suits, and Brightwater II, a 14-storey mixed-use building with 235 suites. The footprint of the two residential buildings and one commercial building began excavation earlier in the year, and most recently, a tower crane was installed at the start of July alongside early forming work at the west end of the pit. An aerial view below shows early forming activity in the days before the crane was raised. 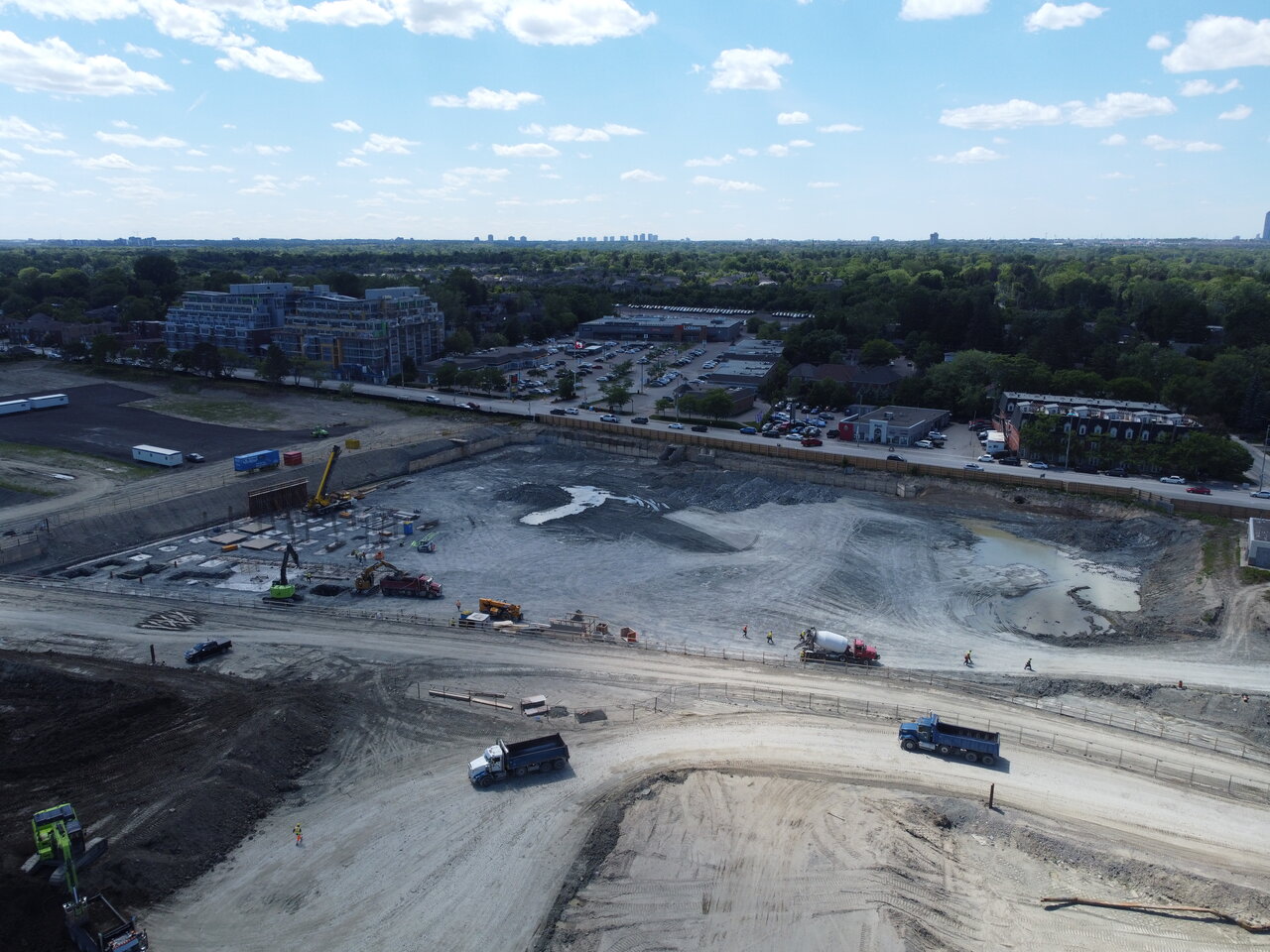 This initial forming activity for the first phase’s foundations and parking levels represents the first upward construction in the former brownfield site’s redevelopment. The early construction activity now unfolding follows an extensive soil remediation process that included, according to a Globe and Mail article, “a two-year site cleanup that removed 400,000 tonnes of oil-contaminated soil. A total of 16,000 truckloads of soil were hauled away.” 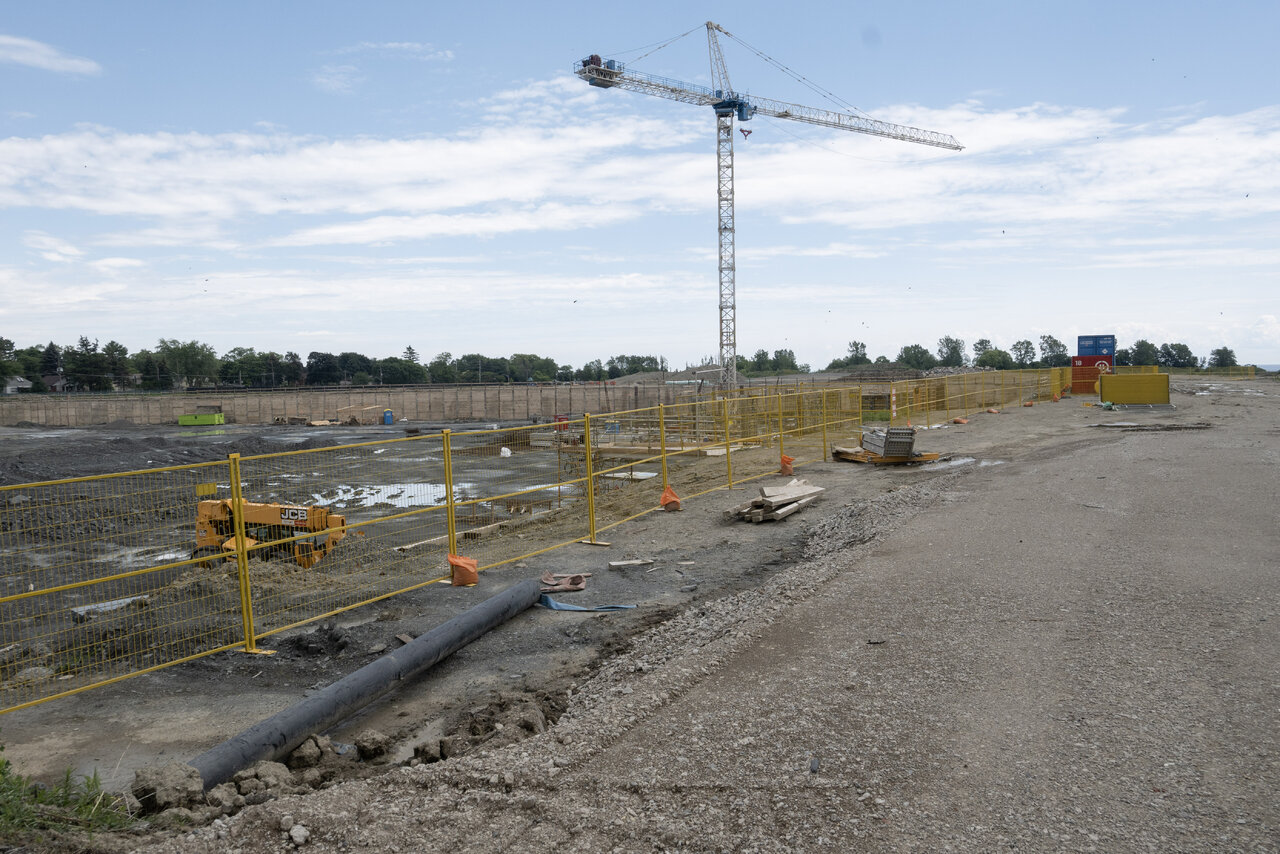 As the first phases continue their construction, marketing releases are continuing for new phases for the community. In the spring, we learned about Brightwater Towns, which will bring 106 luxury townhomes to the west edge of the community. Designed by superkül, these townhomes will act as a contextual buffer between the existing low-rise homes to the west and the new mid-rises and towers that will populate Brightwater to the east. The townhome phase will feature units ranging from 1,900 ft² to 2,600 ft² in area. 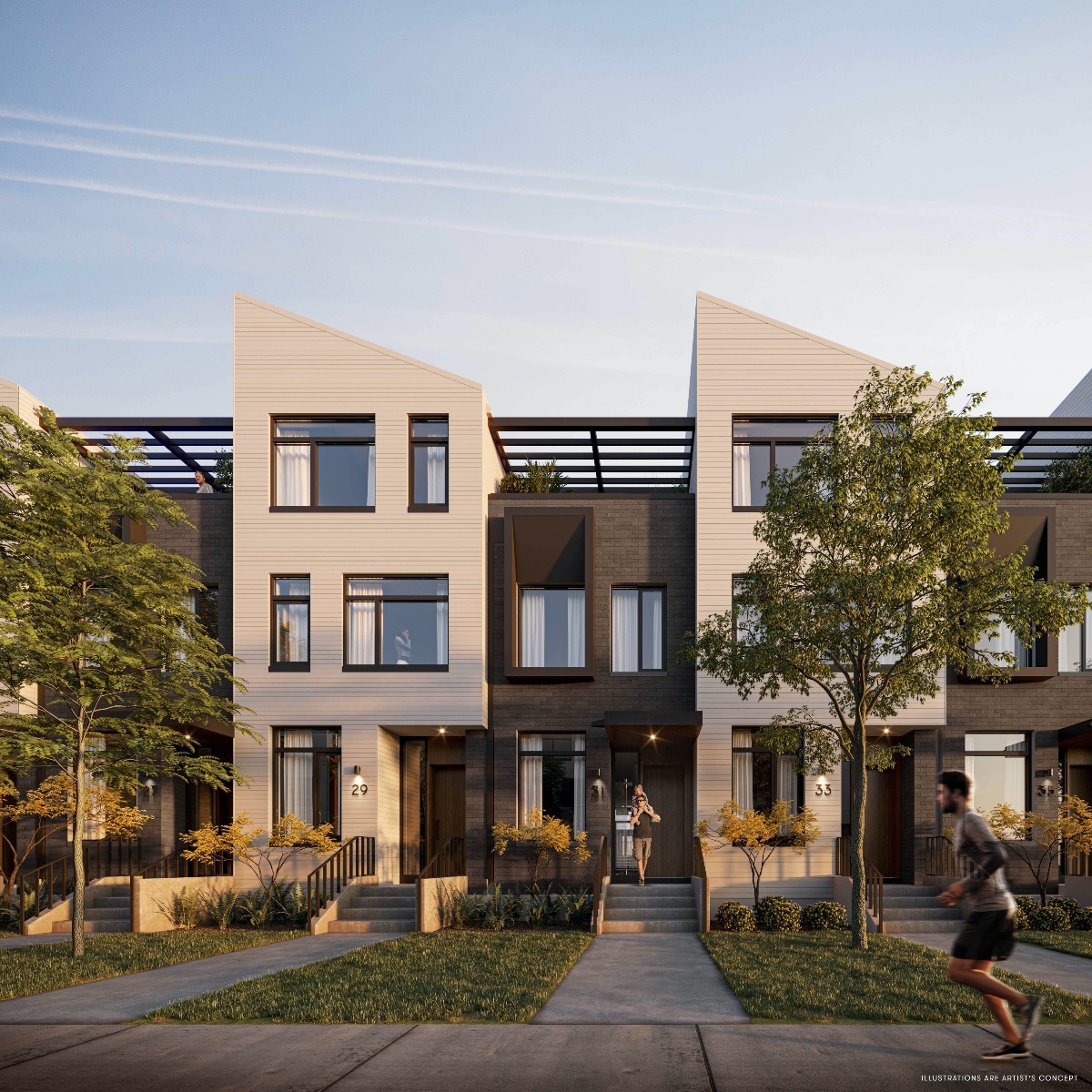 In June, marketing also kicked into gear for the next phase in the community known as The Mason. The latest phase is designed by architects—Alliance, bringing some architectural variety to the site as a nine-storey boutique condo. 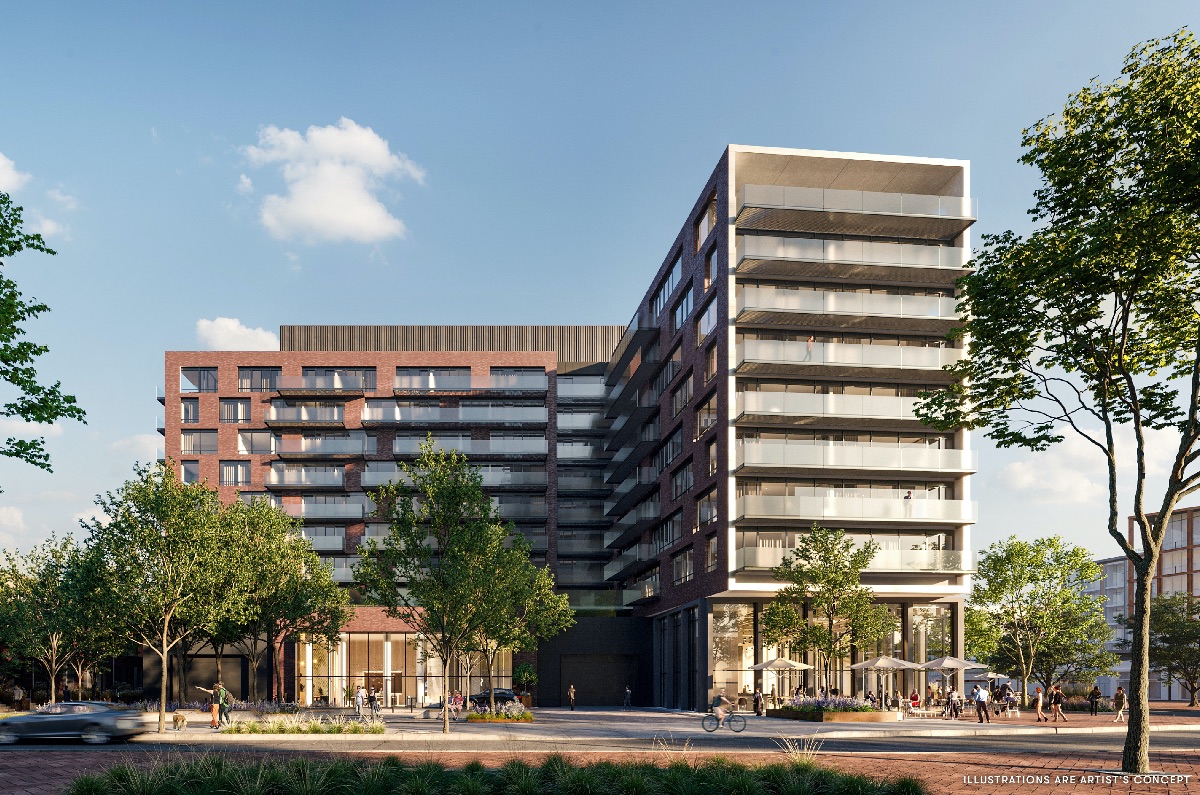 Additional information and images can be found in our Database file for the project, linked below. Want to get involved in the discussion? Check out the associated Forum thread, or leave a comment n the space provided on this page.