As work wraps up on the first phase at Hines and Ivanhoé Cambridge CIBC SQUARE office complex in Downtown Toronto, the early stages of construction are advancing on the second. Designed by UK-based WilkinsonEyre Architects with Toronto’s Adamson Associates, the first of the complex’s matched pair of towers—turned at near angles to each other—now stands 49 storeys tall over the northeast corner of Bay and Lake Shore. We recently covered the first phase’s newly-revealed artwork, today we’re back for a look at what remains to complete the first phase, and the work now underway on the 50-storey second phase. 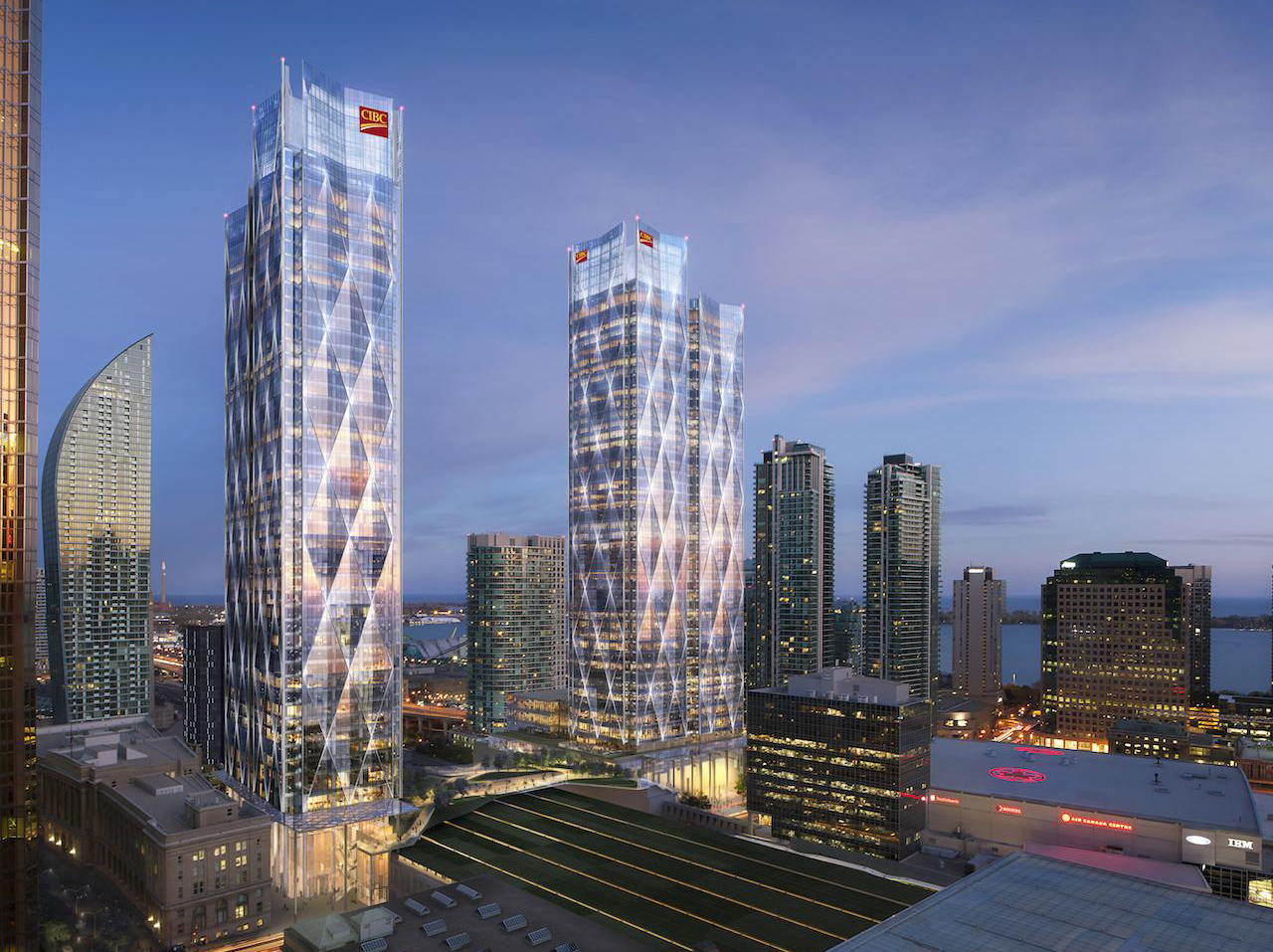 The slightly shorter South Tower at 81 Bay Street is soon to welcome its first tenants, with base building occupancy permits for both the low-rise and high-rise floors having been obtained respectively from the City in late March and early April. General contractors have moved out for the most part, and all floors have been turned over to the contractors who have been engaged to fit out spaces for the tenants. Move-ins will begin later this year. Some final elements of construction for the first phase are currently on pause, including amenity work and tenant fixturing work is suspended as per current provincial COVID-19 directives. Finishing work continues in other areas including the recently reopened Bay East Teamway, exterior landscaping, and completion of the garage ramp from Yonge Street. 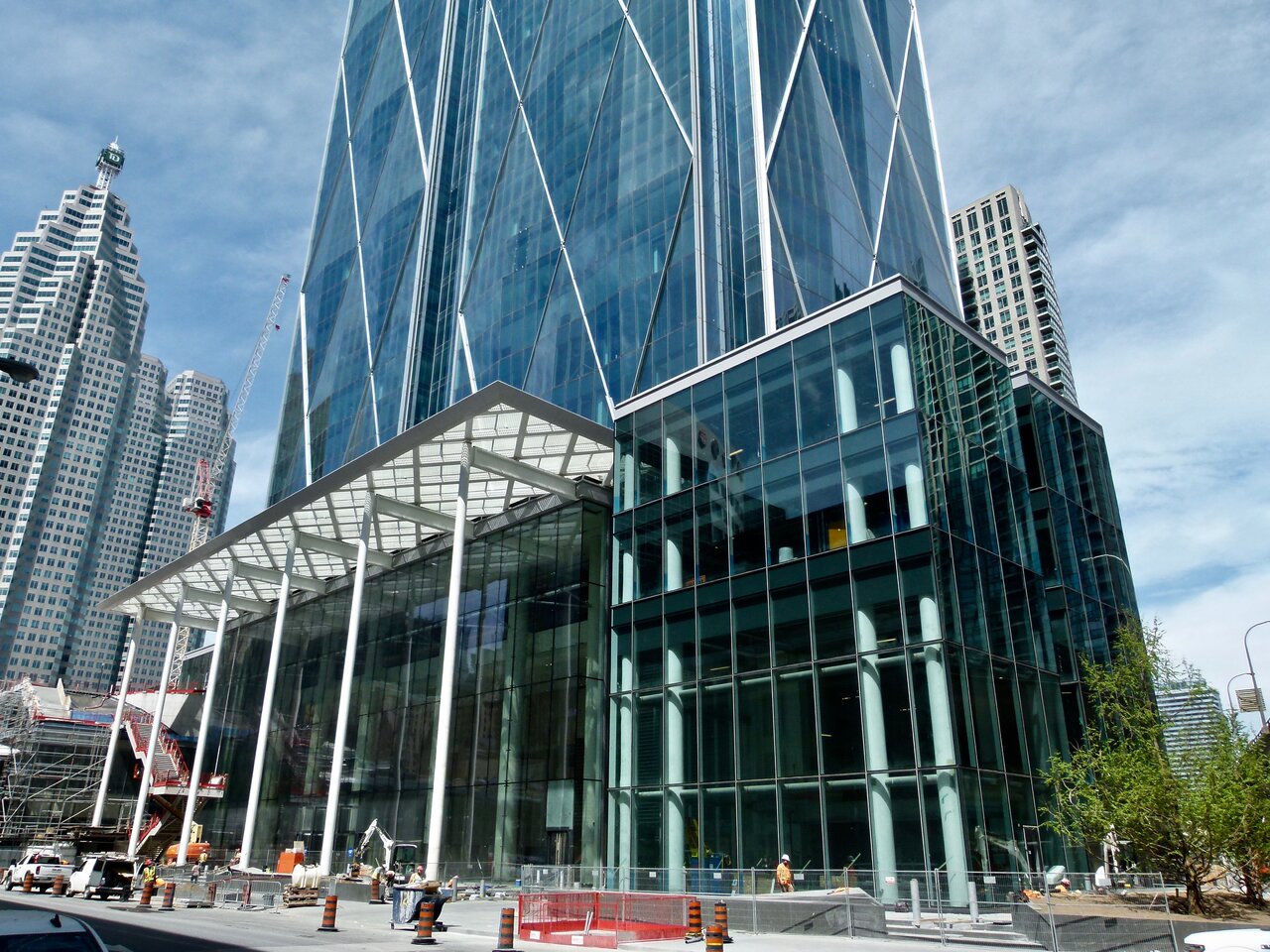 As the South Tower will be one of the first office developments in downtown Toronto to open since COVID-19 arrived, 81 Bay Street has been designed to accommodate the needs of tenants as they transition back to working from the office, including collaborative workspaces and a fitness centre with enhanced air quality measures.

Between the two phases, the complex’s rail corridor overbuild park is rapidly taking shape, with the portion closest to the South Tower set to open late this summer. 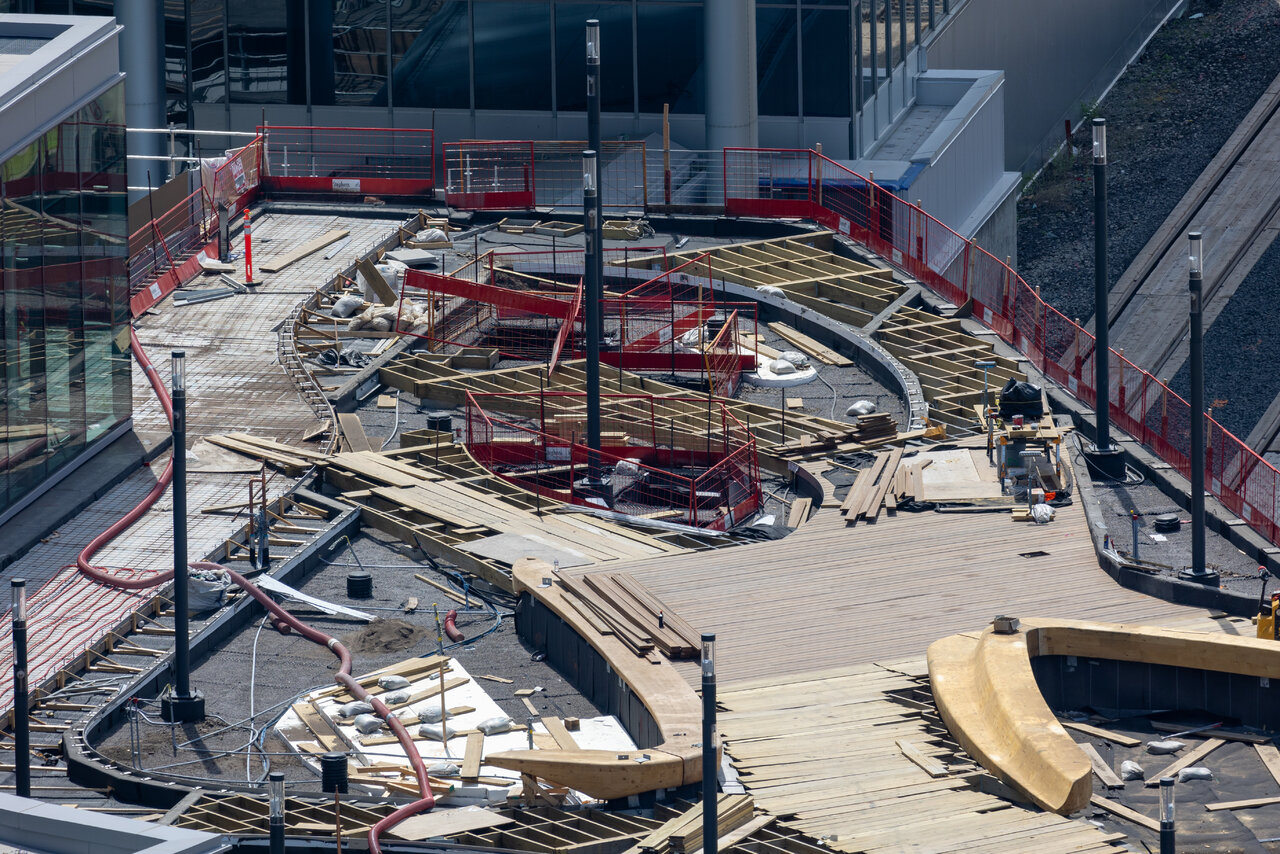 The portion of the overbuild park close to the North Tower is now well underway, with a tower crane recently installed atop steel decking, and crews extending the concrete slab with new pours as more of the decking is installed. 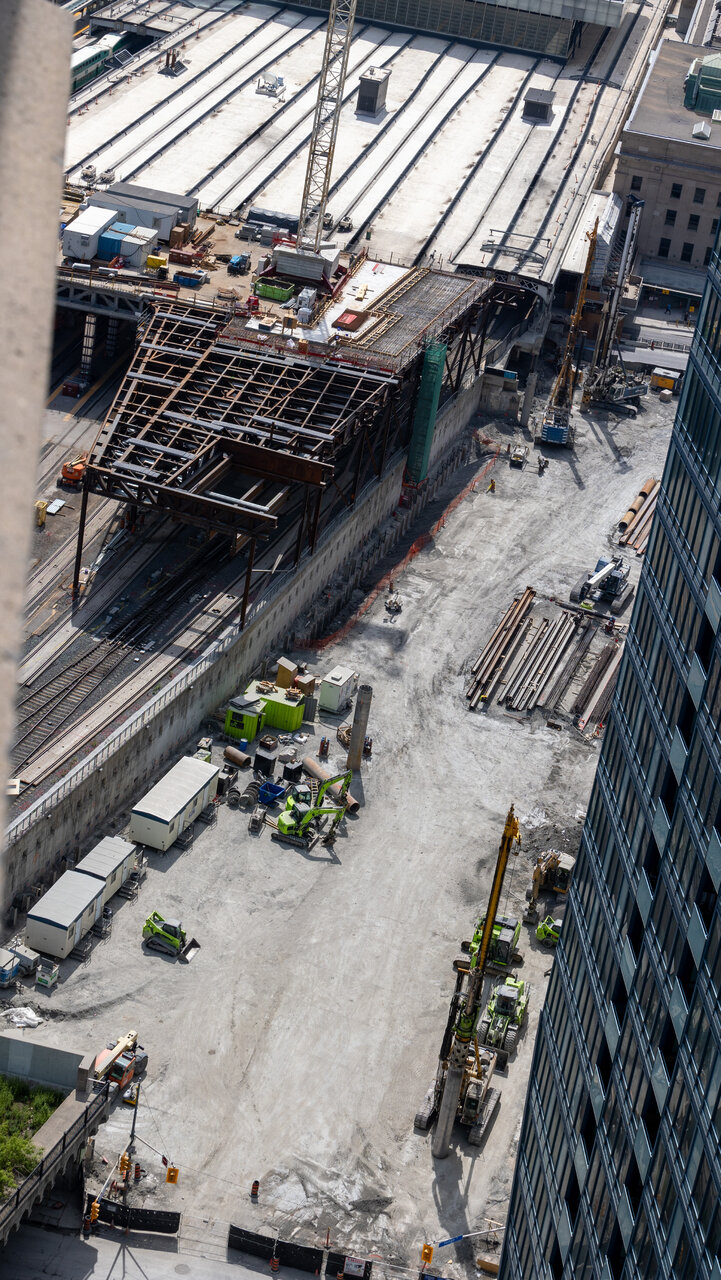 Across the tracks where the previous Union GO Bus Terminal was, early work is coming along for the North Tower. Shoring wall caisson drilling along the north, south, and west perimeters of the second phase’s footprint has cleared the way for the start of excavation, with remaining caisson drilling work is expected to wrap up in June. 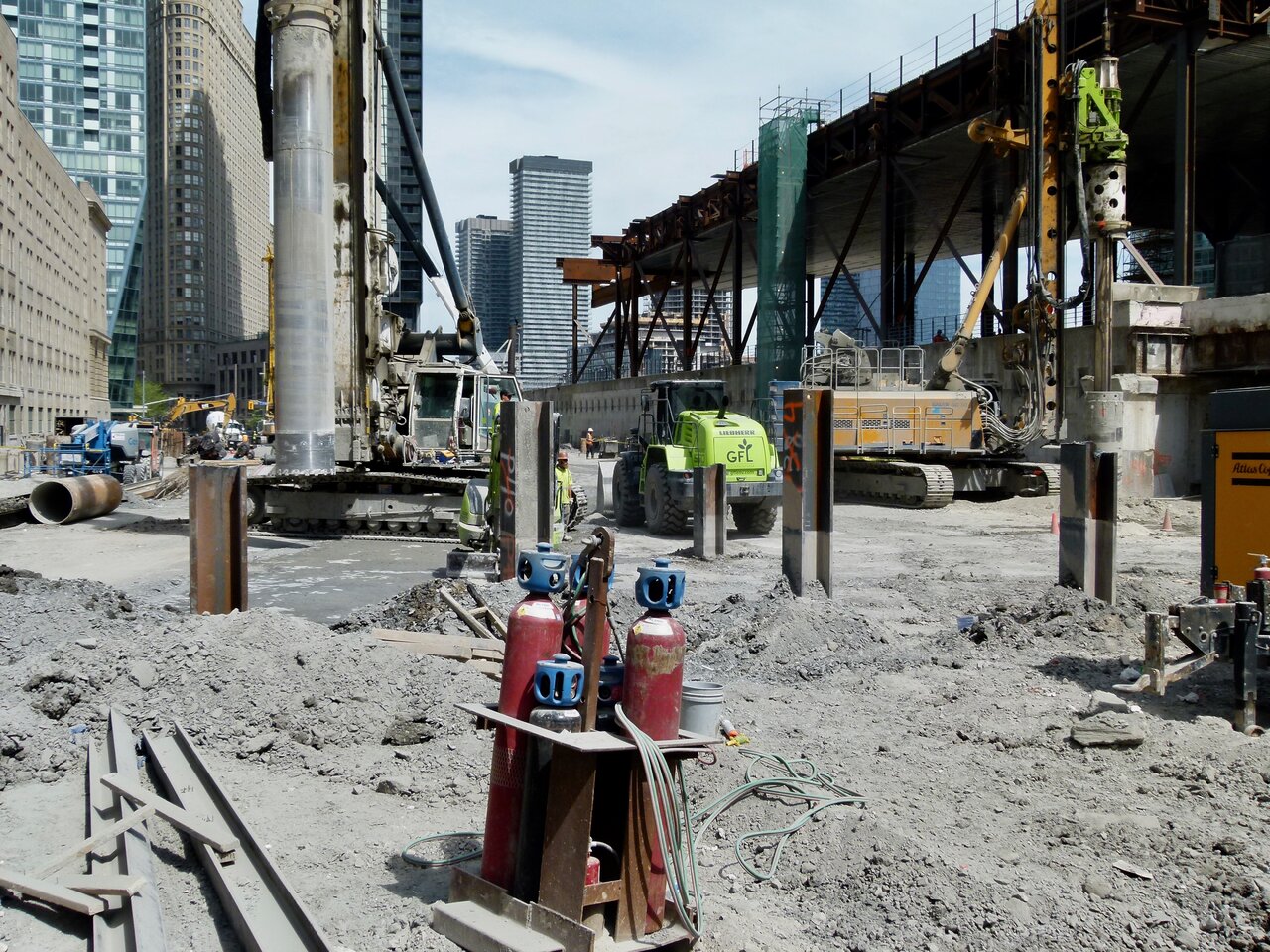 With the new Union GO Bus terminal located in CIBC SQUARE’s South Tower, and with a direct connection to Union Station via a new PATH bridge, those working later this year from new offices there will find they have easy commutes. Retailers in the PATH system—who took a major hit during the pandemic—will be eager to serve vaccinated office workers as they return, rejuvenating downtown at the same time.