For many residents of the West Don Lands, and those who care about the built heritage of Toronto generally, January and February of this year were a bit of a rough ride as a crew began demolition work on the Dominion Foundry at 153 through185 Eastern Avenue near River Street. The four Victorian industrial buildings of the Dominion Foundry Complex, all owned by the Province, are all listed on the City of Toronto’s Heritage Register and would, if they were privately owned, face restrictions on their development. Under provincial ownership, however, the City has no power to compel the Province to abide by the lower tier government’s rules. 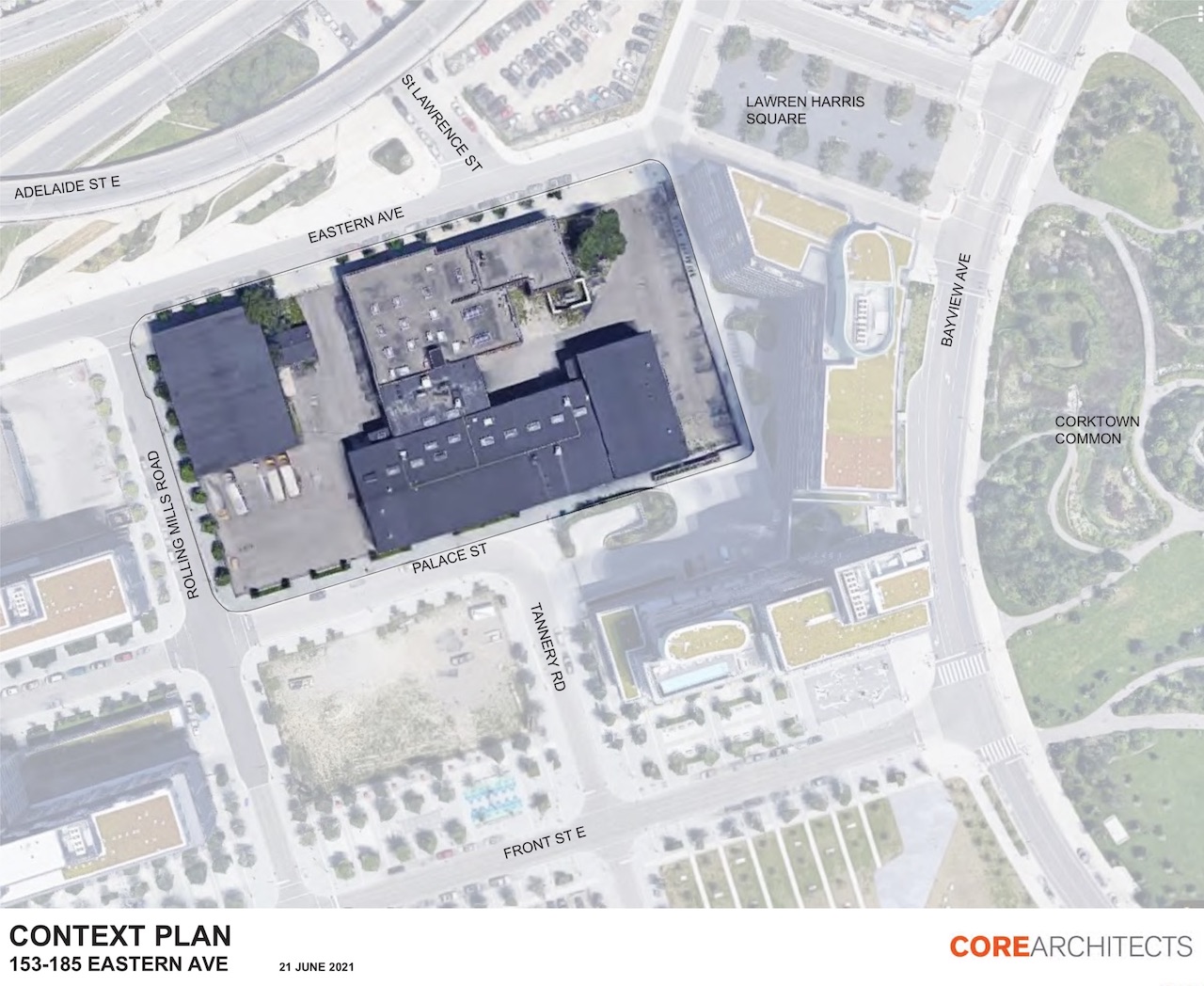 Context plan for the Dominion Foundry Complex within the West Don Lands, image by Core Architects

Public reaction to the demolition, however was swift and steadfast with protesters showing up to block further demolition and then pressing for action to stop the destruction for good. Ward 13 Councillor Kristyn Wong-Tam took up the cause immediately and City Council generally and Mayor Tory specifically were soon on board. The St. Lawrence Neighbourhood Association filed an injunction to stop the demolition of the heritage buildings on January 21, while the City call for a plan to safeguard the heritage buildings in any redevelopment. On January 22, the Province paused the demolition, calling it a “good faith measure,” while declaring that the site was required for affordable housing. Rumours swirled that the property had already been sold to buddies of the Premier, but the Province denied that it had sold. On January 29, with the City a party to the court application and a participant in the proceedings, a temporary court order was obtained that prohibited further demolition of the site. A few weeks later the temporary order was upheld.

Now, following months of work behind the scenes, the City of Toronto and the Province of Ontario have announced an agreement in principle regarding the complex. Today, the Province released a Cultural Heritage Evaluation Report and a Heritage Impact Assessment (HIA) along with a vision of redevelopment for the property. In the agreement, the Province commits to conserving the cultural heritage value of the property, while still providing for affordable housing. The vision no longer includes wholesale destruction of the buildings, but saves most exterior walls, some interiors, and provides for towers to be built above while creating new public space at ground level.

Ideogram of the Foundry site, design by Core Architects

A statement issued by the City today proclaims that “The Province and the City have committed to ensuring that any Purchaser of the Property respects the vision for redevelopment of the Property, as outlined in the HIA. The City and the Province are committed to ensuring that any future purchasers of the property respect the vision for its redevelopment. In the event that the property becomes privately owned, the City has the option to designate it under Part IV of the Ontario Heritage Act, as well as having the future owner enter into a Heritage Easement Agreement (identifying elements of the buildings that must be retained and what changes and types of development may be allowed), as a condition of future planning approvals.”

Included with the documents today are architectural concept studies that show which heritage structural elements could be saved while new buildings that contain the amount of residential space that the Province wants to see built here could be inserted into the site. The renderings present concepts only, and do not represent completed architectural plans.

Looking north to restored windows at the Foundry site, design by Core Architects 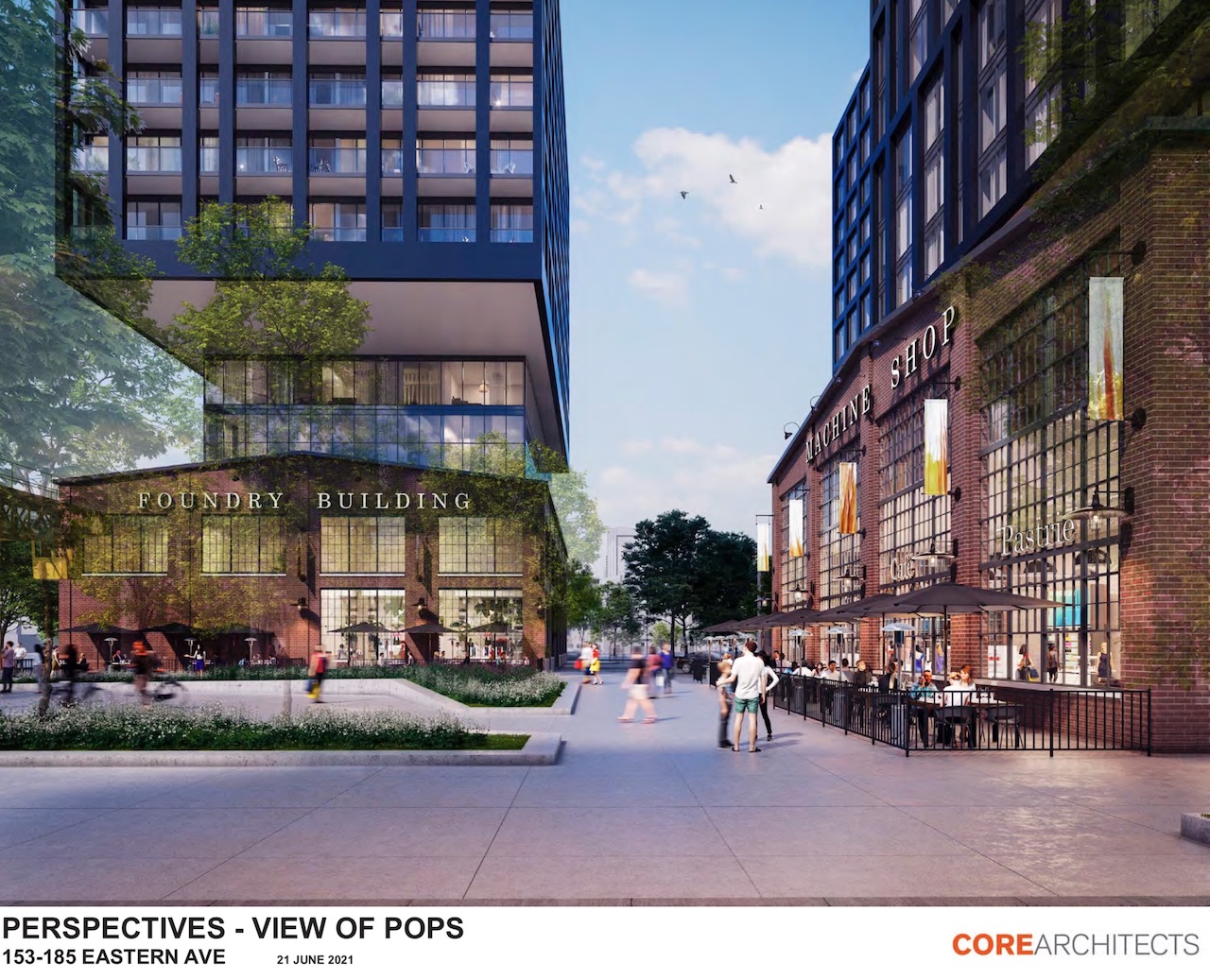 Looking north to the POPS Concept at the Foundry site, design by Core Architects 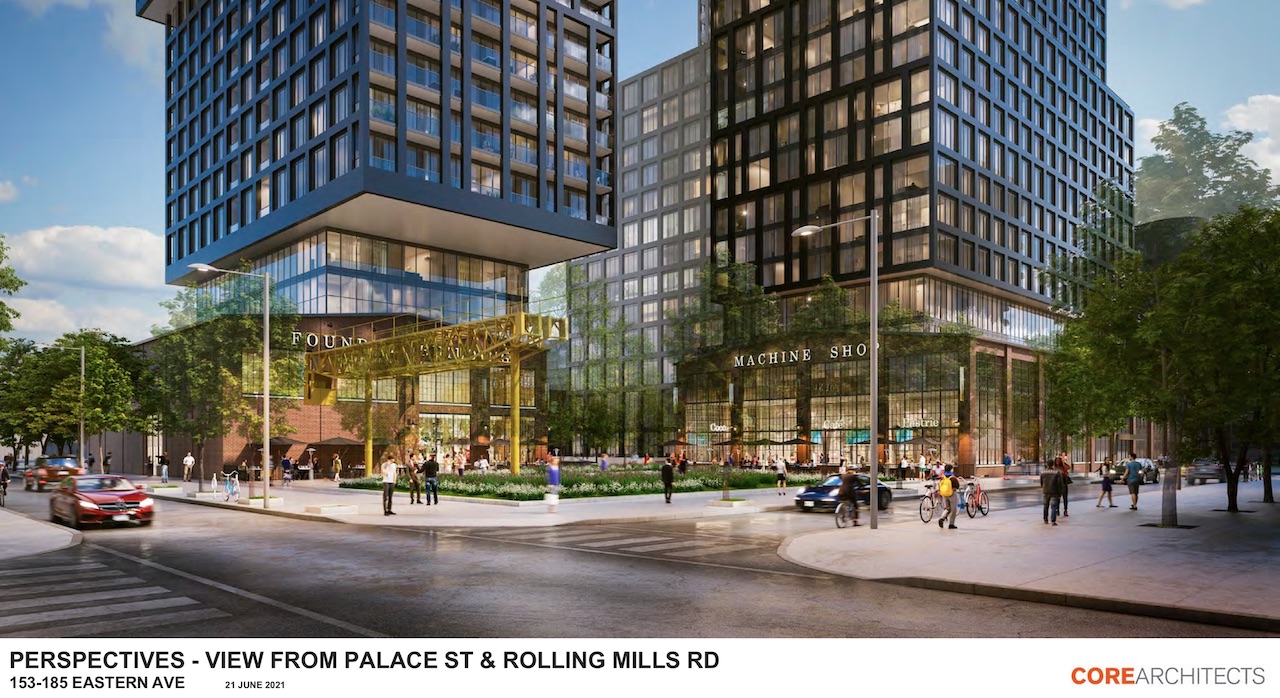 Looking northeast to the POPS Concept at the Foundry site, design by Core Architects 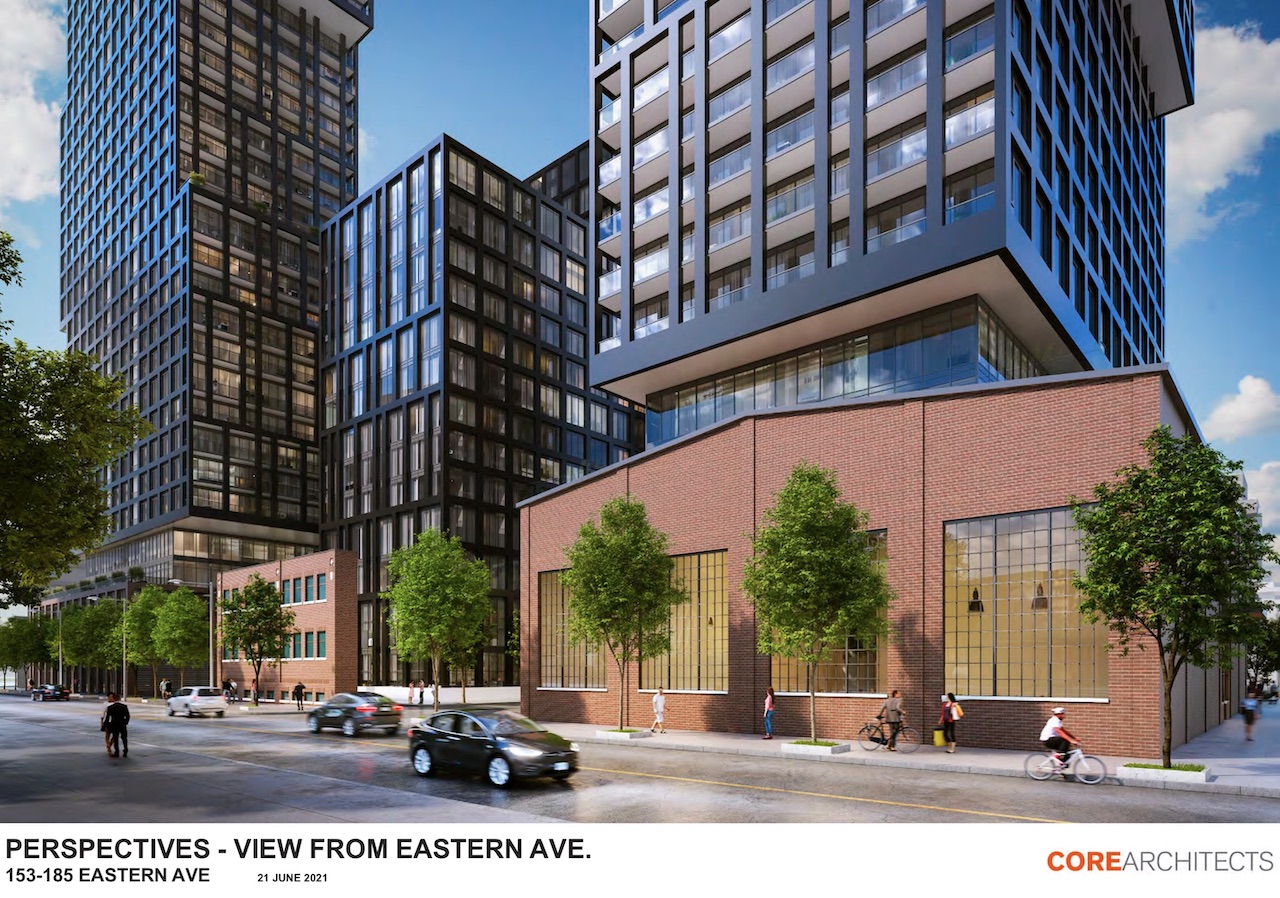 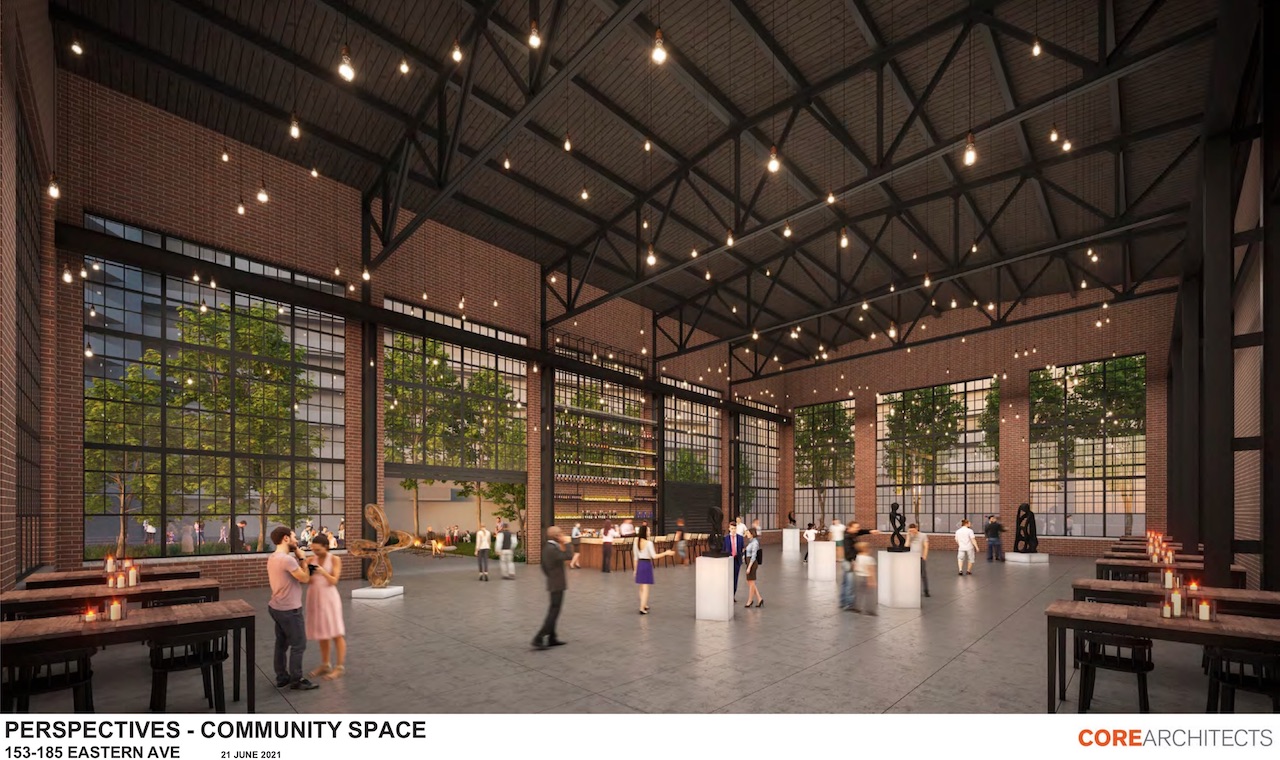 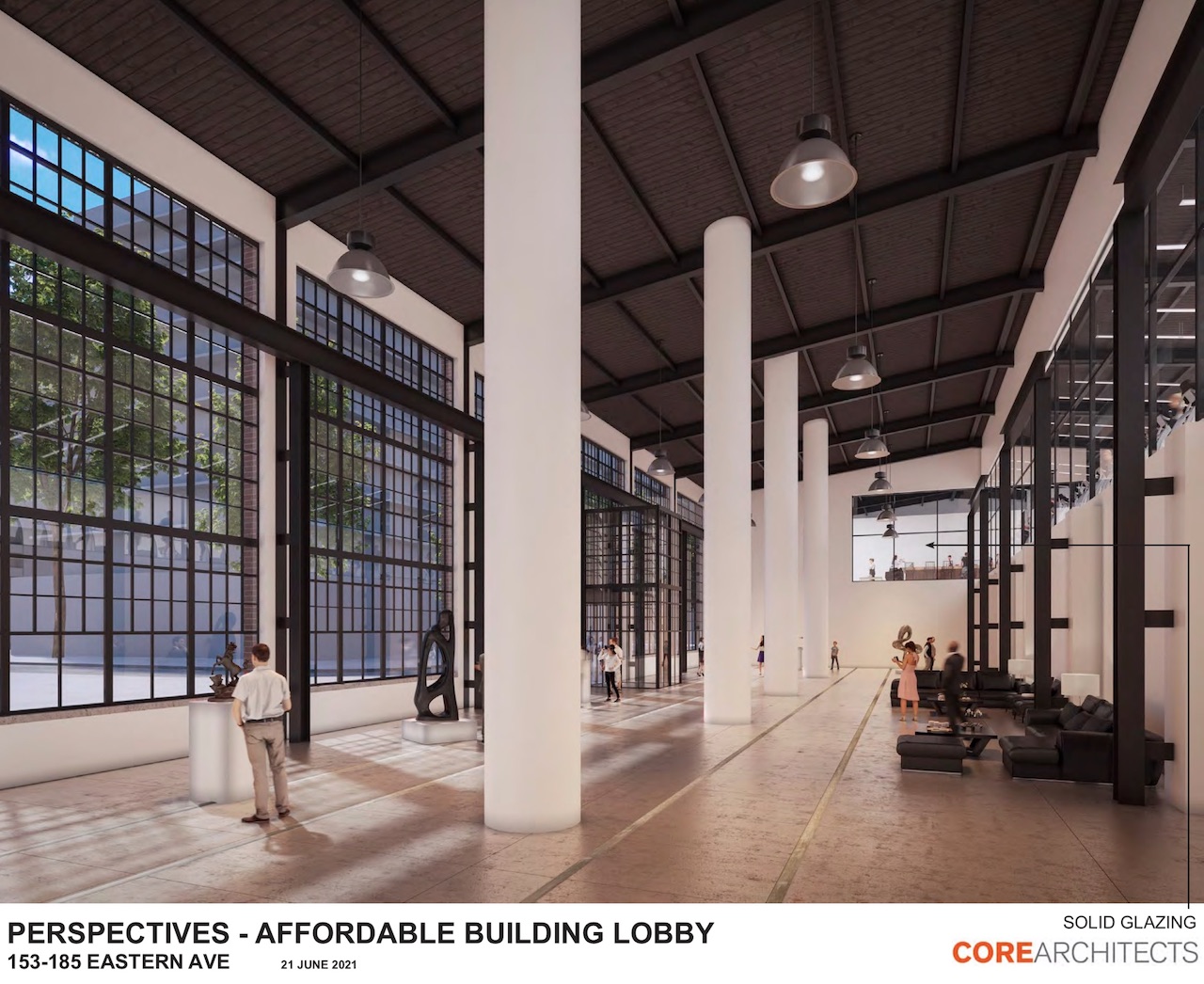 Lobby of the Affordable Housing building at the Foundry site, design by Core Architects

Mayor Tory released a statement with the announcement, saying “I want to thank the local community, City staff, and the Province for working together to come to a much better outcome for the future of the Dominion Foundry Complex. The Province has committed to conserving the cultural heritage value of the property and has taken into account feedback from the community and the City of Toronto. This path forward has ensured the outcome that I always had hoped could be achieved here—we ensure more affordable housing is built and at the same time address community concerns around heritage and public consultation. I want to again thank the local community and all those who raised concerns for standing with the City to help protect this site.”

The Province’s Cultural Heritage Evaluation Report can be downloaded here, while the HIA is available at this link.

We will keep you posted as the plans evolve, but in the meantime, additional information and images can be found in our dedicated Forum thread for the project where you can also get in on the discussion, or you may leave a comment in the space provided on this page.