Cladding a Standout as Mirvish Village Continues To Grow

The Honest Ed’s discount department store used to stand on the southwest corner of Bathurst and Bloor streets in Toronto, and around the corner on Markham Street were the quaint converted Victorians that made up Mirvish Village. While those former houses are still there awaiting yet another rebirth, a new Mirvish Village is growing on the site. With this block of Markham Street closed to the public for the moment, work is proceeding to retrofit and restore the Victorians into the expansive redevelopment being built around them by Vancouver-based Westbank Corp and Peterson, with six cranes now raising what looks to be many buildings in a multi-peaked skyline along Bloor and Bathurst. The number of buildings going up here is an illusion; while there appears to be around a dozen new buildings going up on each of the two main streets, in fact there are only five major new buildings on the site, interconnected at their base, with each boasting stepped peaks. The effect of many more buildings than that is being achieved through varying cladding treatments that visually break each building into side-by-side siblings, even if behind the facade the hallways connect through. Designed by Vancouver’s Henriquez Partners Architects working with Toronto’s Diamond Schmitt Architects, the complex’s towers will rise 13, 19, 24, 25, and 26 storeys tall at their peaks, while the restoration of the lower-rise Victorian buildings of Markham Street into new shops and restaurants are being overseen by heritage specialists ERA Architects. All suites at the site will be rentals, with no condos here. In early 2020, the project received a significant funding injection of $200 million in financing from the federal government, allocated to ensure that over a third of the complex’s rental units will be offered at affordable rates. In total, the new buildings will house 916 residential rental suites, plus over 225,000 ft² of retail, office, and community use spaces at or near ground level. New public green spaces are also coming along with many public realm enhancements, including a sheltered market area. 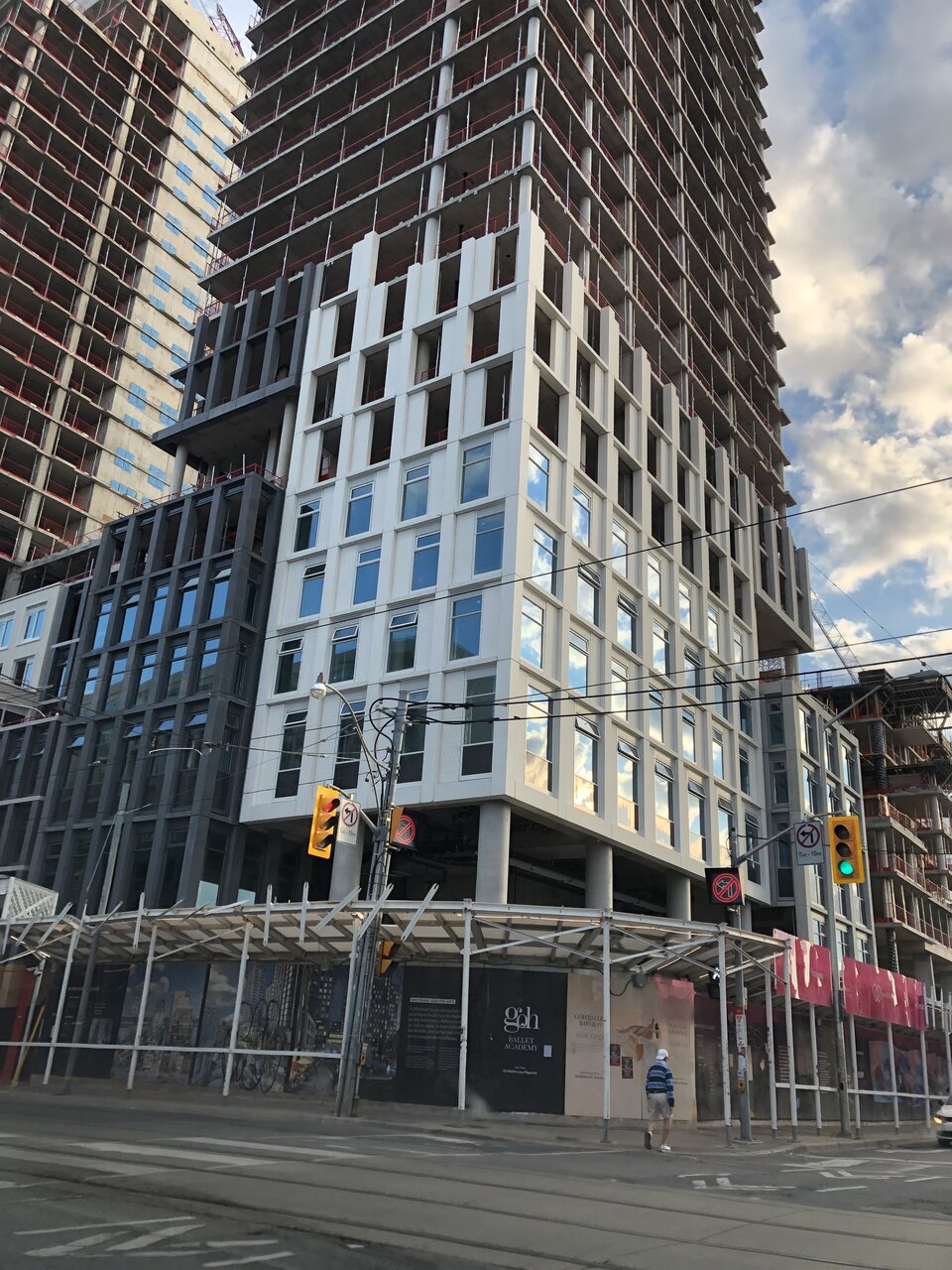 Staggered windows and diamond patterned precast mark the building at the corner of Bloor and Bathurst, image by UT Forum contributor ProjectEnd

After the hoarding comes down and everything is finished up over the next year and some months, lights will shine on white diamond patterned precast on the signature corner building, the first renters will move in, and the public will be able to explore what could be a new Toronto landmark community.