Six months after the arrival of the first in a series of strikingly designed new bridges for Toronto’s Port Lands, the second of them has been delivered. A part of WaterfrontToronto’s Port Lands Flood Protection project, the Commissioners Street Bridge will reconnect two ends of that street, currently severed while a new river valley is carved through the Port Lands.

Bridge making the transit through Ship Channel, image via @TheRockRipper/Twitter

Like the Cherry Street North Bridge that arrived last fall, the Commissioners Bridge is designed by Entuitive, London-based Grimshaw Architects, and SBP. Unlike the Cherry bridge which spans the concrete-lined Keating Channel, the Commissioners Street Bridge will cross the new naturalized Don River Valley before the waterway curves west and terminates in a naturalized mouth, part of the wider Port Lands Flood Protection project. 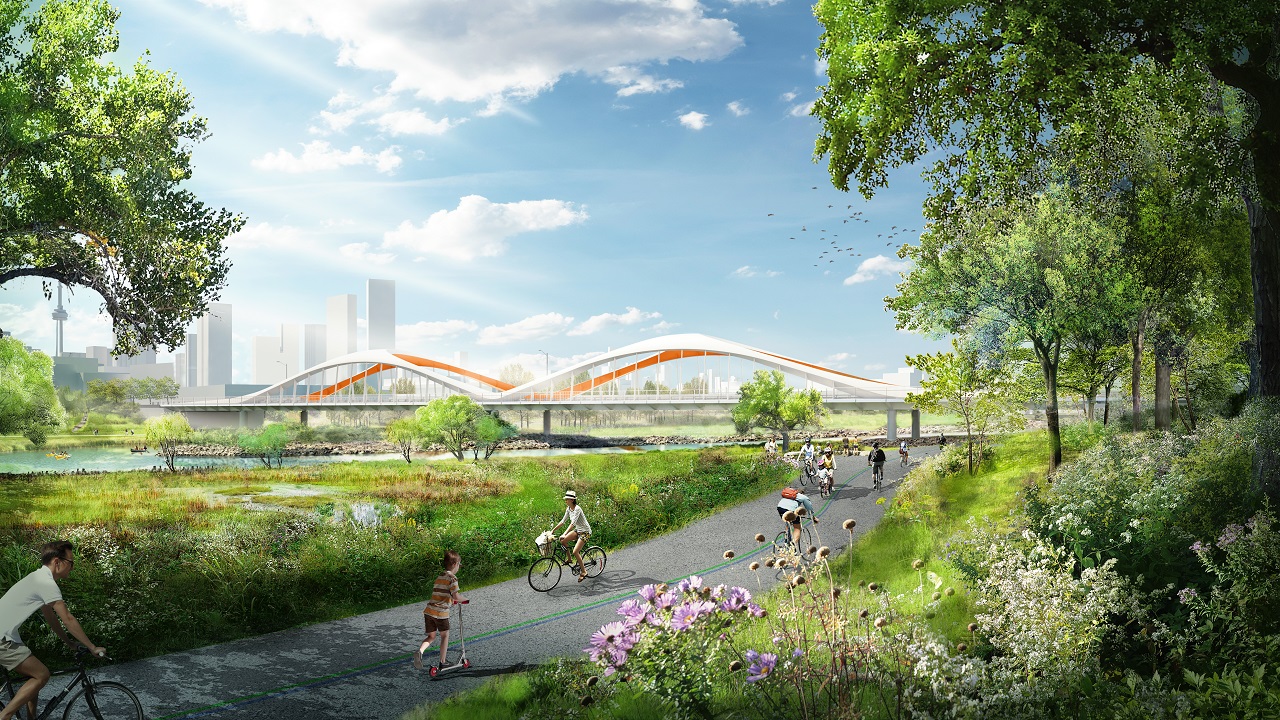 The initial sections of the valley are now being excavated to the south and west of the bridge’s future location, indicated in pink, below. 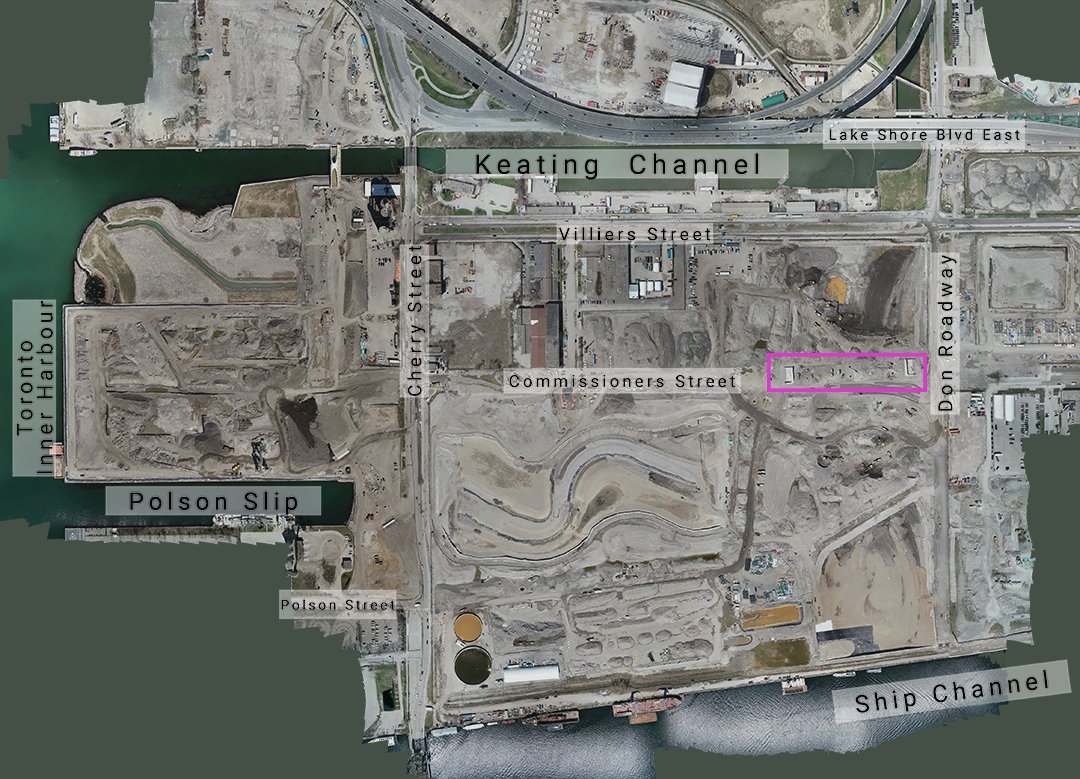 Site of the new bridge, image via Waterfront Toronto

Being the longest in the group of four matching bridges for the Port Lands, the Commissioners bridge is being delivered in two spans. It was the western span that arrived this week, sent via barge from Dartmouth, Nova Scotia down the St. Lawrence Seaway, and arriving in the Port Lands via the Ship Channel. Anticipation had been building since the bridge departed Nova Scotia on May 4th, with Waterfront Toronto holding a contest to guess the bridge’s arrival time in Toronto. 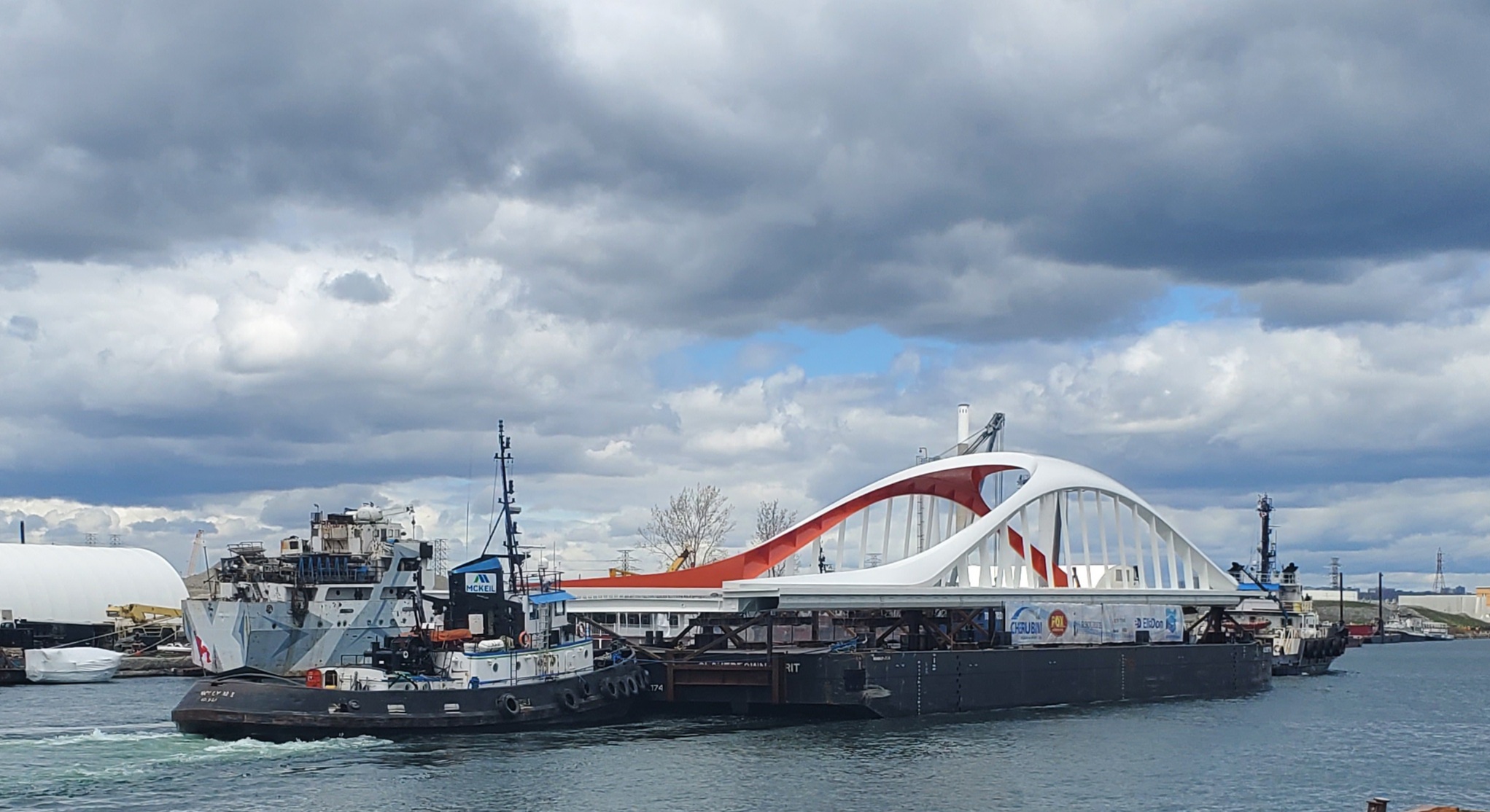 Bridge making the transit through Ship Channel, image via @TheRockRipper/Twitter

This half of the bridge weighs 650 tonnes and measures 83 metres in length, and will be connected with the future east span for a full length of 152 metres. 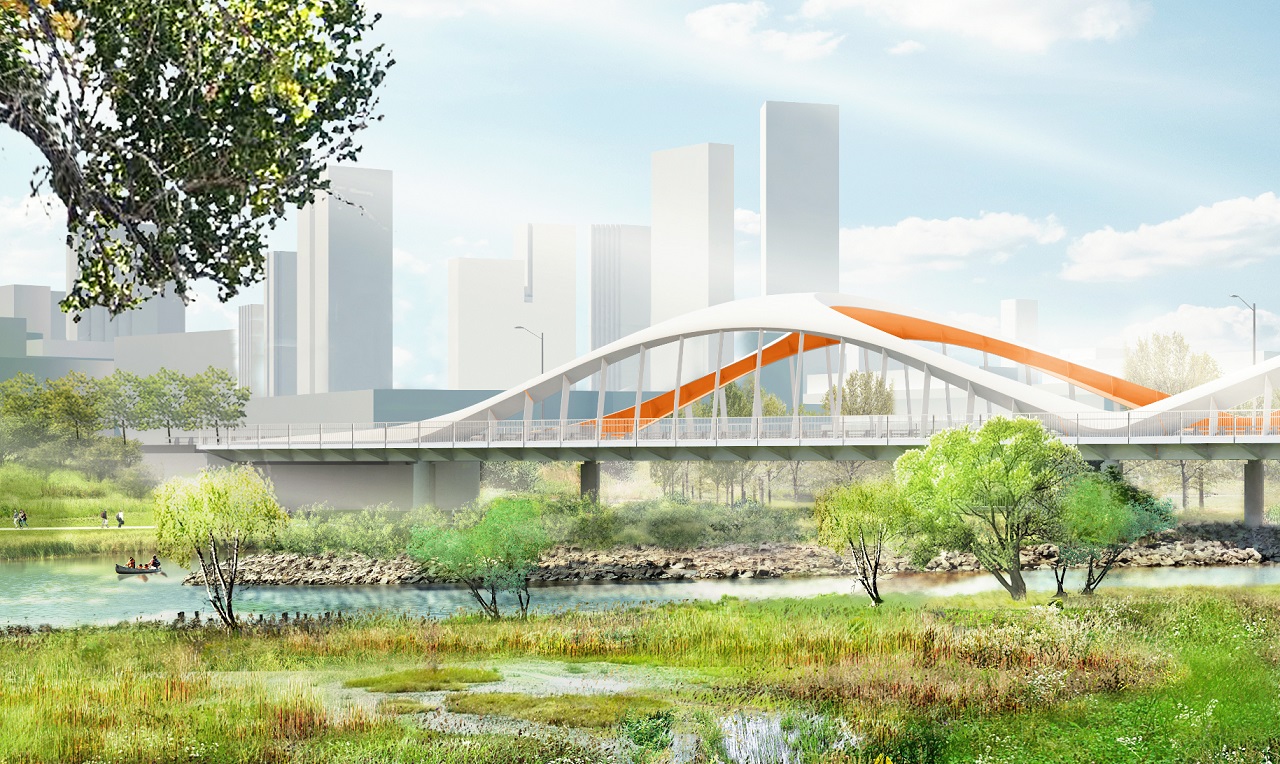 First, the western span must be moved into position. While the Cherry North bridge was able to be floated to its final location upon delivery, the river valley that the new Commissioners Bridge will span does not yet exist. The final 350 to 400 metres of this journey will be an overland trip, and crews have already prepped a temporary haul road leading from the Ship Channel to the bridge’s final location. 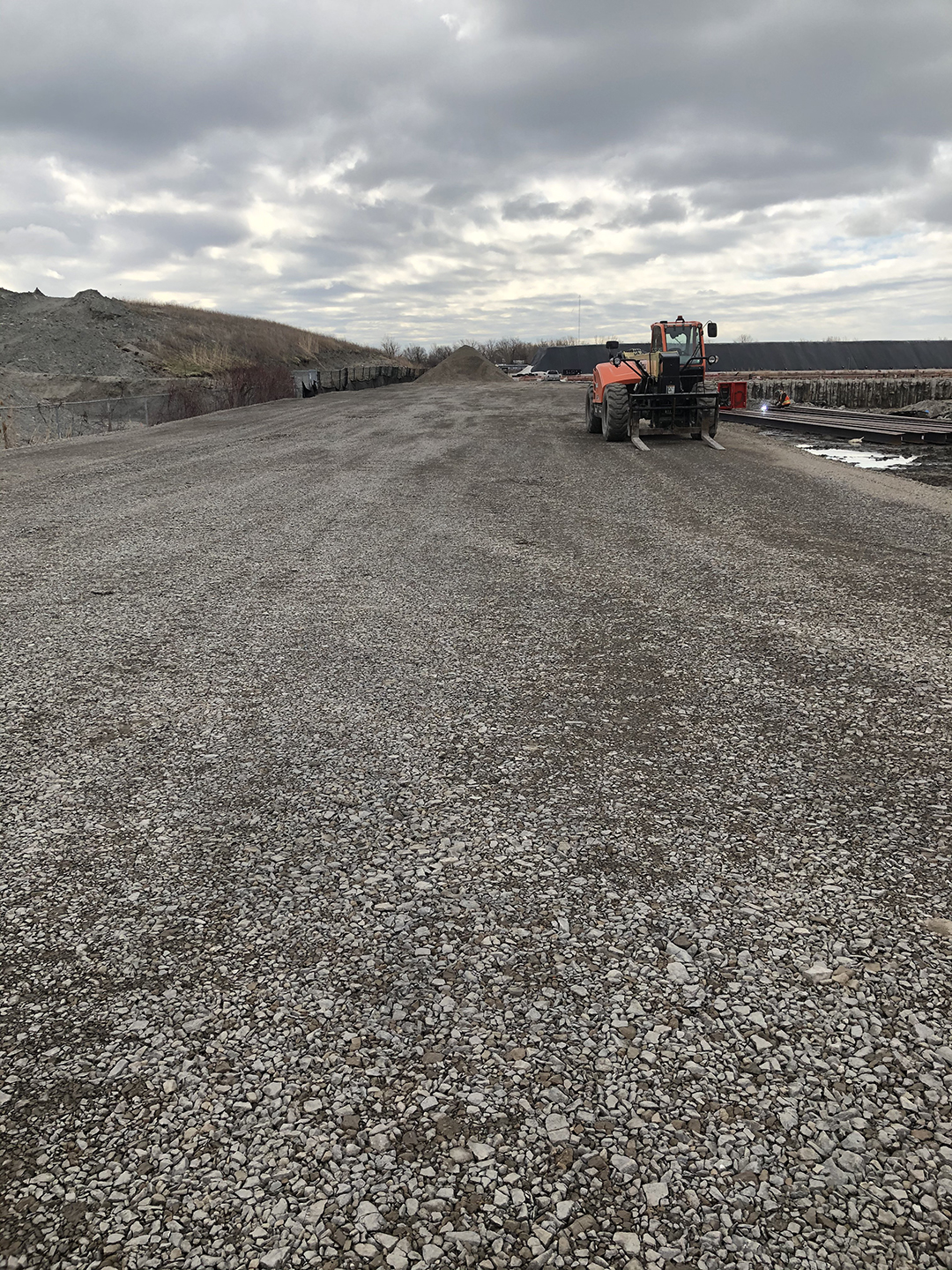 A video recently released by Waterfront Toronto illustrates the full construction timeline for the Port Lands Flood Protection project. The current phase of work is highlighted at around the 2:40 mark of the video, which shows that both bridge spans are expected to be in place before the section of the river valley below is excavated.

Meanwhile, the next steps are already in motion, with bridge foundations being installed to support the new structure. 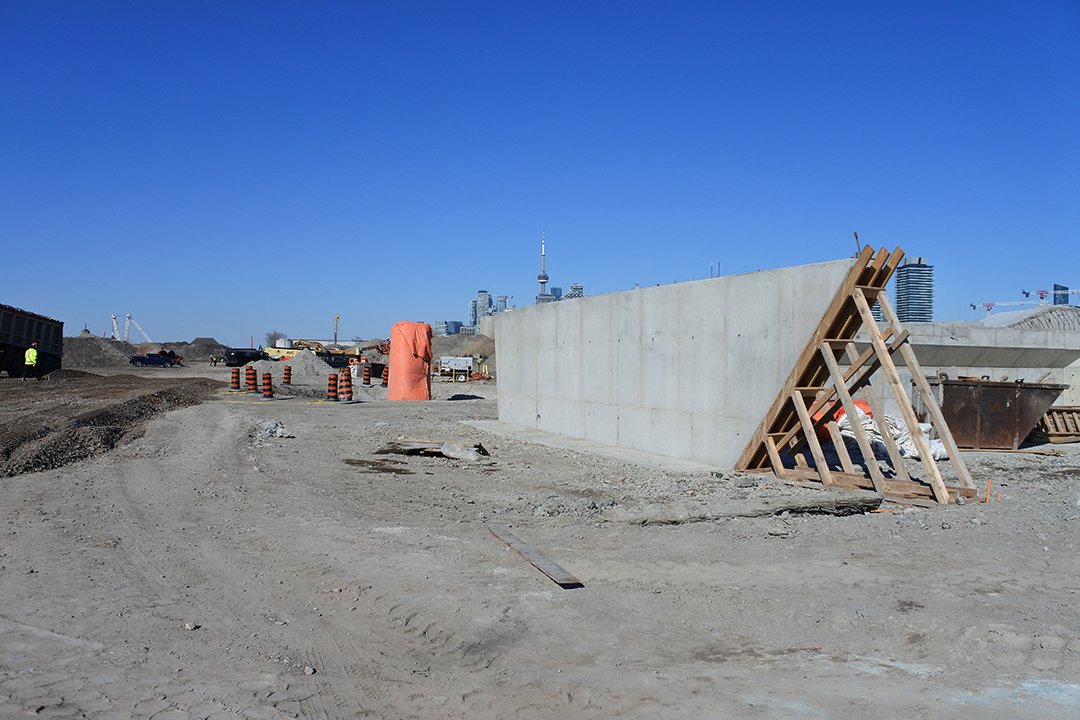 Want to get involved in the discussion? Check out the associated Forum thread, or leave a comment in the space provided on this page.