Every once in a while, a rare opportunity presents itself in Toronto where a prime location on top of a subway station becomes available for redevelopment, the ideal site for density and public realm improvements that brings a host of benefits. One such opportunity is making its way through the planning process at 334 Bloor Street West, located on the northwest corner of Bloor and Spadina. Here, a proposal was submitted in 2020 for a 35-storey mixed-use residential tower on the site, which includes a new and improved entrance to Spadina subway station. The development was presented before the Toronto Design Review Panel for the first time in June, 2021, where it did not find a very warm reception. 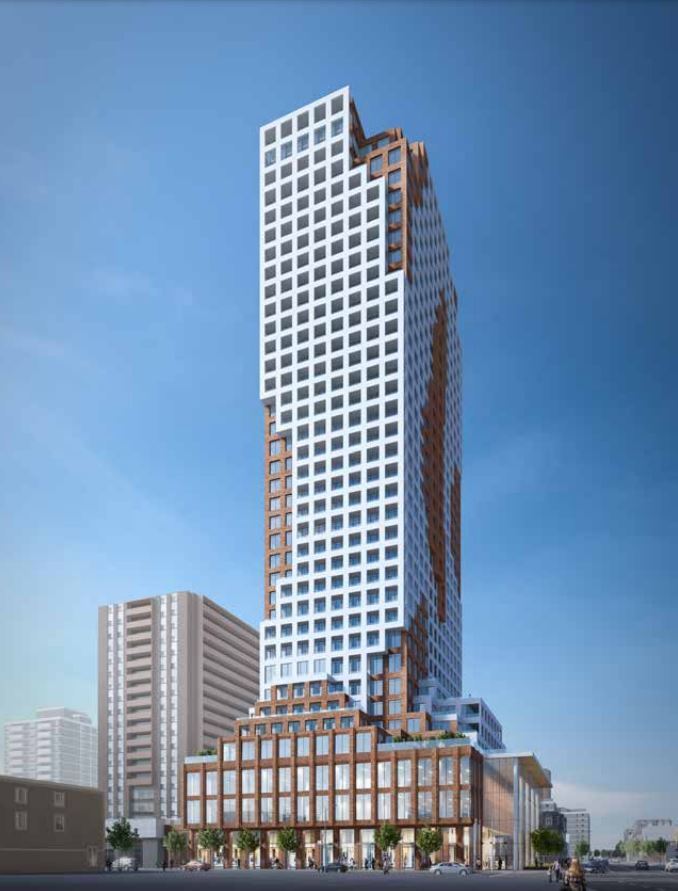 Rendering of 334 Bloor West, image via submission to the City of Toronto

Designed by IBI Group, the tower would replace a surface parking lot and three existing buildings on the property; a 3-storey residential building with grade-level retail right on the corner, a 6-storey office tower to the west, and the entrance pavilion to the subway station to the north. Existing site context, image via submission to the City of Toronto

The ground floor is proposed to contain retail along Bloor, with an ‘urban living room’ on Spadina housing the entrance to the TTC station. The urban living room is envisioned as an indoor publicly-accessible civic space that expands the public realm and could host a variety of activities and uses. Within the 3-storey podium would be two floors of office space, replacing the existing office space on the site. Above that, 404 residential units are proposed, including 24 rental replacement units. (Note that in the ground floor plan below, the demising walls for the retail units are not shown, as it is too early in the design process to determine the number and size of retail units needed). The design of the proposal has been tweaked since its first submission based on community feedback. The massing has been refined to minimize the impact on the townhouses to the north of the property, and the design team has sculpted the building to try to break free of the typical tower-and-podium form with a series of cascading terraces blending the tower into its base. The erosion of the massing is carried up the tower to its peak, with portions of the rigid white-clad grid chipped away to reveal brown brick recesses. Building section showing subway access, image via submission to the City of Toronto

There were some aspects of the project that the Panel were really excited to see. They agreed that this corner needed some improvement and was appropriate for development, and were pleased to see significant density proposed for such an important landmark site in the city. They were also really encouraged by the ambitions of the design team, namely the expansion of the public realm and the idea of providing a civic space to celebrate the entrance to the transit station. However, the Panel largely felt that in its execution, the design fell short of these ambitions in several respects. Rendering of the Bloor streetscape, image via submission to the City of Toronto

First, the Panel felt that the massing of the building was a bit too big and bulky. They pointed to the 850 m² tower floor plates, which increase to residential floor plates of 1100 m² in the podium, as being too large and contributing to an overall impression of bulkiness for the tower. They suggested that the building could be slimmed down to lessen its impact. The Panel did, however, approve of the height of the building, as it did not impede the protected view corridor looking north up Spadina toward Knox College (current Daniels Building at University of Toronto).

Panel members were also not impressed with the architectural expression of the building, drawing comparisons of the tower to it being “eaten away by something,” or being “the digital version of an Ayrshire cow.” They felt that the brick material in the reveals was “incongruous,” and that there was a certain “messiness” to the podium. Opinions on how to improve the architecture were split, with some suggesting a simplification of the design, while others suggested better integration of the cascading motif between the podium and tower, or perhaps slimming down the tower grid to appear less bulky. Rendering of the podium and Bloor frontage, image via submission to the City of Toronto

The Panel had a lot to say about the urban living room proposed at the subway entrance. While all Panel members liked the idea of a grand civic space and a celebration of the transit entrance, most of them agreed that the current design did not live up to that ambition, and instead looked like a “really nice commercial lobby”. They were quick to point out that a commercial lobby does not necessarily make everyone feel welcome or comfortable, and only constitutes a sanitized and privatized version of the public realm that is not an adequate substitute for true public space.

One Panelist’s comments nicely summarized the Panel’s attitude toward the urban living room:

There is a bit of a contradiction in my mind of demolishing the heritage building to create a large public space, but then encroaching on that public space by creating what is in fact a private space, that, despite being termed a living room, is not going to really achieve its true potential of being a real community space used by everyone, and a place where everyone can feel welcome. Conceptual rendering of the urban living room, image via submission to the City of Toronto

There were a wide range of suggestions on how to improve the urban living room, including installing large garage doors that open to the sidewalk in the summer; incorporating more greenery inside; exploring different public activities that could take place inside; playing with the dimensions of the space and the materials used; or even removing it altogether and having an outdoor public space, with access to the subway entrance directly from outside. But the Panel agreed that in its current form, they were not convinced of the urban living room as a public space, as “it can easily be conceived of as private and quite controlled”. Rendering of the urban living room along Spadina, image via submission to the City of Toronto

Regarding the public realm, the Panel also criticized the design team for their sidewalk landscaping design. The drawings presented showed either raised planters or patio space for the retail units along both Bloor and Spadina, but Panel members were quick to point out that the inclusion of these components essentially negated the benefits of pulling back the building facades to widen the sidewalks, basically leaving the sidewalks at a similar width as they were before. They stressed that widening the existing narrow sidewalks was critical and should take precedence over adding landscape elements that would take up precious public space. Conceptual renderings of the urban living room (left) and Spadina streetscape (right), image via submission to the City of Toronto

Heritage was also a topic of conversation during the presentation and discussion. Though none of the buildings on the property are listed or designated as heritage, the City has identified 334 Bloor Street – the 1914-built 3-storey structure on the corner of the intersection – as having heritage potential, and is currently studying its history to see if it merits designation. The design team has proposed demolishing the building, mainly because of the narrow sidewalks it creates at the busy intersection. In its presentation, the City mentioned the possibility of dismantling and rebuilding the heritage facades at a different location as an option to be explored, citing One Bedford Road as a precedent.

Panel members did not mind removing the building, despite saying that it might have some value, but also cautioned the design team that a proper justification was needed for doing so. They argued that the width of the sidewalk and the heritage value of the building were two separate and unrelated issues, and that if they were to demolish the building, it should be justified from a heritage perspective rather than simply by the need to increase the public realm.

They also cautioned that One Bedford Road was “an example of what not to do in this situation” and that by dismantling and relocating the facades, it would be akin to “turning them into commemorative plates of what was there” that would “not be doing any favours to the project”. Rendering of the podium and Spadina frontage, image via submission to the City of Toronto

The final vote from the Panel was unanimous non-support for the project. They concluded that there were many positive ambitions of the project, but that it needed “more clarity in the concepts, and a fulfillment of the concepts so that the story told is better matched by the design presented”.We will keep you updated as 334 Bloor West continues to work its way through the planning process, but in the meantime, you can learn more from our Database file for the project, linked below. If you’d like to, you can join in on the conversation in the associated Project Forum thread, or leave a comment in the space provided on this page.