Enlivening a Section Under the Gardiner with ‘Under Concord’

Concord Adex has unveiled plans for Under Concord, an initiative that would see a new multipurpose commercial and public space built underneath the Gardiner Expressway on the west side of Dan Leckie Way in amongst the condo towers of Concord CityPlace. The developer has submitted a Zoning By-law Amendment application to the City of Toronto to bring 5,509 m² of unique retail space across three levels, centred around a 580 m² square animated with walkways, interactive landscape elements, public seating, and varied surface treatments. 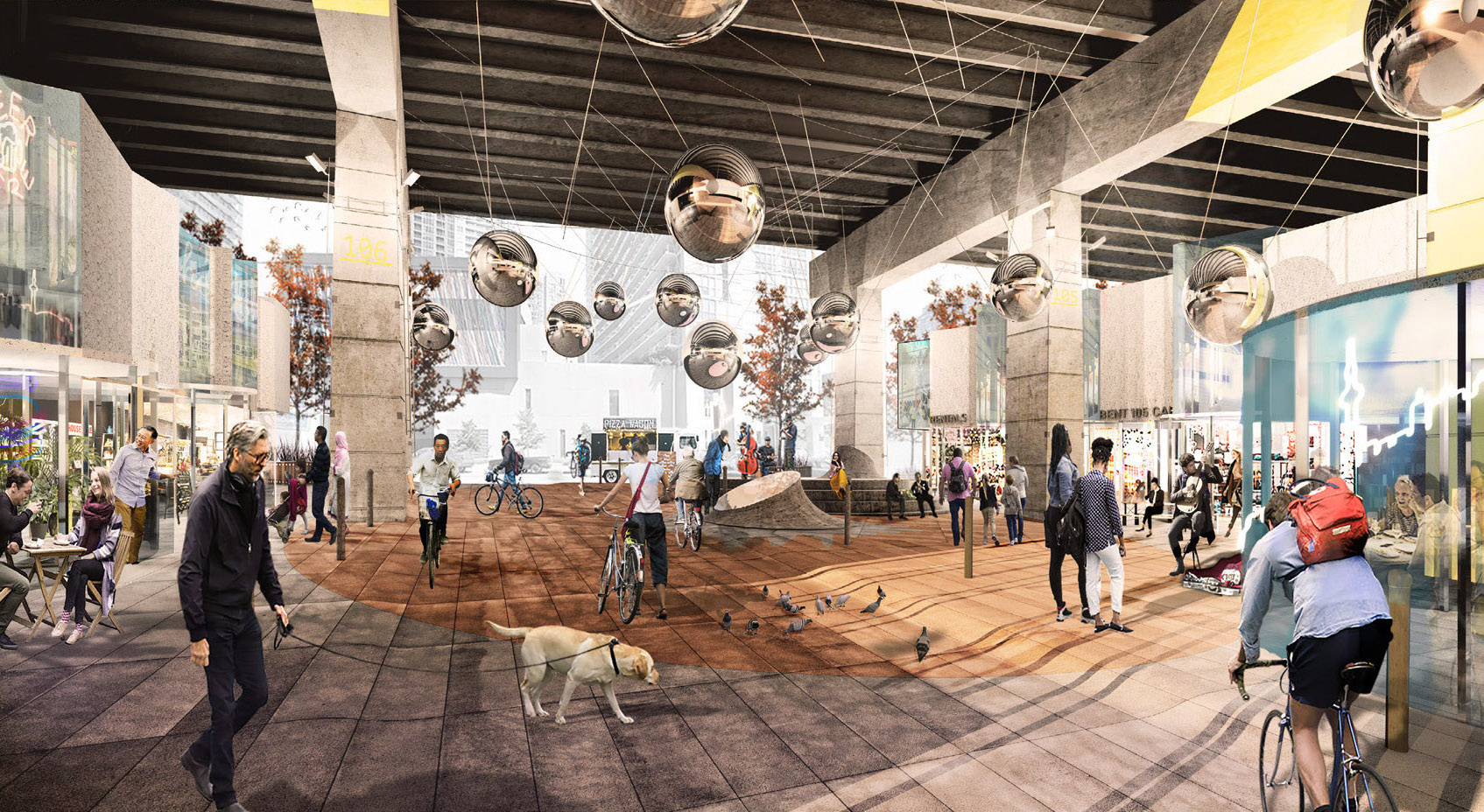 The subject site is an under-utilized 3,610m² space bounded by Housey Street to the north; Dan Leckie Way to the east; Panorama condominium tower to the south; and the servicing laneway of The LakeShore and LakeFront condominium towers and West Block 1928 to the west. 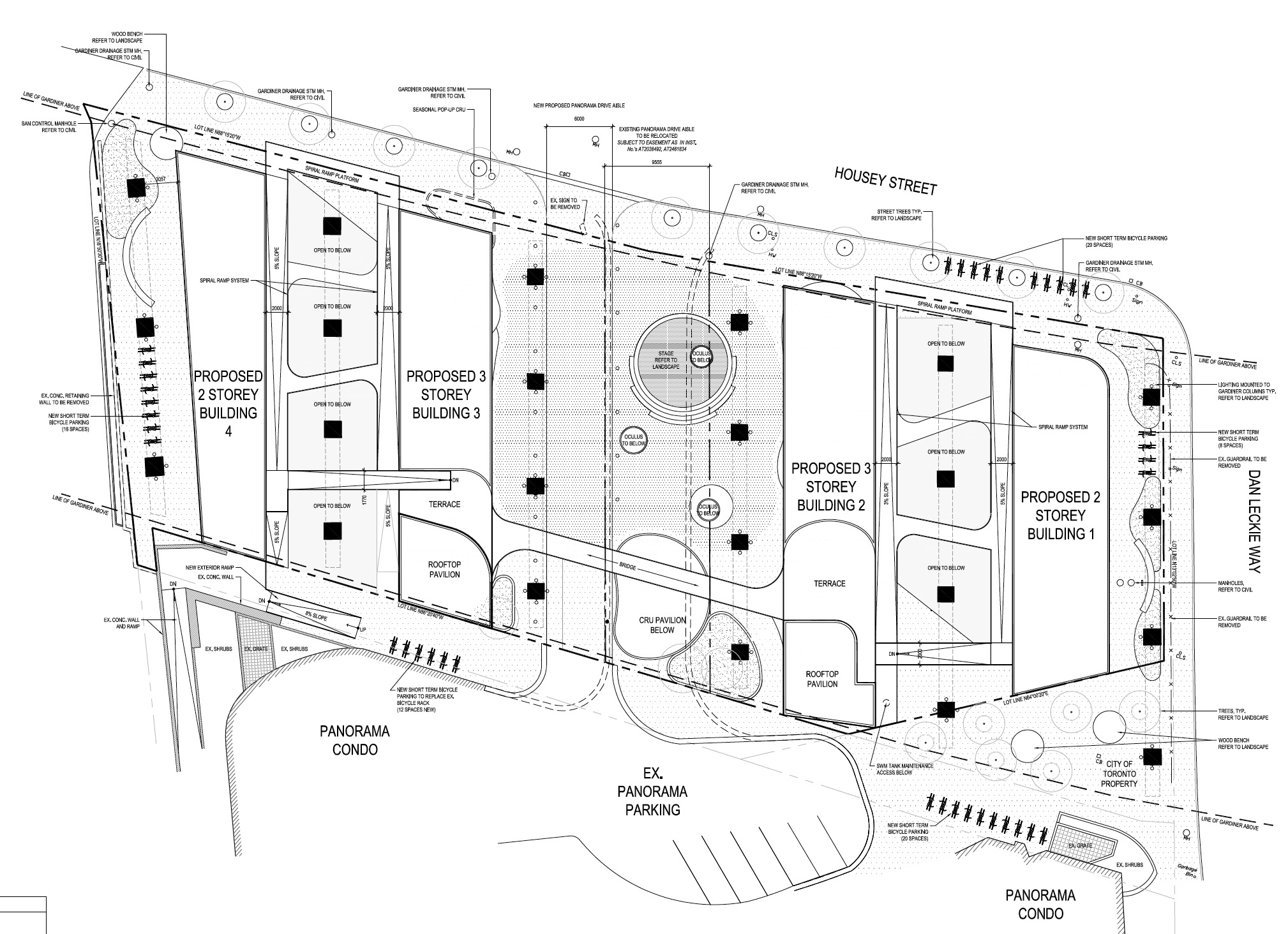 Currently serving as a mid-block pedestrian connection between CityPlace and Lake Shore Boulevard, and providing vehicular access to the Panorama condo, attempts have previously been made to bring the space life to, e.g., Pierre Poussin’s admired Mitosis Courtyard (2010) installation which features two dozen columns that double as light features, seating, and a painted pathway.

Despite it—Mitosis simply did not have a large enough budget nor scope to attract much attention—the space remains mostly inactivated. Two other similarly underused utilitarian areas below Toronto overpasses have in recent years been reimagined into successful park destinations, however, such as Underpass Park in the West Don Lands, and The Bentway, just a couple blocks to the west.

According to the Planning Rationale for Under Concord, “The strategic location of this site located between the waterfront and the CityPlace/Fort York neighbourhoods makes it ripe for re-imagining as an engaging gathering place – the next link in an emerging chain of transformative spaces and places which include The Bentway and the West Block 1928 retail.” 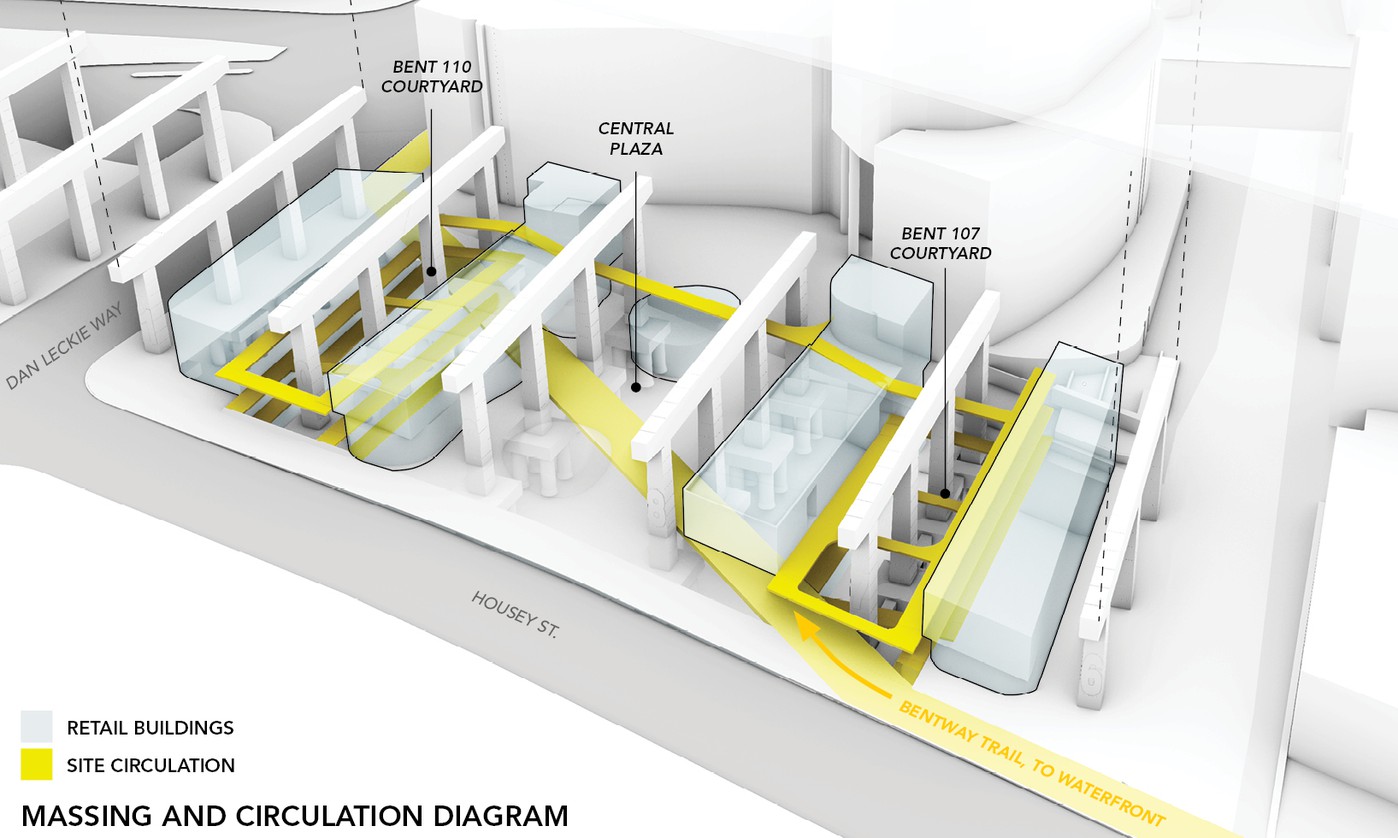 Arrangement of the Under Concord components, image by LGA Architectural Partners for Concord Adex

The buildings’ placement and the ground level layout maximize porosity at grade while respecting the servicing needs for the expressway above. Their form was generated from 3-metre offsets from the existing Gardiner columns and undercarriage to satisfy maintenance and rehabilitation requirements, while also respecting the iconic frame of the Gardiner.

The architecture seeks to seamlessly transition the design elements of the Gardiner into the buildings, which would be constructed from lightweight concrete paired with glass panels. In contrast to the heavy forms of the surrounding infrastructure, the additions are bar-shaped buildings that end in circular forms.

At the heart of the proposed development is a central plaza that would host an array of public programming such as play areas, rest spaces, events, and pop-up opportunities such as farmers’ markets.

Micro-commercial units are accessed externally via a helix-ramping system that circles the Gardiner columns. These exterior, elevated walkways are linked at key locations by bridges, creating a vertical streetscape, extending the public realm above the central plaza. 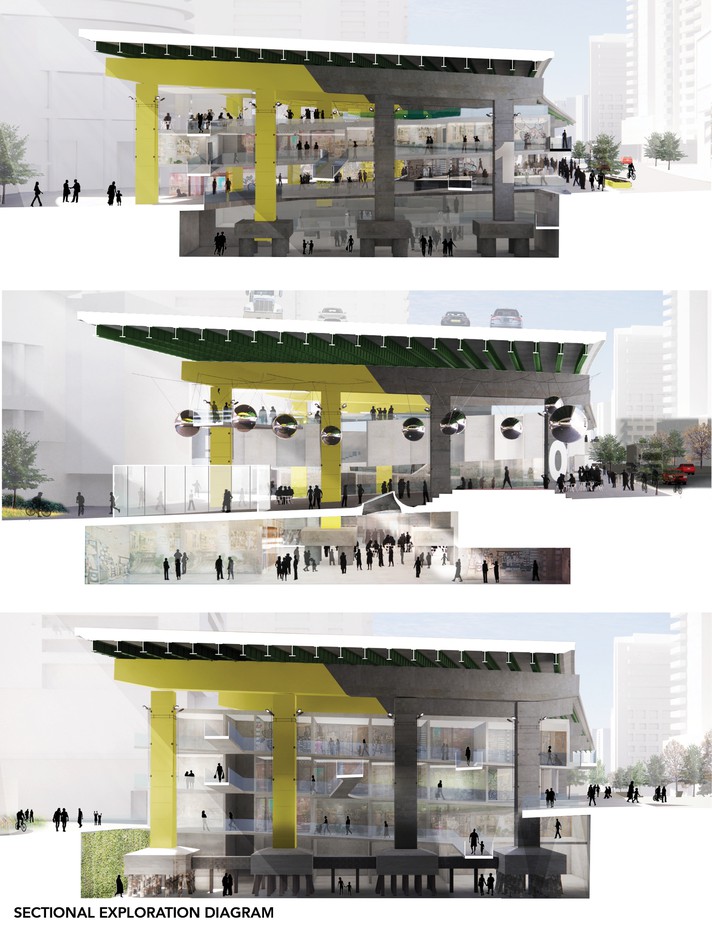 Sunken courtyards surround the columns, providing access to the development’s lower levels. Ramps lead down to a large, connected underground food hall, exhibition area, with space for other interactive uses, including a gathering area for the community, with some natural light penetrating through ‘oculi’ at grade.

Looking west through the Food Hall of Under Concord, image by LGA Architectural Partners for Concord Adex

Despite being perpetually shaded by the expressway structure and surrounding high-rise condominium towers, some areas at the periphery of the site will receive a few hours of sunlight, which has informed the landscape plan and will also inform future programming of the space. Suspended planters, native grasses, and strategically located street trees are proposed to soften the utilitarian forms. 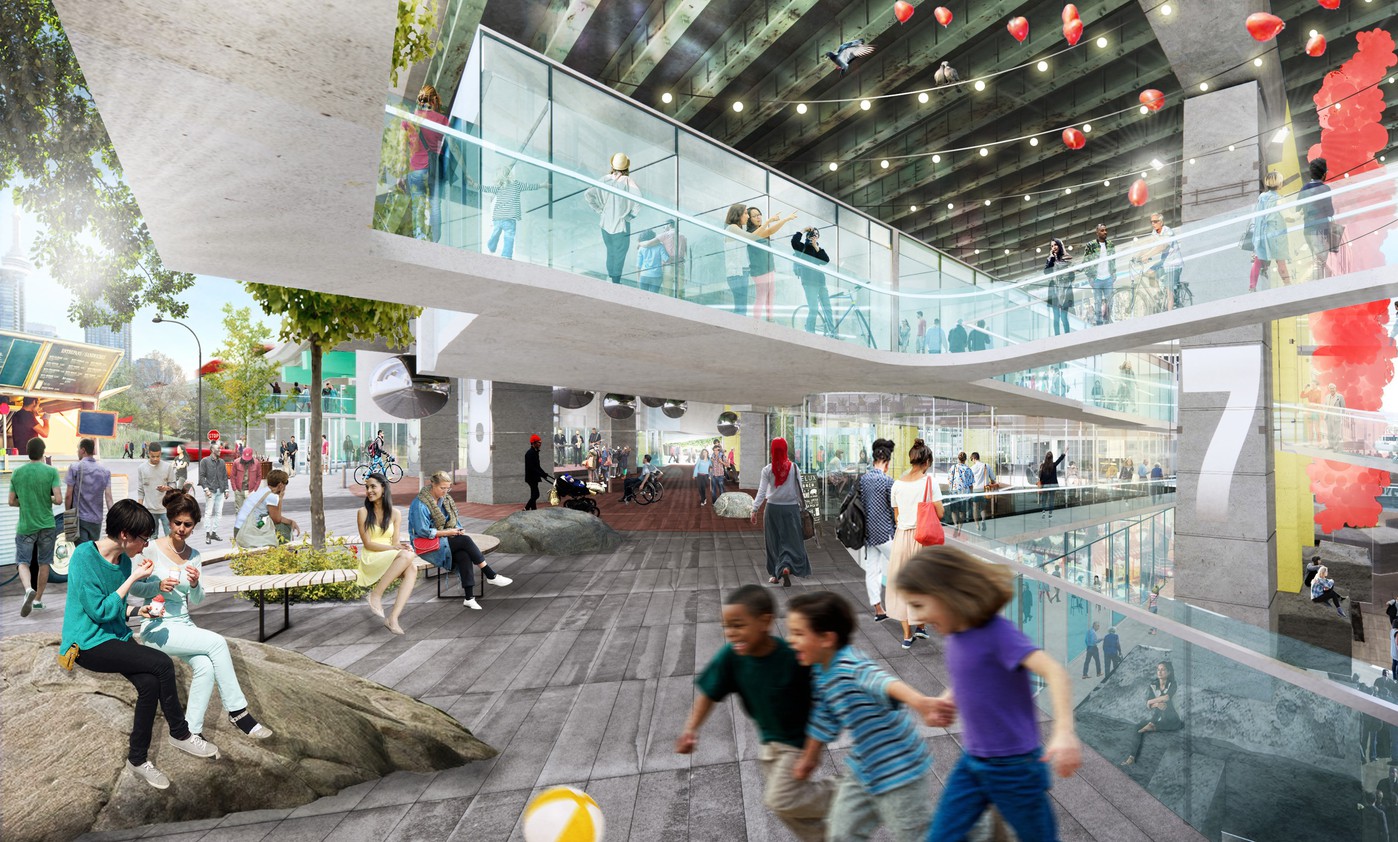 Looking east along the north edge of Under Concord, image by LGA Architectural Partners for Concord Adex