It’s not on any postcards, nor highlighted in any promotional material, but to many locals, the oddity that is the Cube House at 1 Sumach Street is easily identified as a Toronto landmark. Since 1996, the trio of tilted cubes has been poking above the guardrails of the Eastern Avenue Bypass, confounding drivers exiting the DVP with its irregular forms. The building was designed and built by Canadian architect Ben Kutner as a home for him and his partner, modeled after Piet Blom’s Kubuswoningen complex in Rotterdam as a model for low-cost affordable housing. The idea never caught on in Canada, and so Toronto’s Cube House remains the only one in the country. 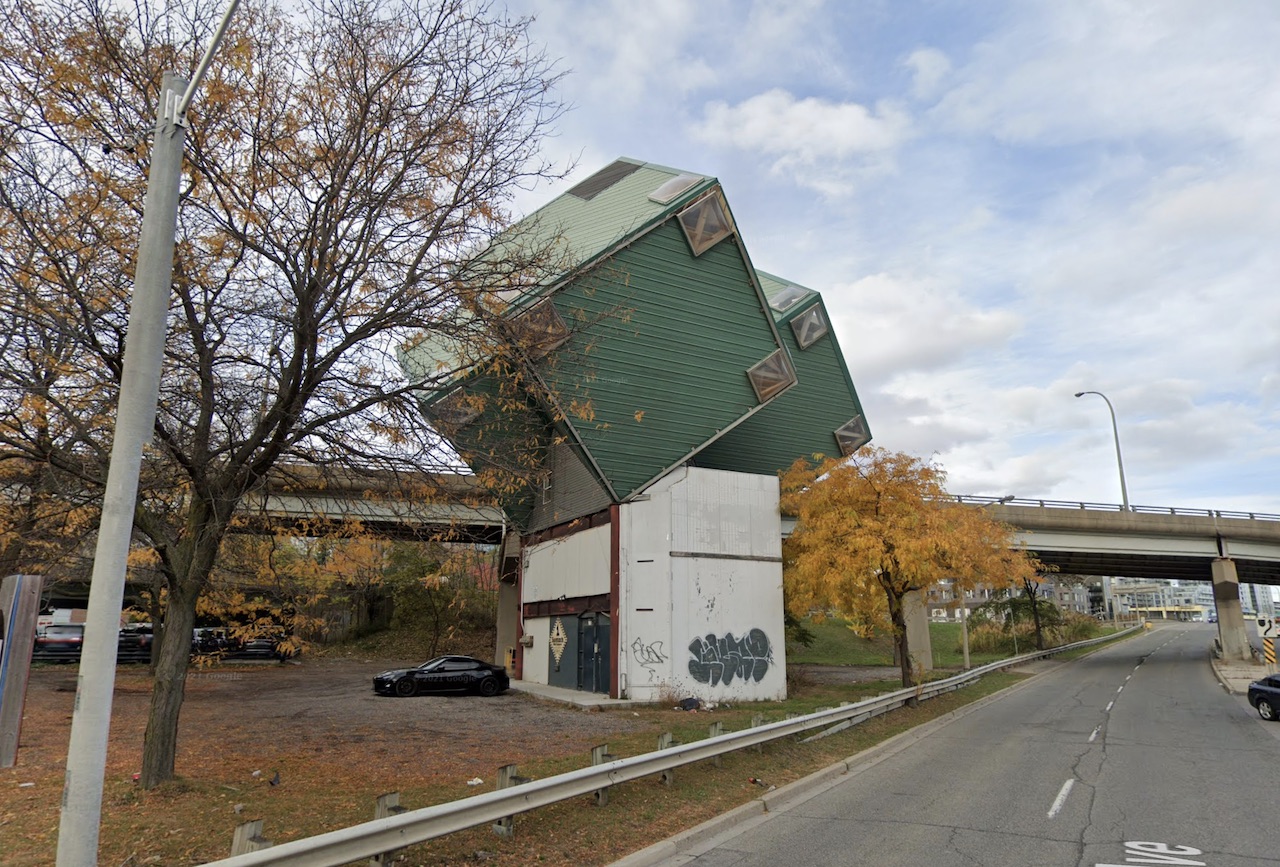 After 25 years making its mark in Corktown, the Cube House could soon face demolition, as Markee Developments has submitted a rezoning application for a 35-storey residential tower at 1 Sumach Street. Dubbed ‘Sumach Artsplace,’ and designed by gh3, the tower takes a cue from the iconic structure and features an angular, corrugated form that responds to the irregularly-shaped site. 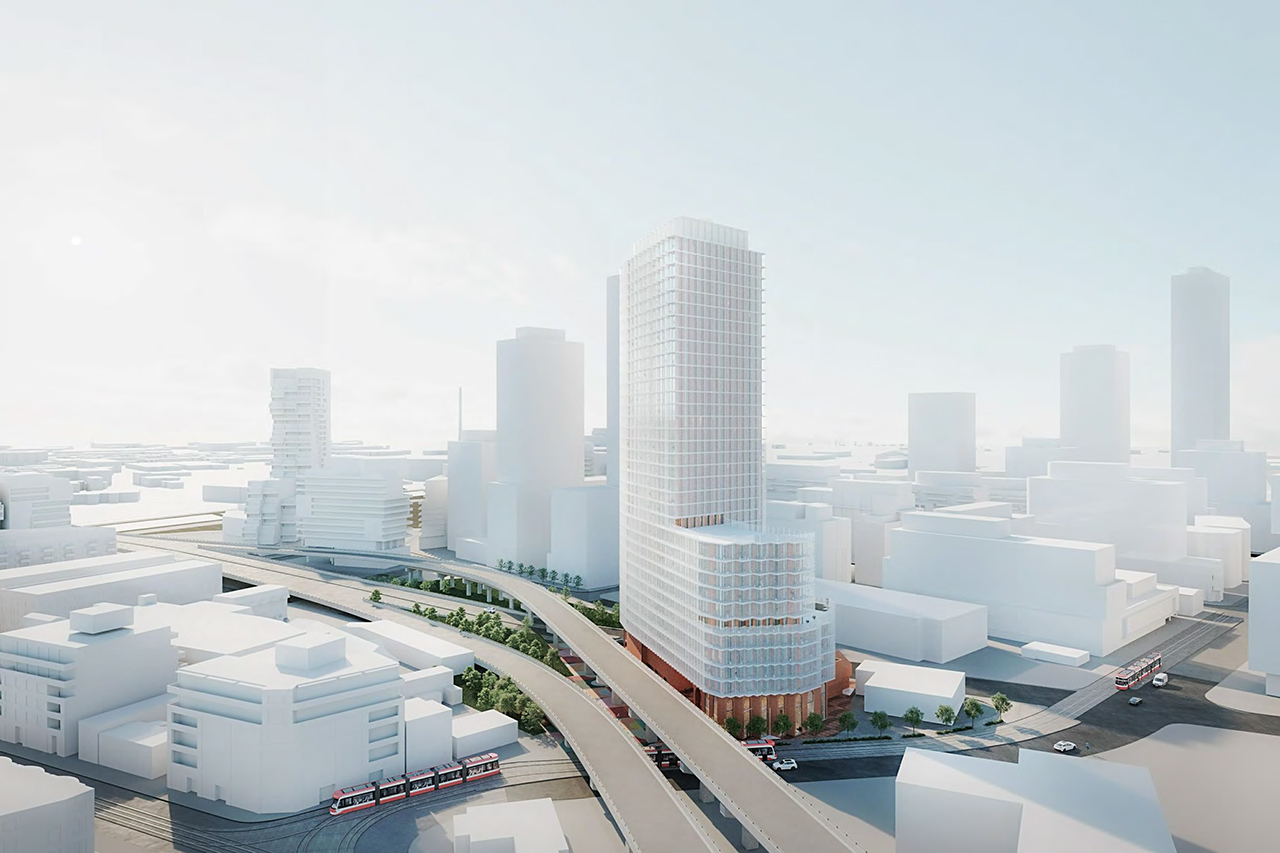 Rendering looking east, image via submission to the City of Toronto.

The site’s redevelopment does have not to spell the end for the Cube House, however. Partner of Markee and former Chief City Planner, Jennifer Keesmaat, stated that they are willing to work with a partner to relocate the Cube House, fulfilling the architect’s original intention—that is, if someone wants it. If no one comes forward to purchase the house, then it will indeed face the wrecking ball. 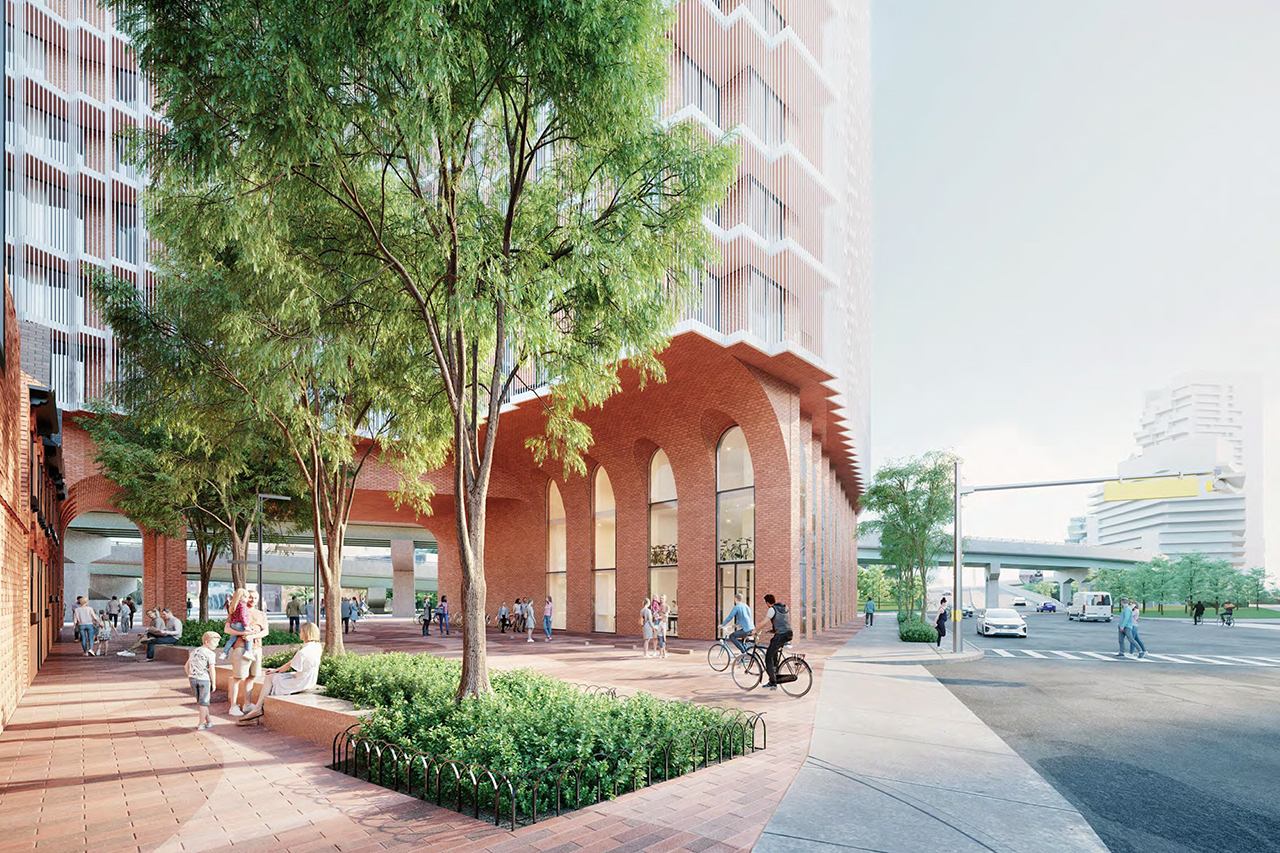 Rendering looking east along Eastern Avenue, image via submission to the City of Toronto.

The site extends beyond the Cube House property to include several lesser-known but equally interesting heritage properties across the street. The development spans the dead-end Old Sumach Street, a remnant of the original trajectory of Sumach Street before the construction of the Eastern Avenue Bypass severed the neighbourhood in two in 1962-64. A row of residential houses, left behind after the highway construction, stands on the west side of the street, including two single-storey buildings constructed in 1904; four Victorian rowhouses dating from 1886-89; and two additional rowhouses built in the 1980s. The four 1880s rowhouses will be partially retained, relocated, and incorporated into the base of the new development.

Existing buildings on the west side of Old Sumach Street, image via Google Maps. 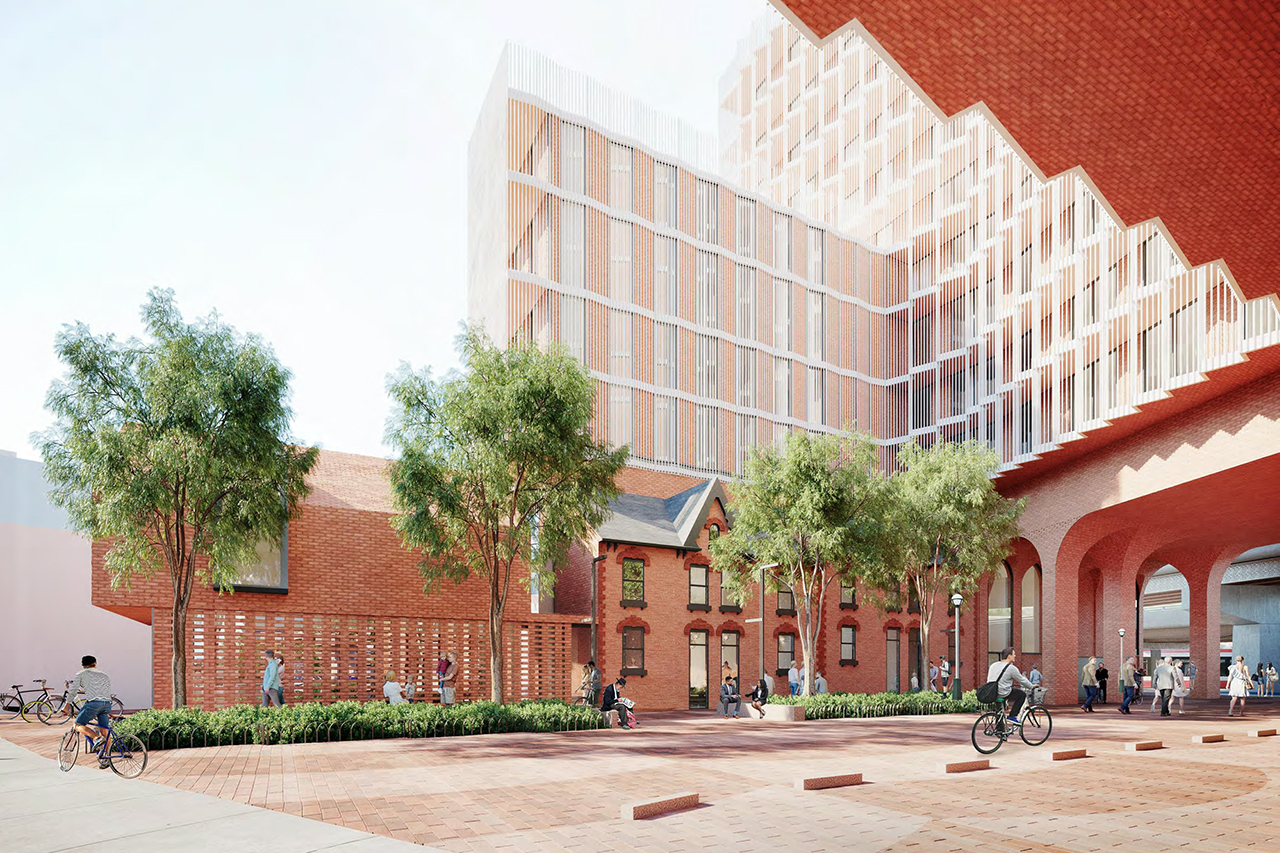 Rendering of west side of Old Sumach showing retained heritage facades, image via submission to the City of Toronto.

The new tower is proposed to house 119 purpose-built affordable rental units, to be secured as such in perpetuity, along with 374 market condominium units. A total of 280m² of retail space is included on the ground level at the southwest corner of the property. The rental units will be located on Levels 3 through 8, while the condo units occupy the remainder of the upper levels. 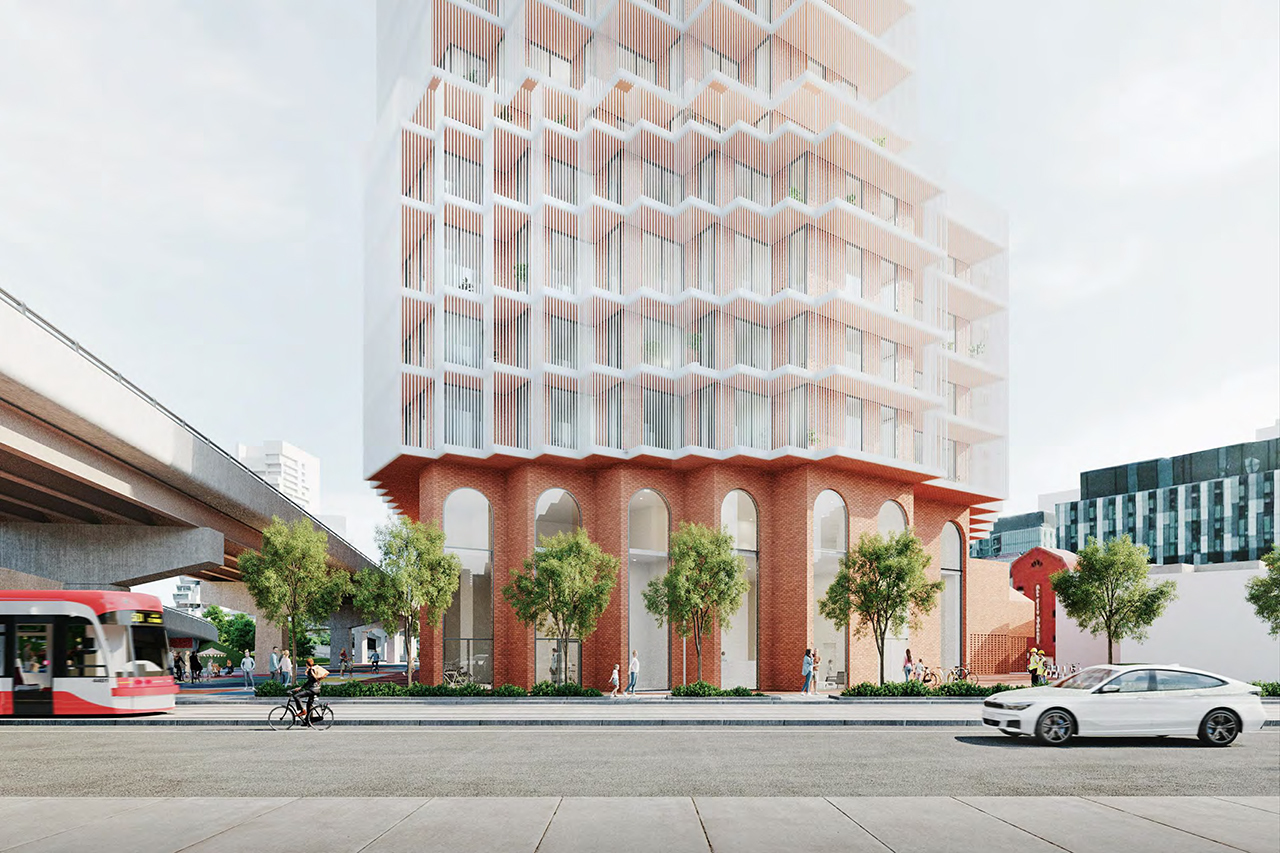 Rendering of the west elevation along Sumach Street, image via submission to the City of Toronto. 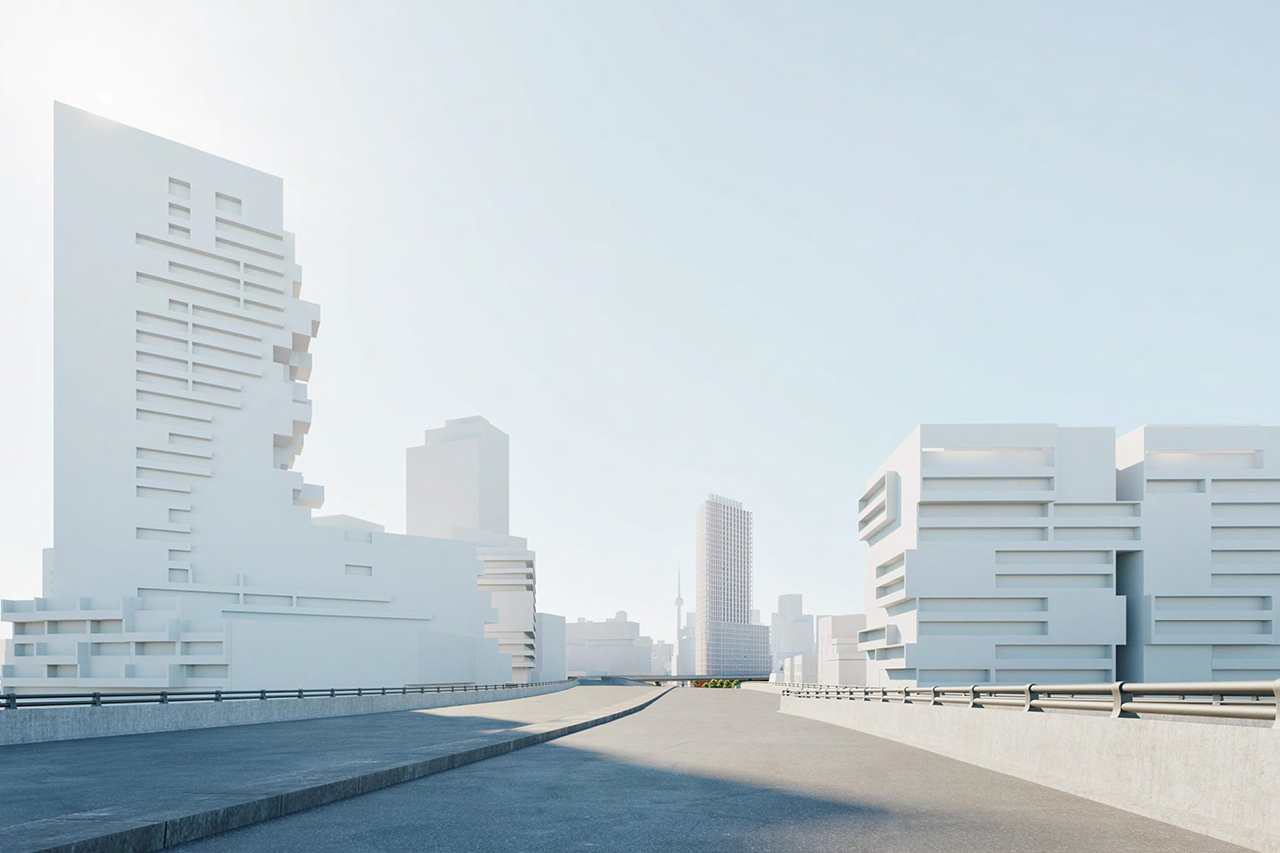 View looking west along the Eastern Avenue Bypass, image via submission to the City of Toronto.

The massing of the new building contains several distinct volumes. The 35-storey tower is located on the east side of the site and features a triangular floor plate, creating a very prominent flatiron building. A 12-storey volume protrudes westward, spanning across Old Sumach Street, which then steps down to 6 storeys on the west side of the property. Finally, the building steps down once again to a double-height one-storey structure at the southwest corner of the site fronting onto Eastern, which will contain the retail space. 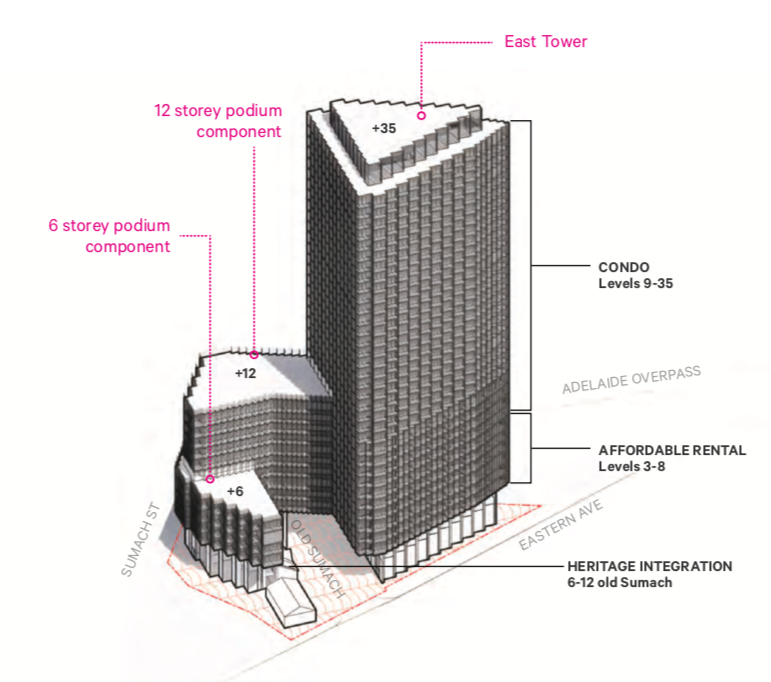 Massing diagram, image via submission to the City of Toronto.

The development also proposes some intriguing public realm improvements. The dead-end Old Sumach Street would be retained partially to facilitate a potential connection to an extension of Underpass Park, which the development team is highlighting as a way to weave together the divided neighbourhood and connect adjacent public parks to each other, reminiscent of the Bentway on the west side of downtown. While this is currently not in the City’s plans, Markee is highlighting this as a great opportunity to enhance the public realm, and is taking it into consideration in the planning of their development. 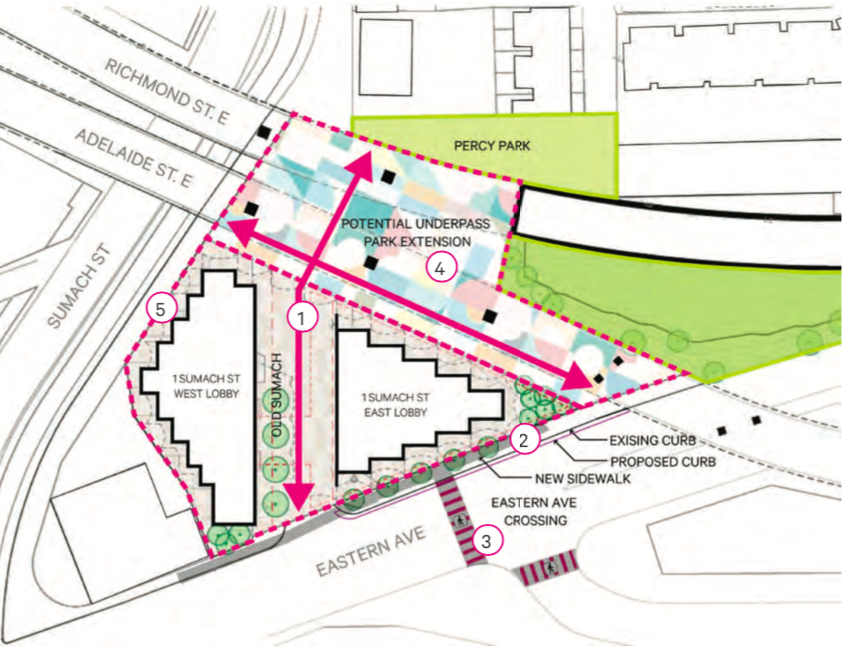 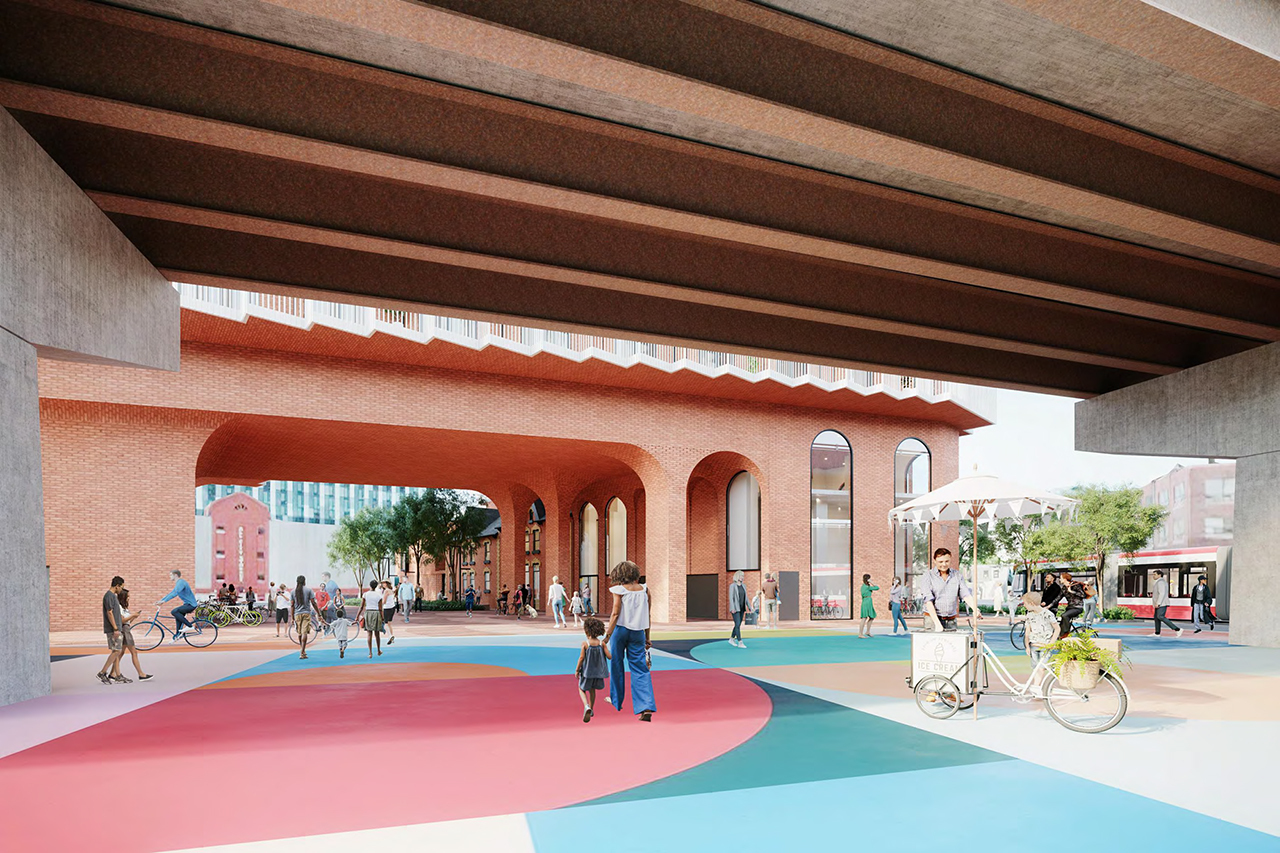 Conceptual rendering of an Underpass Park extension, image via submission to the City of Toronto.

Also notable is the proposal’s use of automated stacked parking, providing 32 spaces in two separate stackers, which greatly minimizes the impact on below-grade conditions. A total of 484 bicycle parking spaces are also provided. 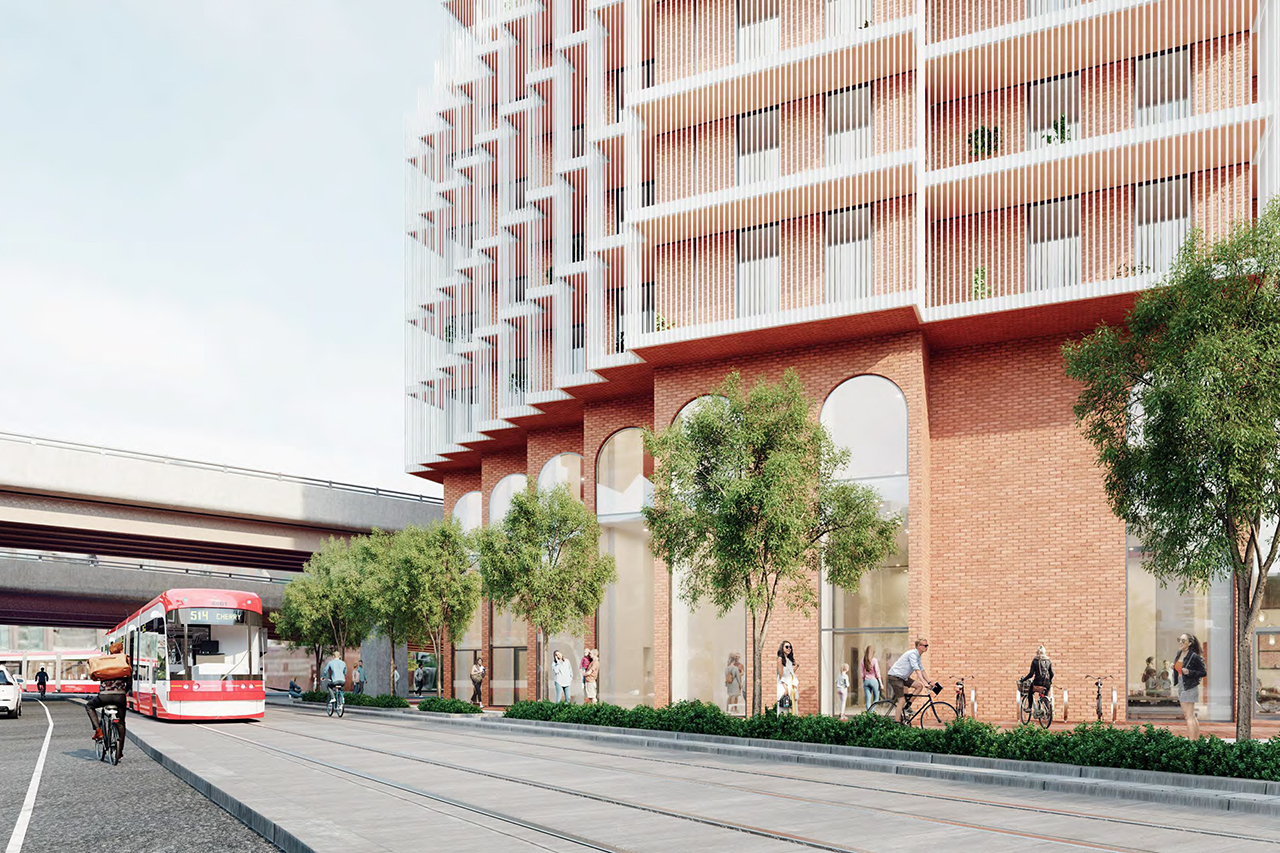 Rendering looking north along Sumach Street, image via submission to the City of Toronto.

We will keep you updated as Sumach Artsplace continues to work its way through the planning process. In the meantime, you can learn more from our Database file for the project, linked below. If you’d like, you can join in on the conversation in the associated Project Forum thread, or leave a comment in the space provided on this page.