Freed Developments and Fengate Properties have hired renowned Chicago-based AS + GG Architecture for a redesign of a 2.2 hectare/5.4 acre master-planned community on Wynford Drive just to the northeast of where Eglinton Avenue and the Don Valley Parkway meet in Toronto’s Don Mills area. The site at 175 Wynford Drive, currently home to the 6-storey Toronto Don Valley Hotel and Suites, was purchased by Freed and Fengate in 2020 from Allied Hotel Properties. To the immediate southeast of the site is the low-slung Delmanor retirement residence, while to the immediate west is the Tridel-built Accolade condominium tower. 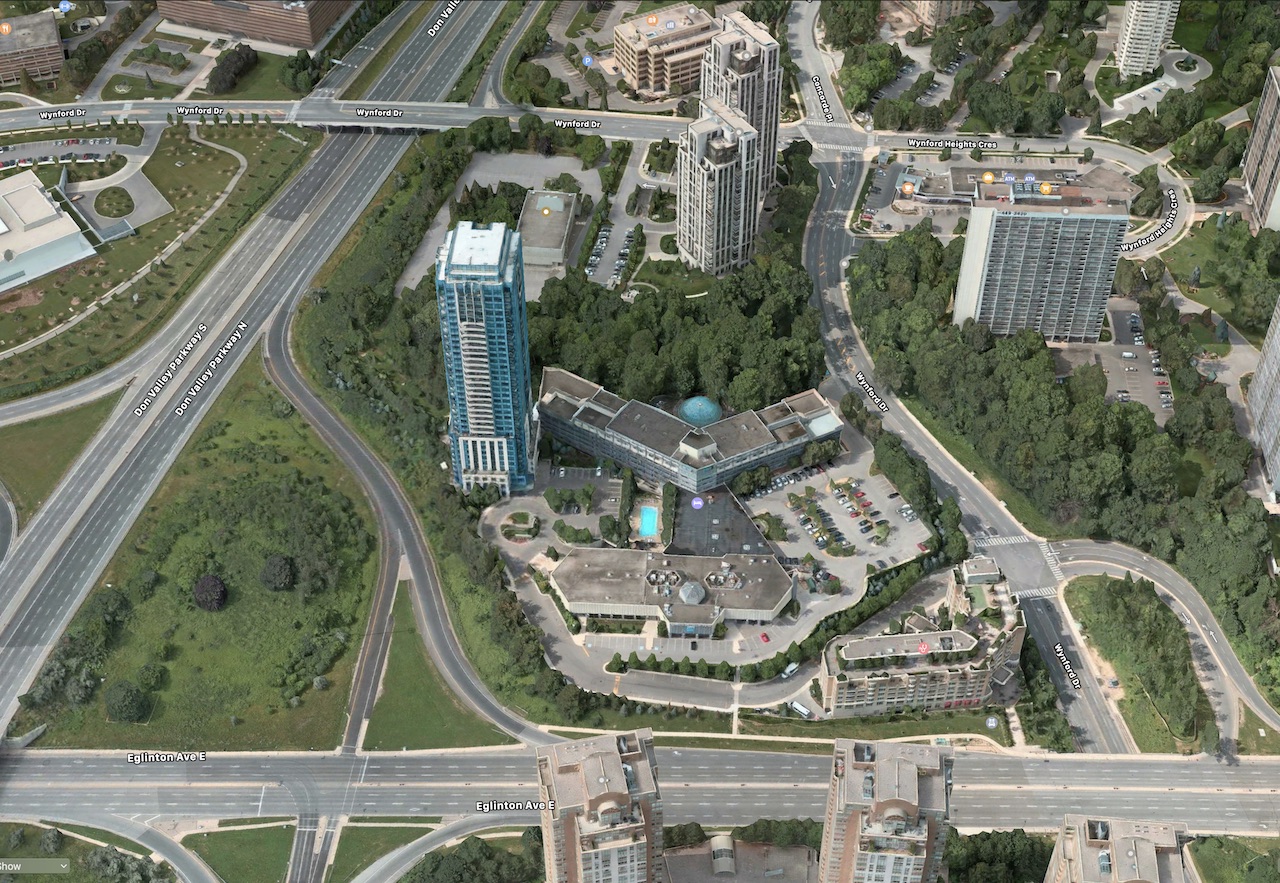 Allied Hotel Properties had previously proposed to intensify the site with two residential towers of 32 and 39 storeys and containing 755 new residential suites, while keeping the existing 353-room hotel building. After the purchase, Freed and Fengate initially proposed in September, 2020 to replace the existing building with 4 towers of 45, 47, 49, and 54 storeys. Designed by BDP Quadrangle, a 125-room hotel would have operated in the base of one of the towers, while 2,750 new condo suites would have taken up the bulk of the towers. 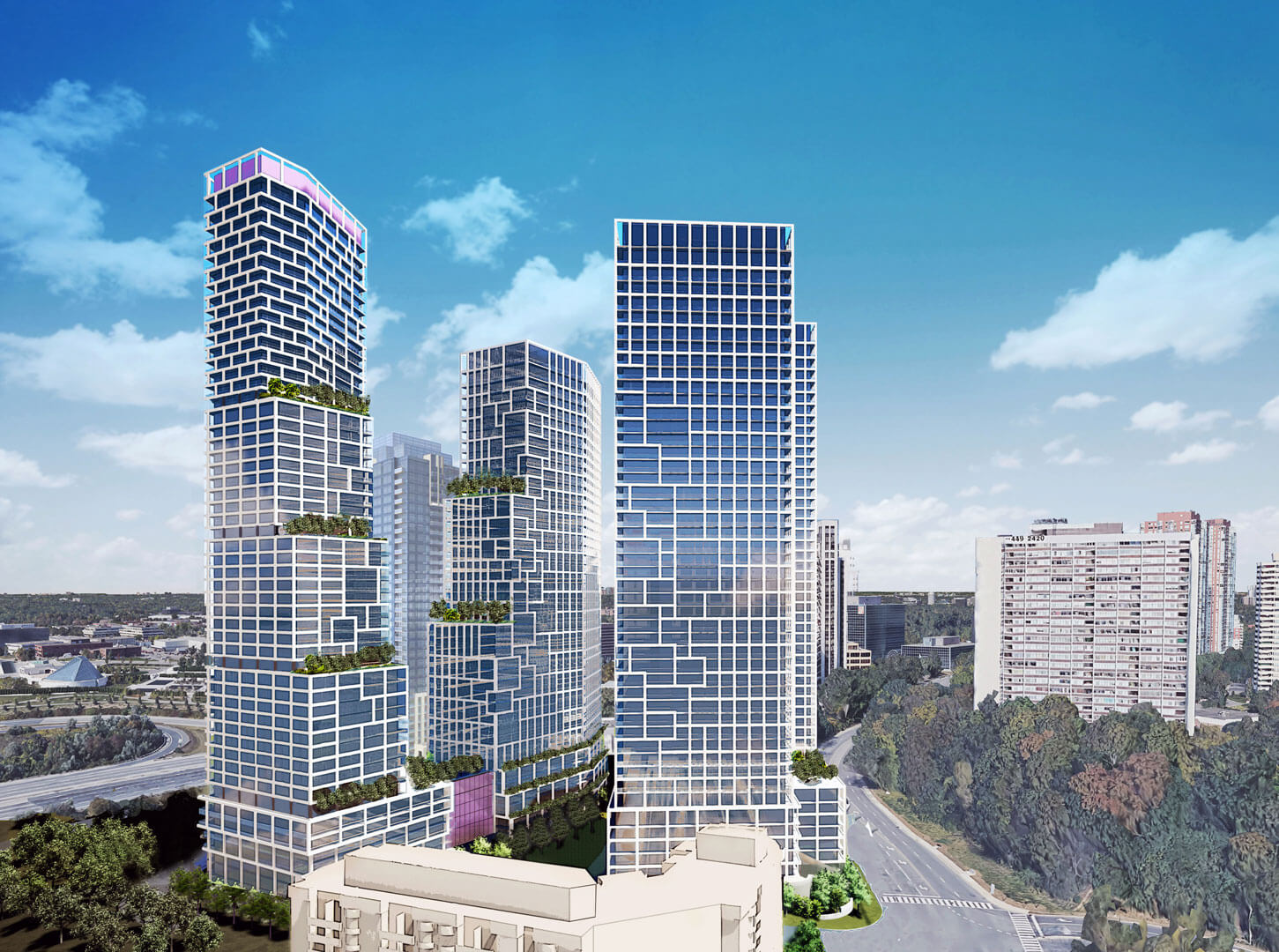 Now, Freed and Fengate have resubmitted a completely redesigned plan for the site designed by AS + GG Architecture with Claude Cormier + Associés on the landscape plan. The developers note that the resubmission responds to feedback to their previous plan from “City Staff, the public, and our immediate neighbours.” Among the major moves the “exciting new architectural vision for the property” comes with one less albeit taller towers and a “significant increase in space available to the public realm.” 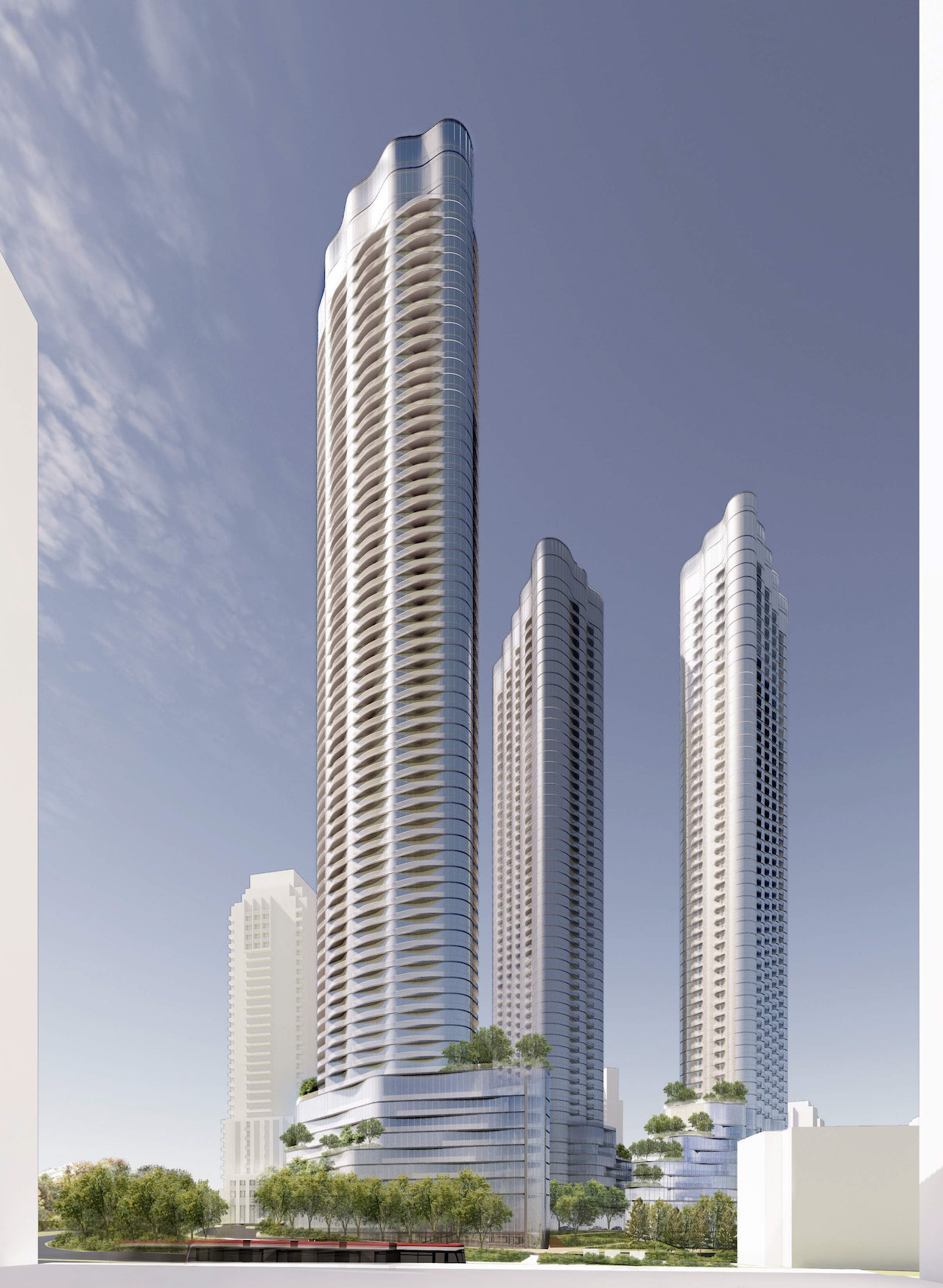 Freed recently submitted another AS + GG Architecture-designed proposal to the City for a redevelopment of a site in the Entertainment District at 240 Adelaide Street West that would add a 68-storey condo to the area, while the first AS + GG design in Toronto is that of 160 Front Street West, a 46-storey office tower from Cadillac Fairview, currently rising above grade, that will have the TD Bank as its lead tenant. Adrian Smith of AS + GG is the designer of both the world’s current tallest building, the Burj Khalifa in Dubai, and the tallest planned building, the Jeddah Tower, currently on hold approximately one-third of the way to its top, in Saudi Arabia. 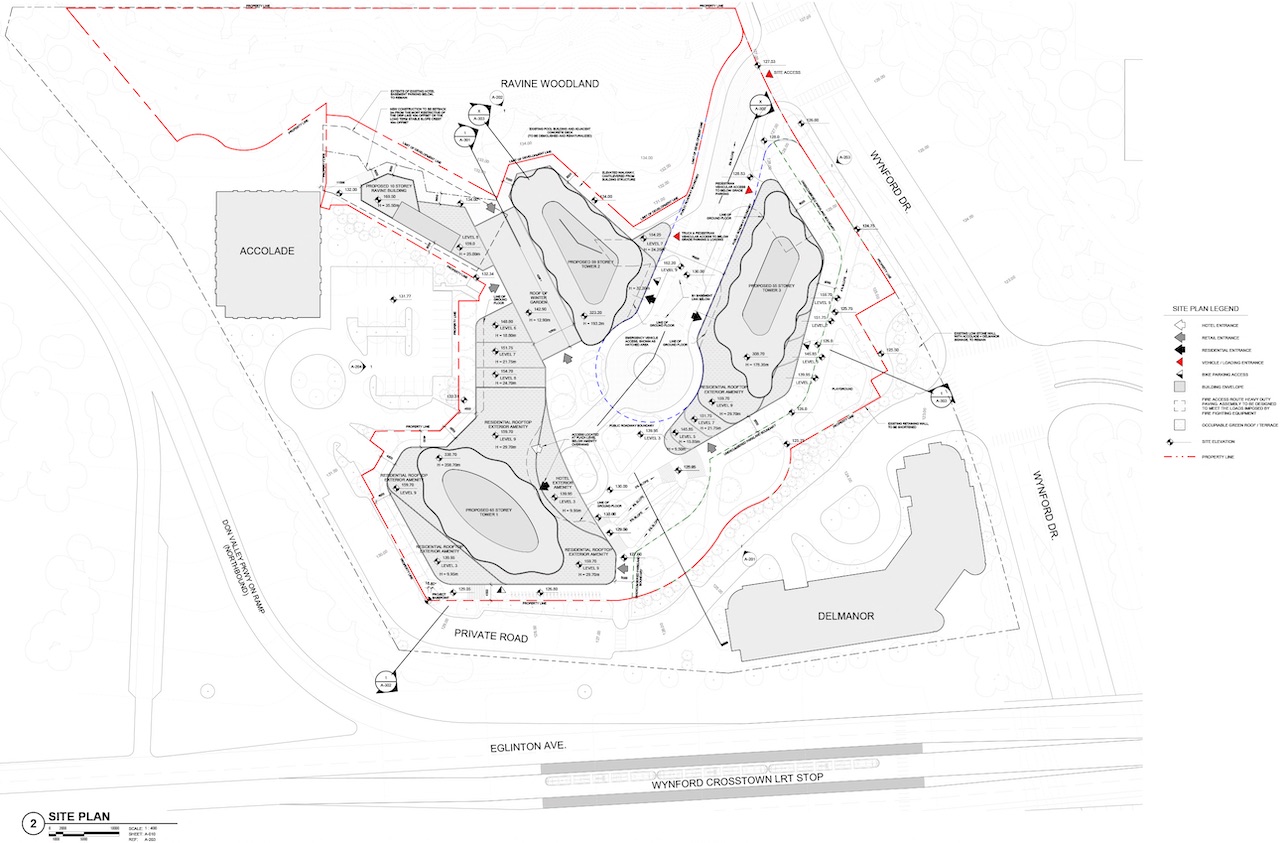 At the 175 Wynford site, the new plan would produce towers of 55, 59, and 65 storeys, all at greater separation distances than in the previous four-tower plan, and arranged around a new public road that would connect the buildings to Wynford Drive. Along the south edge of the site, a new public park would make the development more porous for pedestrians, with paths to both Wynford Drive and to a proposed set of lights at Eglinton Avenue where pedestrians would be able to cross the street to access the Wynford stop of the coming Crosstown LRT. 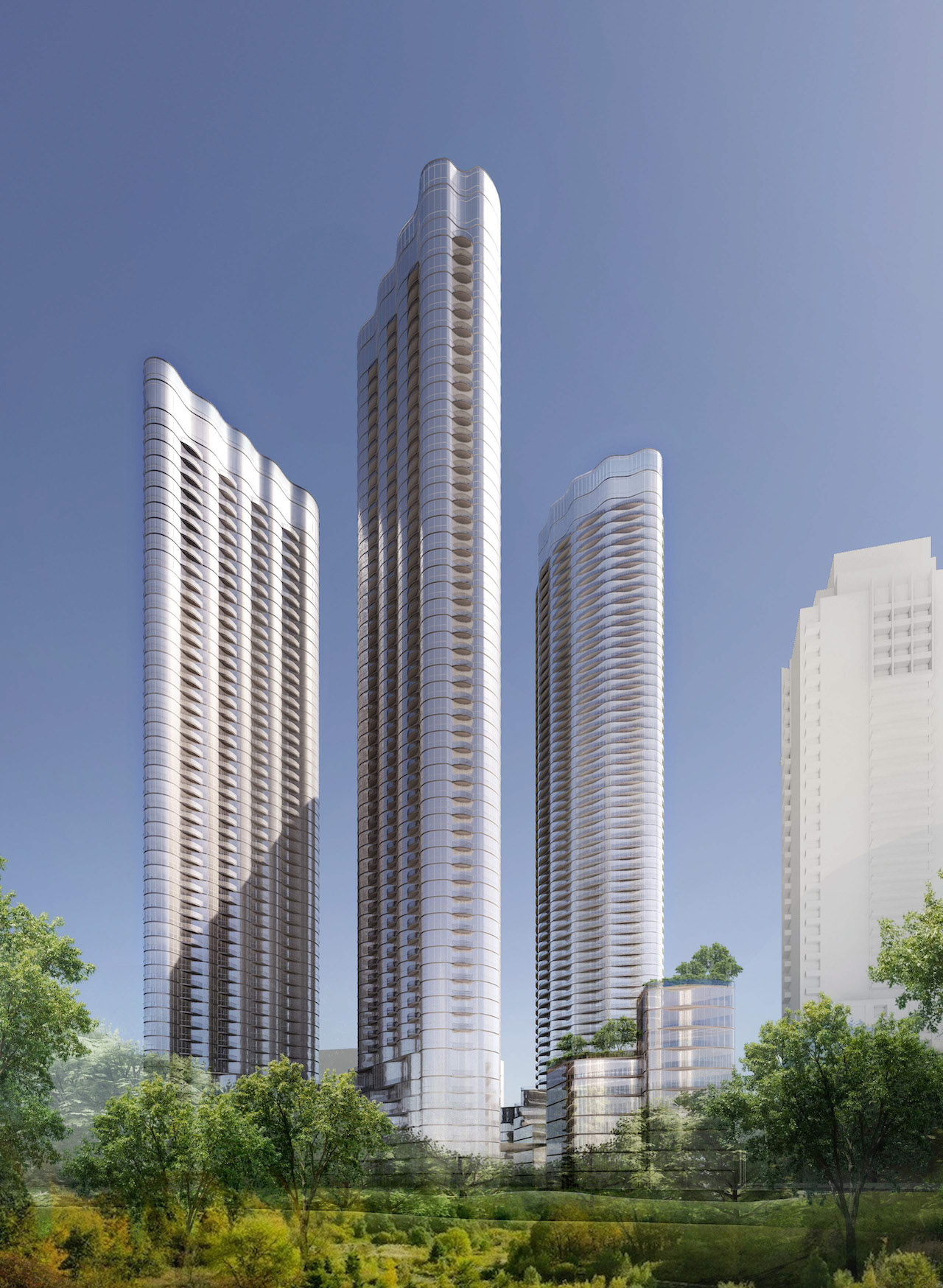 The buildings are characterized by flowing, rounded designs with multiple scallops, alternating ones of which provide balcony spaces for the suites. While a Site Plan Approval application has not yet been submitted for the proposal, so no detailed cladding specifications have been submitted and renderings should only be considered as conceptual at this point, the stylized images do suggest that the cladding may be rounded glass curtain wall or hybrid window wall with minimal mullions. 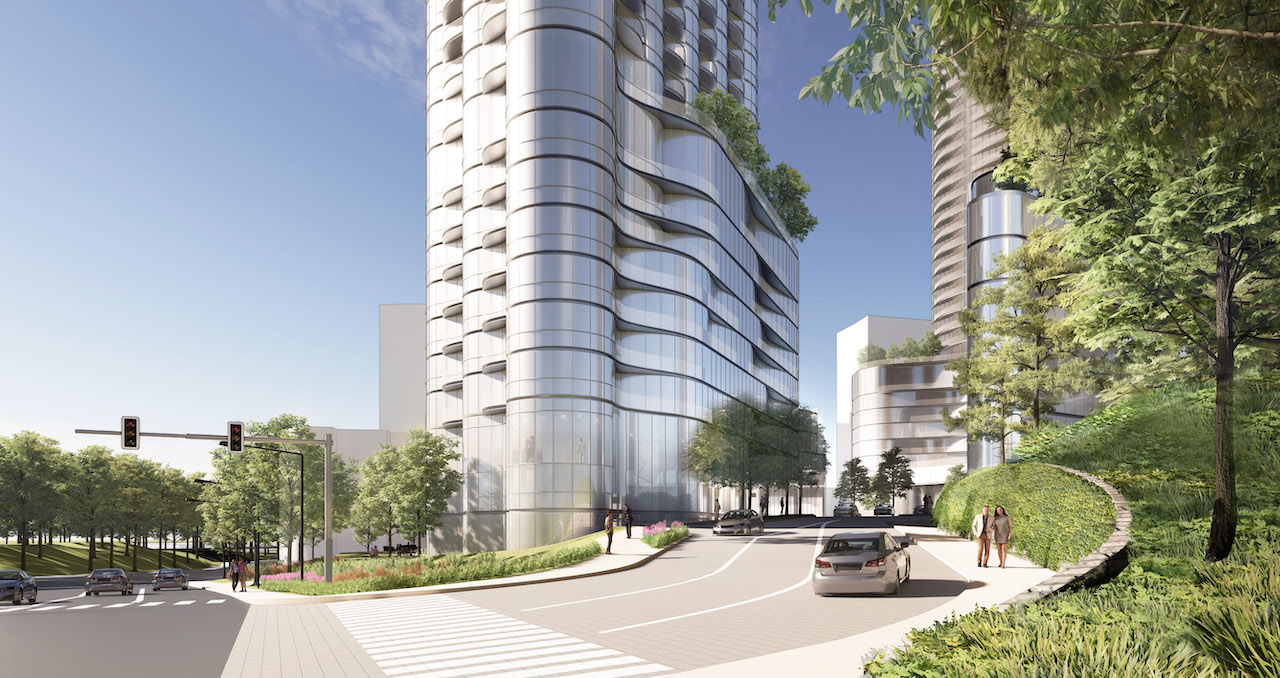 In the plan, each of the three towers has amenities at ground level, on podium floors, at the tops of the podiums with adjacent rooftop terraces, and on the very top floors of the towers as well, with the mechanical penthouse one level below. A total of 2,500 condominium suites are proposed across the three towers in a mix of 126 studios (5%), 1,699 one-bedrooms (68%), 425 two-bedrooms (17%), and 250 three-bedrooms (10%). The 208.7 metre-tall, 65-storey Tower One would also have a 125-room hotel on the first seven floors. 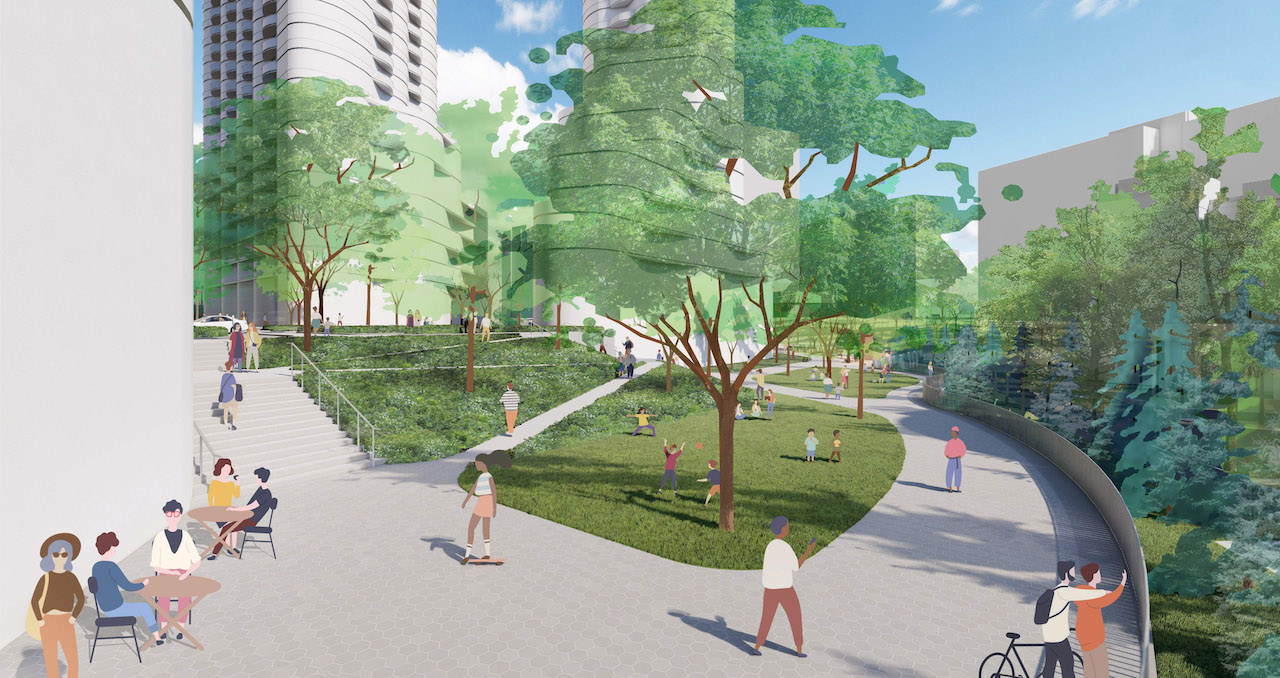 You can learn more from our Database file for the project where there are more renderings and more statistics, linked below. If you’d like to, you can join in on the conversation in the associated Project Forum thread, or leave a comment in the space provided on this page.