To read the news coverage in Toronto today, you would think that the Union Station Revitalization Project, started in 2009, is now complete. That’s false, it is not. The claim that the project is complete is made in a press release from Mayor John Tory’s office, so maybe there are reasons for the unquestioning press coverage, but plenty of work, however, is yet to be completed from the original scope of the project. At the same time another project at the station, The Union Station Enhancement Project, this time carried out by Infrastructure Ontario and Metrolinx, aiming to rework many of the GO platforms to increase capacity, is really just getting underway. Union Station will, therefore, continue to be a construction site for years to come. Nevertheless, what did happen today is reasonably momentous: the new GO Bay Concourse has opened, and plenty of dignitaries were on hand for the ribbon cutting along with Mayor Tory, including James Maloney, Member of Parliament for Etobicoke-Lakeshore, Government of Canada; The Honourable Stan Cho, Associate Ontario Minister of Transportation (Transit-Oriented Communities); and Phil Verster, President & Chief Executive Officer of Metrolinx. 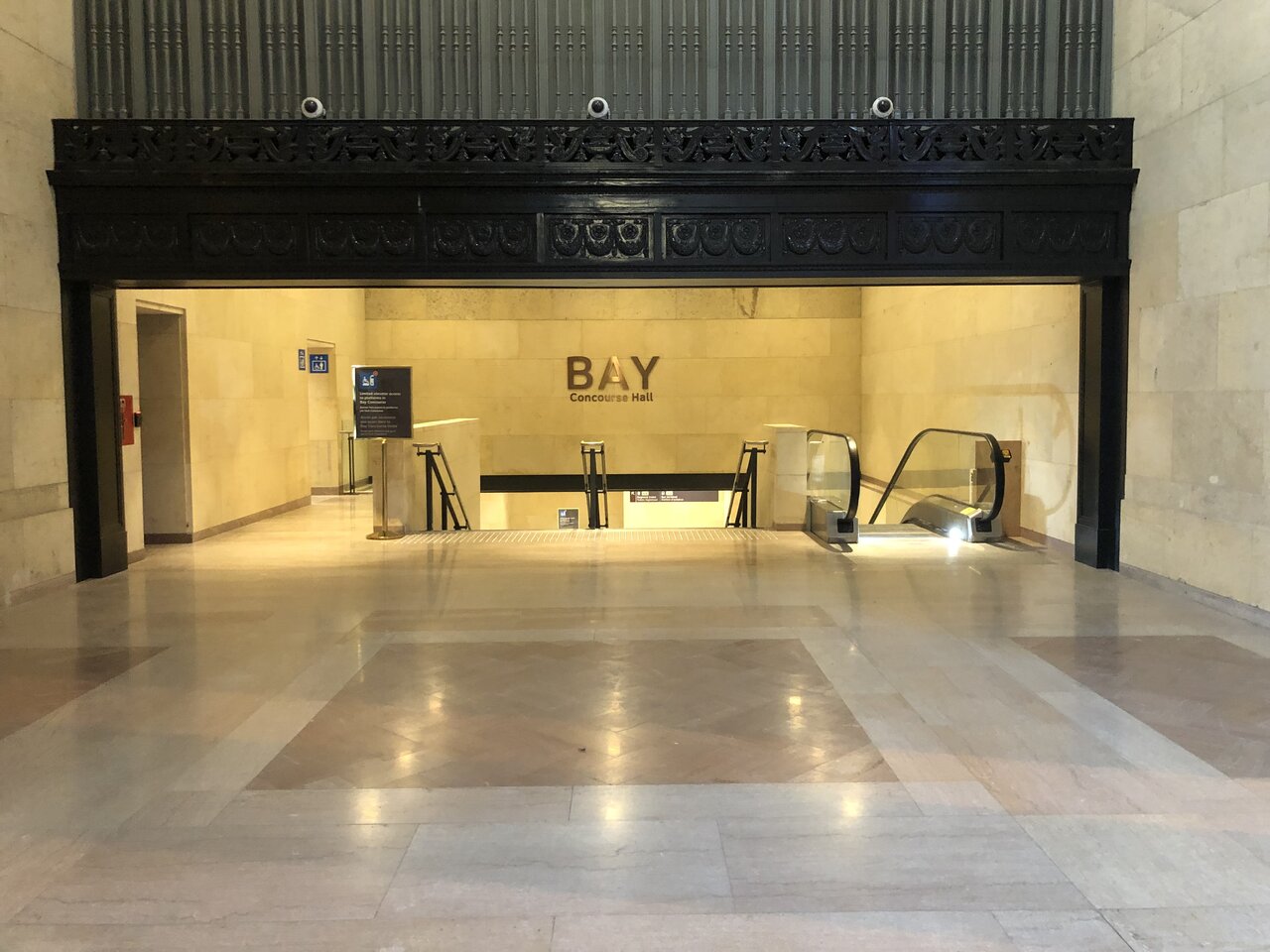 Mayor Tory’s remarks included thanks to the public for their patience while the highly complicated work has gone on. Originally targeted for completion in 2015 in time for the PanAm Games and with a $640M budget, the project dragged on as surprises were found when the nearly century-old building was gutted in areas, its foundations dug out for a deeper basement level, all the while maintaining service to GO commuter trains and VIA and Amtrak intercity trains above. (More people pass through Union Station than any other transportation hub in Canada; about 300,000 a day prior to the pandemic.) Other slowdowns came when the initial general contractor needed to be replaced, and the pandemic itself slowed work down. 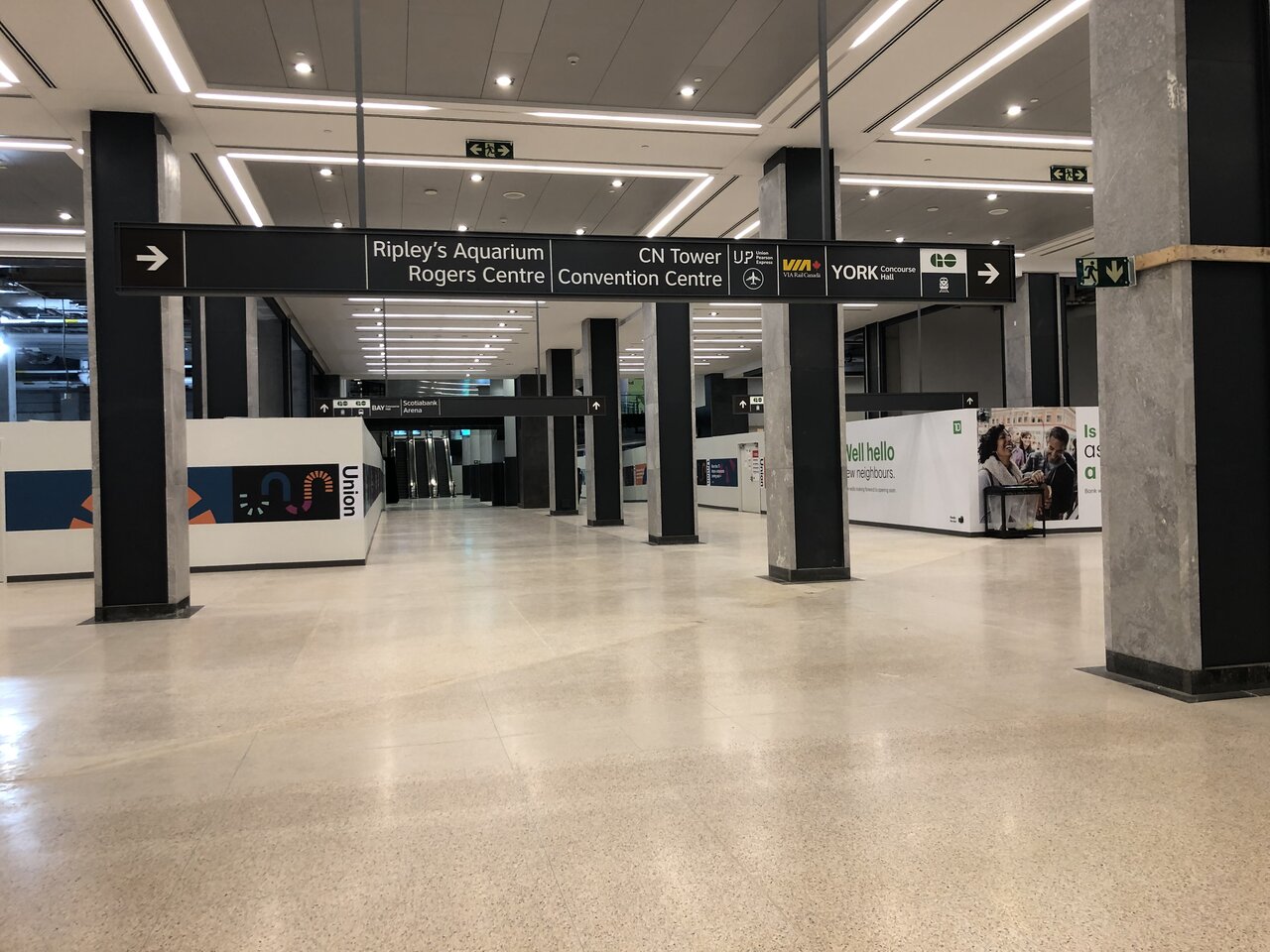 To be lined with shops: looking south through the Bay Promenade Hall, image by UT Forum contributor mburrrrr 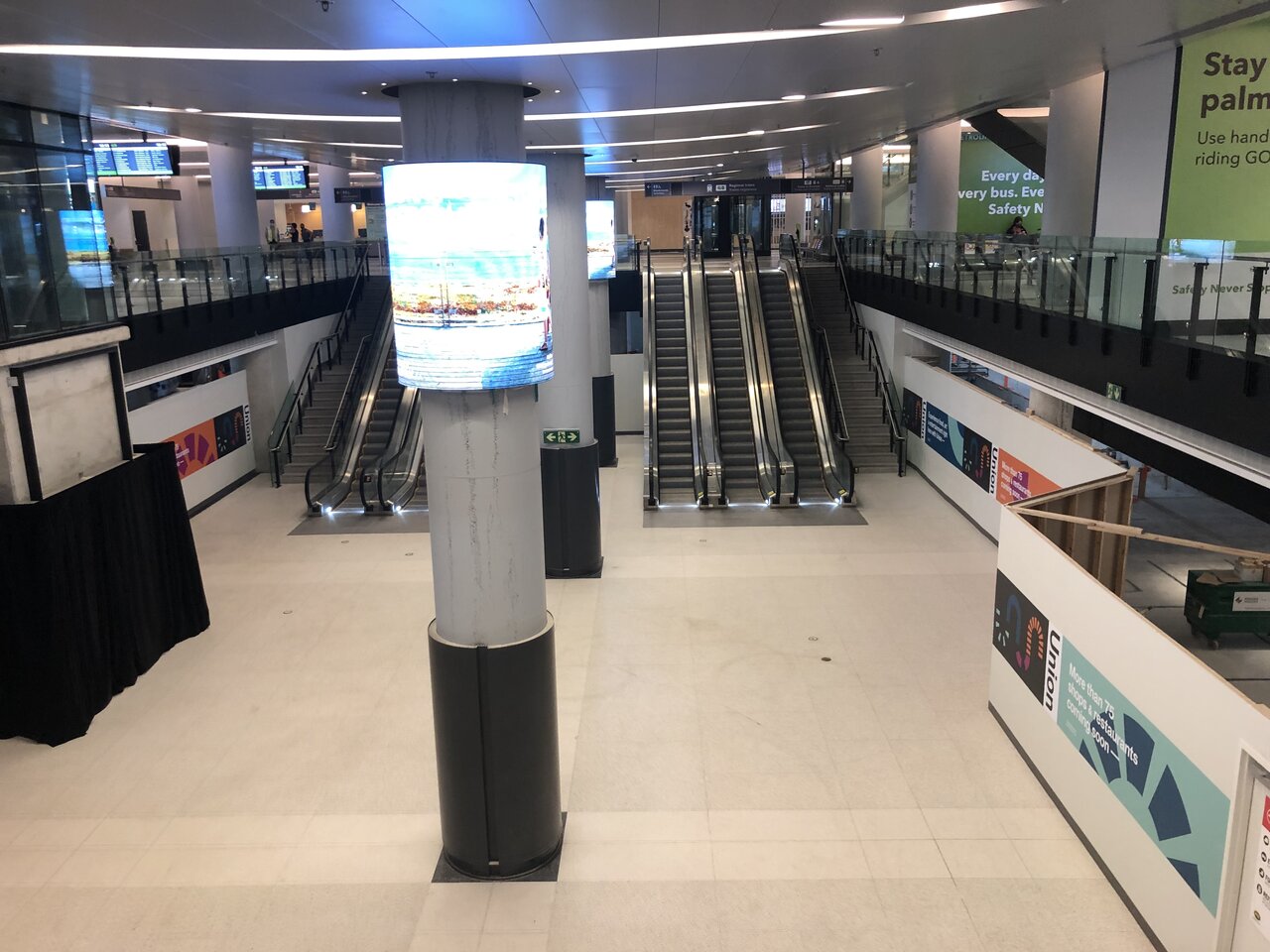 The GO Bay Concourse above, the Bay Promenade Hall below, image by UT Forum contributor mburrrrr

Below the GO Bay Concourse, the Bay Promenade Hall retail area will offer more than 3,300 m² of new retail space. It connects to the TTC subway station to the north (and the rest of Downtown through the PATH system), and to the Scotiabank Arena to the south (and the rest of the growing South Core area via two relatively new extensions to the PATH system). It will soon connect to the Fresh Market to the west, and then through to the Union Food Court. Osmington, head lessee at Union Station, plans to open the remaining retail units on an ongoing basis throughout 2022. Only a TD Bank retail branch has been named so far in addition to the existing retail tenants within the station. 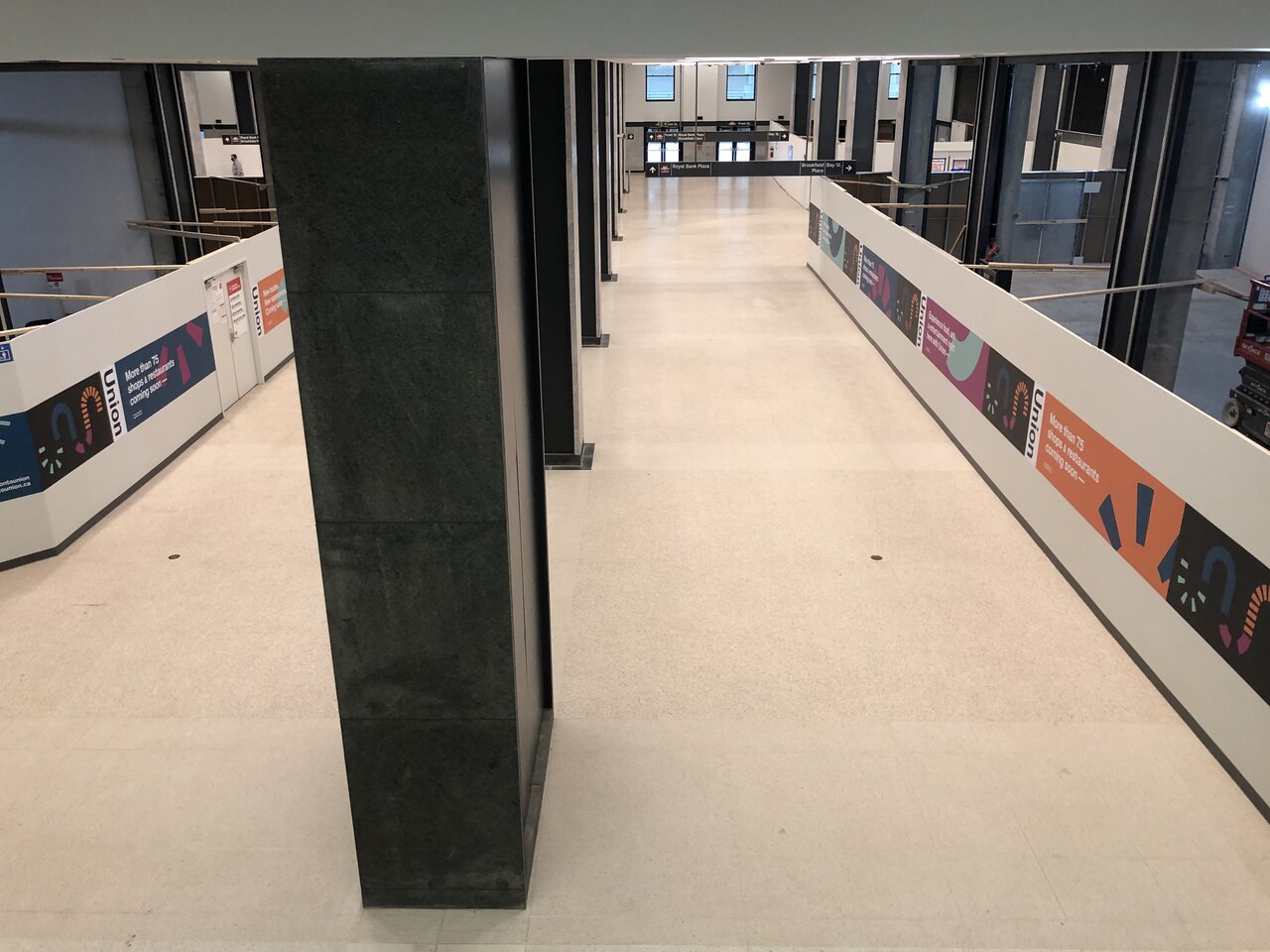 Looking down to the Bay Promenade Hall at Union Station from the GO Bay Concourse, image by UT Forum contributor mburrrrr

While the Mayor’s Office’s press release does not mention when retailers and restauranteurs may open to the Great Hall or the East Wing up at ground level, it does include that “Minor updates and cosmetic work will continue until the end of July 2021, at which point the project will conclude. This minor work will not impact customers and patrons visiting Union Station.” Were the end of July possible, that would mean the completion in four days of the repainting of the Front Street Promenade retail area’s ceiling (after removing flaking paint, apparently held up by a lawsuit against the original bankrupt contractor, Carillon), while new lighting would have to be installed in the Great Hall, along with other unspecified work. Public art also remains uninstalled in the Front Street Moat area, the German-based artists not having been able to travel here yet, something which can hopefully that can be remedied in the coming months with some easing of travel restrictions. 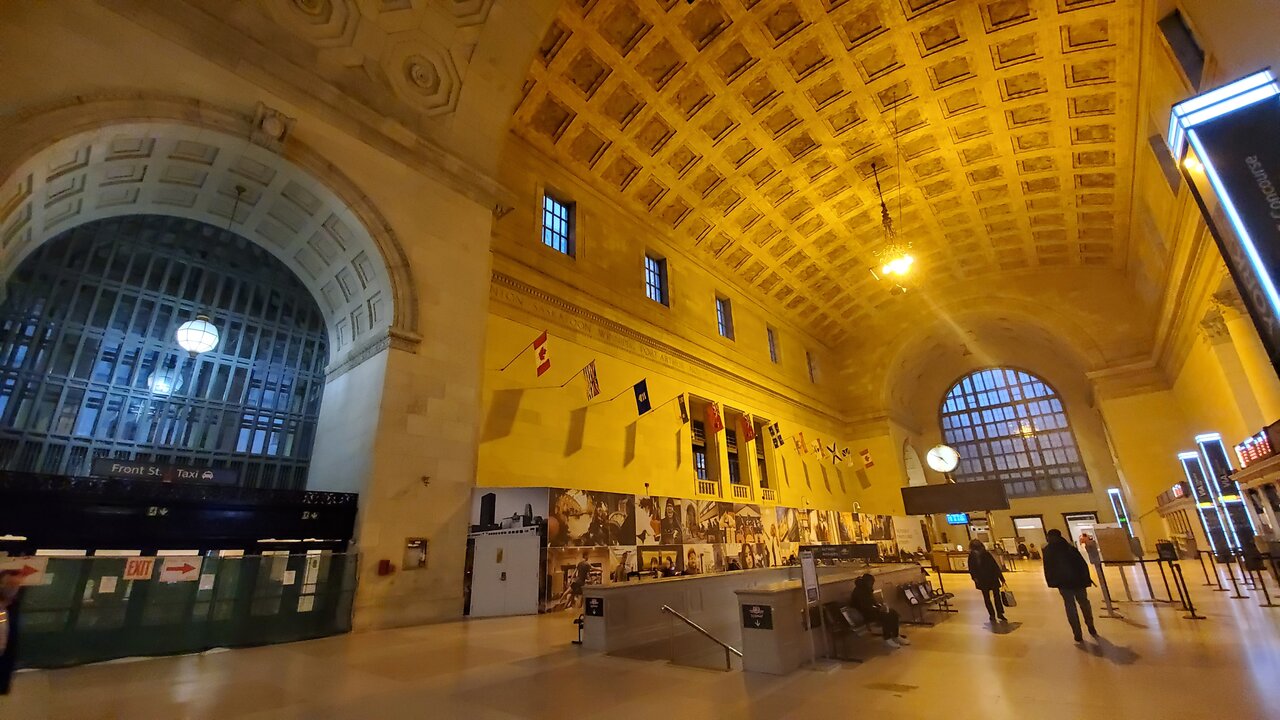 The Great Hall with its yellow lighting, image by UT Forum contributor Allandale25

The station was first opened in 1927. Its architecture is primarily in the Beaux-Art style. NORR and EVOQ have been overseeing the building’s expansion and modernization, while restoring aging fixtures and features. The building is a federally designated National Historic Site protected under a Heritage Easement Agreement. Osmington has engaged PARTISANS to oversee much of the outfitting of the retail spaces. New signage and wayfinding in the building is by entro. Many more photographic examples of the completed work can be seen in the posts by UT Forum contributor MAC on this page in our Union Station Revitalization thread.

You can learn more from our Database file for the project, linked below. If you’d like to, you can join in on the conversation in the associated Transportation Forum thread, or leave a comment in the space provided on this page.