Heritage Farmhouse To Be Saved at Sheppard East Redevelopment Site

A proposed development for a Sheppard Avenue East property sites a historic farmstead prominently at the forefront, promoting the house’s visual prominence and historic farmstead condition. JFJ Development Inc. submitted a combined Official Plan and Zoning By-law Amendment application to the City of Toronto late last year to redevelop the site at 589 Sheppard Avenue East with a new 14-storey mixed use building, set back from a heritage building rehabilitated for commercial use. 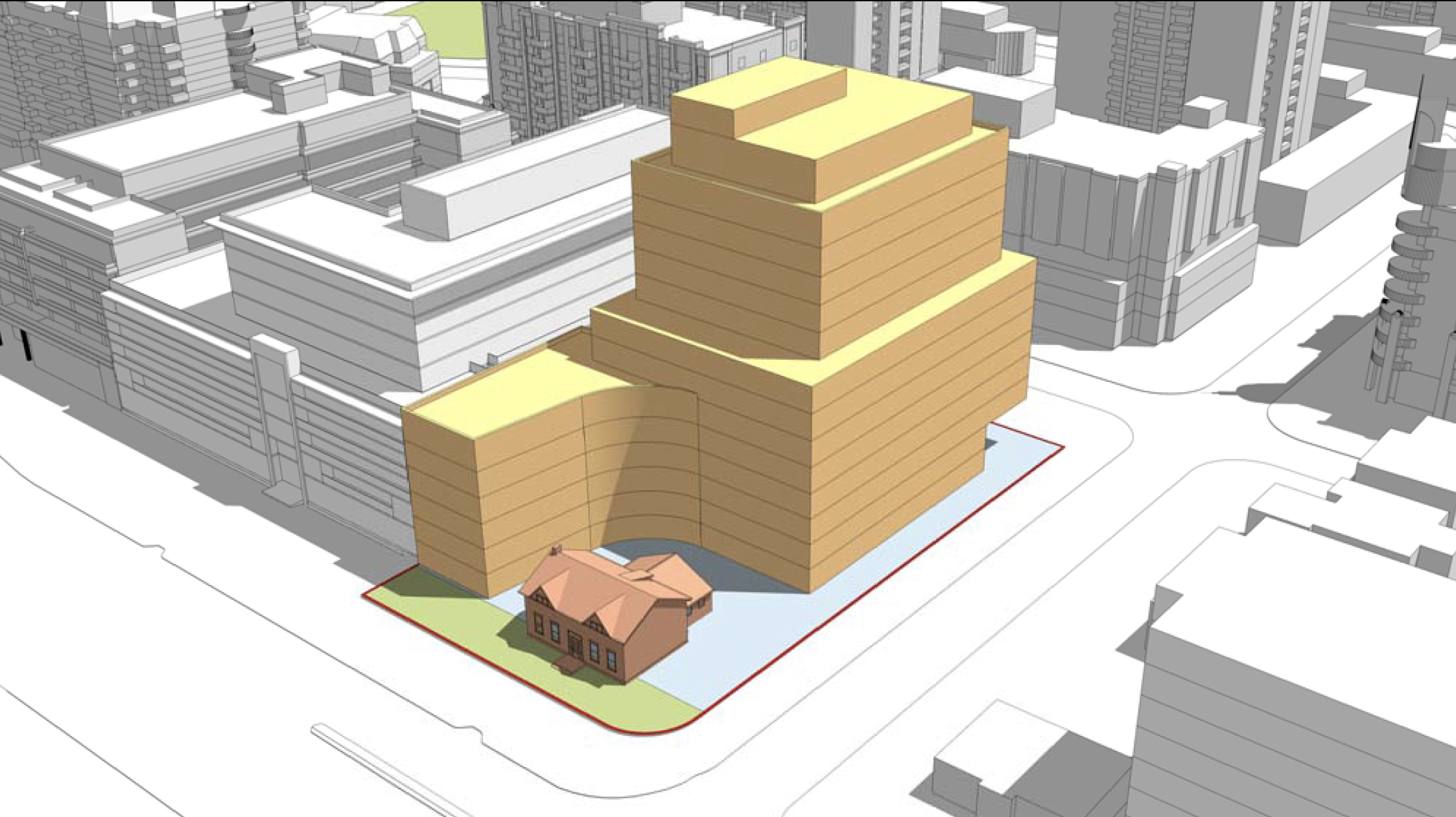 Looking southeast to a massing study of the proposed development, image by RAW Design for JFJ Development Inc.

The property is located at the southeast corner of Sheppard Avenue East and Barberry Place, 120 metres east of the Bayview subway station. It is currently occupied by three single-detached dwellings, including the Thomas Clark House (c.1855), which is designated under the Ontario Heritage Act. 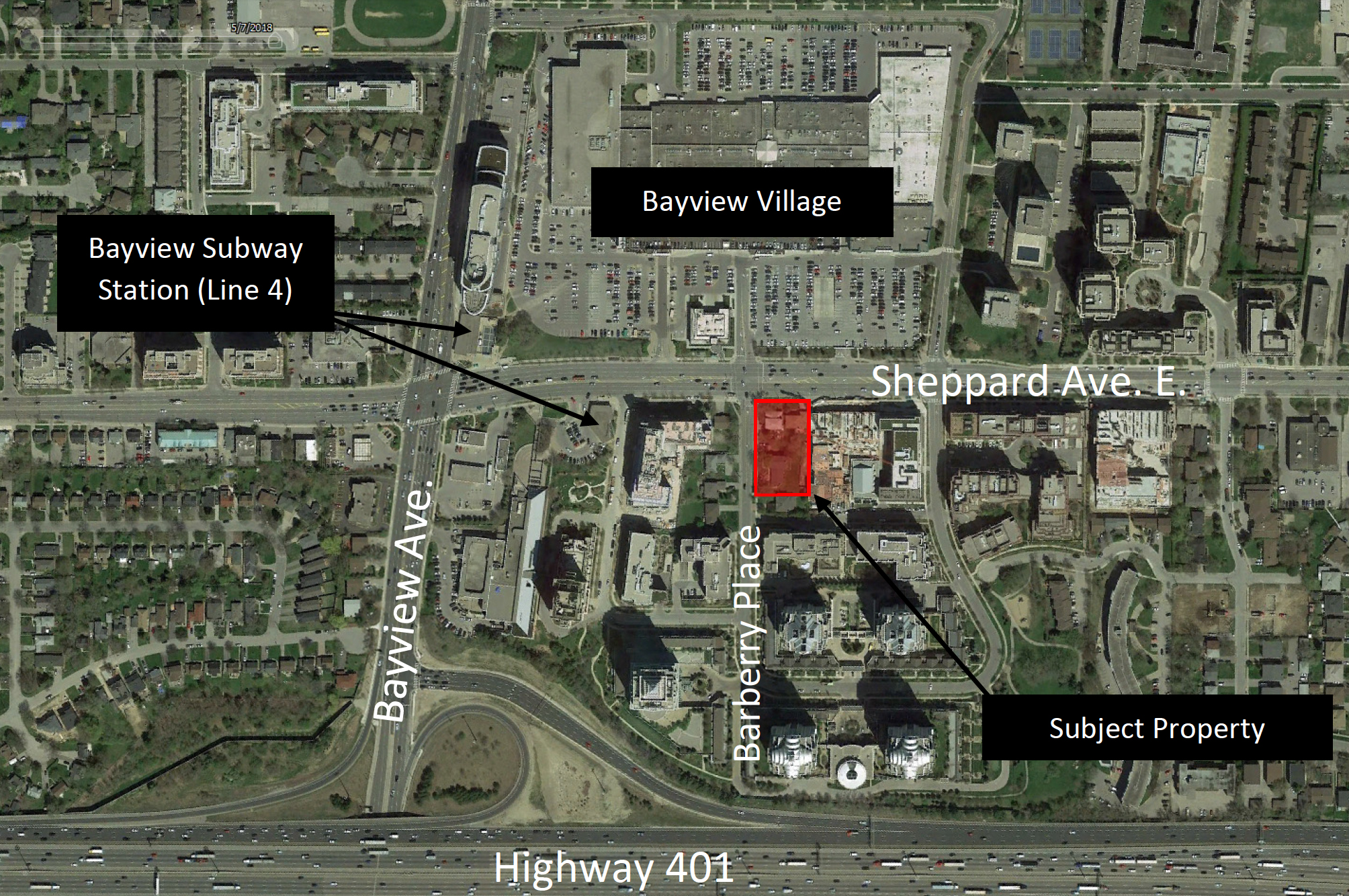 The emerging neighbourhood context includes mid to high-rise residential development of the area’s previous single detached homes, only a few of which remain among the recent multi-family developments. The Bayview Village Shopping Centre is situated across Sheppard to the north, a few single detached dwellings across Barberry to the west, a 10-storey mixed-use building to the east, and immediately south, a house which will soon be demolished to make way for the completion of Thomas Clark Way. 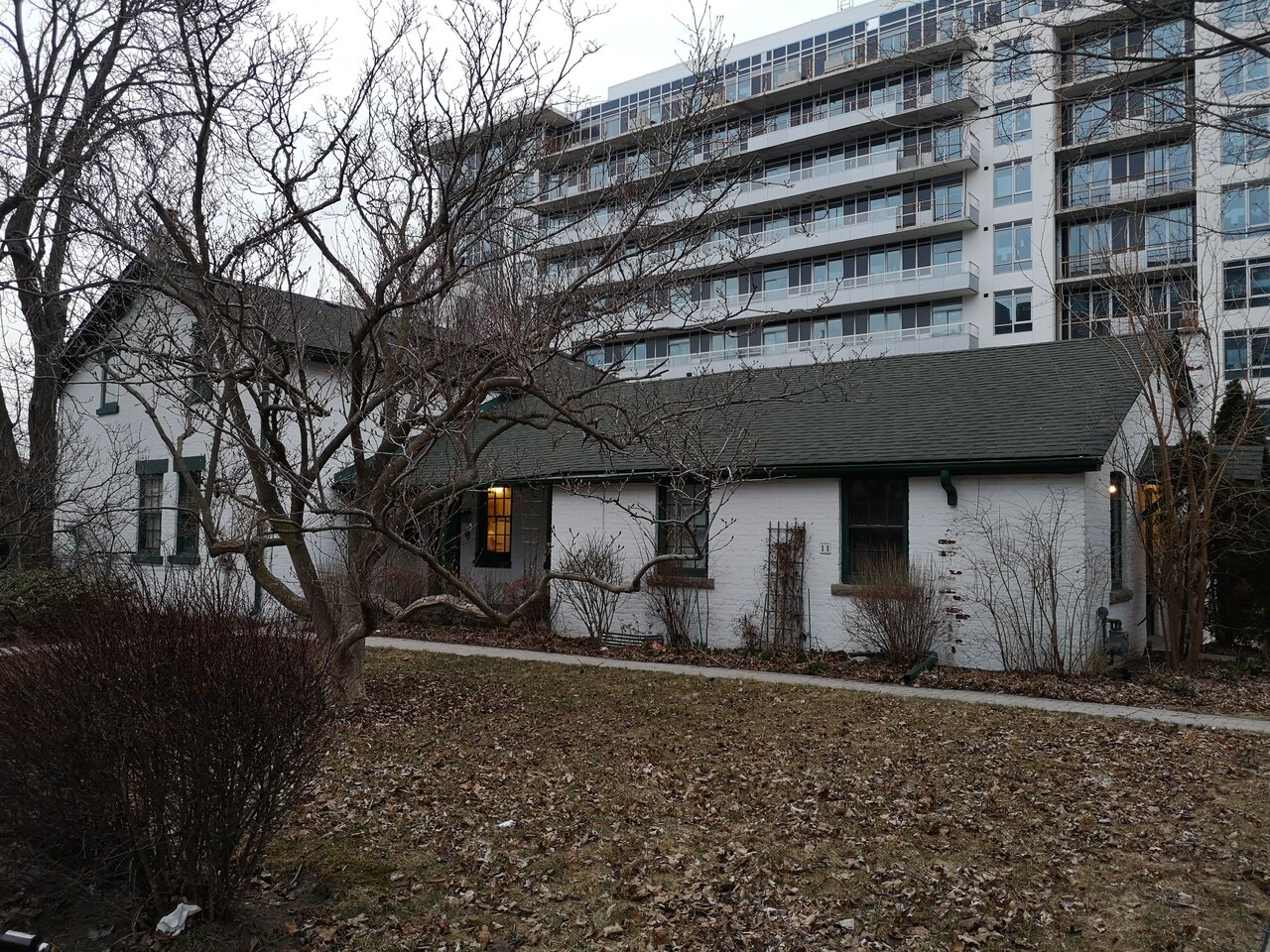 The Thomas Clark House (1855) at 9 Barberry Place, is the only structure that remains from the area’s pioneer past, image retrieved from Google Maps

The proposal with architectural work by RAW Design—so far without an exterior expression—involves demolishing the two houses fronting on Sheppard and moving the Thomas Clark House northward, then constructing a 6 and 14-storey, mixed-use building to the south and east of the relocated heritage building. The latter would be restored and adaptively re-used for a public-facing commercial use and will sit prominently within the context of new construction and parkland dedication along the Sheppard Avenue streetscape. Its interior and exterior heritage attributes would be maintained, as determined by heritage specialist ERA Architects. The house’s 1946-built rear addition would be removed. 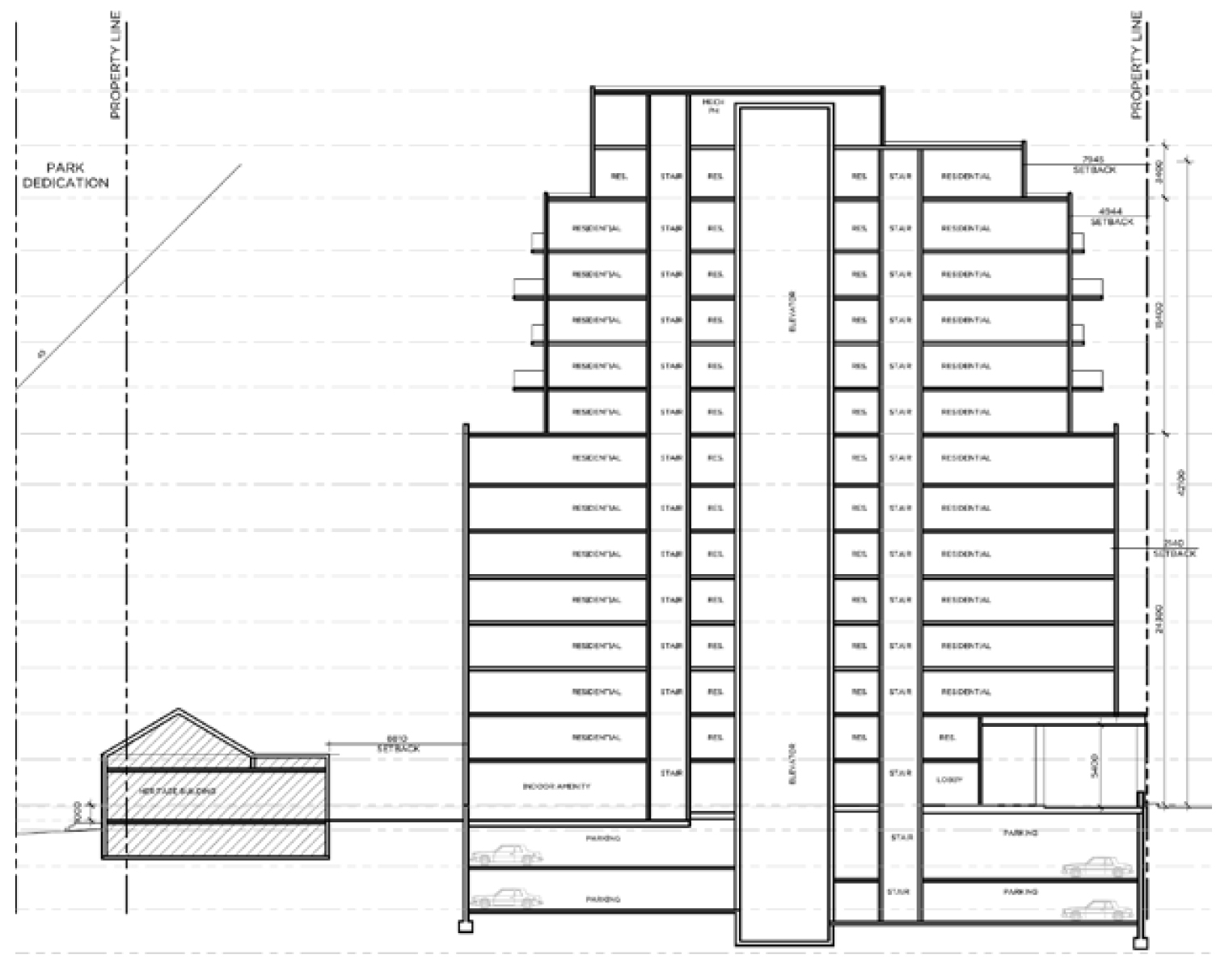 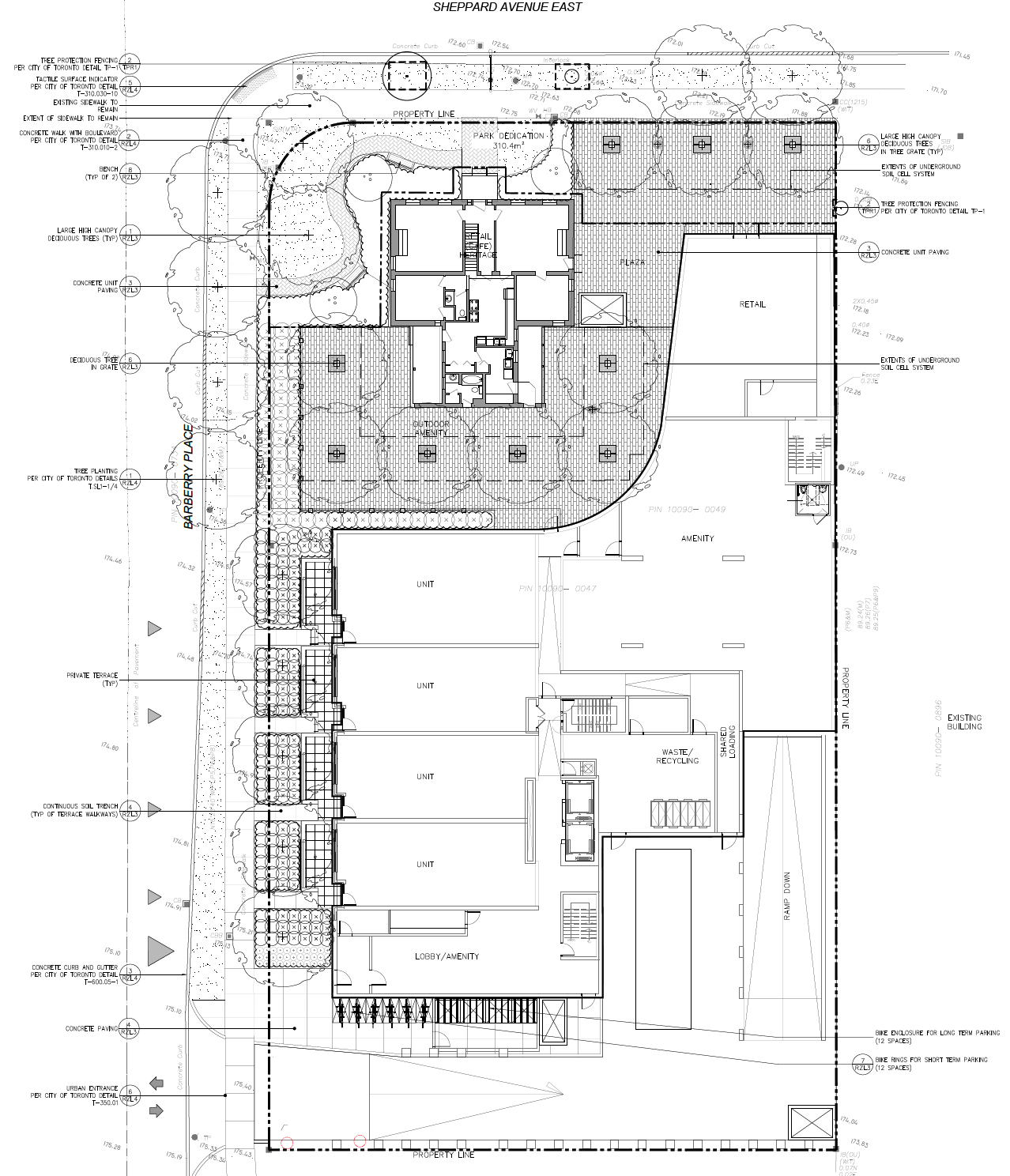 A 310 m² linear park is proposed on the Sheppard Ave. E. frontage. It extends south on Barberry Place, wrapping around the west side of the relocated structure, where it connects to a 302 m² private outdoor amenity area.

A multi-use indoor amenity area, provided on the ground floor of the new building, would be directly accessible to this landscaped, outdoor amenity space. An additional, 33 m² outdoor terrace is proposed on the north side of the 9th floor. 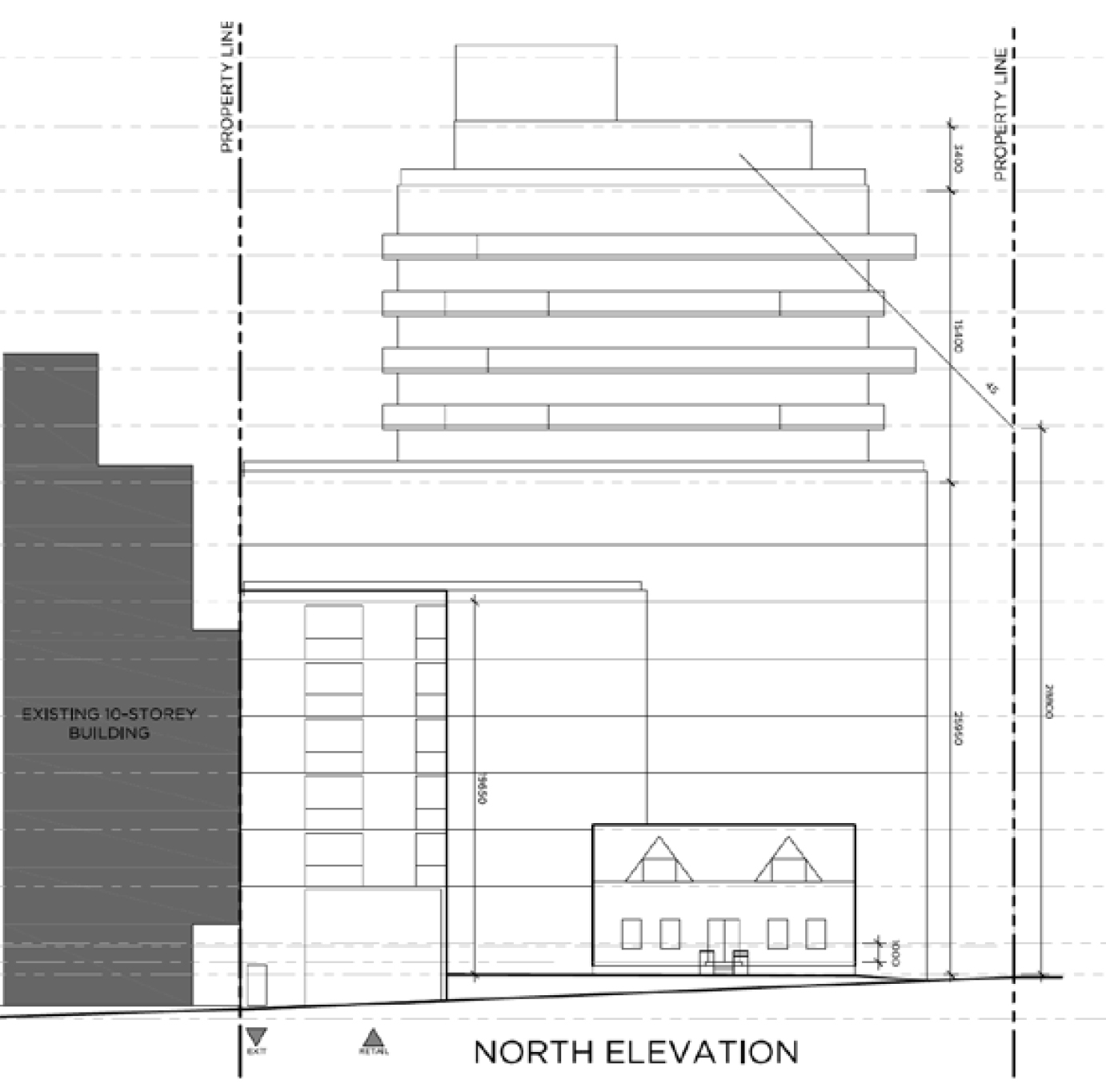 Two levels of underground parking would provide space for 102 vehicles, and 112 bicycles, accessed from a driveway at the south end of the property.