Heritage-sensitive Development Comes to ‘The Castle’ in Liberty Village

On May 21, 2021 a Zoning By-law Amendment application was submitted by Sweeny &Co Architects to the City of Toronto on behalf of Allied Properties REIT for a 32,297 m² mixed-use office/commercial development in Liberty Village. 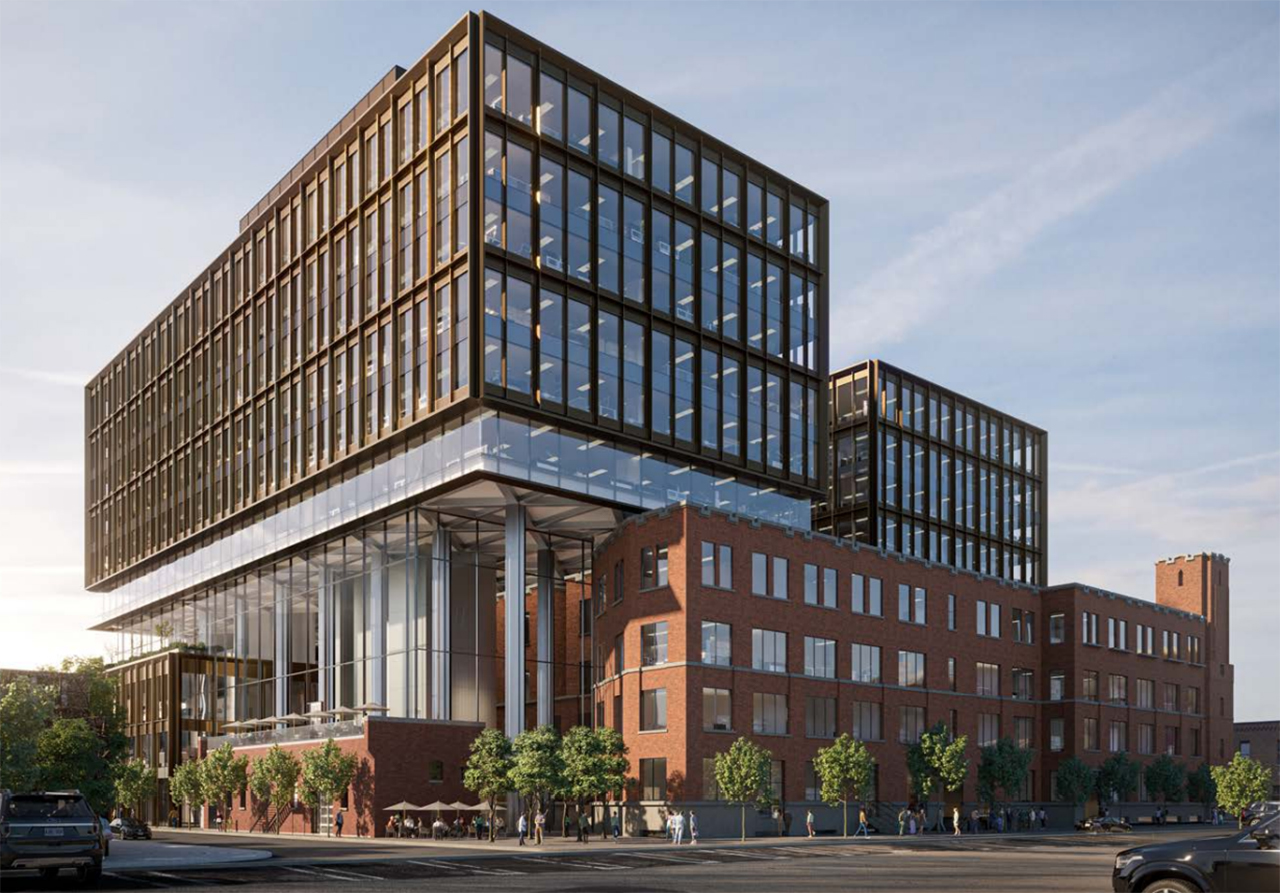 Rendering looking south-west from Liberty Street and Pardee Avenue, image via submission to City of Toronto

The proposal, which has been dubbed ‘The Castle Block’ for the distinctive crenelation and prominent tower on the southeast corner of Fraser Avenue and Liberty Street, preserves the six heritage buildings on site, with two new office towers—at ten (50.33 m) and eleven storeys (55.36 m)—to be built on top. 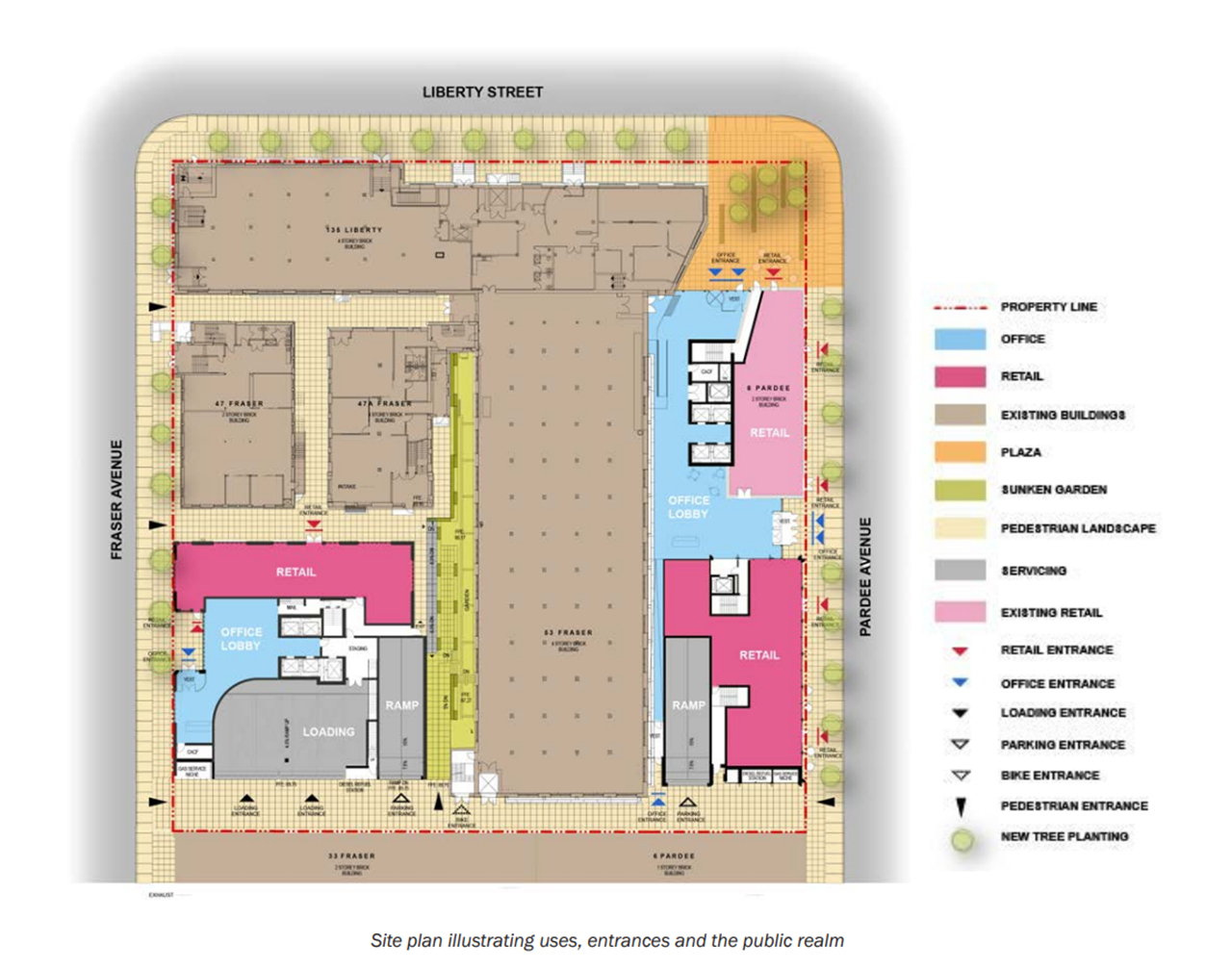 The taller tower will front onto Pardee Avenue, with six stories of office sitting atop a new podium built on the site of an existing surface parking lot. A four-storey atrium will connect the new building with the adjacent heritage buildings, 8 Pardee Avenue and 53 Fraser Avenue, forming part of a new pedestrian network through the site. 8 Pardee will be deconstructed and rebuilt to facilitate the construction of underground parking; the other five buildings will be retained in-situ, with only minor alterations.

Axonometric views of the site showing the proposal’s relationship to the heritage context, image via submission to City of Toronto 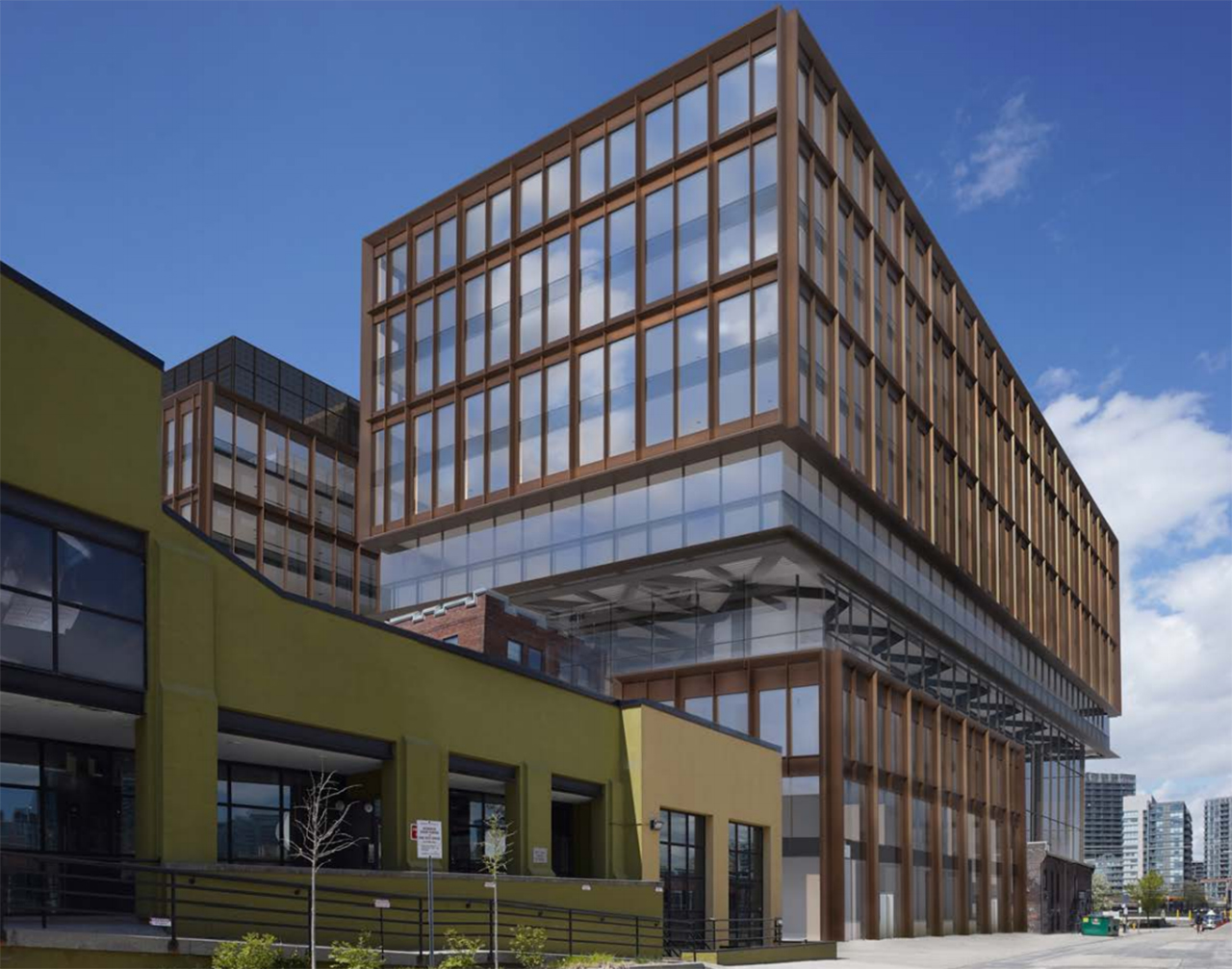 Rendering of Pardee Avenue facade, image via submission to City of Toronto

On the west side of the site, the shorter, ten storey tower will be set above 41, 47, and 49 Fraser Avenue; the spaces between these buildings will contribute to the open-air part of that new pedestrian network, complementing the new laneway spanning between Fraser Avenue and Pardee Avenue at the site’s southern edge, along a route that is currently obstructed by loading docks. 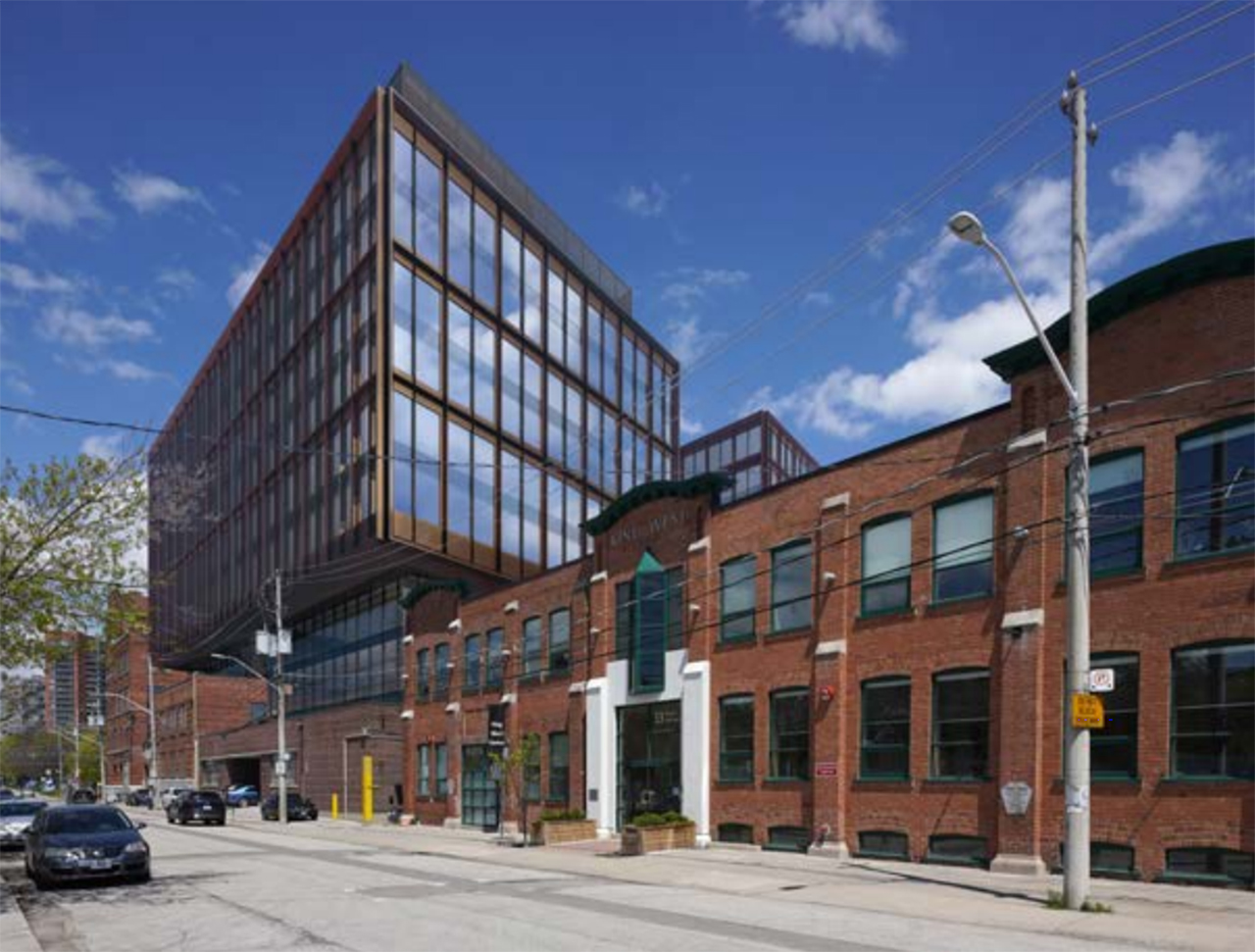 Rendering of Fraser Avenue facade, image via submission to City of Toronto

The landscape plan, by NAK Design Strategies, also includes extensive renovations to the public realm along the site’s perimeter, stitching together the inconsistent sidewalk network and adding street trees. A new public plaza is proposed for the corner of Liberty Street and Pardee Avenue. 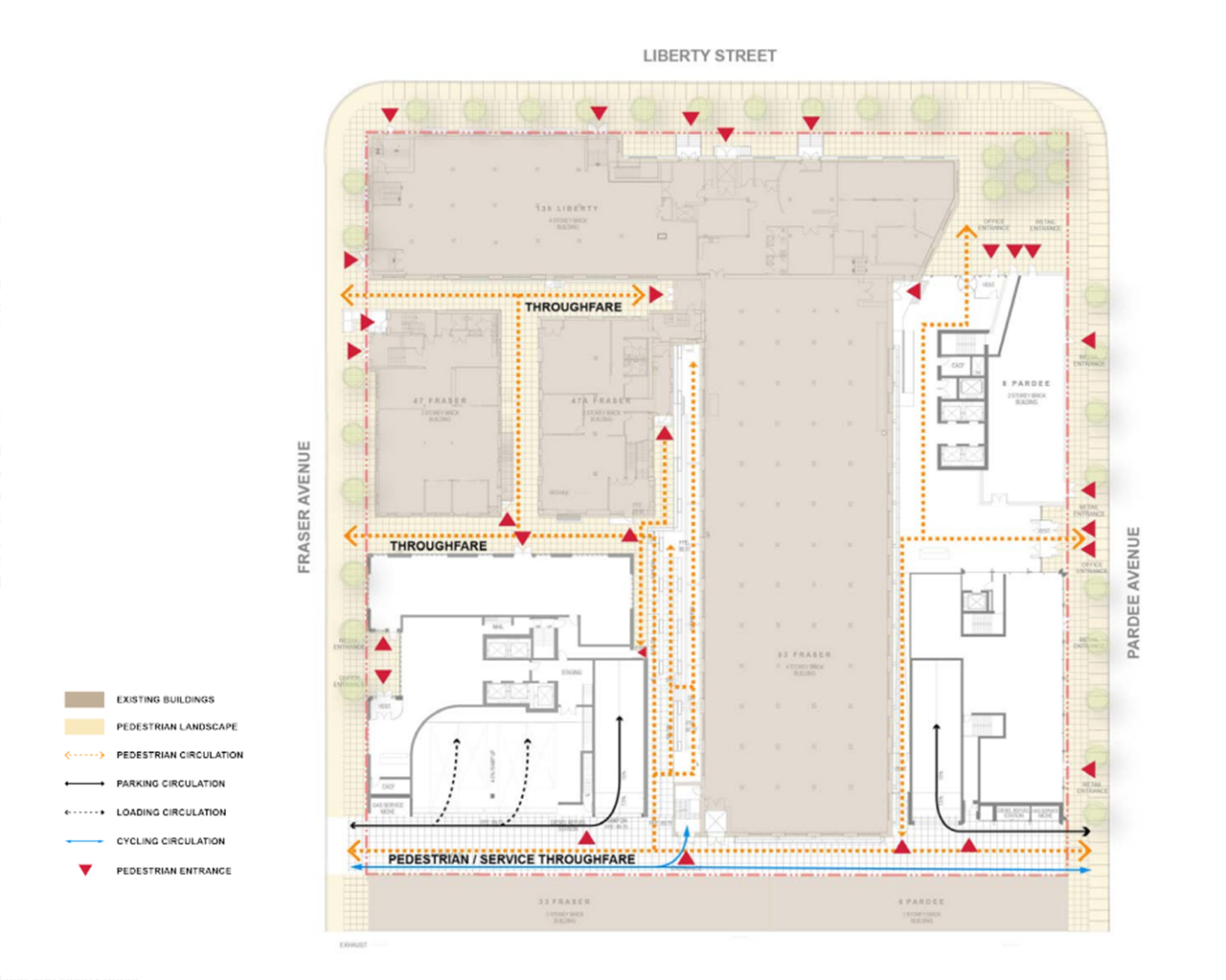 Development on the site was the subject of some controversy after the Toronto Heritage Board moved to designate several buildings, in contravention of an understanding between the City and the developer that the site would be developed in a heritage-sensitive way. That understanding, which was the result of two years of cooperation and discussion, is likely reflected in the plan which has now been submitted for approval. 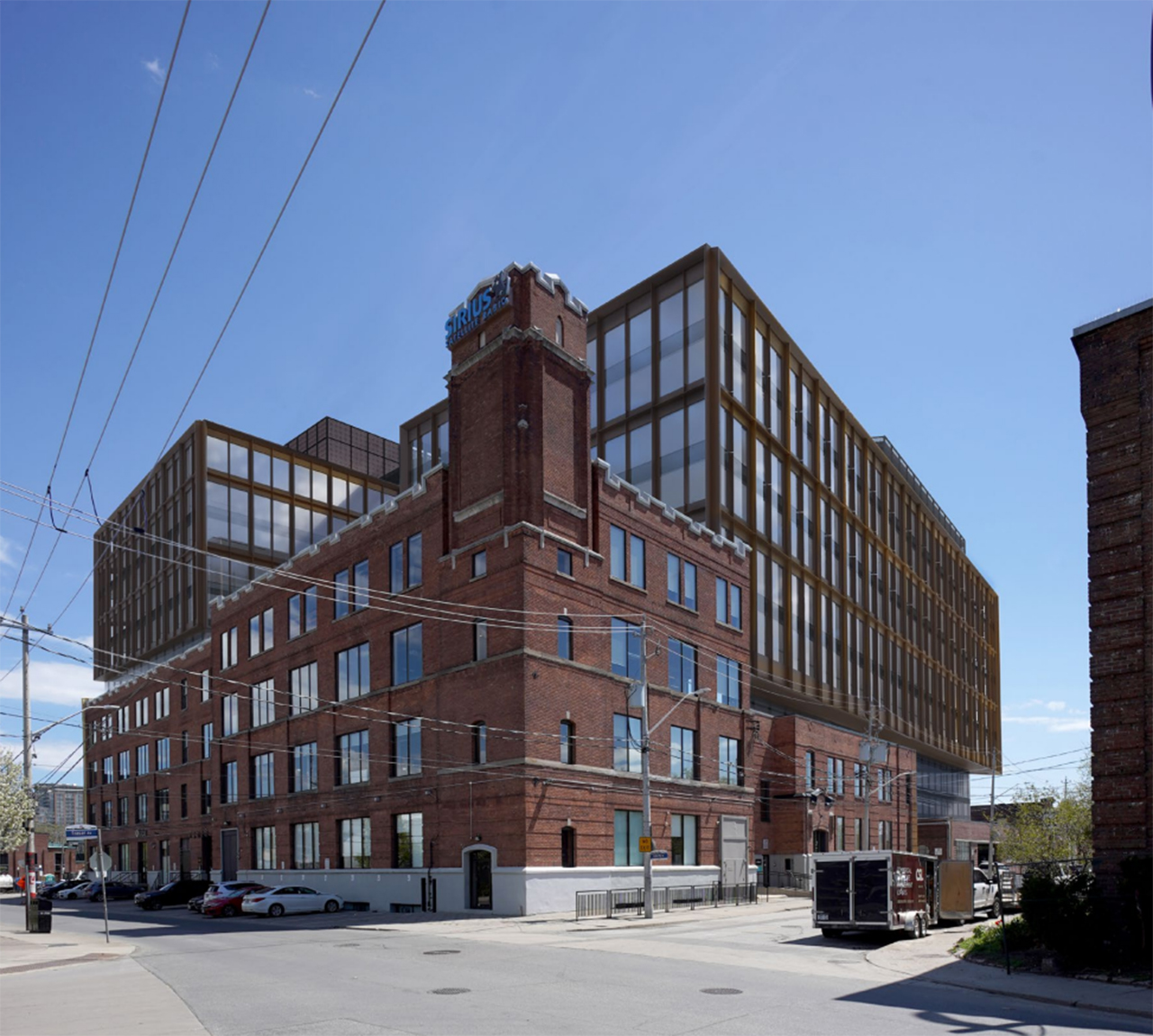 Rendering looking south-east from Liberty Street and Fraser Avenue, with the distinctive &quot;Castle&quot; tower in the foreground, image via submission to City of Toronto