Toronto is one of the largest cities in North America, and compared to other great cities on the continent with a metro system, it is moving through what is by far the largest subway expansion program.

The city has enormous transit expansion plans, and that extends beyond subways to several under construction and in development light rail lines in the Greater Toronto and Hamilton Region as well as a revolutionized regional rail network tying the various new lines together with the existing TTC network, which by itself is one of the largest transit projects on the continent as well.

Before I talk about the details of what is being constructed, I’d like to mention the specific technologies being used. When I reference Line 5, that’s a tram style train operating in a tunnel. The Scarborough and Yonge North extensions though will be full TTC style subway trains operating on the bespoke TTC gauge. The Ontario Line? A standard gauge metro, that would be at home in Sydney or Amsterdam.

So, what are we building, how did we get here, and how will it change Toronto?

Toronto is building a mixture of both new subway lines and extensions of the existing TTC network. Currently under construction is the Crosstown LRT or TTC Line 5 which has been in the works for the better part of a decade. Line 5 will feature a ten kilometre subway from Weston Road in the former Borough of York to Laird Drive in Midtown Toronto with connections to both Eglinton West (soon to be renamed Cedarvale) and Eglinton Station on Line 1, as well as a 9 kilometre surface tramway continuing east to Kennedy Station on Line 2. Line 5 will add 11 new stations to Toronto’s subway network and add much needed east-west connectivity to areas of the city north of Bloor Street. While Line 5 has had its share of delays, opening is set for some time in 2022. 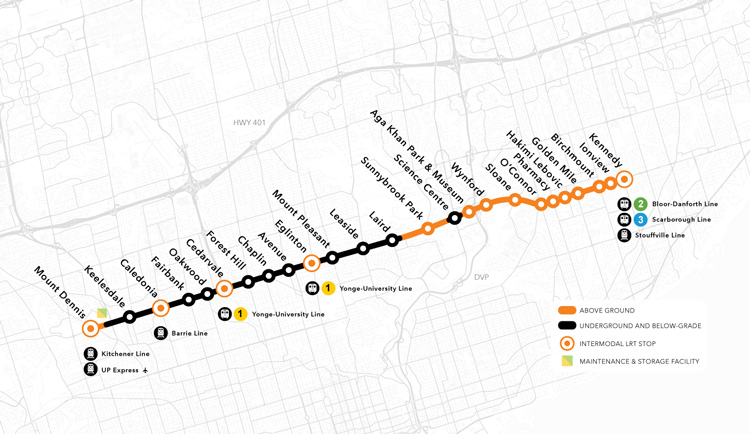 Perhaps more exciting than Line 5, are the next wave of subway projects which aim to increase the density of the subway network in the core of the city, as well as extend it further east, west, and north than it has ever gone. 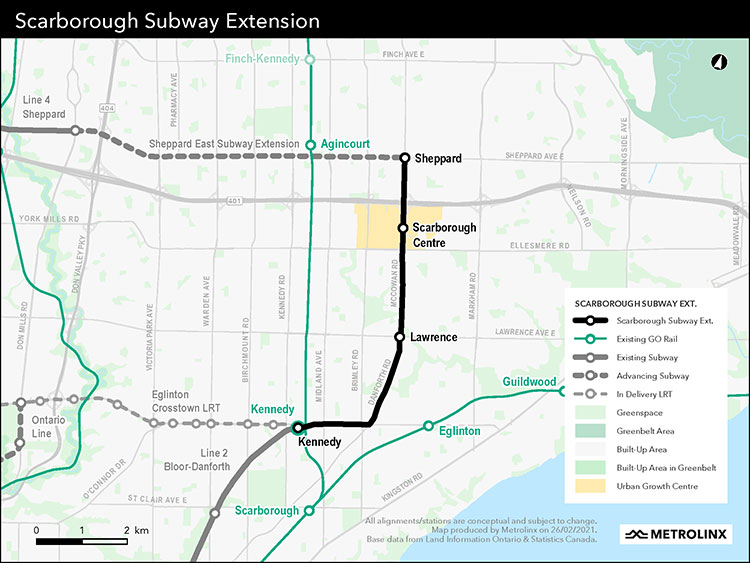 The second of the next wave projects is the Eglinton Crosstown West subway extension, this project aims to extend the currently under construction Line 5 subway west from its initial western terminus at Mt. Dennis Station along Eglinton on both elevated guideways and within a tunnel to Renforth Station on the eastern end of the Mississauga transitway. 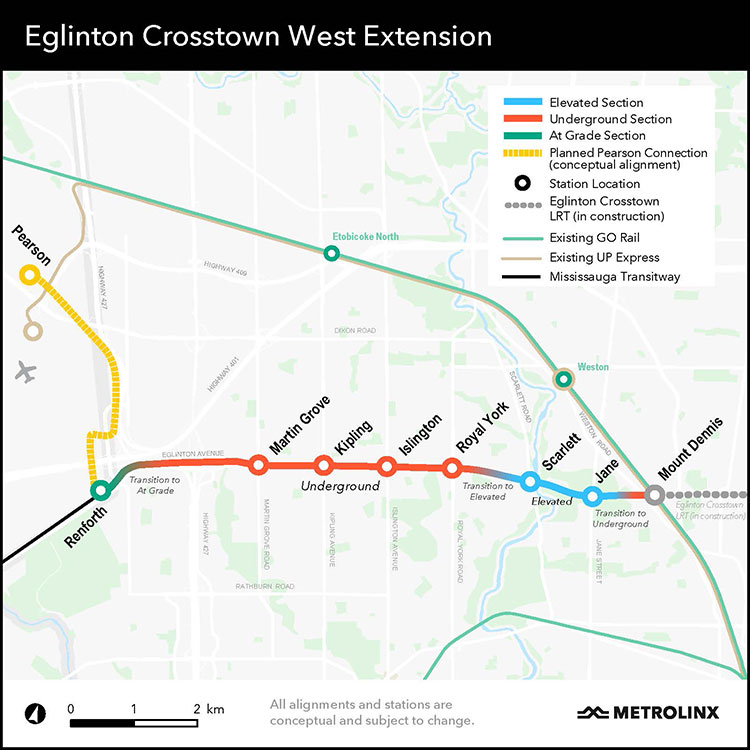 The third extension project is the Yonge North subway extension, taking the TTC’s Line 1 subway north along Yonge street past Steeles Avenue into York Region, with a terminus just north of Highway 407 at Richmond Hill Centre. This project will be largely underground except to a short above ground section at its northern end, and has had some stations cut from it to reduce its cost. The construction of the Yonge north extension should enable YRT / Viva to rearrange and increase services with the northern subway terminus as a new hub, for various BRT and local bus routes. 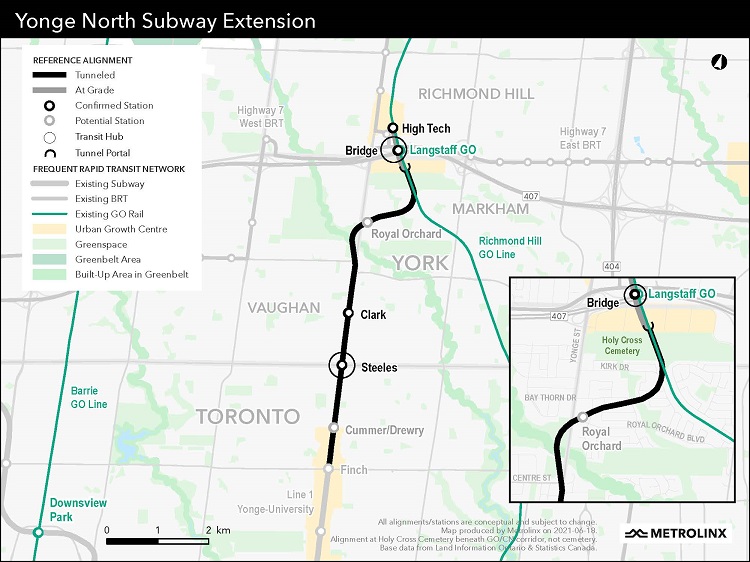 The last project in the next wave is the much talked about Ontario Line. This subway line will link destinations on the shoulders of downtown with the core via Queen Street while also relieving the congested Bloor-Yonge subway interchange and providing service north of Bloor to Thorncliffe and Flemingdon Parks. This project primarily differs from the long envisioned Relief Line in its use of more standard trains, as opposed to traditional TTC ones which resemble the specifications of the original subway constructed in 1954, enabling improved safety and performance. The line is also planned to be fully automated and feature platform screen doors, improving safety and bringing it in line with new subways constructed in places such as Seoul. 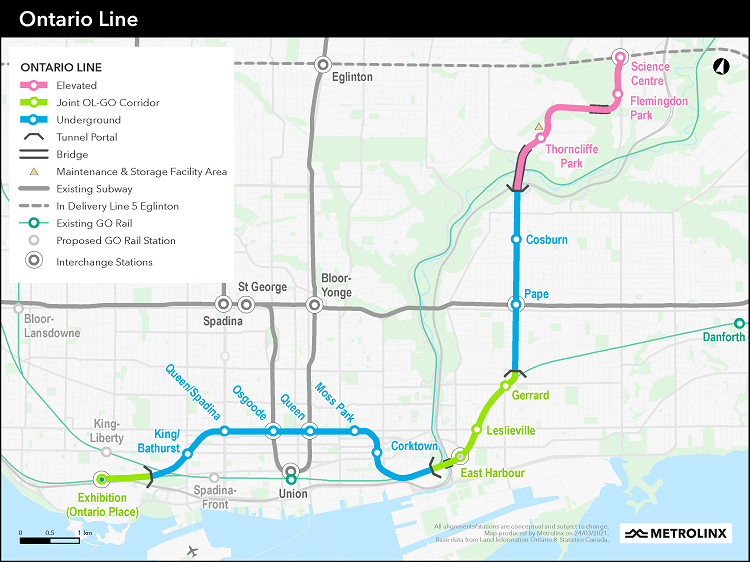 Now of course, a big part of the story here is that of how Toronto, famous for its politically gridlocked transit planning, was able to turn the tide and move so many projects forward.

You could say it all started with the famous (or famously bemoaned) “Subways, Subways, Subways!” chant of late mayor Rob Ford, who is perhaps best known for his low opinion of street-based transport and his favouring of underground rail, likely more because of a reduced impact on cars rather than the superior transit experience provided. While during Ford’s tumultuous time in office little headway was made enacting his vision of subways criss-crossing the city, things changed in a big way when his brother Doug Ford was elected premier of Ontario in 2018. It would be less than a year later that Ford, along with top government officials announced the aggressive subway expansion scheme, which includes a subway grazing the edge of the premier’s riding. The Ontario Line would be the centrepiece of this plan, its name derived from its connecting of the Ontario Science Centre at its northern terminus and Ontario Place at its southern terminus—and probably also as a not-so-masked reminder that the city is not really in full control of its destiny.

Keeping that in mind, the hyper-aggressive proposed delivery schedule, which has already been extended somewhat, is still seen as optimistic, and the price of the Ontario Line pales in comparison to the City’s previous Relief Line plans on a unit distance basis, so how is that possible? The Ontario Line takes a far more progressive approach to subway building than lines seen before have, with sections running above ground parallel to mainline rail as well as on elevated guideways for the line’s northern stretch. This reduction in tunnelling as well as isolated operations have enabled a less risky and less expensive project. 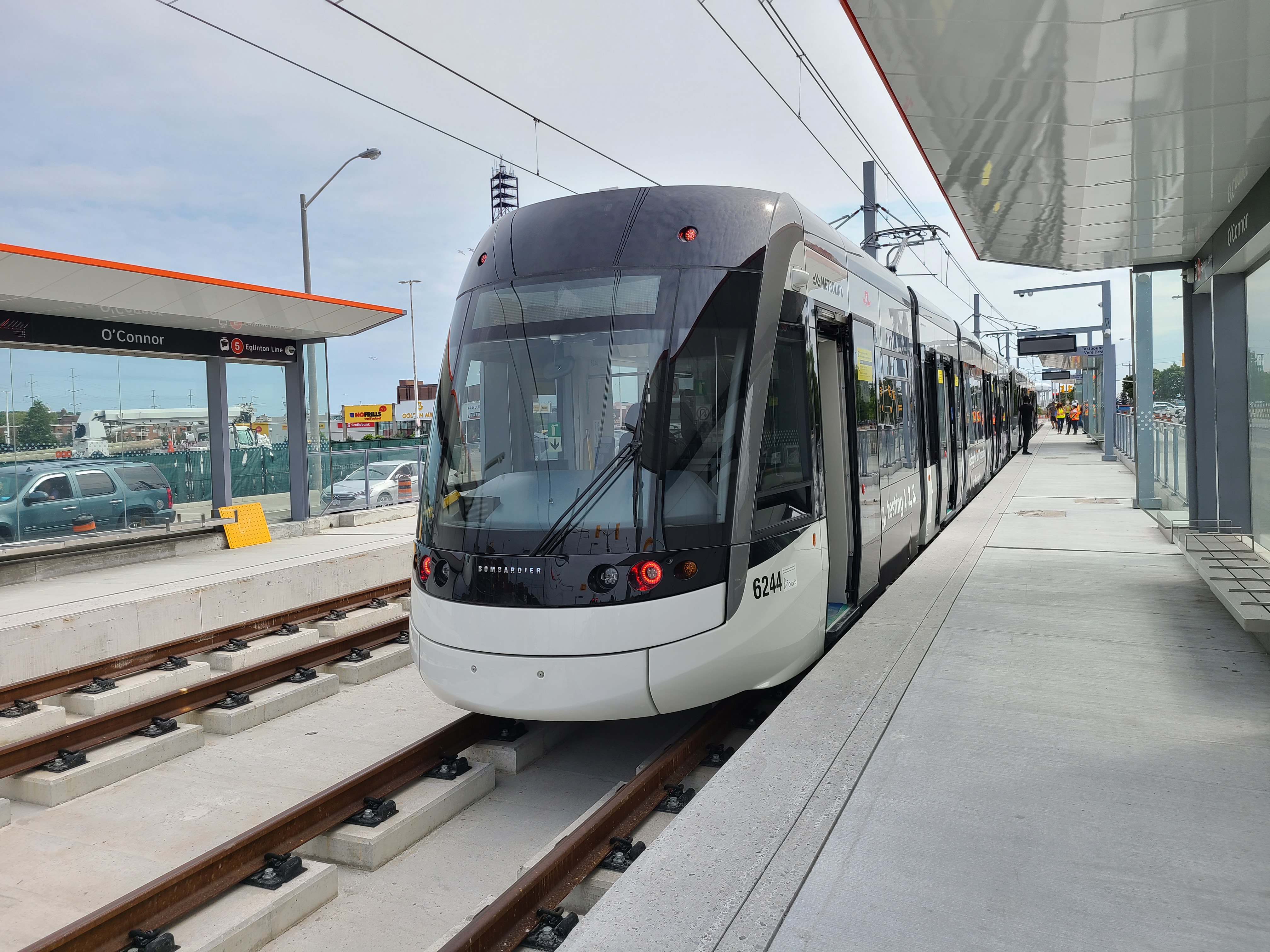 With that in mind, not all of the proposed projects seem to have benefitted from this balanced approach. As previously mentioned, the subway extension projects are largely underground and in bored tunnels, and not always for good reason. The Eglinton West extension travels along a road which is wide and not unlike locations where elevated operation or even cut and cover tunnelling have been utilized in other Canadian cities. While Toronto is aggressively expanding its subway network, Vancouver’s SkyTrain surpassed the Subway in length a few years ago despite starting construction roughly 30 years later, largely on the back of mostly elevated construction. Meanwhile the Réseau Express Metropolitan regional metro in Montreal is perhaps the most aggressive single transit project in the Americas and is also heavily utilizing elevated guideways. Even disregarding the obvious option of elevated transit already planned for use on the Ontario Line, the style of construction planned for use across Toronto’s expanding subways pays little mind to global best practice in order to reduce construction costs, largely to avoid ruffling feathers and any departure from the business as usual approach to transit construction in much of North America.

Of course, there are other people who have helped enable this massive expansion scheme, with Toronto Mayor John Tory’s balanced approach helping projects gain city approval. While a highly transit-supportive federal government led by Justin Trudeau has hardly batted an eye at spending over $10 billion to support the various projects. This alignment of the right political forces has likely been critical to seeing them move forward.

All of these projects will, perhaps more than any other initiative, change the face of Toronto in coming decades—the city as it’s been known since the late 20th century will slowly fade as a new more connected city replaces it.

For one, subway lines will extend to more of the City of Toronto than ever before, while reducing overcrowding and congestion on the existing subway network. At the same time, Peel Region with over 1 million residents will finally have a subway connection—if only just barely.

Areas of Toronto which have seen meteoric rises in population in recent years will no longer rely solely on congested transit routes like the 504 King streetcar. Neighbourhoods like Liberty Village and Corktown will finally see subway access to meet their massively densified urbanism. 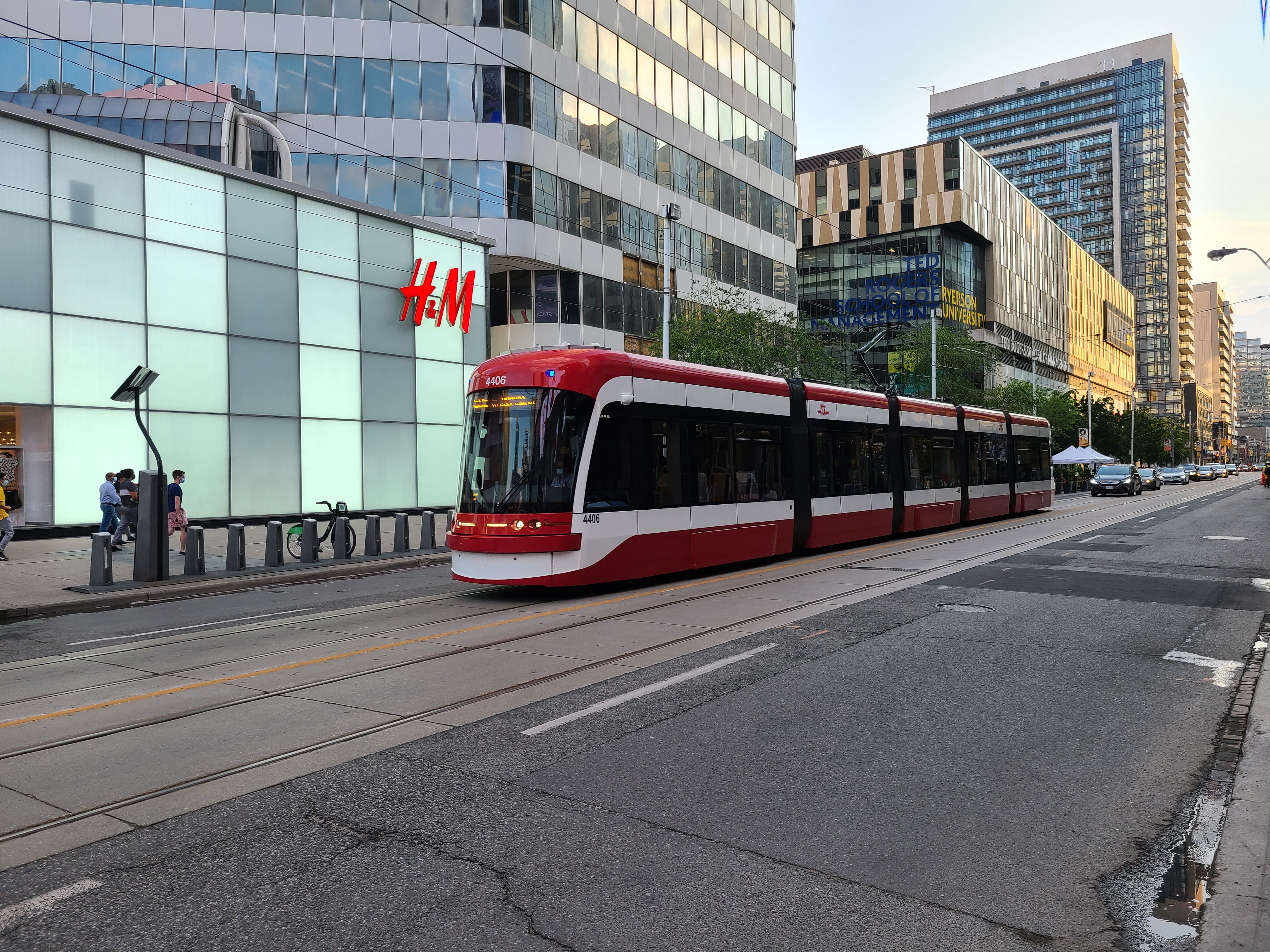 Existing sections of the network, like the Yonge Subway, will have significantly more space heading into the downtown core enabling more transfers and connectivity from corridors like Eglinton and Sheppard avenues, while extensions enable entirely new trips to be made on rapid transit such as from York Region to North York Centre.

Regional Rail will finally see better connections to the subway system, (mostly) gone will be the long trudges along neighbourhood streets, replaced with seamless indoor transfers at new hubs like East Harbour and Mount Dennis.

Of course, perhaps most importantly the investments made in the projects starting construction soon or already under construction, will help enable future growth of the Toronto region’s rapid transit network beyond what it will be even with these projects. Rapid transit connections deep into Peel Region and to Pearson Airport, and a new rapid transit trunk through Toronto’s city centre will mean so many possibilities for this great city that we have not even imagined yet.

If you’d like to, you can join in on the conversation in various threads in our Transportation and Infrastructure Forum, or leave a comment in the space provided on this page.