KingSett Proposes 18-Storeys on Bloor in the Junction Triangle

A stretch of aging houses—some occupied, some vacant—along Bloor Street West in Toronto’s Junction Triangle could be cleared for an 18-storey mixed-use building. Developer KingSett Capital has submitted a Zoning By-law Amendment application to redevelop the site with a development that would bring retail, a community centre, and over 200 dwelling units to the neighbourhood. 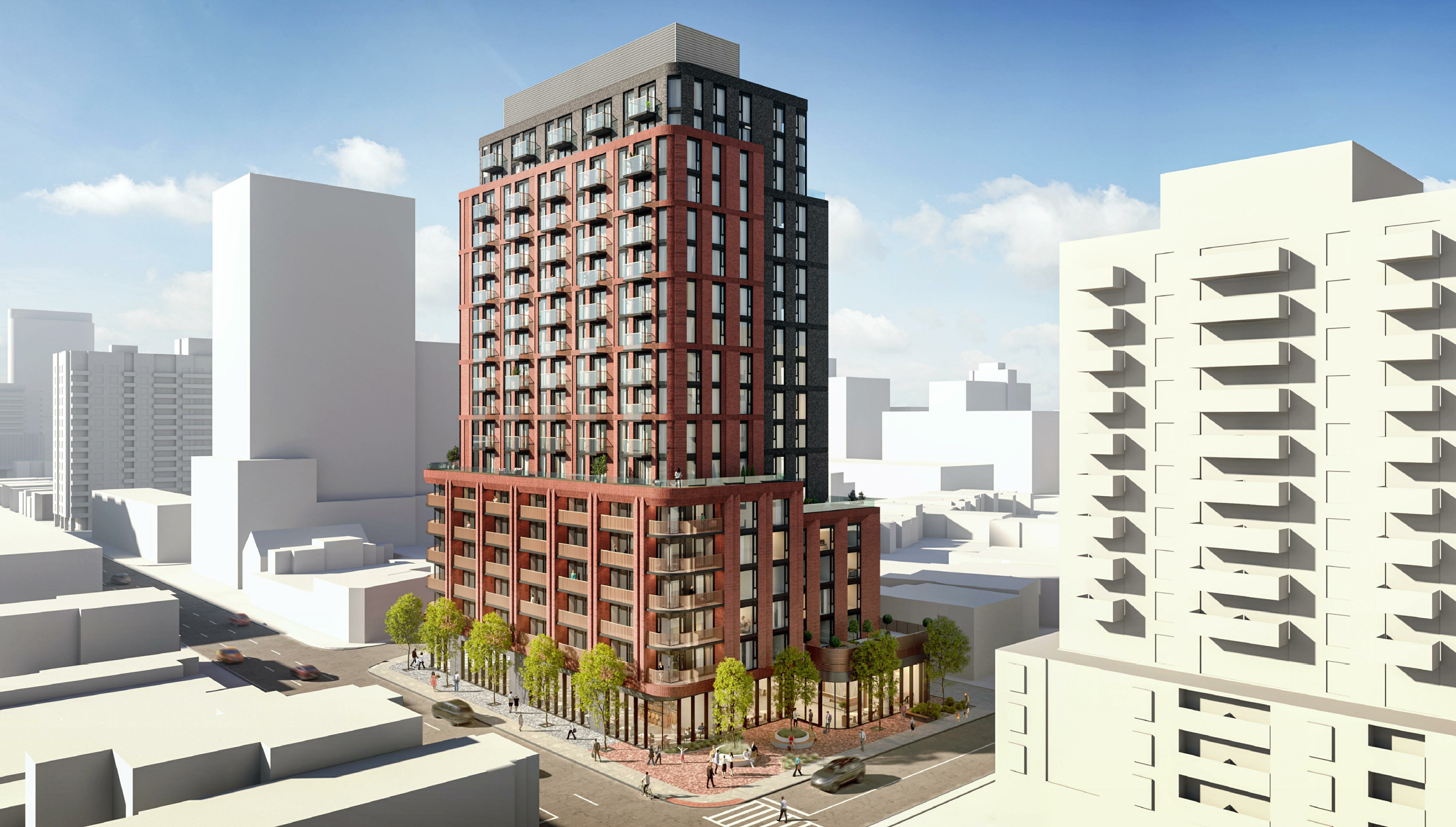 The site at 1423 through 1437 Bloor Street West is bounded by Sterling Road on the east, Perth Avenue on the west, and a laneway to the south. It is currently occupied by eight 2 and 2 ½ -storey house forms with a mix of residential and commercial uses, including a total of 19 dwelling units, 15 of which are rentals, along with several accessory structures. 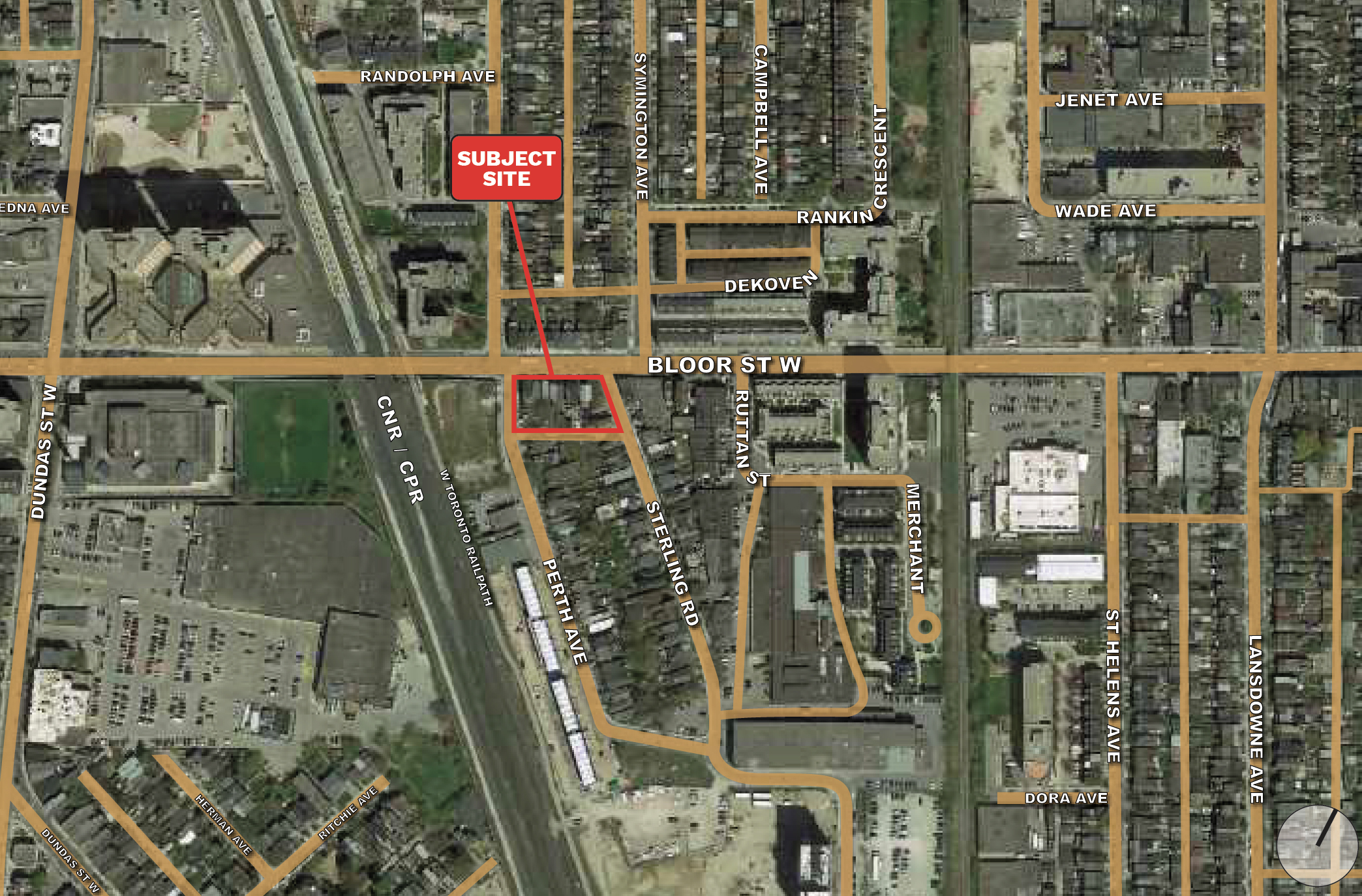 The site is in an area with significant focus on multi-modal transportation: the entrance to the Bloor GO/UP Express Station is 110 metres to the west, and the planned Bloor-Lansdowne GO Station is 260 metres to the east. Just steps away is the West Toronto Railpath providing pedestrian and bicycle connections across the city. In recent years, the City and local developers have pursued intensification on under-utilized properties along Bloor Street West, the most recent approval being a mixed-use redevelopment of the Bloor Collegiate site at Dufferin, with residential towers ranging from 19 to 37 storeys in height. 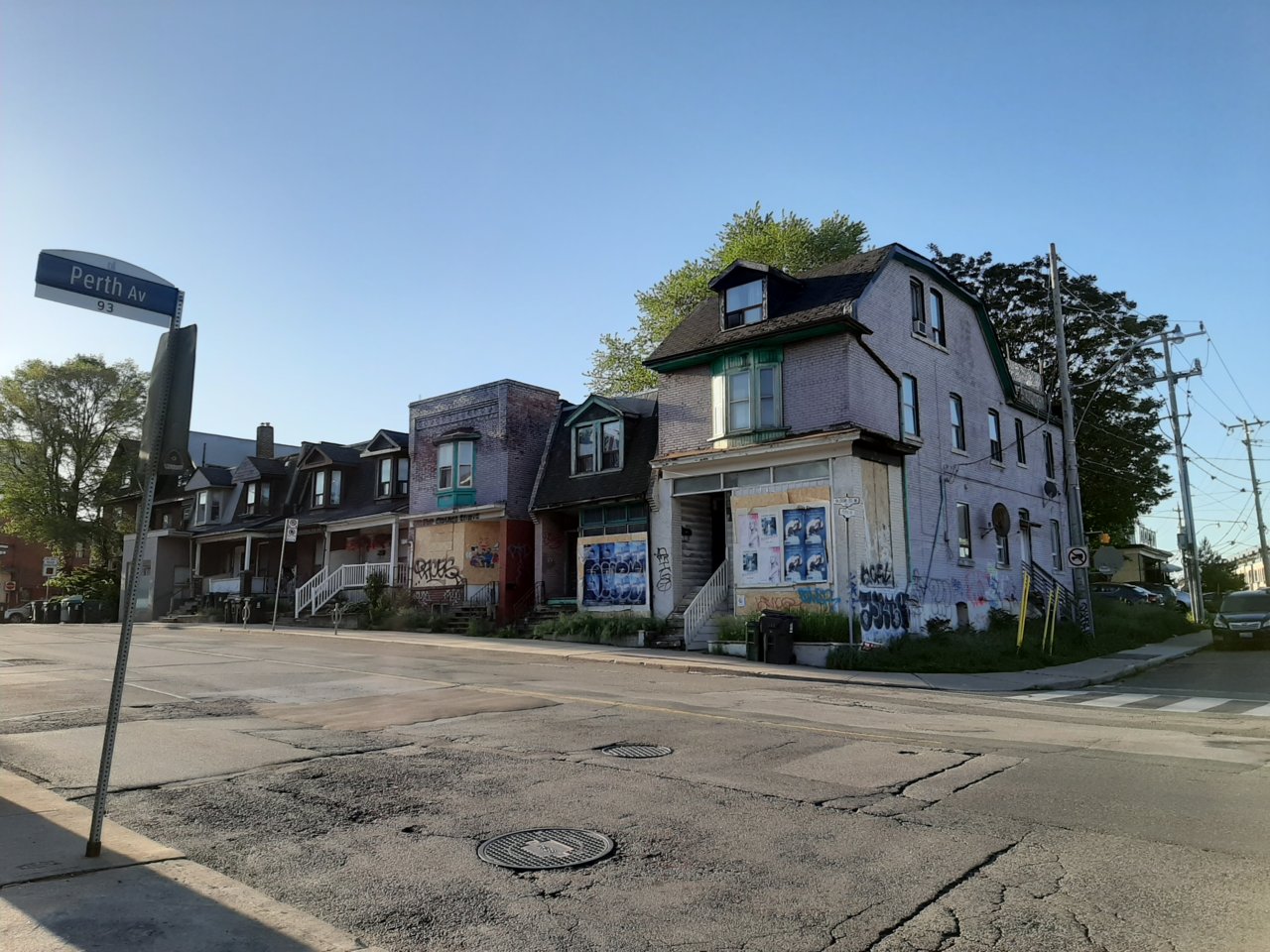 Architects BDP Quadrangle have designed an 18-storey tower inclusive of a 6-storey podium along the Bloor Street West frontage. The development includes a gross floor area of 14,861 m² for a proposed density of 7.11 times (FSI) the area of the lot. 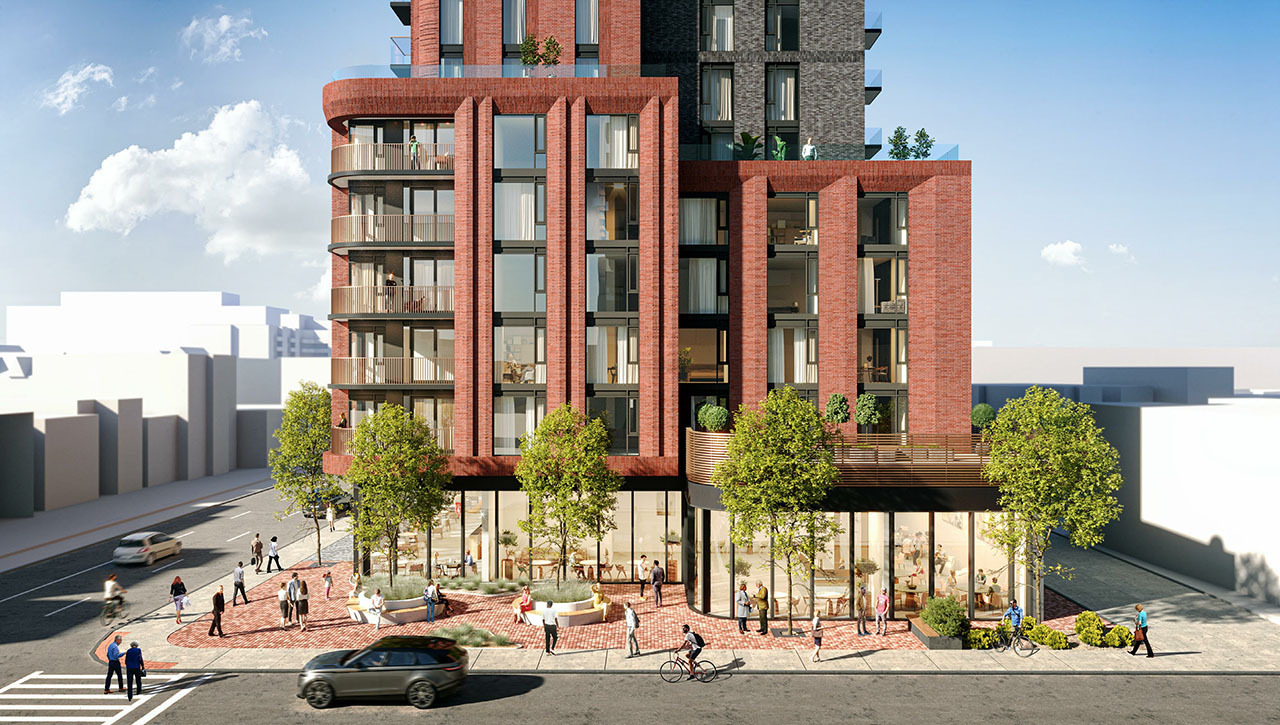 The ground floor—animated by retail and community uses—has setbacks designed to ensure 6-metre sidewalk widths along all three street frontages for an expanded pedestrian realm. The Bloor Street-facing retail units—intentionally shallow in order to attract smaller ‘mom and pop’ tenants—terminate in a 137 m² POPS (Privately-Owned Publicly Accessible Space) anchoring the northwest corner of Bloor and Perth Avenue. Also facing the POPS is the protruding, single-storey community space that reads as its own building element. On the opposite corner is the residential lobby, reflecting the residential character of Sterling Road. 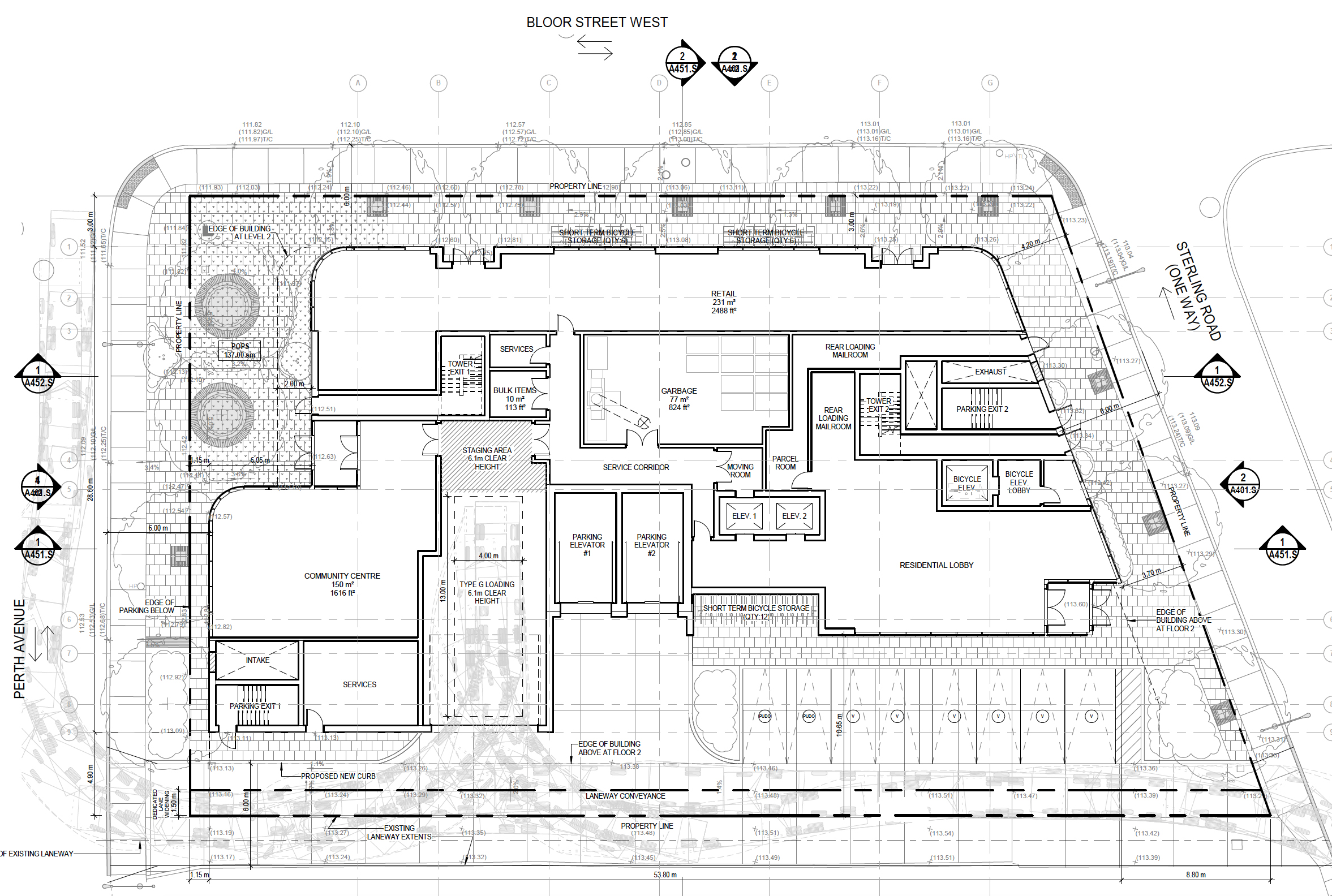 The façade curves around both the northwest and northeast corners of the building, softening the transitions to Sterling Road and Perth Avenue. The podium steps down to 5 storeys then 1 storey towards the rear of the site, as a gradual transition to the neighbourhoods to the south. The tower tapers from its maximum floor-plate of 825 m² at floors 7 through 15, to 645 m² for floors 17 and 18. 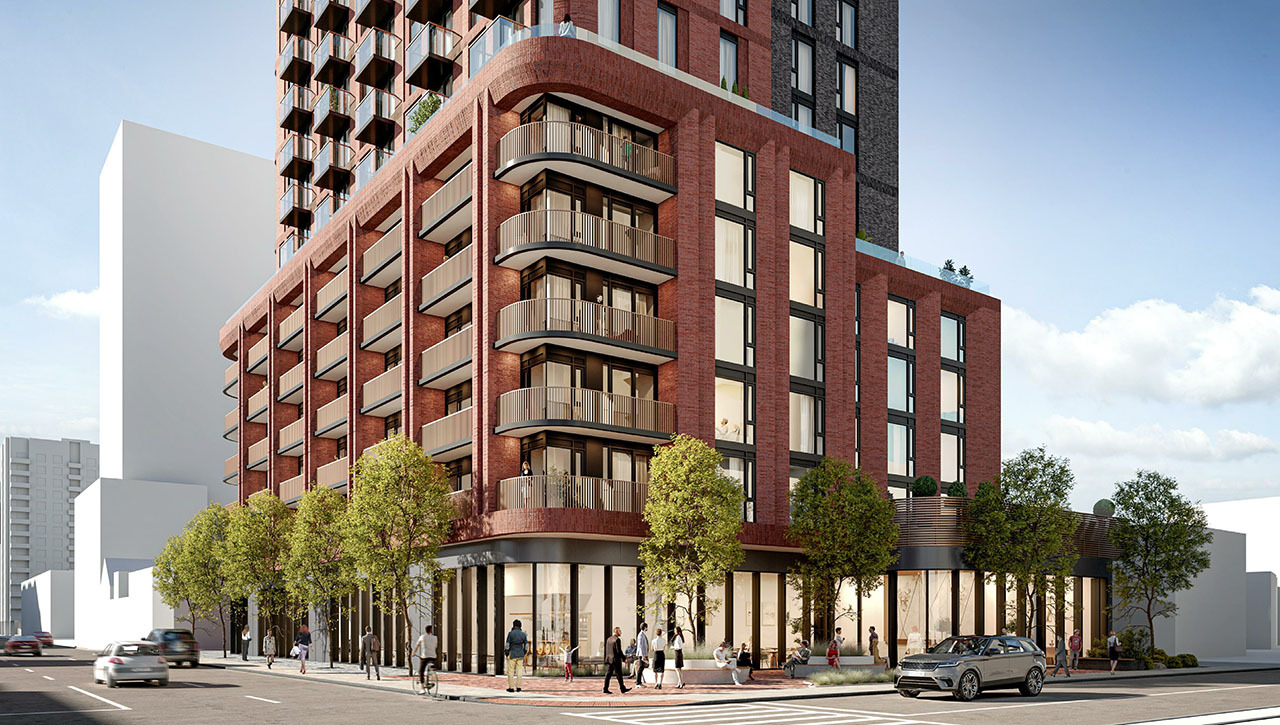 An equal amount of interior and exterior amenity space is provided to residents. A second-floor terrace, contiguous with the indoor amenity, wraps the southern and western portions of the building. An additional south-facing outdoor amenity is located on the 18th level rooftop.

The widened laneway at the rear of the site provides access to a two-level underground garage as well as the loading and staging areas, all of which will be screened from public view. Parking space for a total of 65 vehicles and 208 bicycles spaces is provided.