Mattamy Adapts Plans for Tower at Yonge and St Mary

Developer Mattamy recently filed a Site Plan Approval application with the City of Toronto for a 50-storey mixed-use condominium building on the the east side of St Nicolas Street between Charles and St Mary streets, a couple blocks southwest of the intersection of Yonge and Bloor. Buildings planned to be partially demolished as part of the proposal include 79, 81, and 85 St Nicholas Street, plus 710 through 718 Yonge Street, but a recently heritage-designated mid-century, 8-storey office building at 10 St Mary would be conserved. 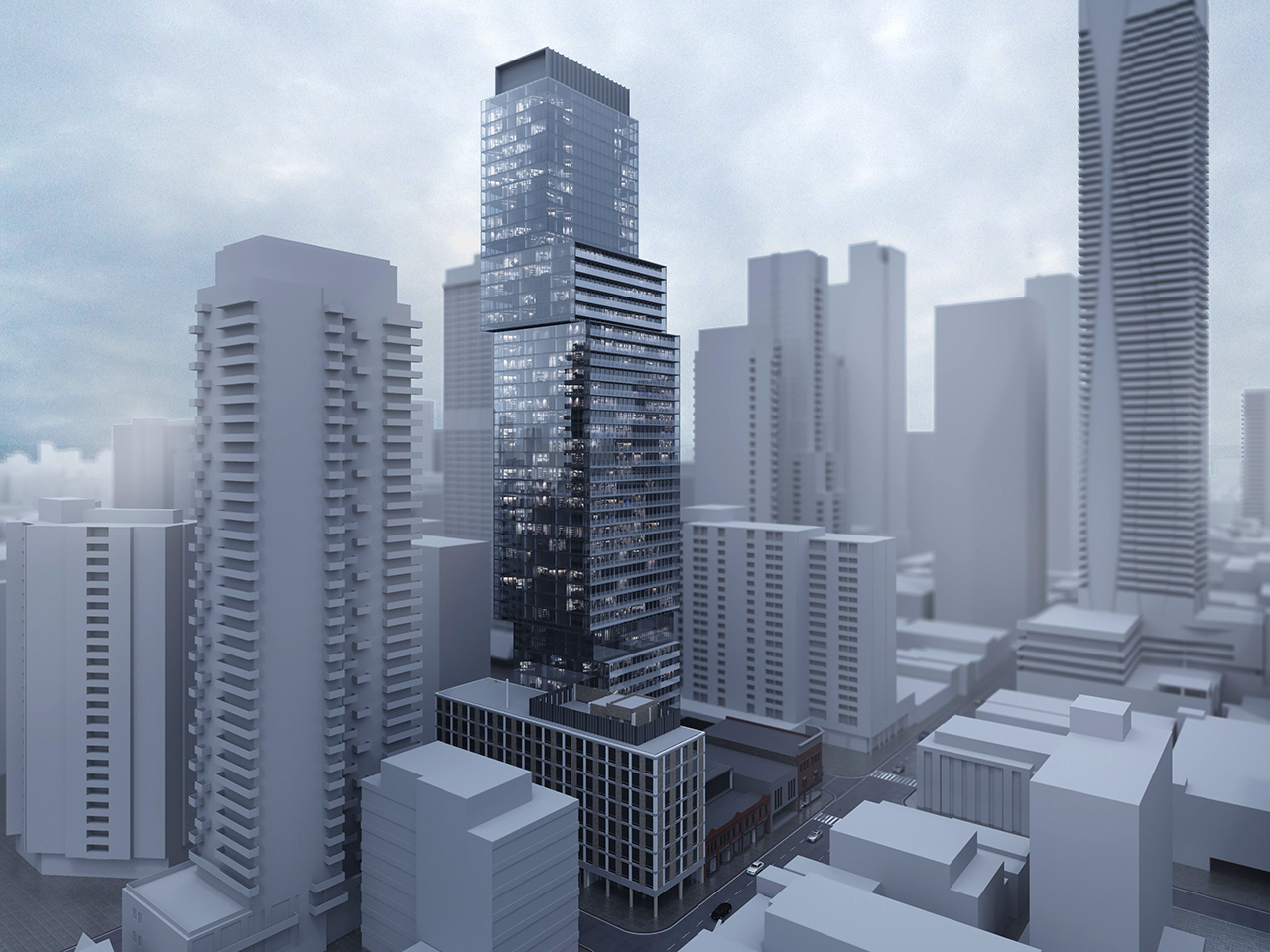 A previous owner of the site, Lifetime Developments, submitted an initial rezoning application to the City which provided for the demolition of the existing office building, and then appealed to the OMB in 2015 for lack of decision by the City within the required timeframe. The site was subsequently sold to Castlepoint Numa who negotiated a settlement with the City. In 2019, the settlement which closely reflects what was applied for while conserving 10 St Mary, was released by the LPAT.

The current owners, Mattamy, subsequently acquired 10 St Mary Street, along with 79-85 St Nicholas Street and 718 Yonge Street, and assumed the application and appeal. (Some properties are designated under Part IV of the Ontario Heritage Act; all are included as “contributing properties” in the proposed Historic Yonge Street Heritage Conservation District, currently under appeal.) 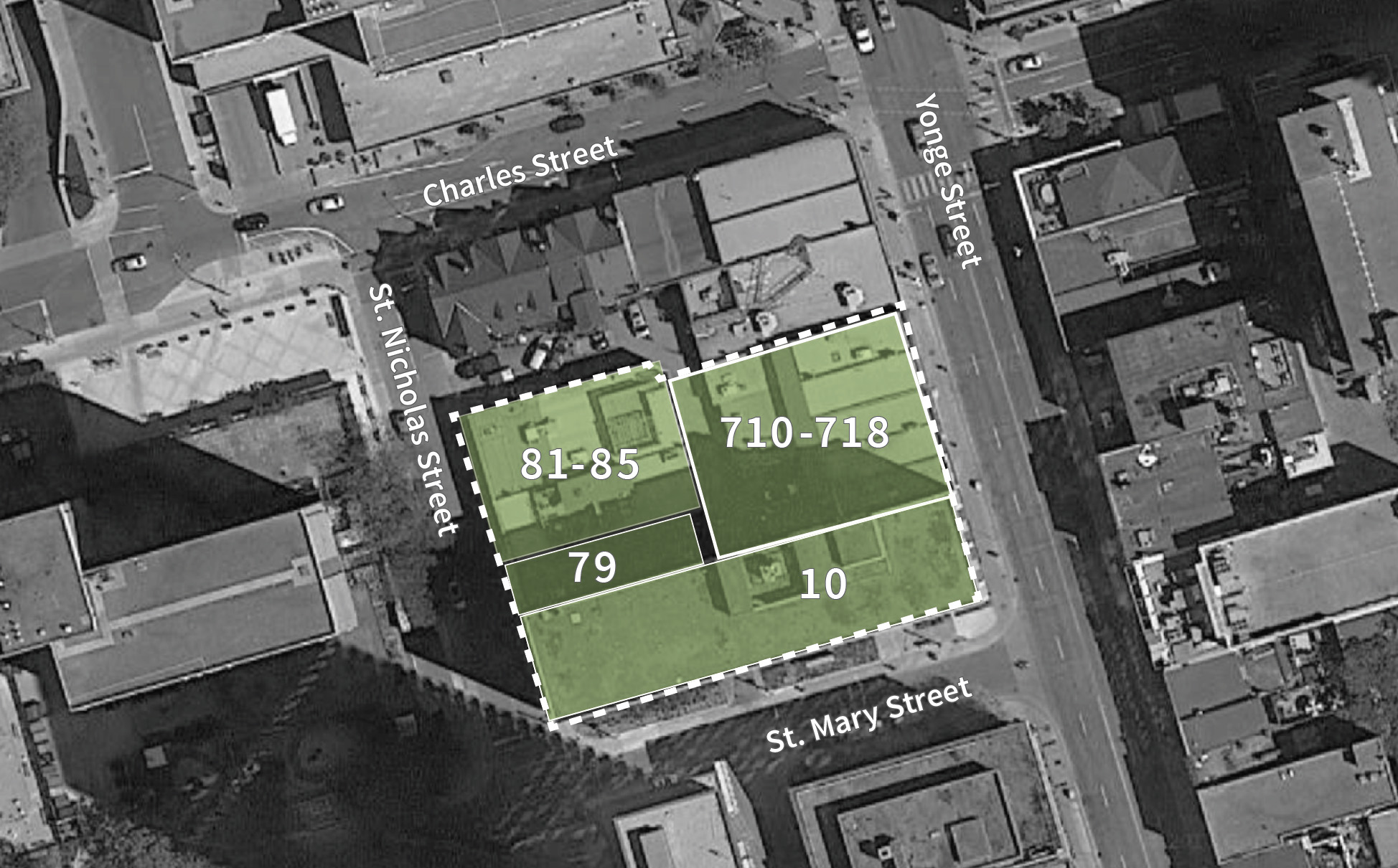 Designed by architects—Alliance, the revised proposal includes a 50-storey (previously 51-storey) residential tower on the northern portion of the site. It also calls for enhanced streetscape along St Mary Street and the conservation and retention in-situ of the office building on 10 St Mary Street, with retail uses along Yonge and St Nicolas streets behind the retained heritage facades. 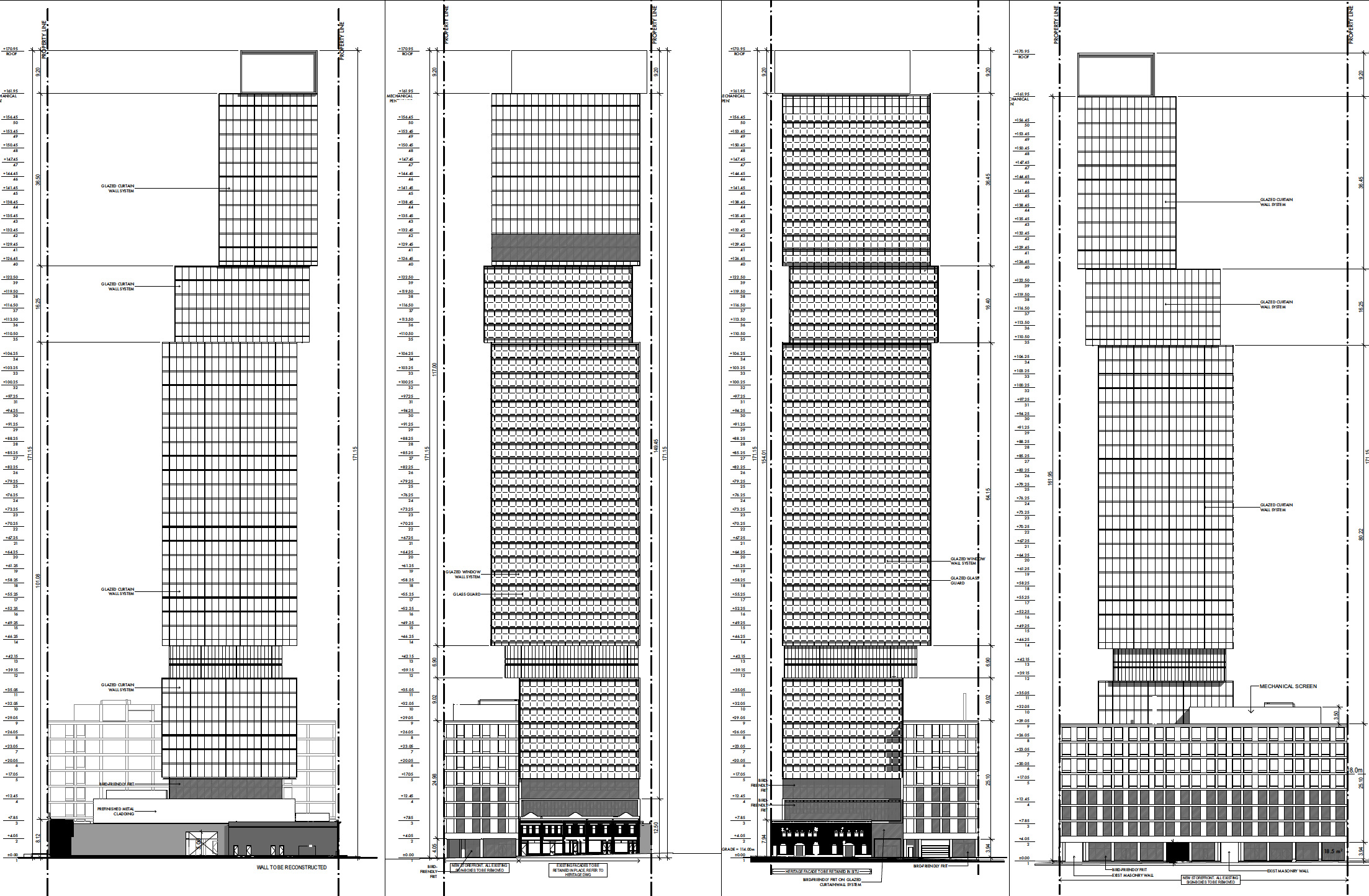 Retail space occupies much of the tower’s ground and 3rd levels.

The proposal would bring 465 units, in a mix of 25 studios (5%); 256 one-bedrooms (55%); 134 two-bedrooms (29%), 50 three-bedrooms (11%). In response to the increased unit count, residential amenity areas have been reconfigured and expanded, with spaces on floors 2-4 including east and west facing exterior terraces. 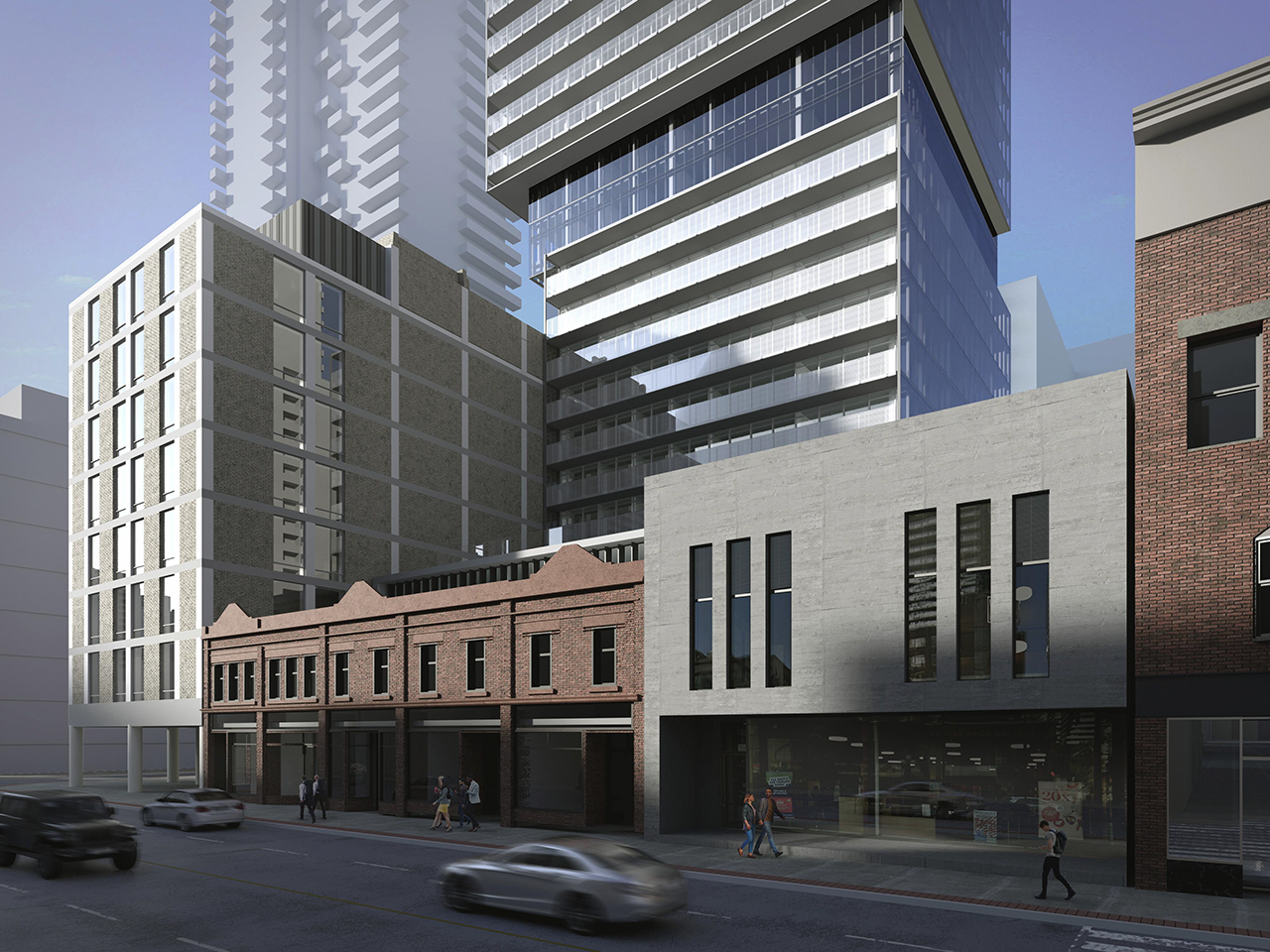 The proposed development is set back from Yonge, St Nicholas and St Mary streets with the tower’s massing articulated as shifting boxes, gradually moving further away from Yonge Street as the building rises. As per Heritage Architect ERA, the overall approach for the site is rehabilitation with select areas of restoration. These treatments would conserve the cultural heritage value, attributes, and character of the site. The retained portions of the existing buildings at 81-85 St Nicholas Street and 710-718 Yonge Street would be incorporated into the proposed development. In particular, the office building at 10 St Mary Street would undergo various updates, including replacing windows and lobby glazing (observing original pattern), repairing and reinstating the mosaic tile in the lobby and on exterior columns, and altering the ground floor for expanded retail space. 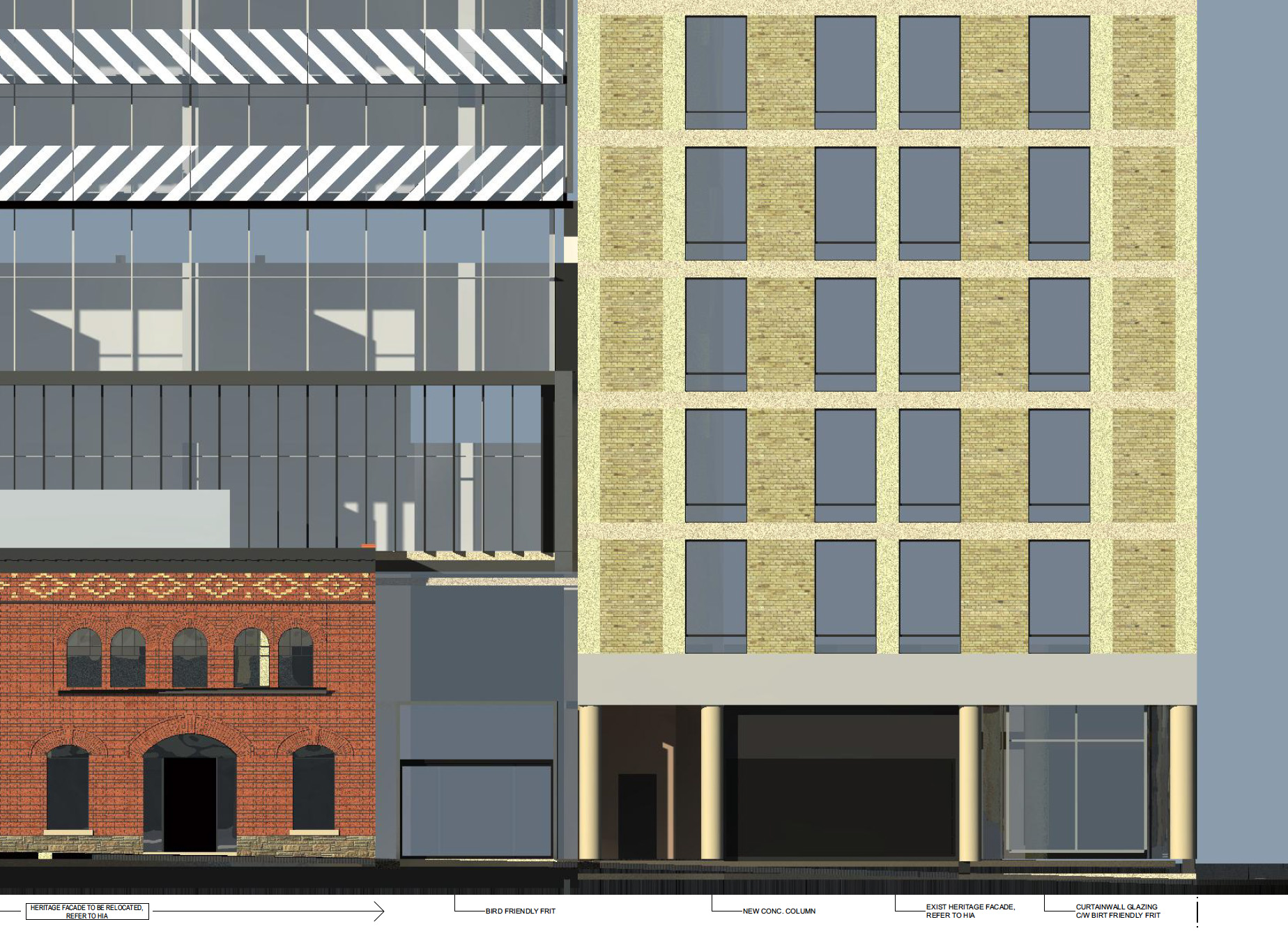