After releasing information last week about the three westernmost stations on the future Ontario Line, provincial transit agency Metrolinx has now unveiled plans for the next four stations on the line through Downtown Toronto: Osgoode; Queen; Moss Park; and Corktown. 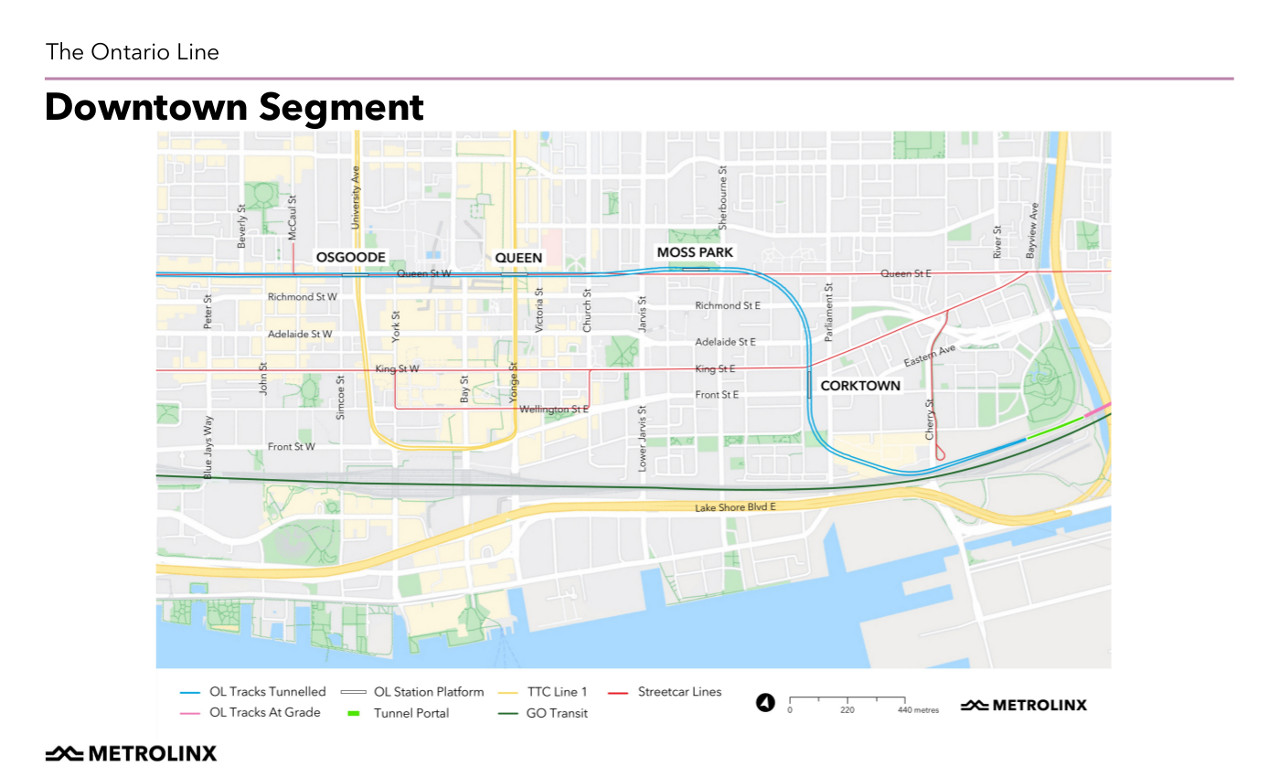 Map of the downtown segment of the Ontario Line. Image, Metrolinx

The Ontario Line will stretch from Exhibition Place and the intersection of Eglinton Avenue East and Don Mills Road. It is one of four projects that the Government of Ontario announced in April, 2019 that it is building in Toronto. 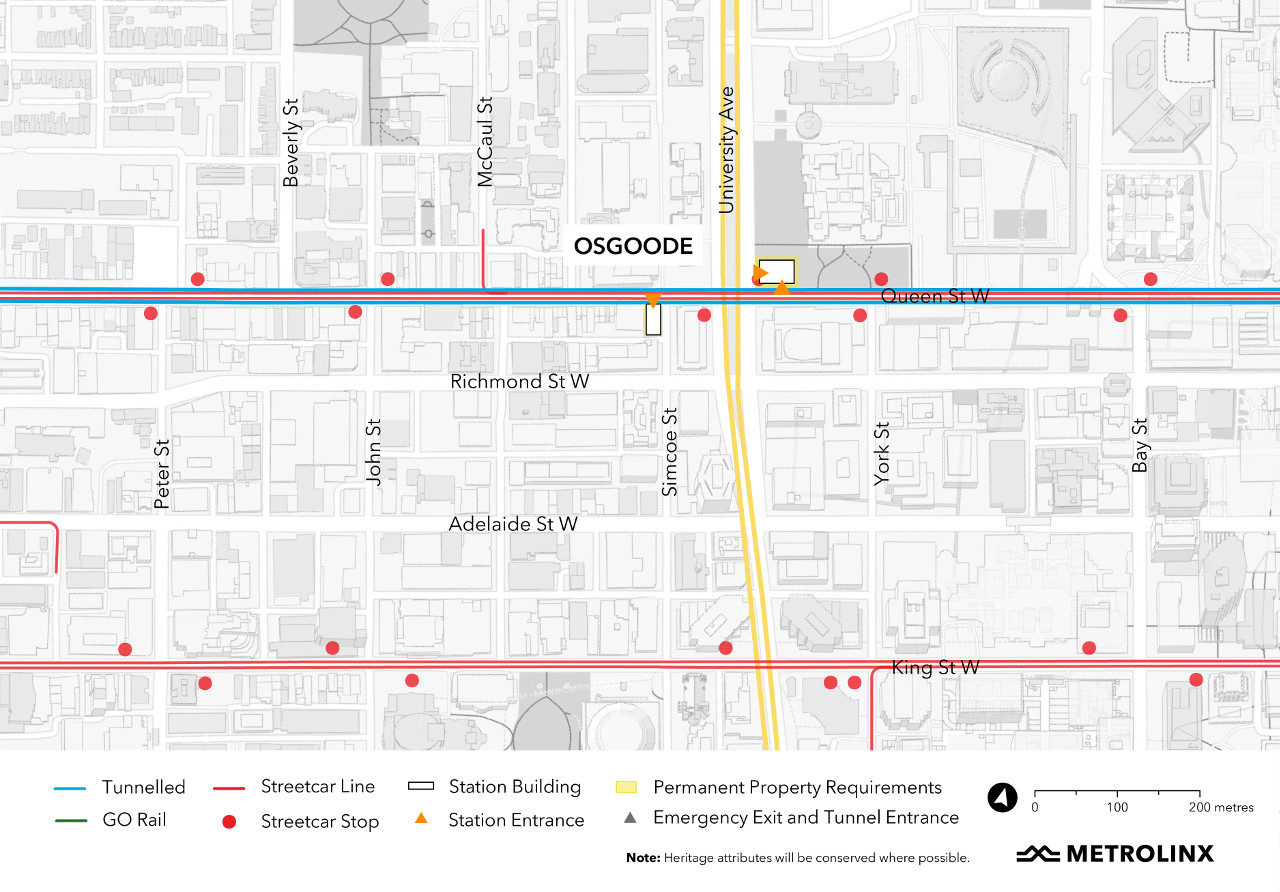 Osgoode, at the intersection of Queen Street West and University Avenue, is a transfer point, where passengers can connect with the TTC’s Line 1 Yonge-University subway. Metrolinx will build the new station under the current Line 1 Osgoode Station. It estimates that about 12,000 people will go through the station each day during the busiest travel hour. Growth patterns suggest that, by 2041, as many as 16,500 residents and 110,500 jobs will be within a 10-minute walk of the station. 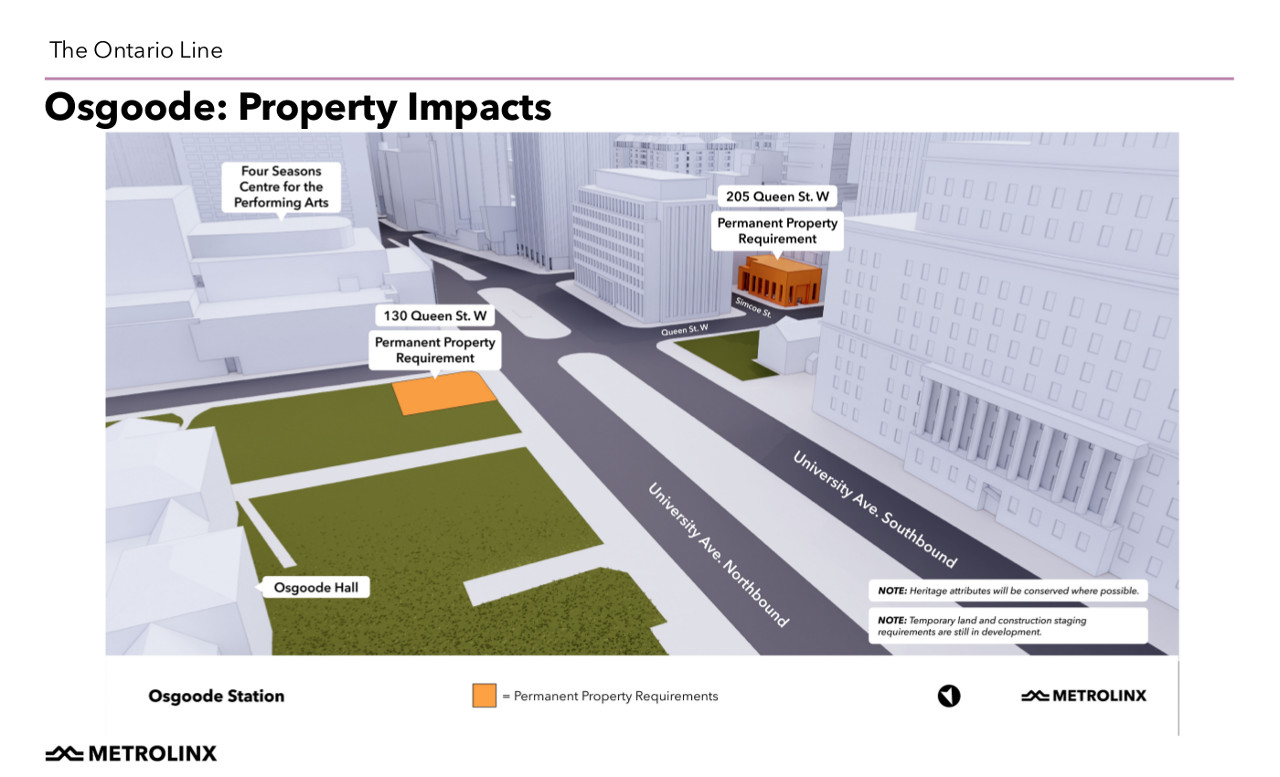 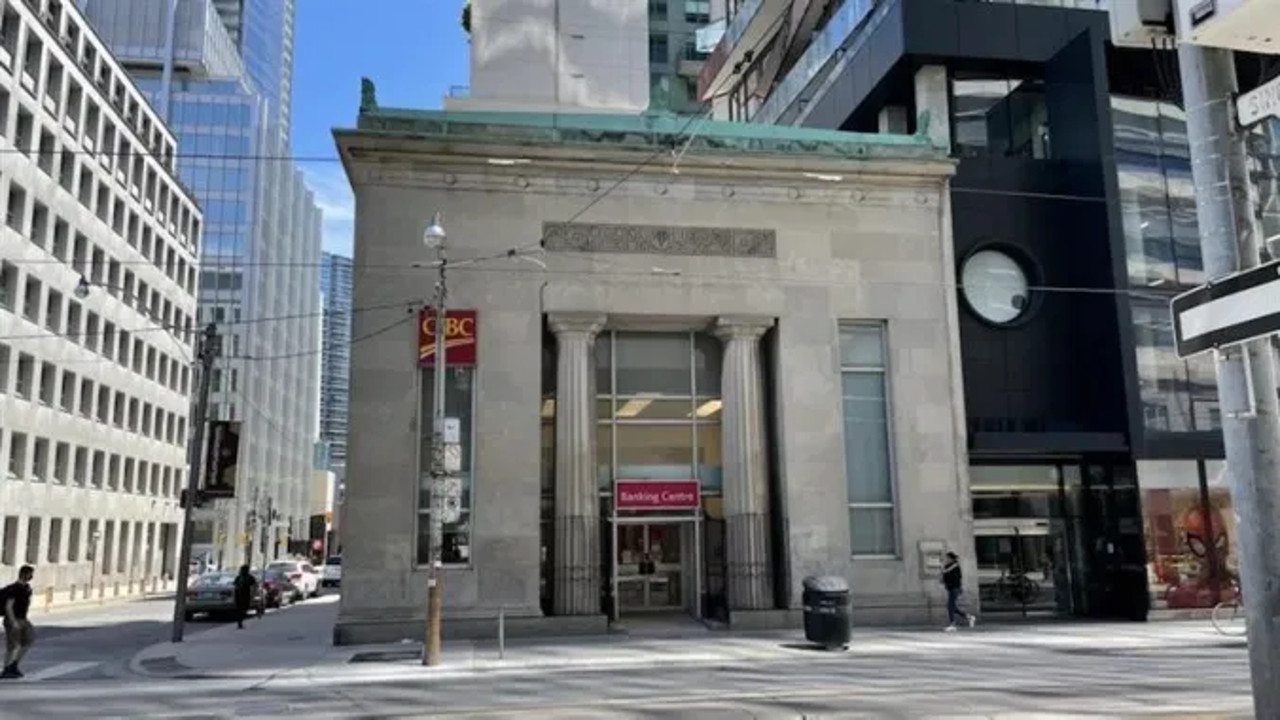 Metrolinx will work with heritage experts to incorporate heritage attributes of the building at 205 Queen Street West into the new station development. Image, George Gretes.

At Simcoe (above), it plans to build the access through the CIBC bank branch at 215 Queen Street West. It intends to work with heritage experts to incorporate heritage attributes of the building into the new station development. It will carefully dismantle the structure and store its materials safely away until it’s ready to reassemble them as part of the station construction. 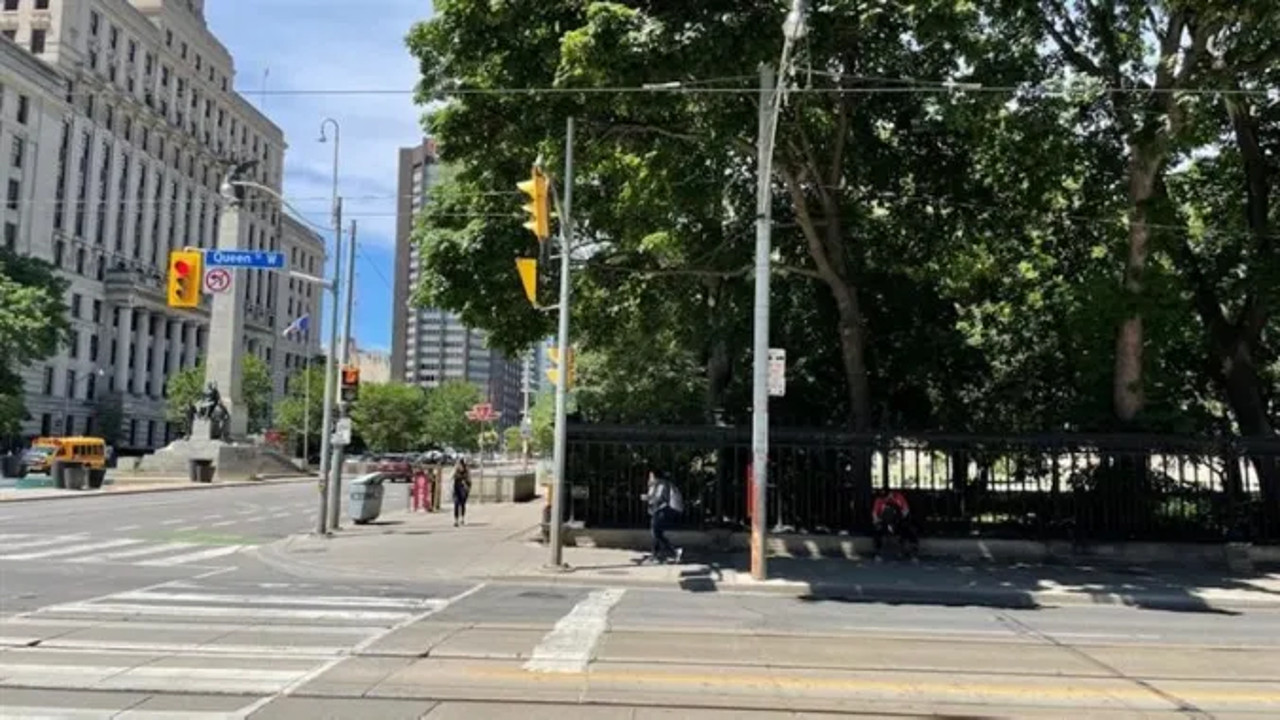 Metrolinx will work to minimizie impacts to the fence surrounding Osgoode Hall as it builds the new Ontario Line subway station under the TT’s Line 1 subway platform. Image, George Gretes.

On the northeast corner of Queen and University (above), Metrolinx will build a new structure on the property of the Osgoode Hall law courts. Again, it promises to minimize impact to the landscaping and historic fence surrounding the Osgoode property. Working under the direct supervision of a qualified expert with knowledge and experience in metal and stone masonry, contractors will dismantle a small portion of the fence before before construction and reinstate it later. They’ll place protective material around the rest of the fence, entrance gates and any landscape elements near the construction site.

The cast-iron fence dates from 1868 and constrains access to the site through ‘cow-gates’—structures that were meant to keep cattle from grazing on the grounds. 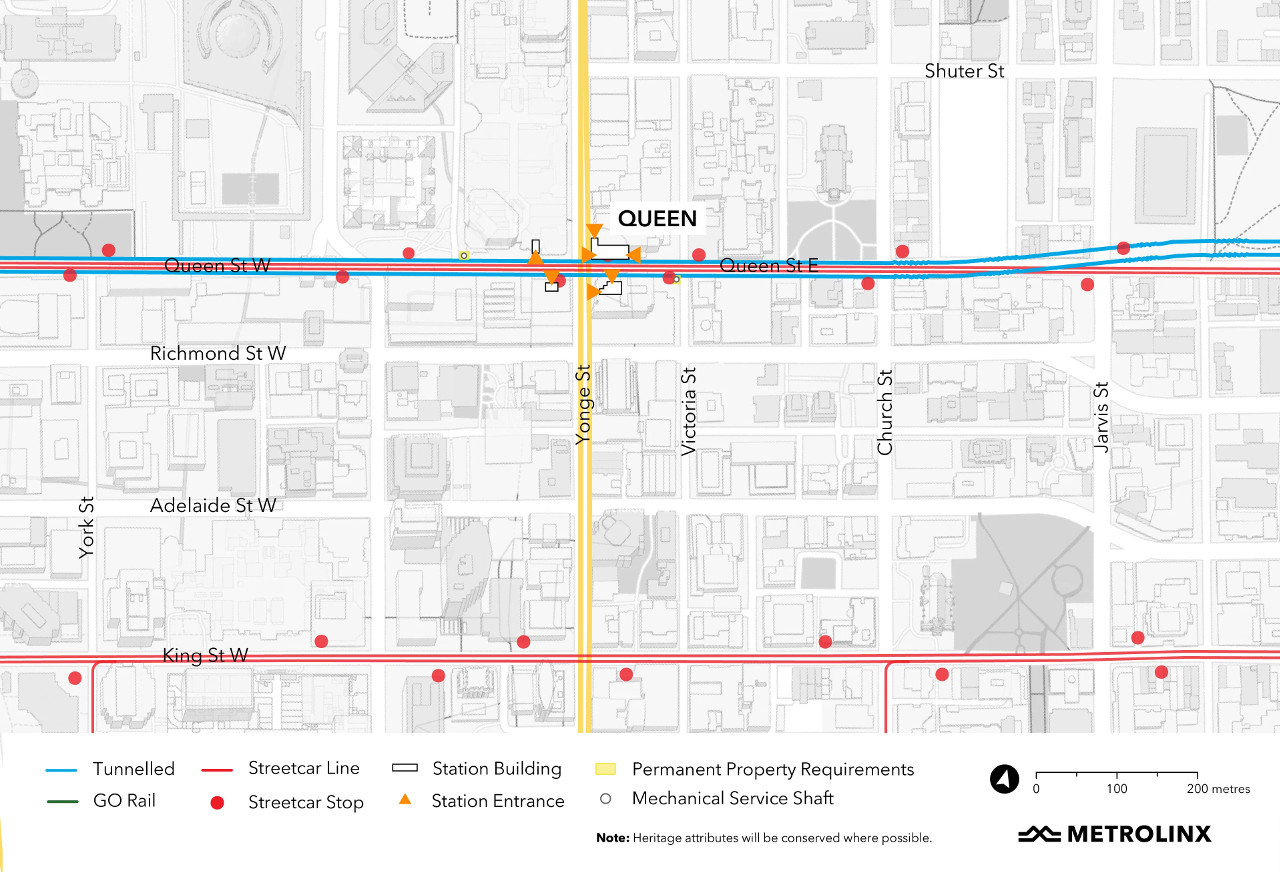 Map of the area around Queen Station. Image, Metrolinx. 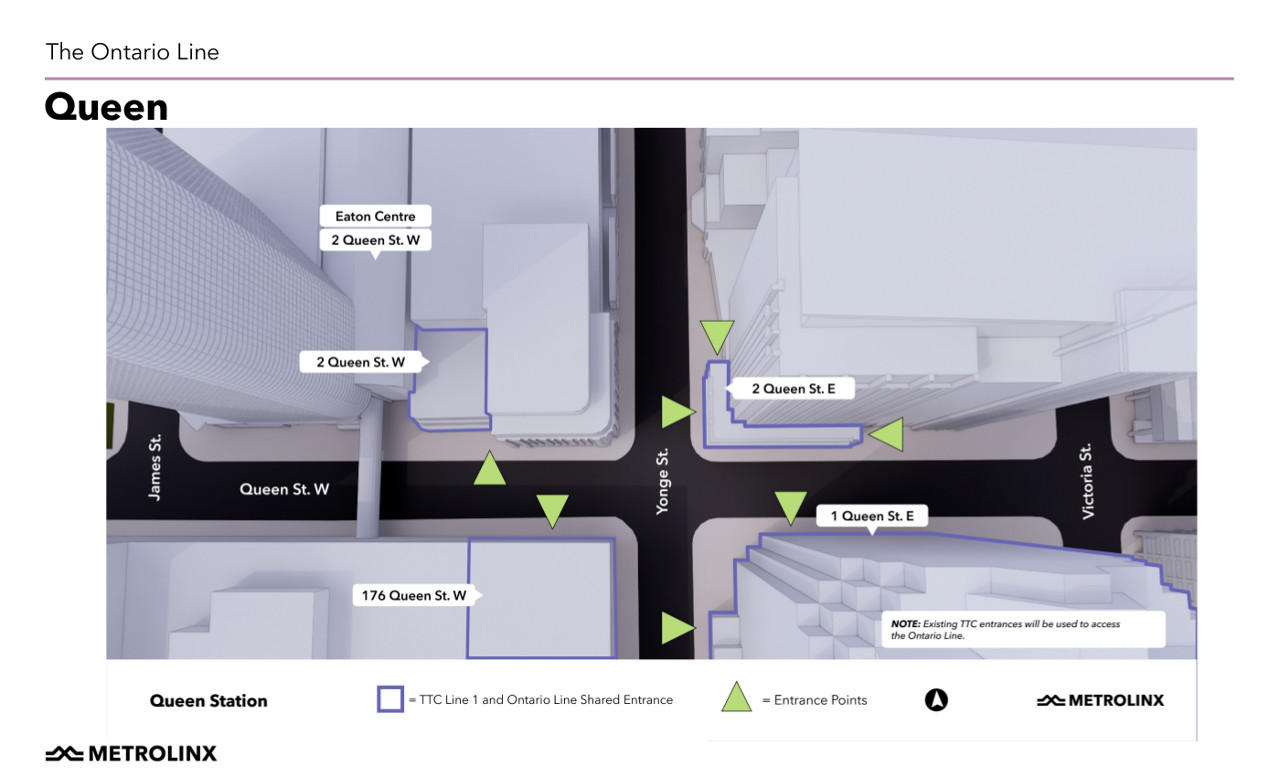 Passengers will access the Ontario Line Station at Queen through one of the seven current exits / entrances. Image, Metrolinx.

Metrolinx will upgrade all seven existing entrance/exits for the Line 1 station to allow passenger access to the Ontario Line station. 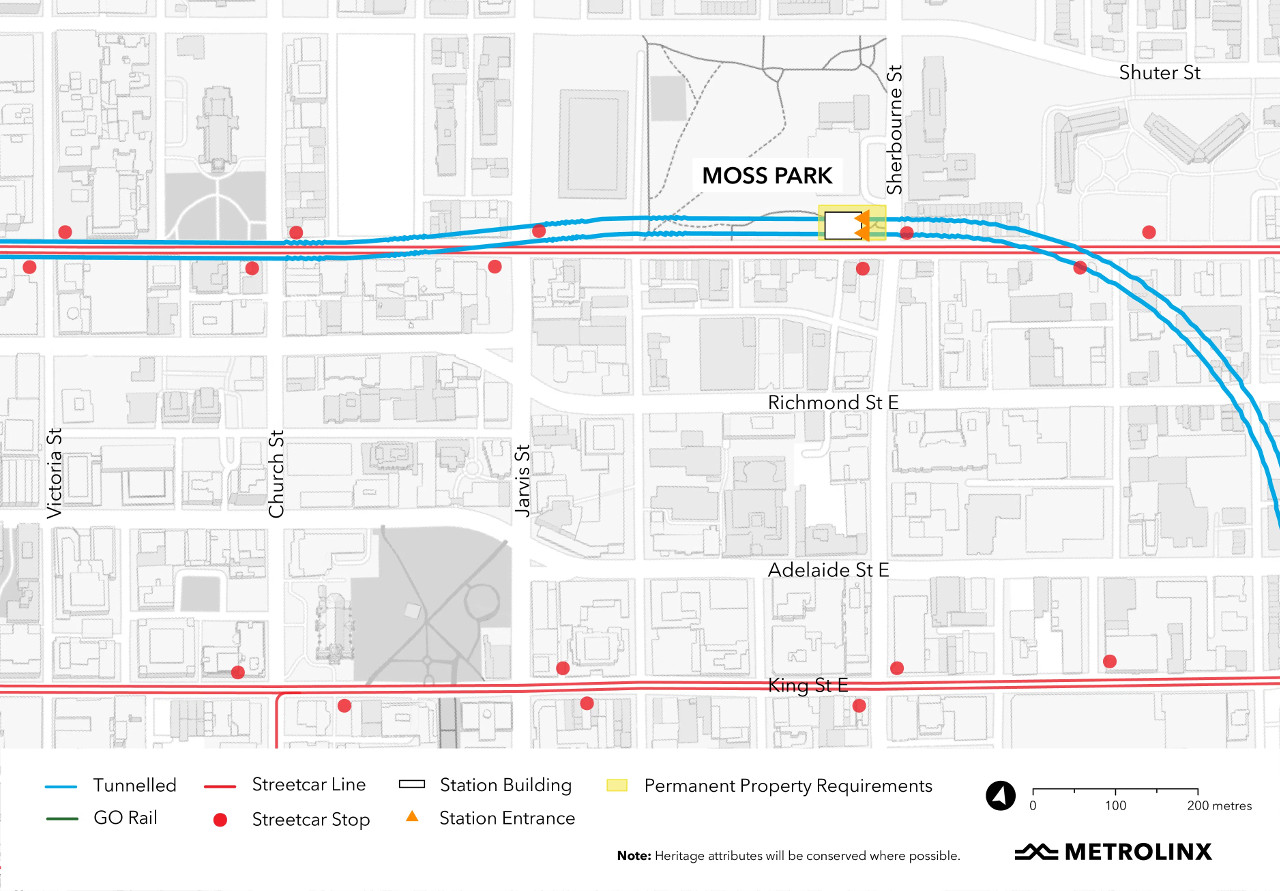 Map of the area around Moss Park Station. Image, Metrolinx.

The new station at Moss Park on Queen Street East, just west of Sherbourne, will serve the more than 23,600 people that planners think will be living within a 10-minute walk by 2041. The station structure will stand on the edge of the park, so that construction won’t conflict with streetcar service along Queen Street East. Since the City of Toronto intends to revitalize the parkland, Metrolinx will work with the City to make sure it beautifies and improves any space it needs after construction has ended, to fit in with the City’s plans. 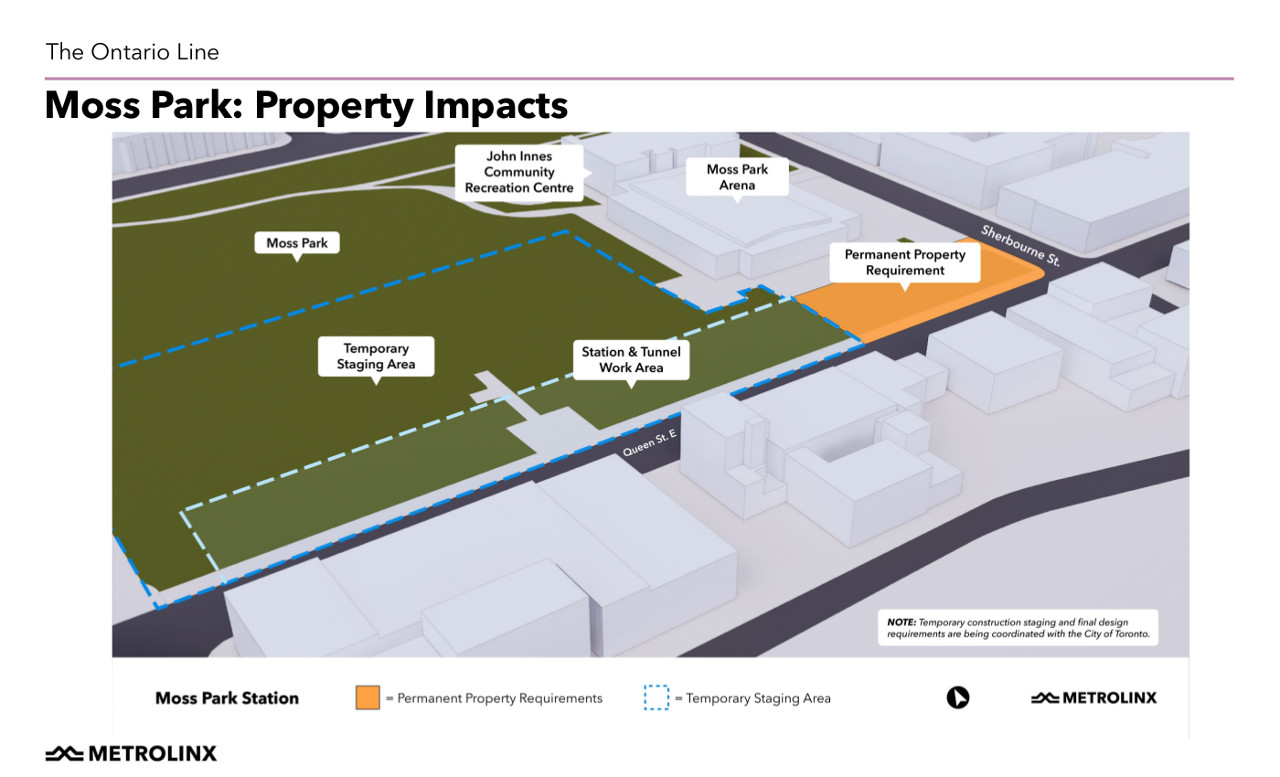 Metrolinx intends to establish the new Corktown Station south of King Street East on Berkeley Street, currently the site of a Staples store and other buildings. By choosing a site south of King East, Metrolinx can make sure the work zone for the site doesn’t block traffic and transit on King. 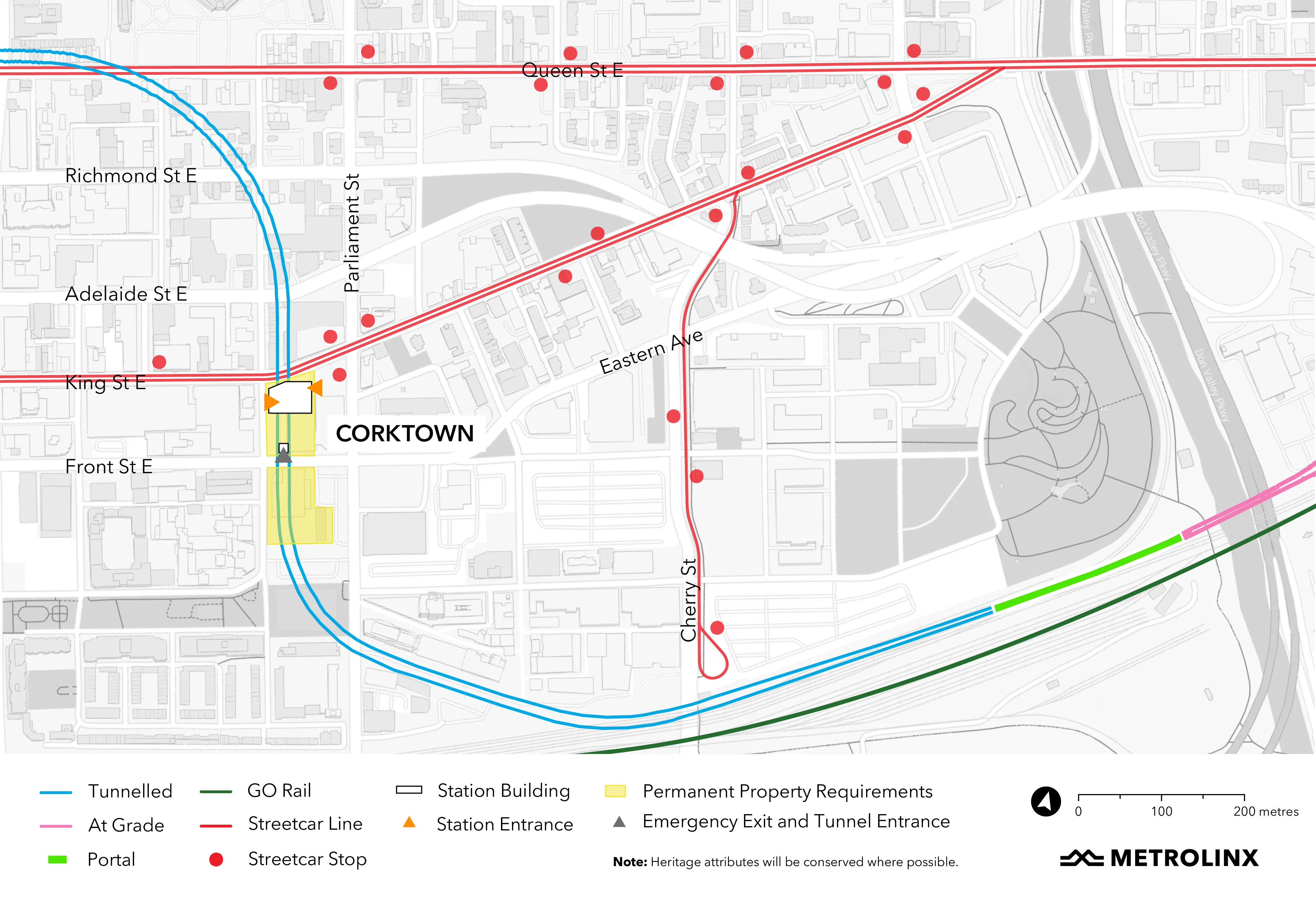 Map of the area around Corktown Station. Image, Metrolinx.

Two blocks of land form the site – between Berkeley and Parliament Streets on either side of Front Street East. North of Front East is the actual station site. Metrolinx will also use this site to launch tunnel-boring machines for some of the underground sections of the line. 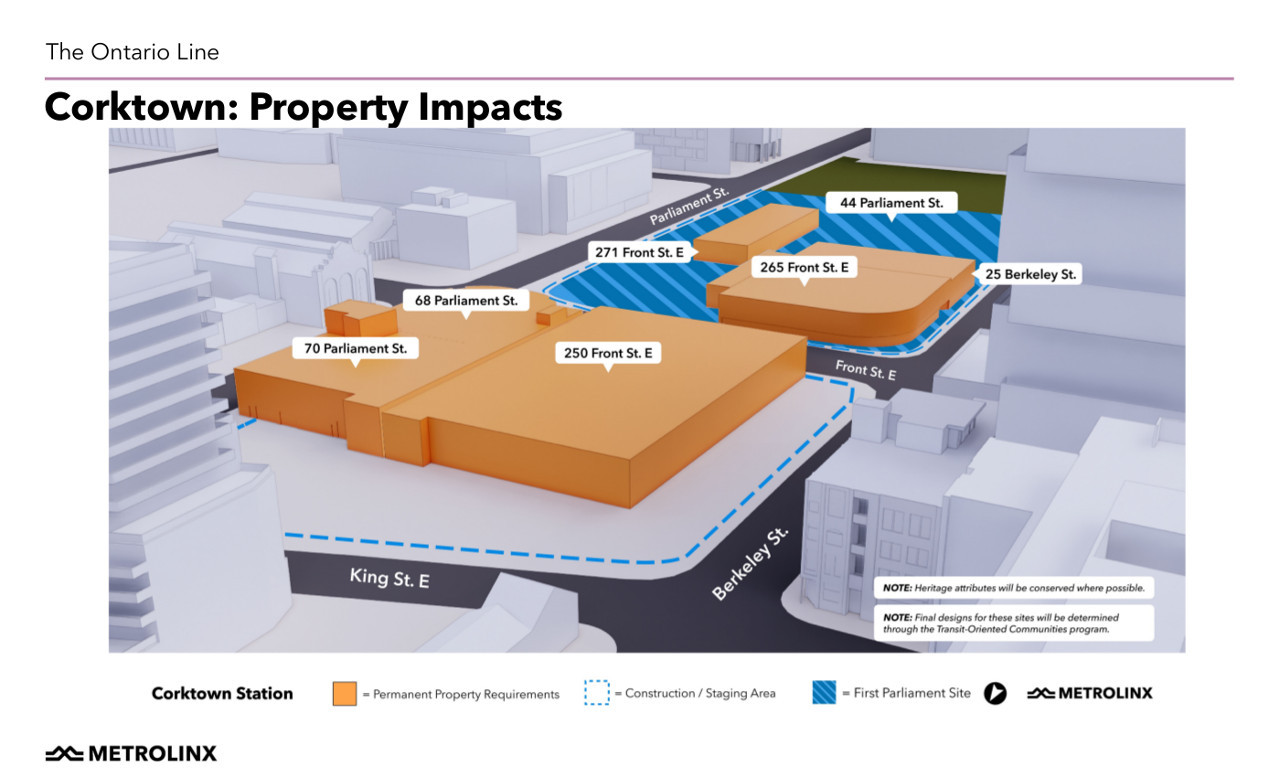 The south site is archaeologically significant—it was once home to the first parliament of Upper Canada. After extensive archaeological investigation and environmental clean-up on both sites, Metrolinx will use the first parliament site as a lay-down and staging area for tunnelling equipment, removing soil and other supporting uses to limit impacts to transit and traffic in the area. Construction and staging work will not happen until all archaeological assessments are complete. Metrolinx promises that “Archaeological assessments will be in accordance with Ministry standards and guidelines and in co-ordination with City of Toronto, Indigenous nations, and Ministry of Heritage, Sport, Tourism and Culture.”

Between 1795 and 1824, the first parliament buildings of Upper Canada were found at the intersection of modern-day Front and Parliament Streets in the former Town of York, now Toronto. Upper Canada’s Legislative Council and the House of Assembly used the first parliament buildings to govern Upper Canada, but also for government and public events, as temporary housing for immigrants and as a congregation space for the Anglican Church. In 1813, invading American soldiers burned down the buildings. 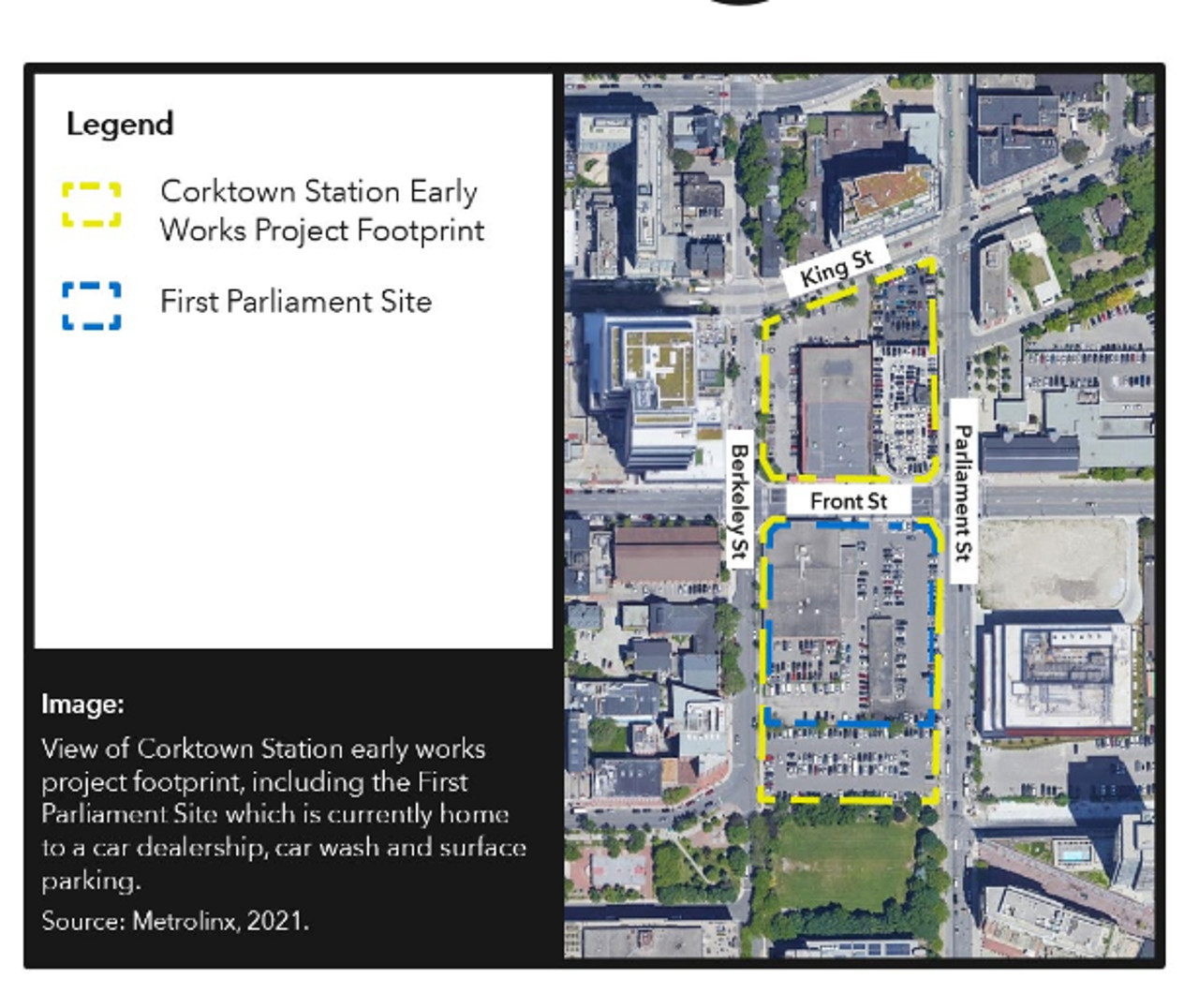 Metrolinx says, it “recognizes the extensive work the City and its partners have completed envisioning a new future for the first parliament site.” It promises to work with Indigenous communities, the Ontario Heritage Trust, City of Toronto, community groups, and the public to develop an interpretation and commemoration plan for the site.

The Corktown site may also be home to a future Transit-Oriented Community.

Metrolinx estimates that, in 2041, these four downtown stations together serve:

Want to get involved in the discussion? Check out UrbanToronto’s dedicated Forum thread, or leave a comment in the space on this page.