Mizrahi Development’s The One Prepares for Major Concrete Pour

There is a lot of hustle and bustle on the southwest corner of Yonge and Bloor, where Mizrahi Developments‘ The One has been under construction since 2017. Work is now heating up for the new landmark, which is currently preparing for a 1,000m³ concrete pour on its fifth level. 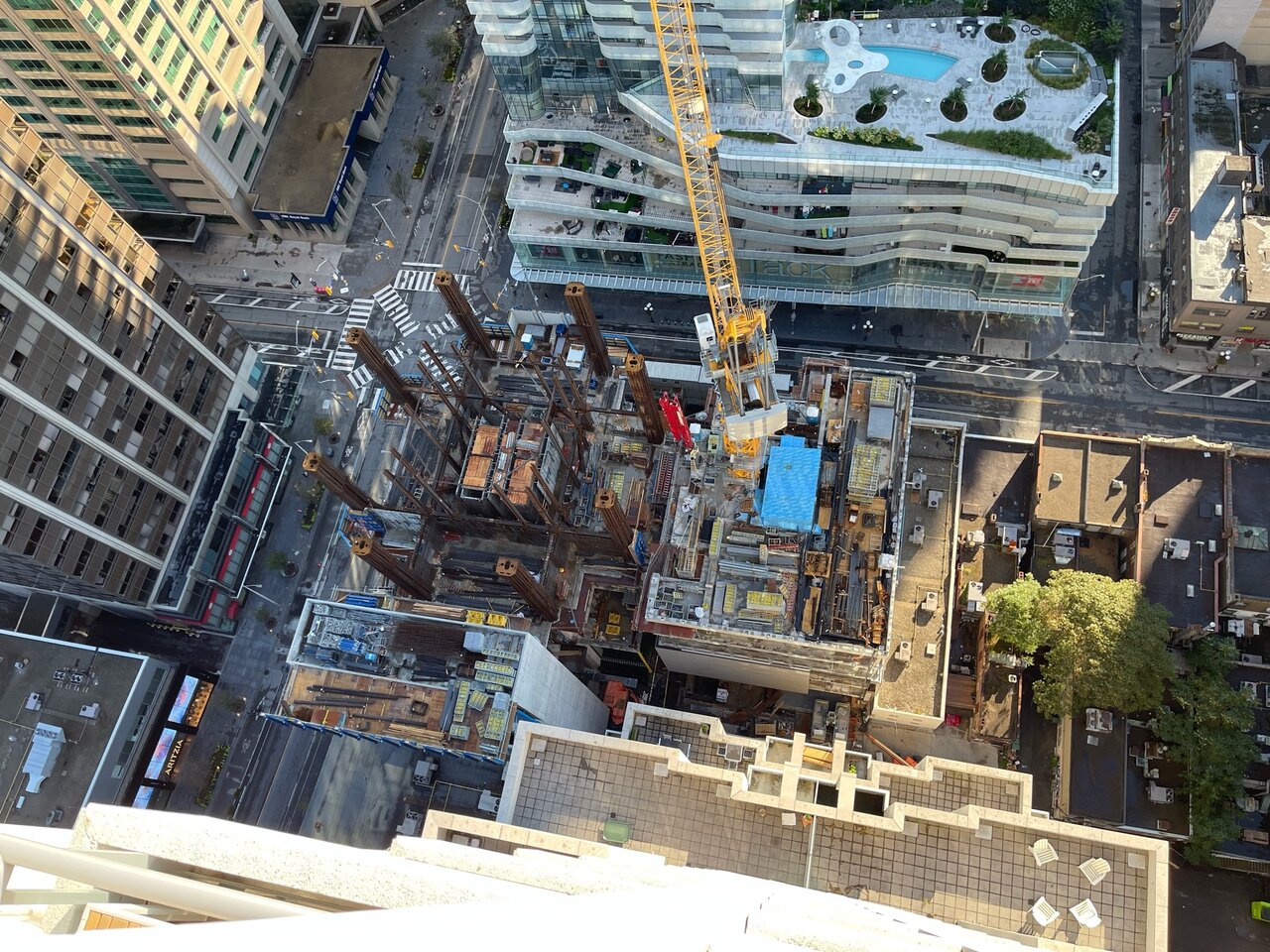 Overhead view of The One site, image by UT Forum contributor Benito

The building, designed by UK-based architects Foster + Partners with Toronto’s Core Architects, is in the process of building up temporary form walls filled with rebar ahead of the major pour. These forms will be used to create the interior walls of the building, bringing the equivalent of more than 100 truckloads of concrete to the site. 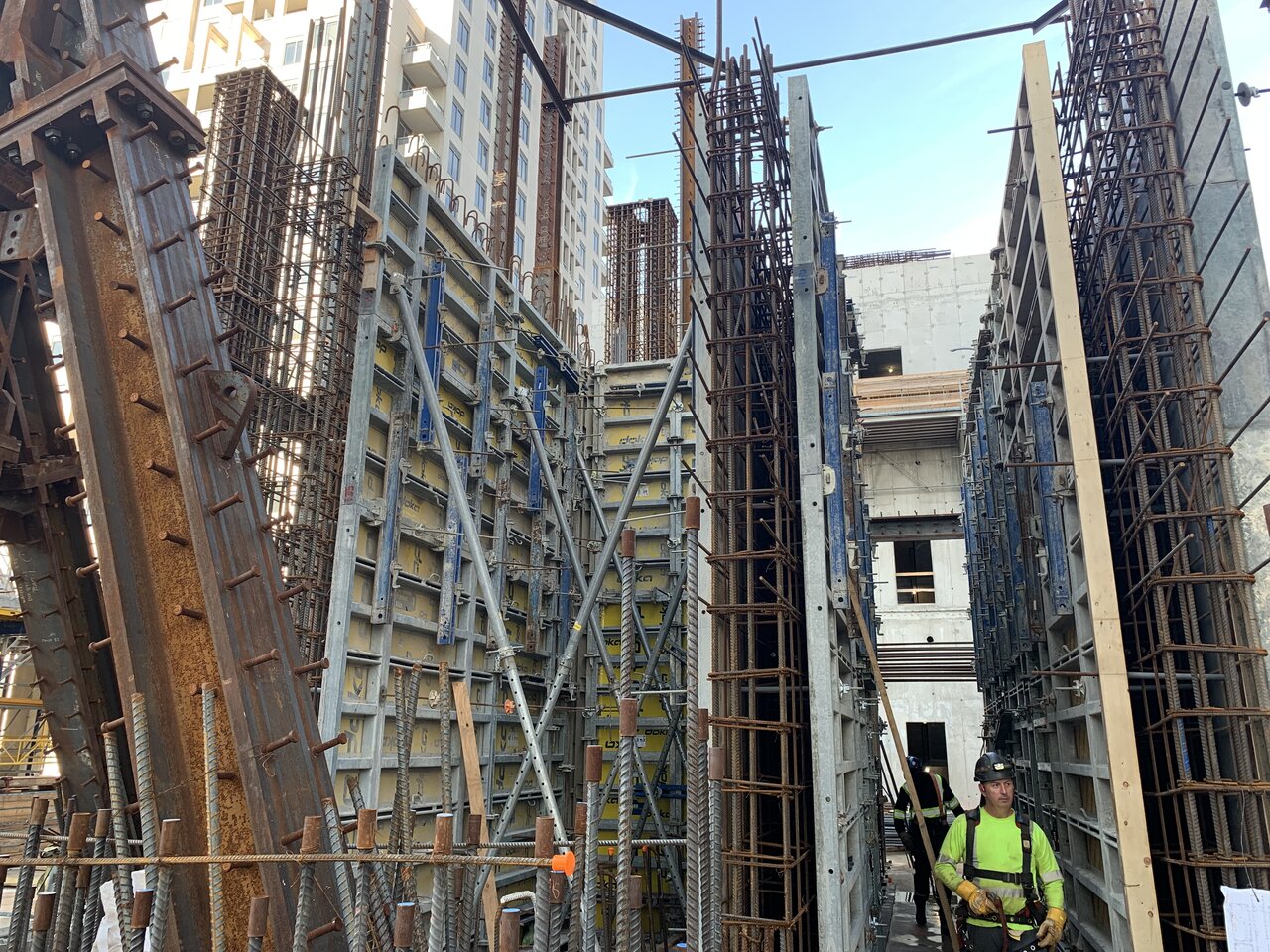 There are copious amounts of rebar on the site, which will be used for the construction of the future interior walls, in particular on this level, those of the base of the central elevator core: the elevators serving the tower will load on the sixth level and continue upwards, so the fifth level here will serve as the ‘pit’ below those shafts. To get to the tower elevators, people will take another set of elevators from ground level that are situated to the west of the tower, before transferring via a six floor lobby and amenities level to the core elevators. This arrangement leaves the centre of the concourse through fourth levels open for expansive commercial spaces, especially that of the extra-high ground floor which will likely become one of the signature retail spaces in the country. 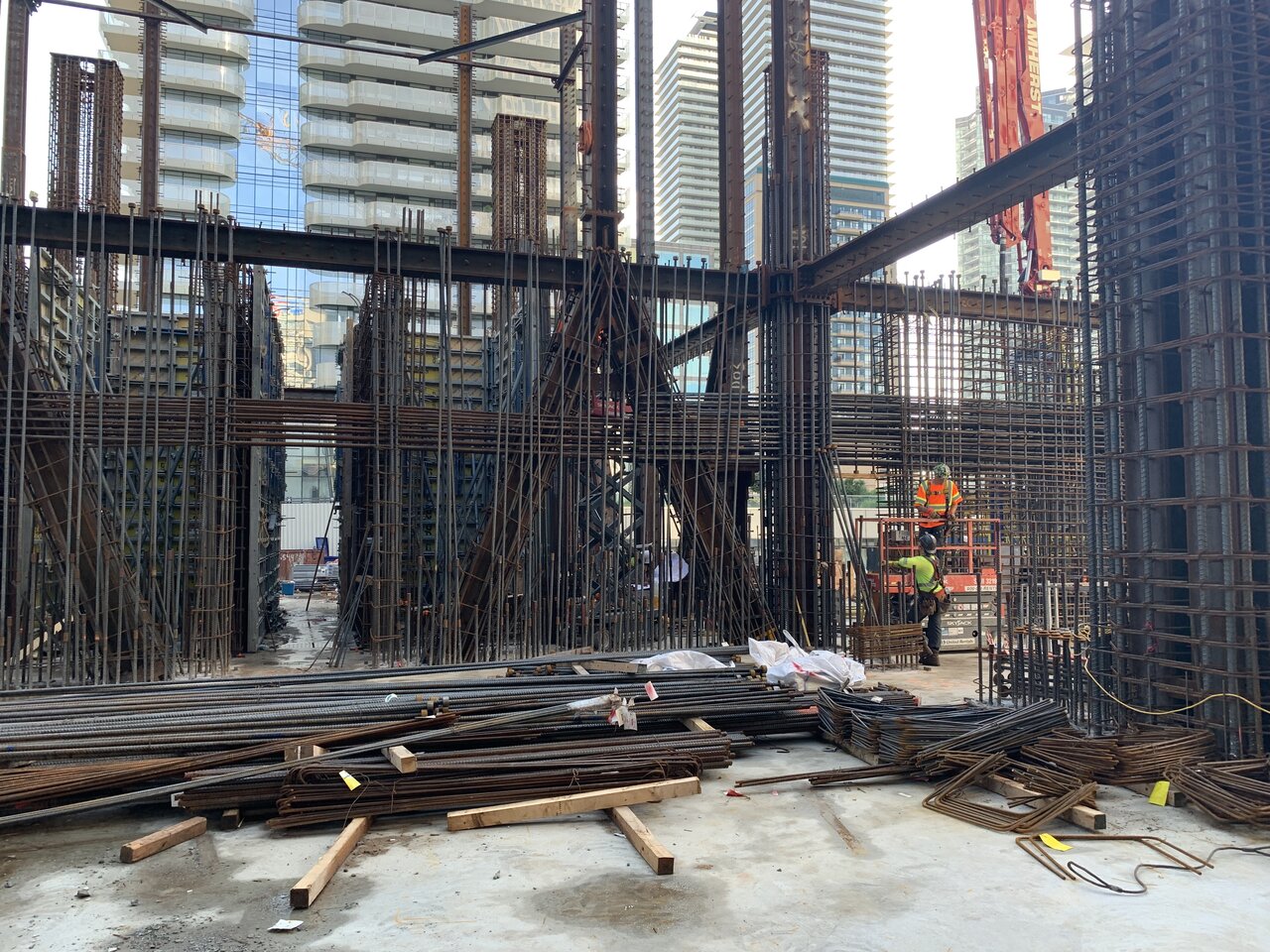 Back up on the fifth floor, crew members can be seen installing rebar that will be encased by wall forms for the upcoming pour. The structural steel that is seen rising above the wall forms will itself become part of the walls and columns of not just the fifth floor, but the sixth and seventh as well. 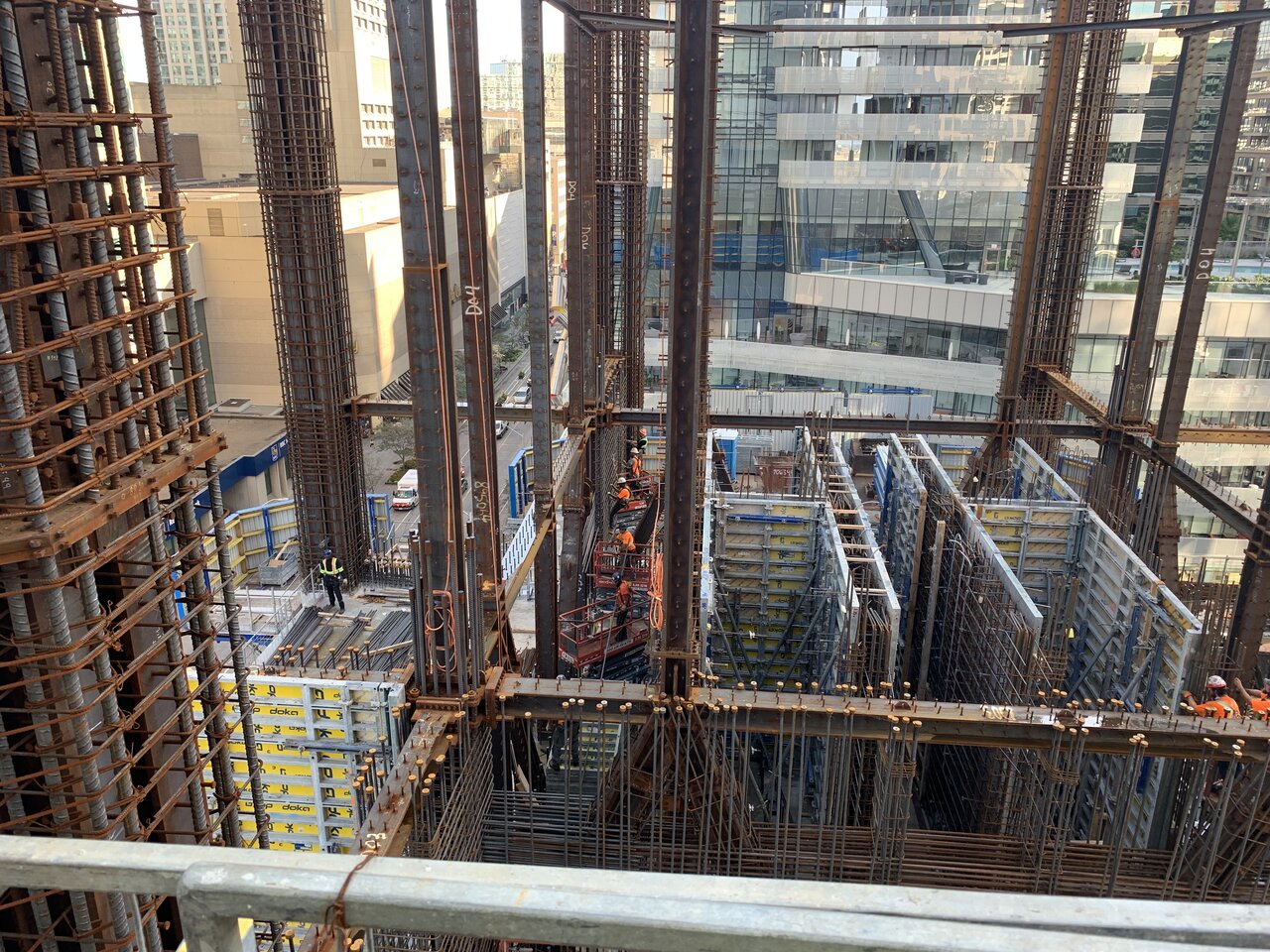 Currently, plywood sits between the tops of the elevator core forms, first to be used as a platform to stand on when the 5th floor walls are poured, and next as the underside of 6th floor slab. 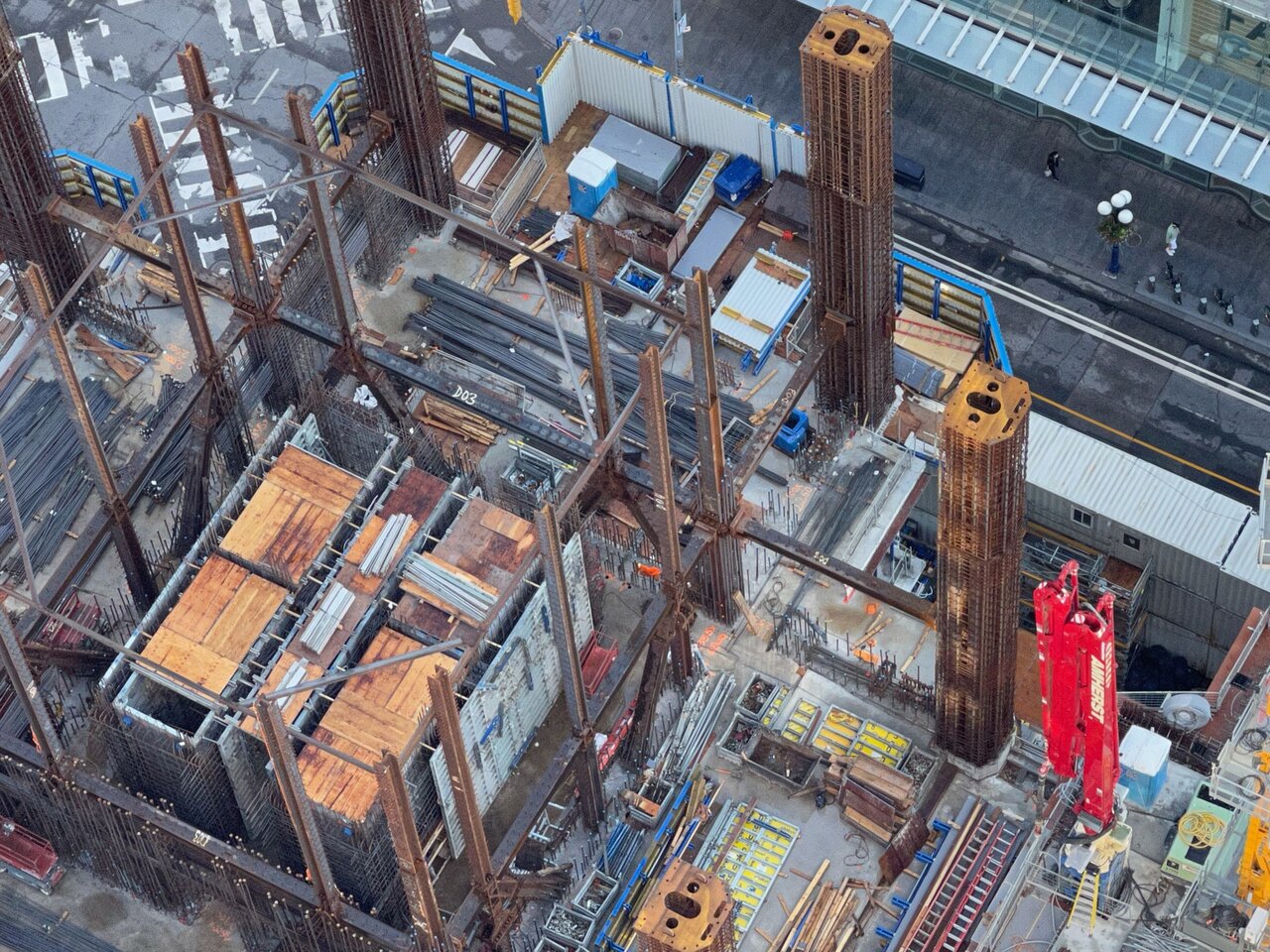 Overhead view of The One site, image by UT Forum contributor Benito

Our update at the beginning of July shared that massive glass panels were being installed at street level. The very precisely made glass was transported here from Germany and will eventually front The One’s flagship ground floor retail space. Now, with the window panels installed, openings remain for doors. 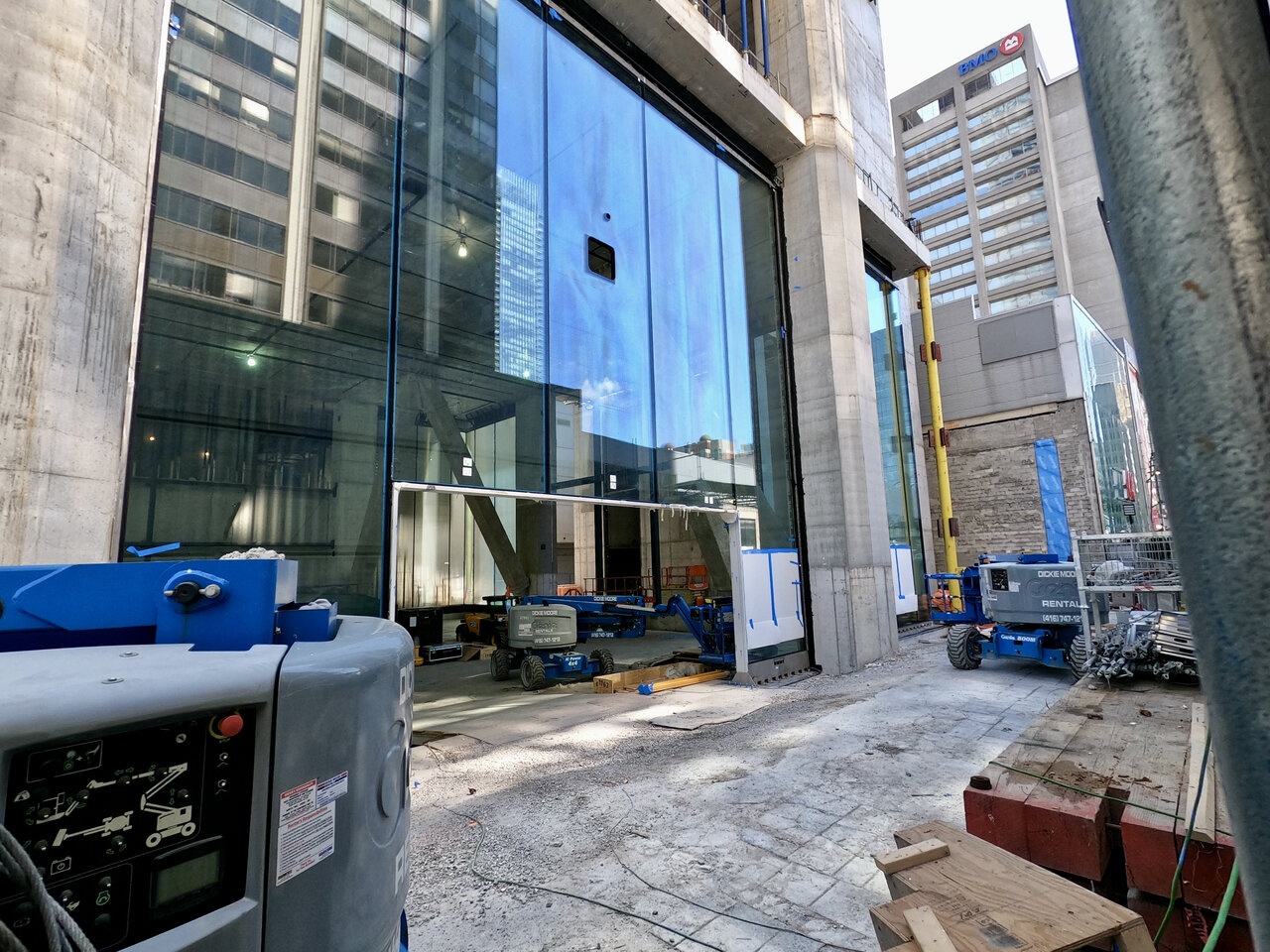 The One was approved at a height of 85 storeys, 308.6 metres. The building is among the pair of projects currently contending for the title of Canada’s tallest building, along with the 312.5-metre SkyTower at Pinnacle One Yonge, which is now in the early stages of construction only a couple of kilometres to the south. Seeking a height increase from the City, The One is now proposed to rise to 94 storeys and 338.3 metres high. If the increase is permitted, The One would retain the record as the tallest building in the country.

94-storey version of The One, image courtesy of Mizrahi Developments