With the enormous success of Expo ’67 in Montréal, a World’s Fair marked by daring modern architecture built on newly enlarged islands in the St Lawrence River, the Government of Ontario wanted to put a similar attraction on Toronto’s waterfront that spoke to the optimism of the time, with equally daring architecture on freshly built islands in the lake. Ontario Place opened just four years later in the summer of 1971, sporting its iconic Eberhard Zeidler-designed pods, Cinephere, an outdoor music venue called the Forum, restaurant villages, a marina, and a year later the massively popular Children’s Village, a playground that blew your local neighbourhood one out-of-the-water. Initially a huge success, over the years Ontario Place attractions were altered to greater or lesser degrees, with shows within the pods gradully being replaced with new ones, Children’s Village replaced by a separate admission water park, and a pavilion added to the West Island aimed at boosting tourism in Northern Ontario which featured a flume ride, among other changes. Despite the attempts to refresh Ontario Place, annual attendance of about 3 million in the mid-1970s had dropped to less that 600,000 in 2011, and it was announced in February, 2012 that Ontario Place would close while the government looked for ways to redevelop it in a similar spirit.

The first years of redevelopment planning led to very little, other than a universally loved new park on its eastern edge named Trillium Park, with its landscaping, pavilion, and views of Downtown Toronto and Lake Ontario being a big hit. While Budweiser Stage (the replacement for the Forum—initially named the Molson Amphitheatre) has continued to host concerts, and the Cinesphere present films on its massive IMAX screen, the other buildings have generally languished, and in May, 2019 a new call for proposals for the site was made. This morning, a press conference was held at Ontario Place to announce the three winning bidders who will each redevelop portions of the site. They are the Écorécréo Group of Montréal who will build an outdoor adventure park, Live Nation Entertainment (the developers of Budweiser Stage) who will rebuild and enhance that venue so it can function year-round, and the Therme Group of Vienna who will build a giant indoor waterpark and spa. Bowing to public pressure, the Cinesphere and Pods will remain, as will Trillium Park. Today’s announcements do not cover all of Ontario Place’s grounds, and do not preclude more announcements in the future, although no more announcements are expected in the near-term. 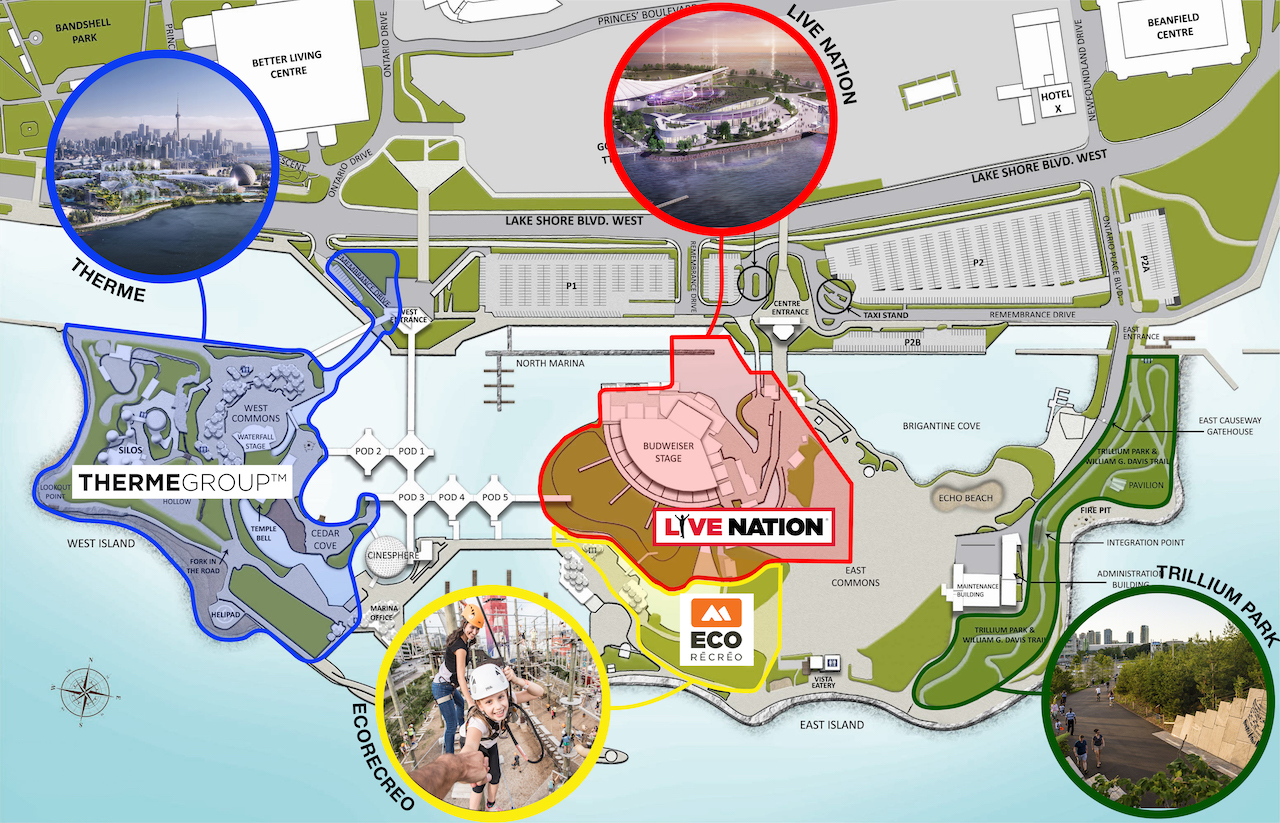 Where each of the new attractions will be built at Ontario Place, image courtesy of the Ontario Government

Écorécréo will be building on the East Village grounds, south of the Budweiser Stage, and beside the marina. The company operates about 20 outdoor adventure parks in Québec, including the 2015-built Voiles en Voiles in Montreal’s Old Port area, and it is a photograph of this site that the company has issued with today’s press release, giving an indication of their intentions here. 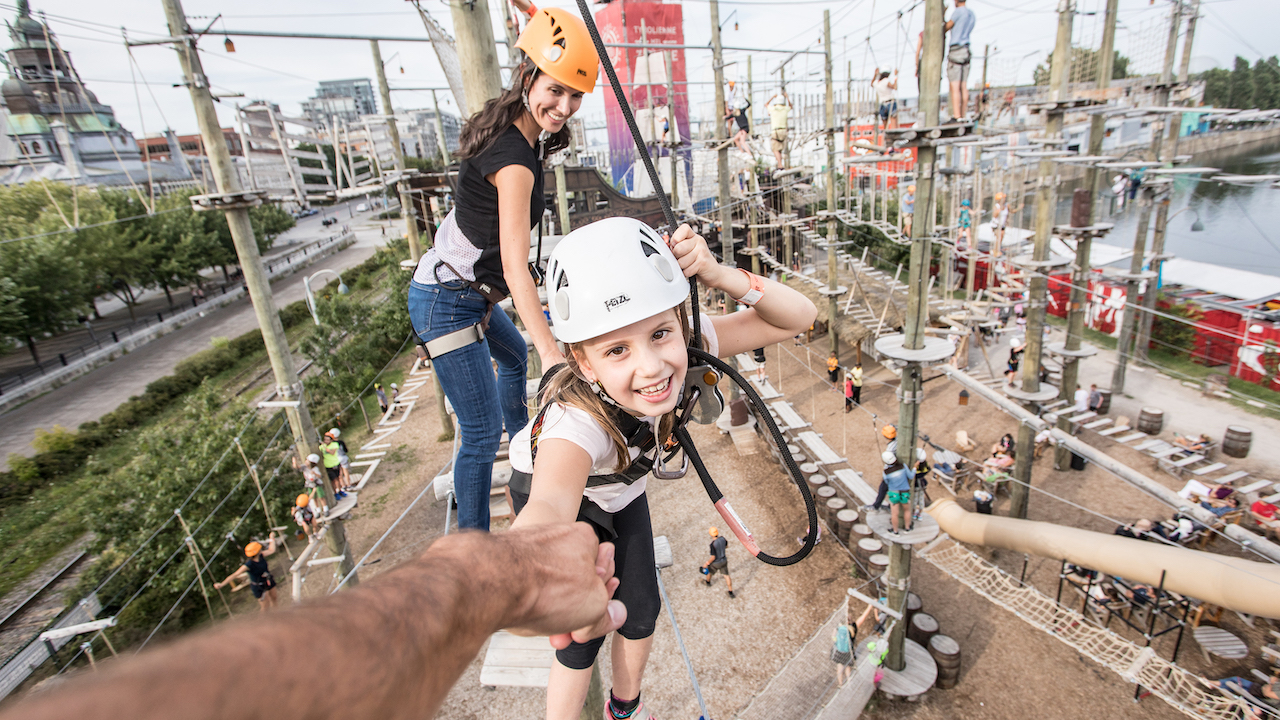 A video presented by Écorécréo co-owner Jean-Philippe Duchesneau introduces the activities planned for the site including aerial obstacle courses, zip-lines, escape games, climbing walls, and more. Écorécréo intends to open their park by 2024, and aiming to attract a half million admissions per year by 2030. Current prices at Voiles en Voiles in Montréal are $36 for children 3 to 5 years old, $54 dollars for those 6 years old and up, or $195 for a family of four. Those tickets cover four hours on the equipment, while other tickets at lower prices cover shorter periods and/or smaller sections of the park.

Live Nation’s plan is to replace the 1995-built Budweiser Stage with a new concert venue by 2030. The current venue has a capacity of about 16,000 with 5,500 reserved seats under its roof, another 3,500 beyond the roof, and space for about 7,000 people on the grassed bowl to the south. With retractable walls, the new venue would host up to 20,000 during the outdoor season with the walls open, roughly from May through to October, while 9,000 seats will be available inside during winter months with the cold weather sealed out. No architect has yet been named as the designer of the new venue. 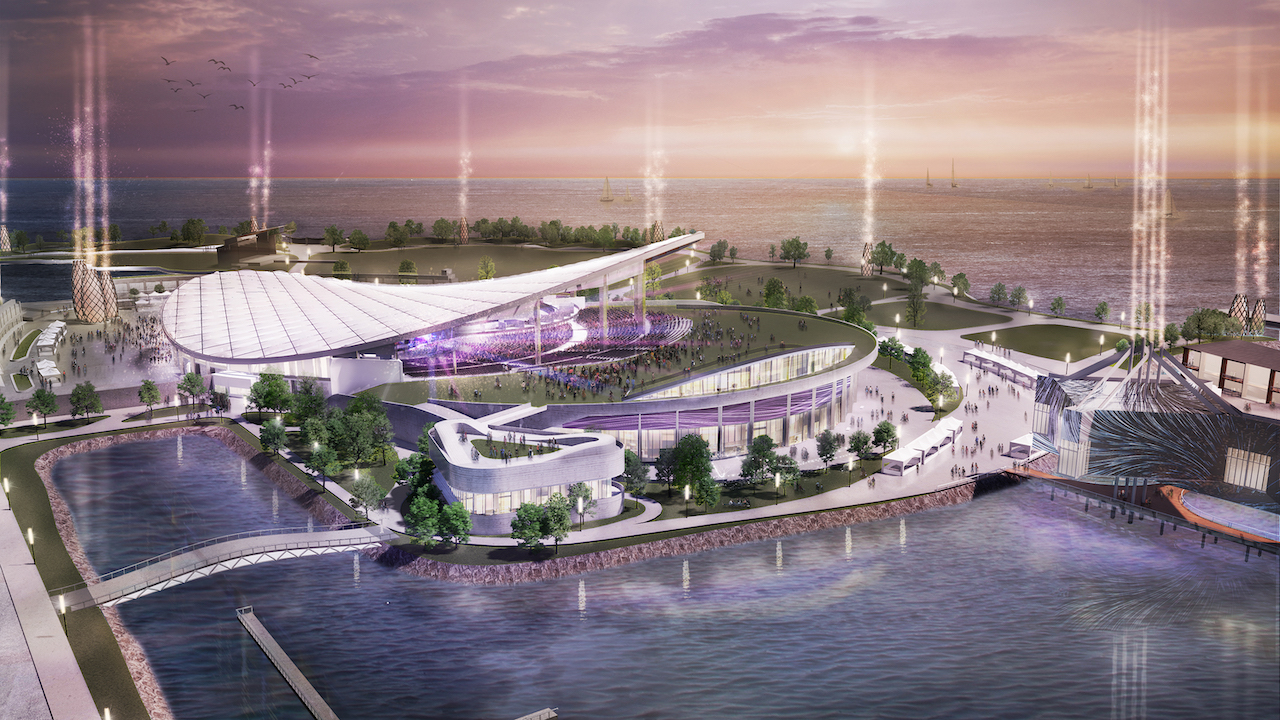 Live Nation intends to create a state-of-the-art facility, no just in terms of concert experience regarding sight, sound, and comfort, but also in regards to sustainability of the venue, the press release stating that it will be “designed and  built using strategies aimed at improving performance across all the metrics that matter most: energy savings, water efficiency, greenhouse gas emissions reduction, improved indoor environmental quality, and stewardship of resources and sensitivity to their impacts.” 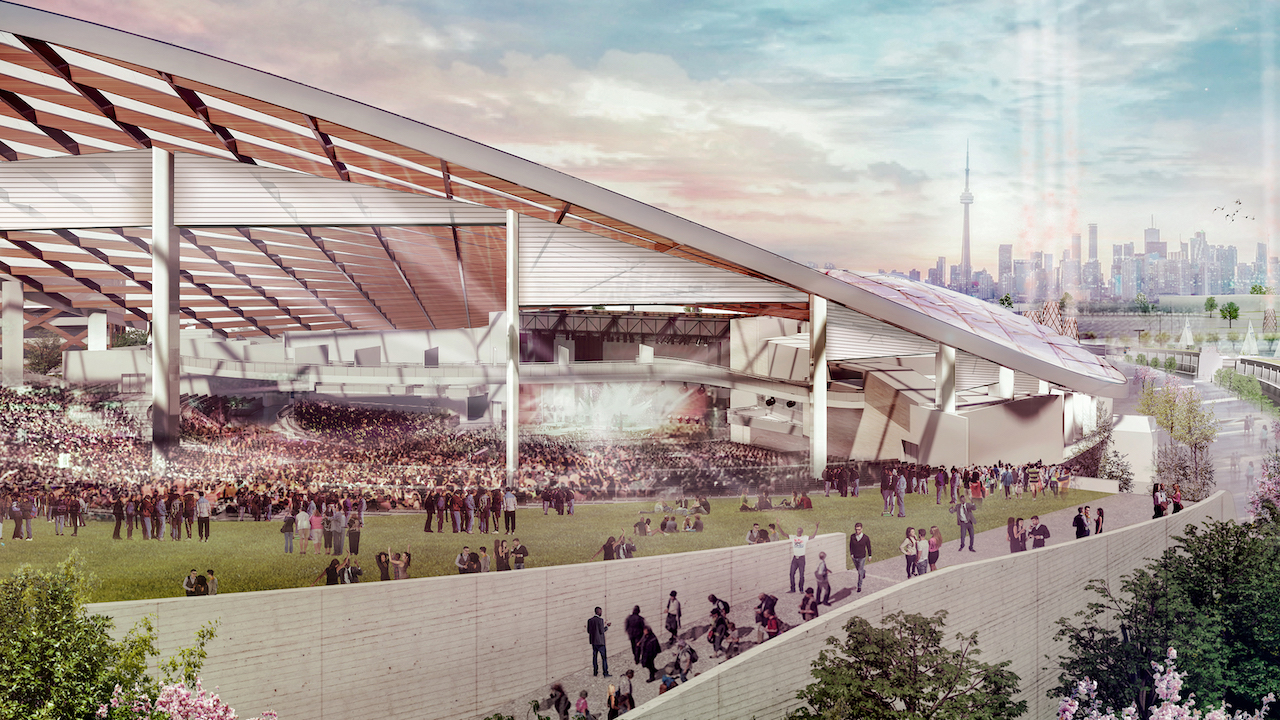 Riley O’Connor, Chairman of Live Nation Canada’s statement reads “The redevelopment of the amphitheatre into a year-round venue means that fans will have increased opportunities to enjoy the live experience in our city. We’ve been making memories at Budweiser Stage for 25 years now, and we look forward to bringing even more music to Toronto.” While events are taking place, the new venue will support 900 jobs.

Therme Group’s plans represent the most transformative part of what was announced today, with plans for “an affordable, all-season destination that has something for all ages. Therme Canada | Ontario Place will be a family-friendly experience with options that appeal to everyone, including pools, waterslides, botanical gardens to relax, and sports performance and recovery services.” 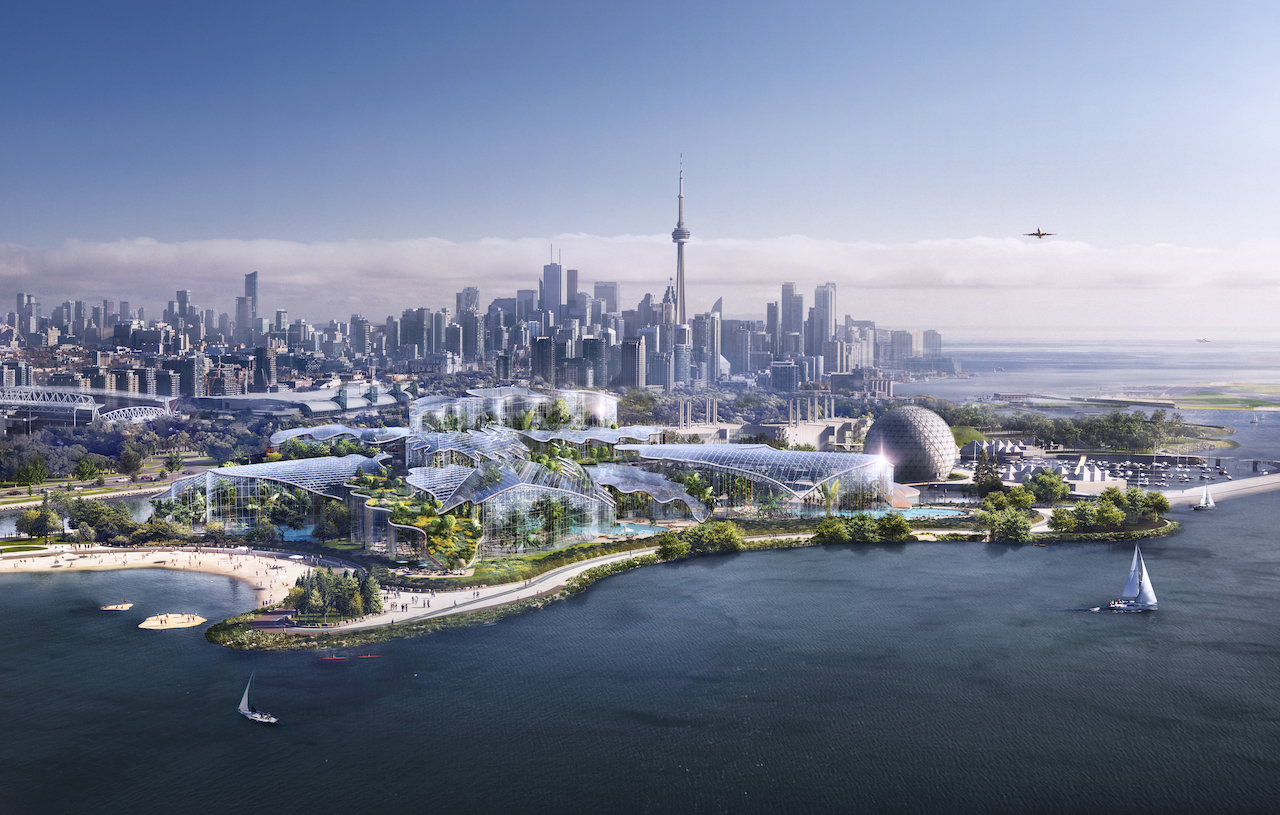 Looking northeast to Therme Canada at Ontario Place with the Toronto skyline in the distance, image courtesy of Therme Canada

New to North America, Therme Group of Austria runs three wellbeing resorts/waterparks in Germany and one in Romania, while others are in development in Manchester, UK, and Frankfurt, Germany. Three more UK locations are in the planning stage, as are locations in Asia. Toronto is the first location announced by the Group’s North America regional company, although more locations on the continent are said to be in the works. Therme Group expects that the Toronto location will cost upwards of $350 Million, and replace most of what is on Ontario Place’s West Island, although the company will keep 8 acres of West Island space publicly accessible for free, including “gathering spaces, outdoor gardens, and public beaches.” 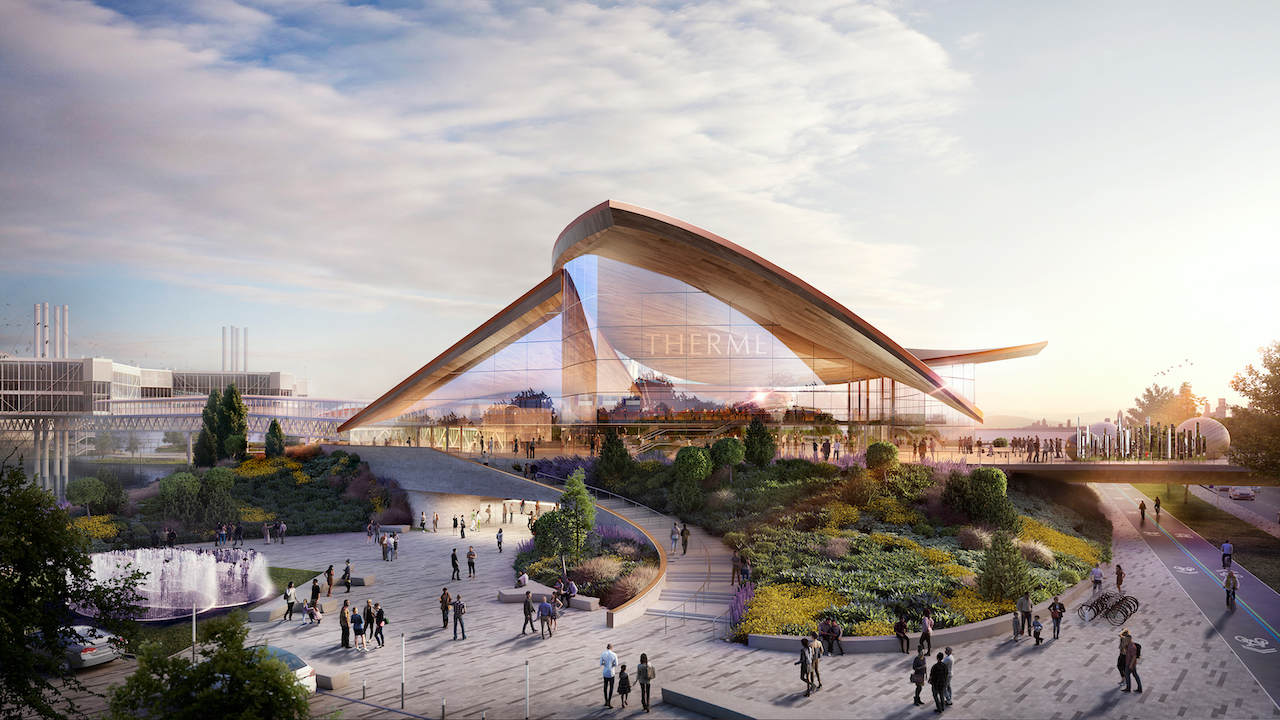 Therme has engaged Diamond Schmitt Architects to lead the design of their facilities, which generally will be an entrance pavilion that will replace Ontario Place’s current West Entrance building, the main Therme Canada | Ontario Place building on the West Island, and an indoor/outdoor bridge to connect the two. 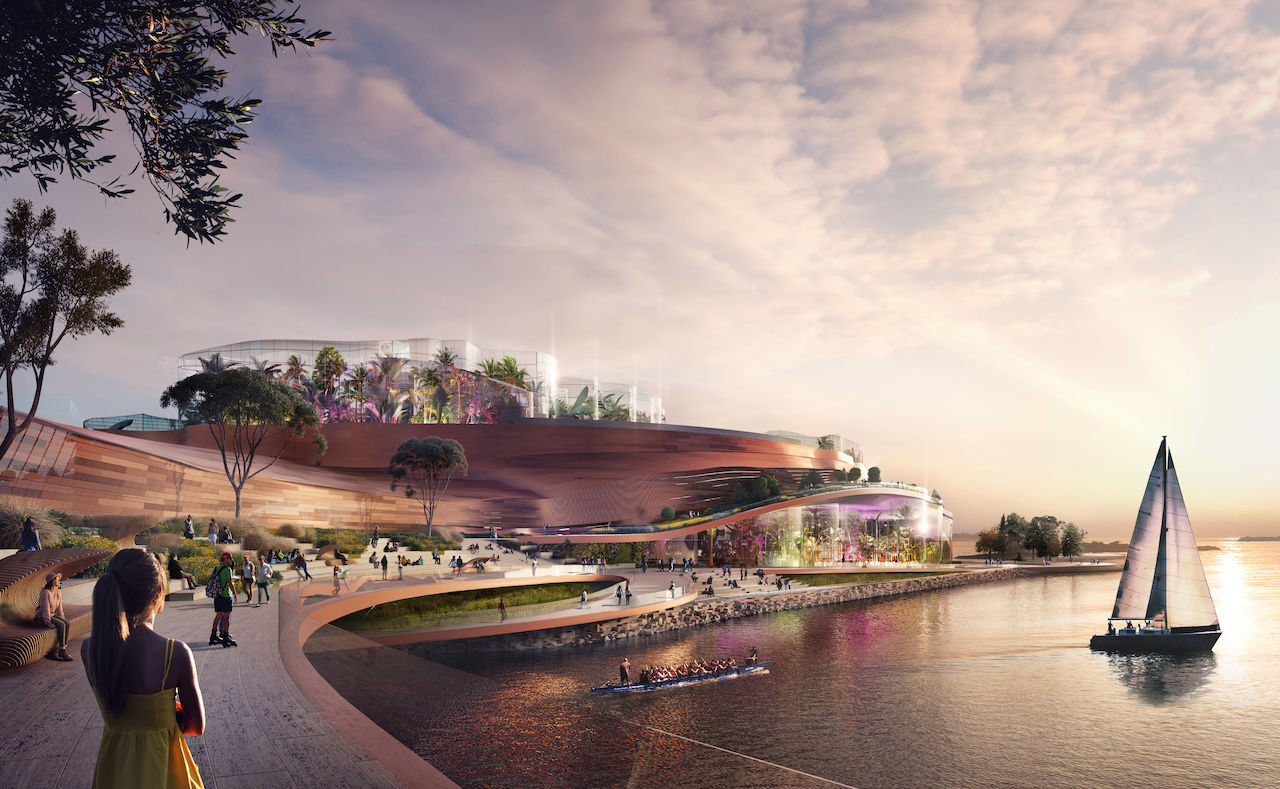 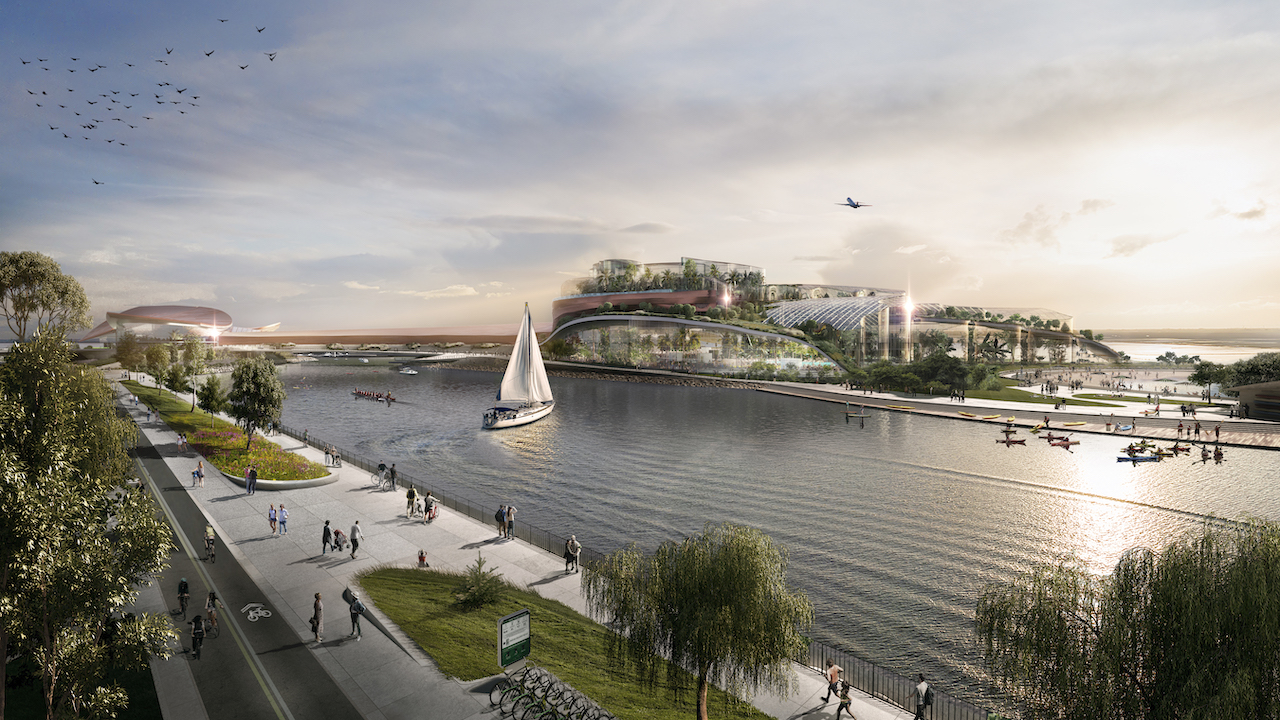 Looking southeast across the West Channel to Therme Canada at Ontario Place with the Toronto skyline in the distance, image courtesy of Therme Canada

Diamond Schmitt’s press release says that the design incorporates three themes that they are expressing through the architecture: “the scale and spirit of exhibition pavilions; the restorative qualities of natural forms; and the transparency of greenhouse architecture.” 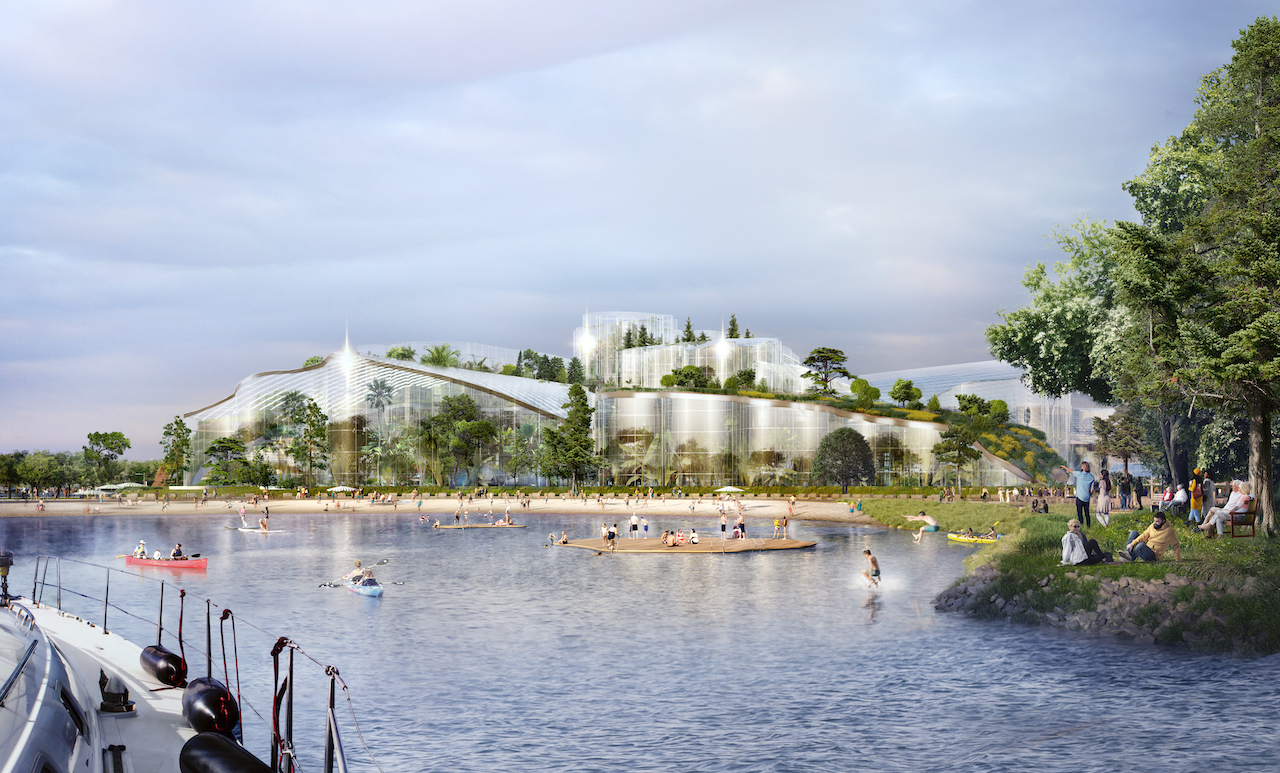 A promotional video from Therme Group outline their plans:

Although no opening date has been provided for Therme Canada, the construction of the facility is expected to create 2,200 jobs during construction, and 800 jobs once it is operating.

The land the new attractions will be located on is not being sold by the province, and the government promises that the grounds with their lakeside access will be open year-round, including during construction periods. No condos are planned, nor will their be a casino, a previous plan by the Ontario Gaming Commission that was given thumbs down by Toronto City Council in 2012.

The province, which appointed former Toronto Police Chief Mark Saunders as Special Advisor for Ontario Place in 2019, says that he “will continue to engage with the City of Toronto, Indigenous communities, key stakeholders, businesses and community groups that have interest in the Ontario Place site to ensure all perspectives on this important project are recognized and considered.” The government is also talking with the Ontario Science Centre about creating “science-related tourism and educational programming at the Cinesphere and pod complex,” although no further details are yet known. The public, meanwhile, will be given an opportunity in late August to share their vision for the site, while public information sessions will be held virtually in the fall, “with planning and development consultations related to the site-wide environmental assessment, heritage, and site servicing to follow in early 2022.”

At the press announcement, Premier Ford was asked how much money the province would be putting into the redevelopment but did not have a dollar figure, stating instead that there would be substantial provincial money invested to allow for affordable family outings at the attractions, and that figures would be announced as planning progresses, promising transparency in regards to spending.

You can learn more about recent work at Ontario Place from our Database file for the site, linked below. If you’d like to, you can join in on the conversation in the associated Project Forum thread, or leave a comment in the space provided on this page.