New Towers Top Out in The Kip District Community

Over the years, transit accessibility has catalyzed many development nodes across Toronto, and that now includes a lengthening stretch of development along Dundas Street West near Kipling subway and GO stations. Several multi-tower residential developments are planned and under construction along this strip on the west side of the city, with Concert Properties‘ five-tower Kip District community the focus of this story. The complex is already home to a 2018-opened, 28-storey condo tower. Now, the next two towers in the community have reached a milestone, with forming recently bringing the buildings to their final heights. 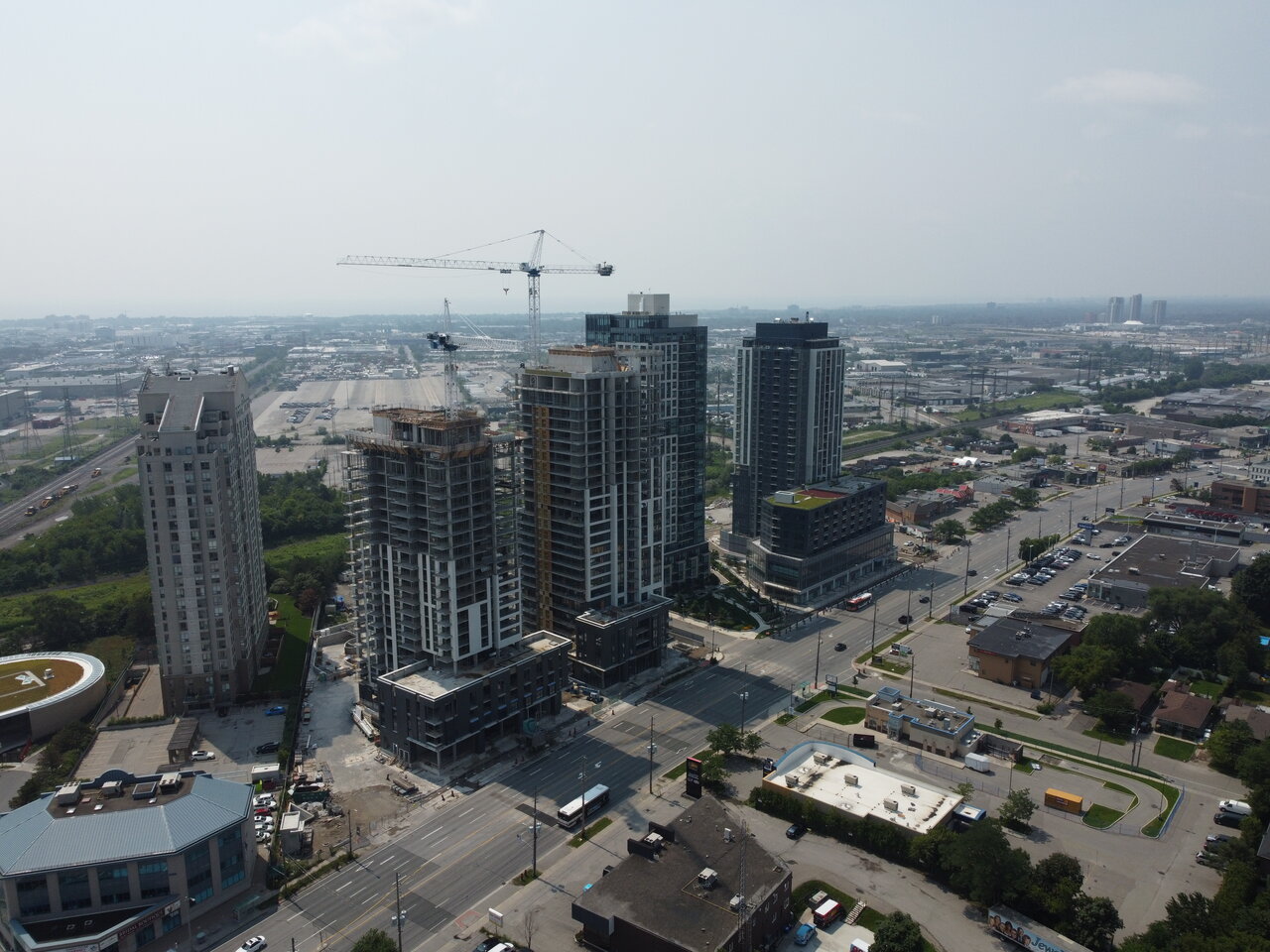 Looking southwst across Dundas to phase two of The Kip District, image by Forum contributor bangkok

Following on the IBI Group-designed first phase, The Kip District’s second phase, under construction since August, 2019, includes a 24-storey condo tower to the west and a 21-storey purpose-built rental apartment building to the east, both designed by BDP Quadrangle. We last checked in on its progress in February when both towers were quickly rising above Dundas Street. At that time, the condo tower was having its 13th level formed, while the rental building’s 9th floor was taking shape. July saw the completion of forming for the taller condominium tower with the pouring of its final residential level and mechanical penthouse above reaching a height of about 76 metres. 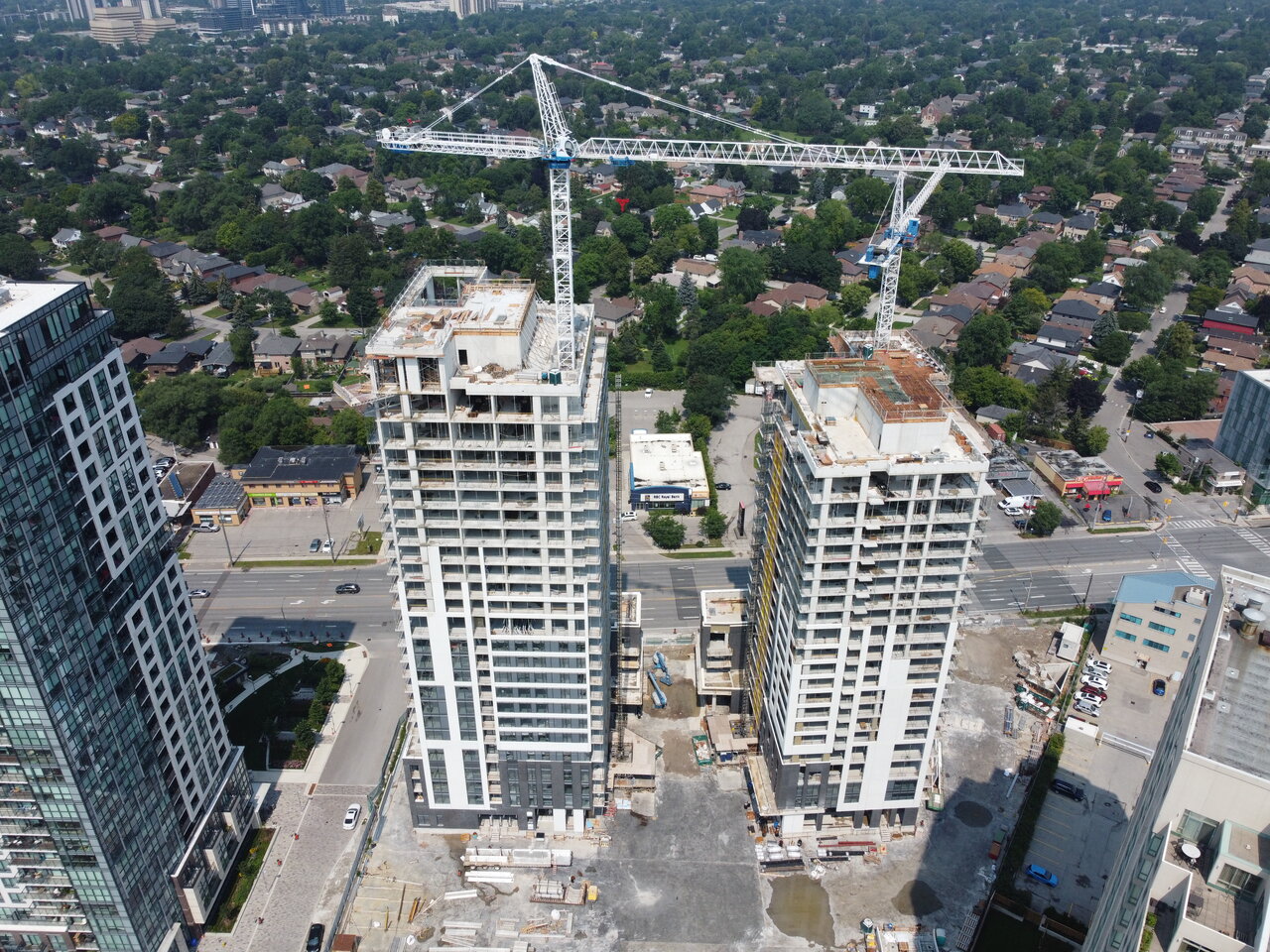 The rental tower is now in the process of having the roof of its mechanical penthouse level formed, with the removal of formwork soon to reveal the building’s roofline at almost 62 metres in height. 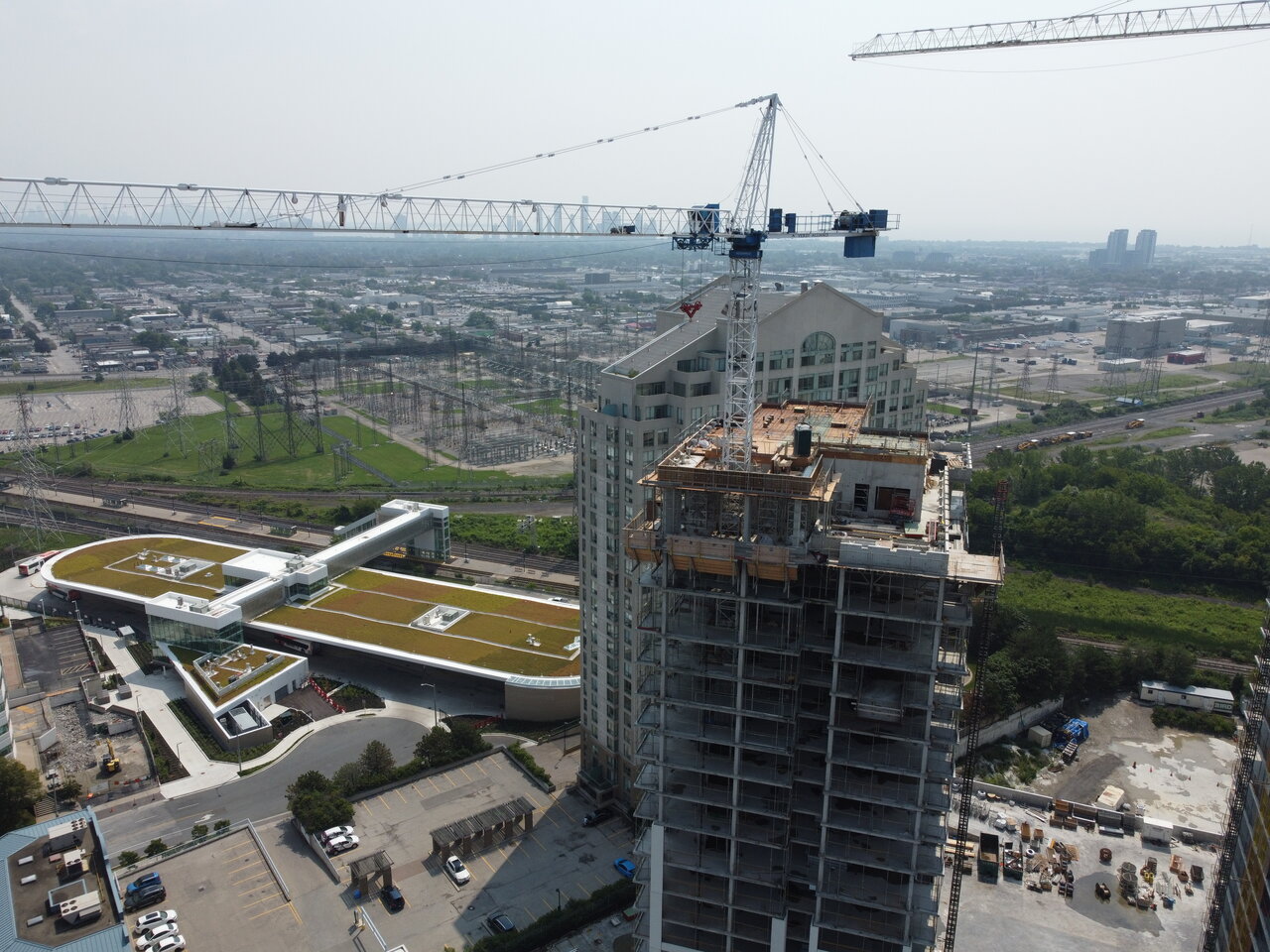 Our last update also covered the start of cladding installation for the condominium tower, with finishes in the form of brick-embedded precast panels, window wall panels with reflective glazing framed in black mullions, and white precast framing. Cladding now reaches as high as the 17th floor of the condo tower, and the 13th floor of the rental tower. 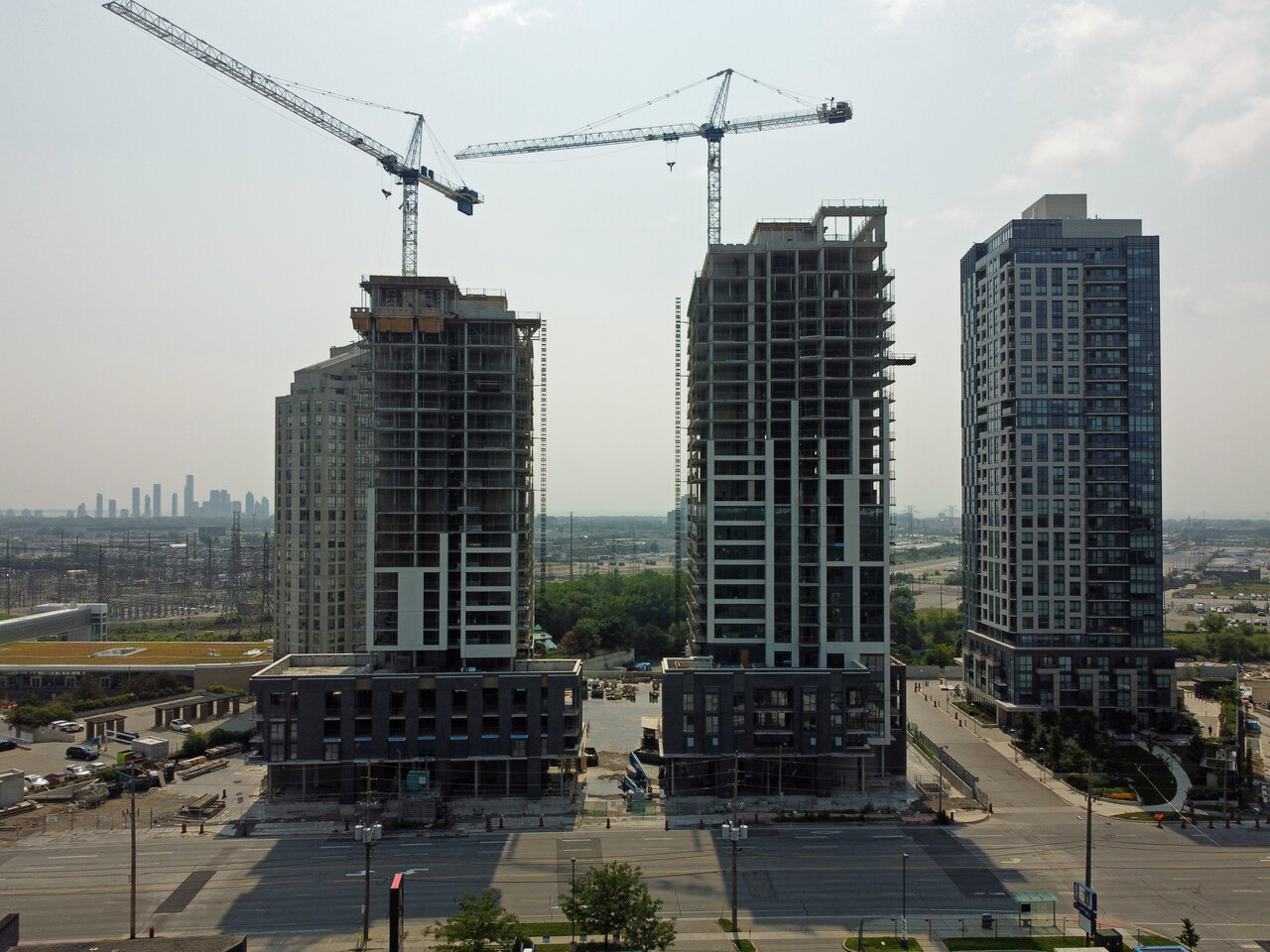 Looking across Dundas to phase two of The Kip District, image by Forum contributor bangkok

Once complete, the pair of buildings will bring over 500 combined condominium and apartment suites to the complex, with 286 condominium units and 233 purpose-built rental apartments. More density is on the horizon for the community, with the next pair of buildings proposed as IBI Group-designed residential towers of 37 and 40 storeys to rise along the southeast edge of the site near the rail corridor, and divided from the second phase towers by a landscaped courtyard. 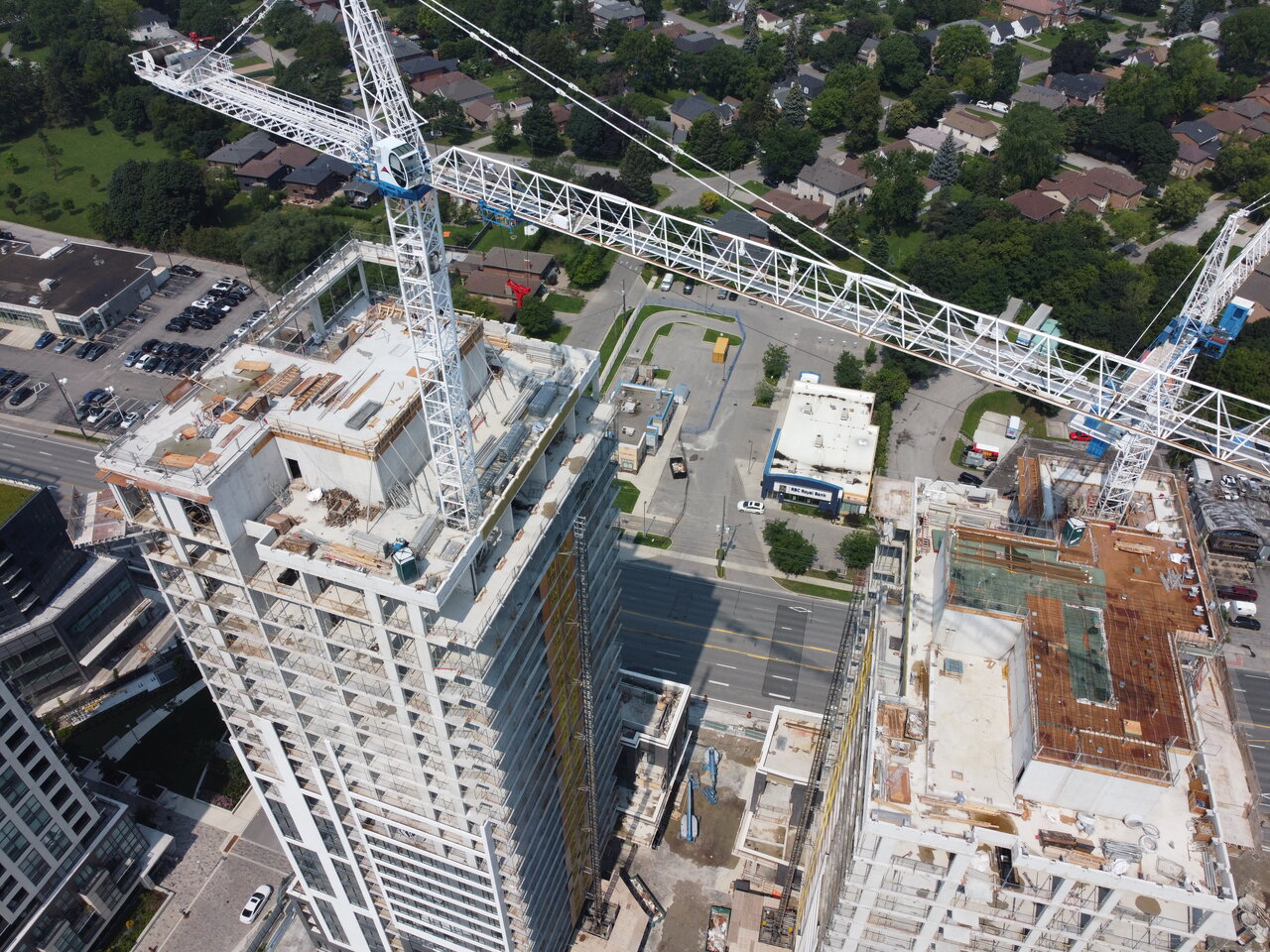 Phase 2 towers topping out at The Kip District, image by Forum contributor bangkok