On June 7, 2021, a new Zoning By-law Amendment (ZBA) application was submitted to the City of Toronto by Dream Asset Management Corporation on behalf of Dundeal Canada (GP) Inc. for a massive mixed-use development at Eglinton and Birchmount. The proposal, designed by BDP Quadrangle, with planning and urban design by Urban Strategies Inc. and a landscape plan by DTAH, would bring six new towers to a site currently occupied by low-rise retail and surface parking. It is just one of several recent proposals in Scarborough on the stretch of Eglinton Avenue known as the Golden Mile. Together they promise to transform the neighbourhood from a low-density shopping and employment district into a thriving mixed-use, transit accessible neighbourhood. 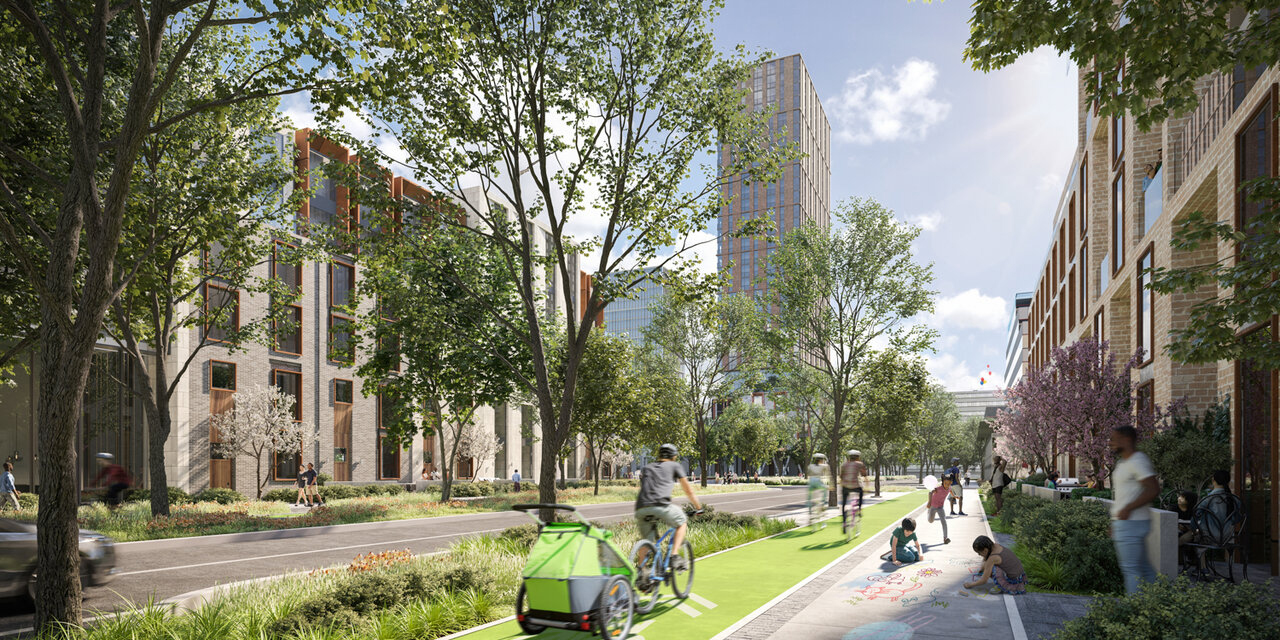 The most recent ZBA applies to the remainder of a larger master plan, the first part of which was the subject of an earlier ZBA application in June, 2020. That plan includes a further two towers at the corner of Birchmount and Eglinton, bringing the total to eight. 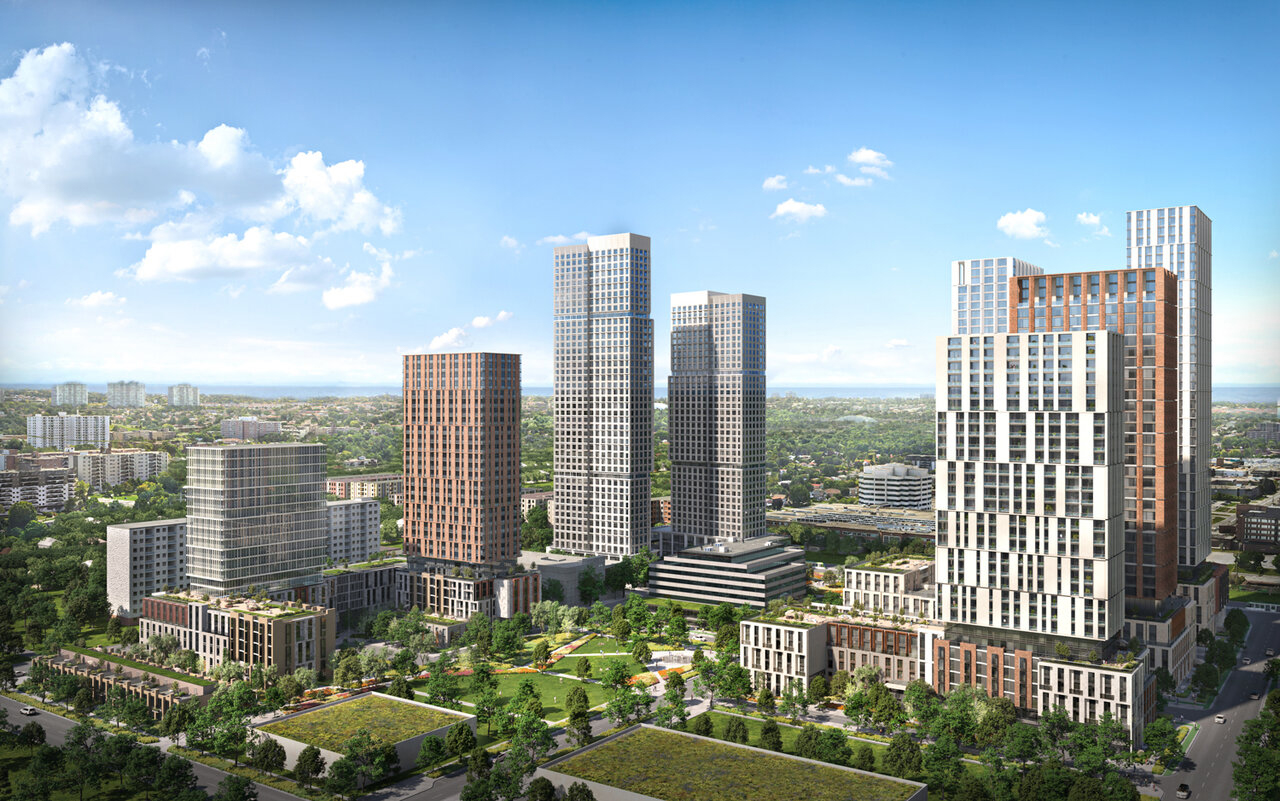 Rendering of the entire proposal looking south-east, image via submission to City of Toronto

Though submitted primarily in support of the most recent application, the latest documents also detail some changes to the wider plan, giving a clearer picture of what the site would look like once completed. 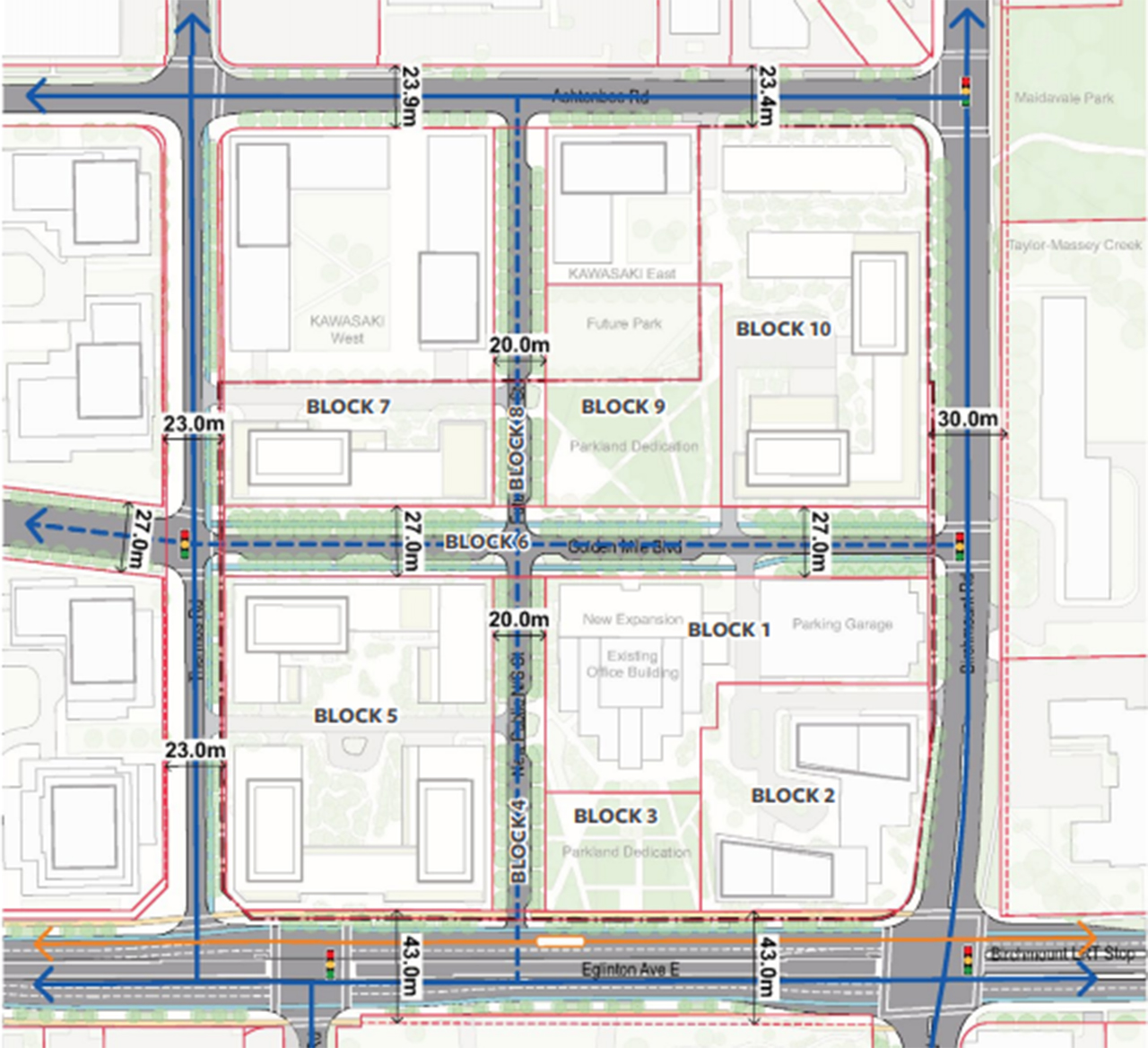 Site plan showing all ten blocks, image via submission to City of Toronto 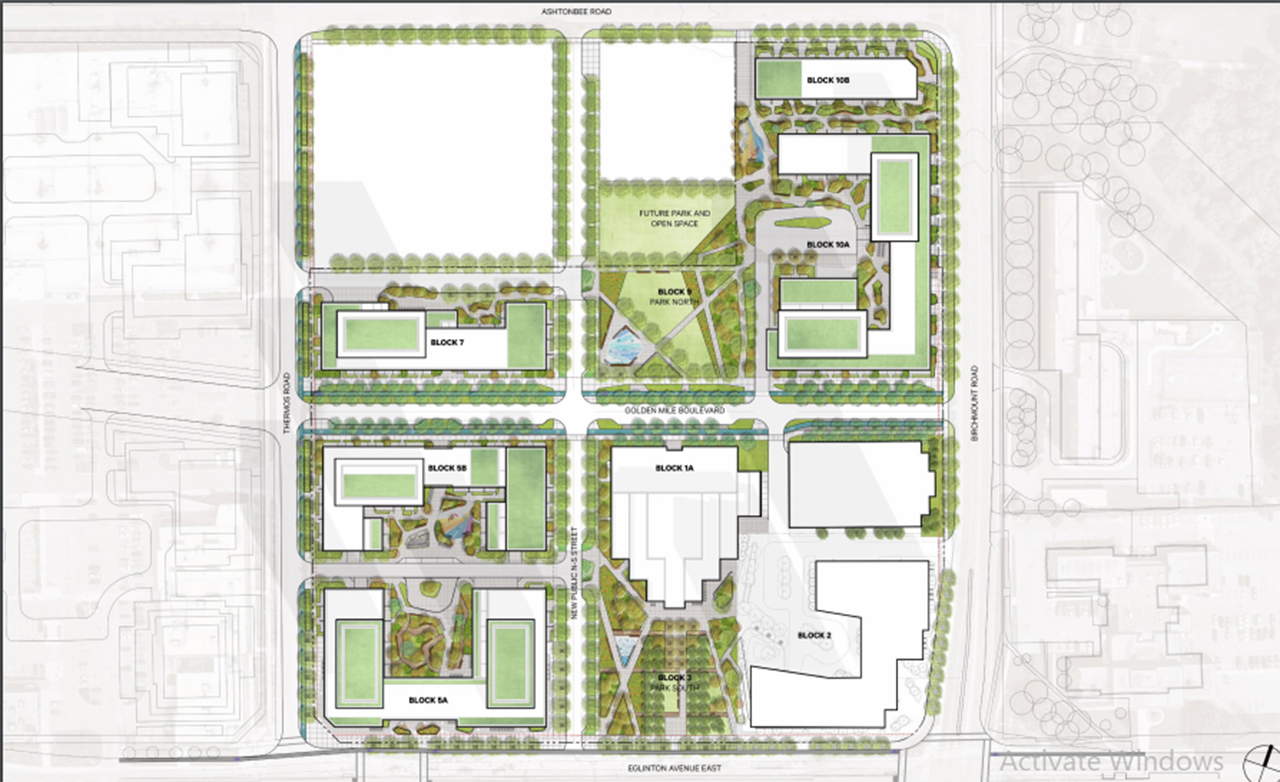 Proposed landscape plan, image via submission to City of Toronto 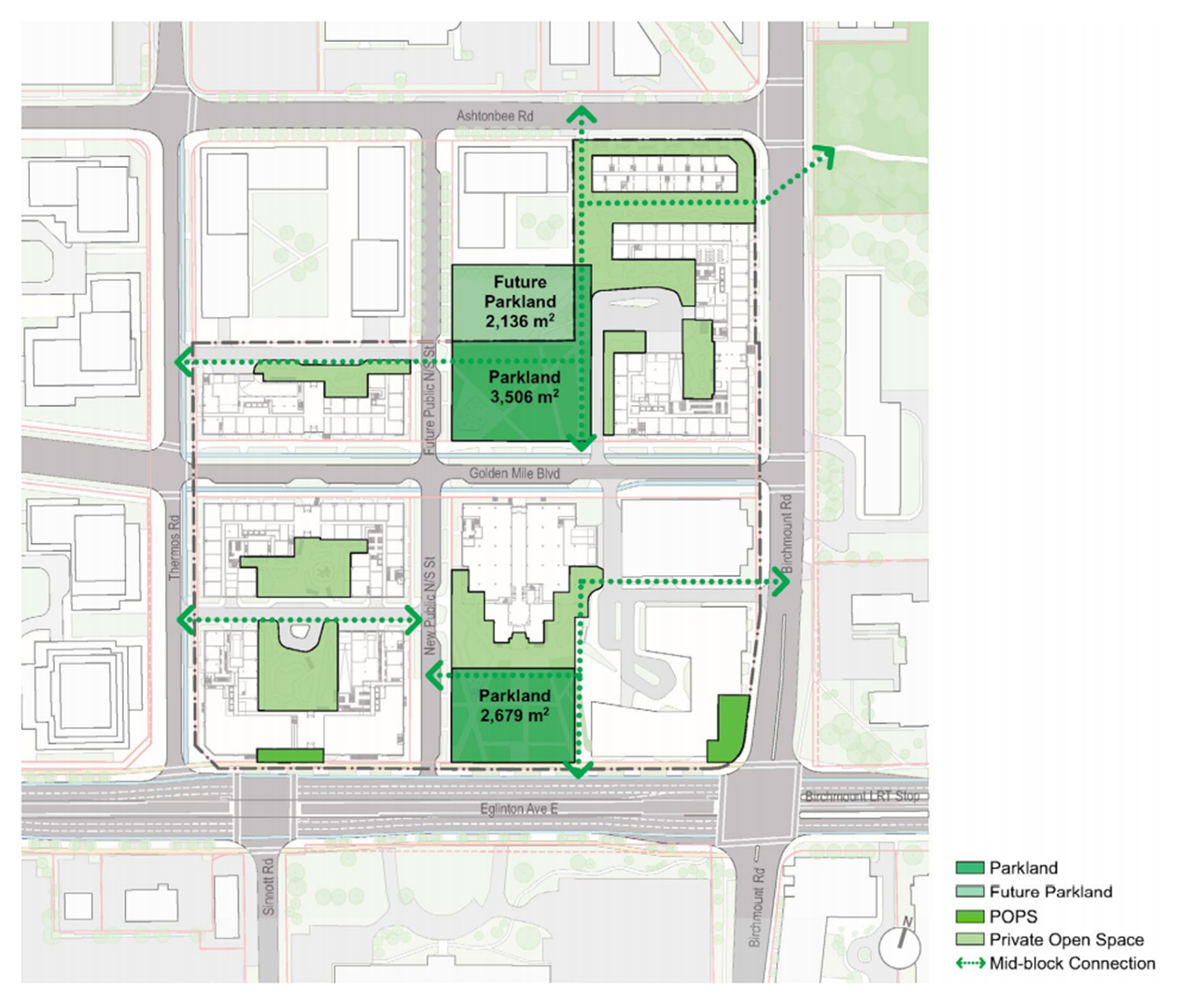 Despite the reduction in residential GFA, tower heights have been increased to a range of 20-48 storeys from the prior 20-46 storeys height range. This may not seem like much, but with a maximum allowable height of 30 storeys in the Golden Mile Secondary Plan (GMSP), any increase above and beyond this limit can be contentious. 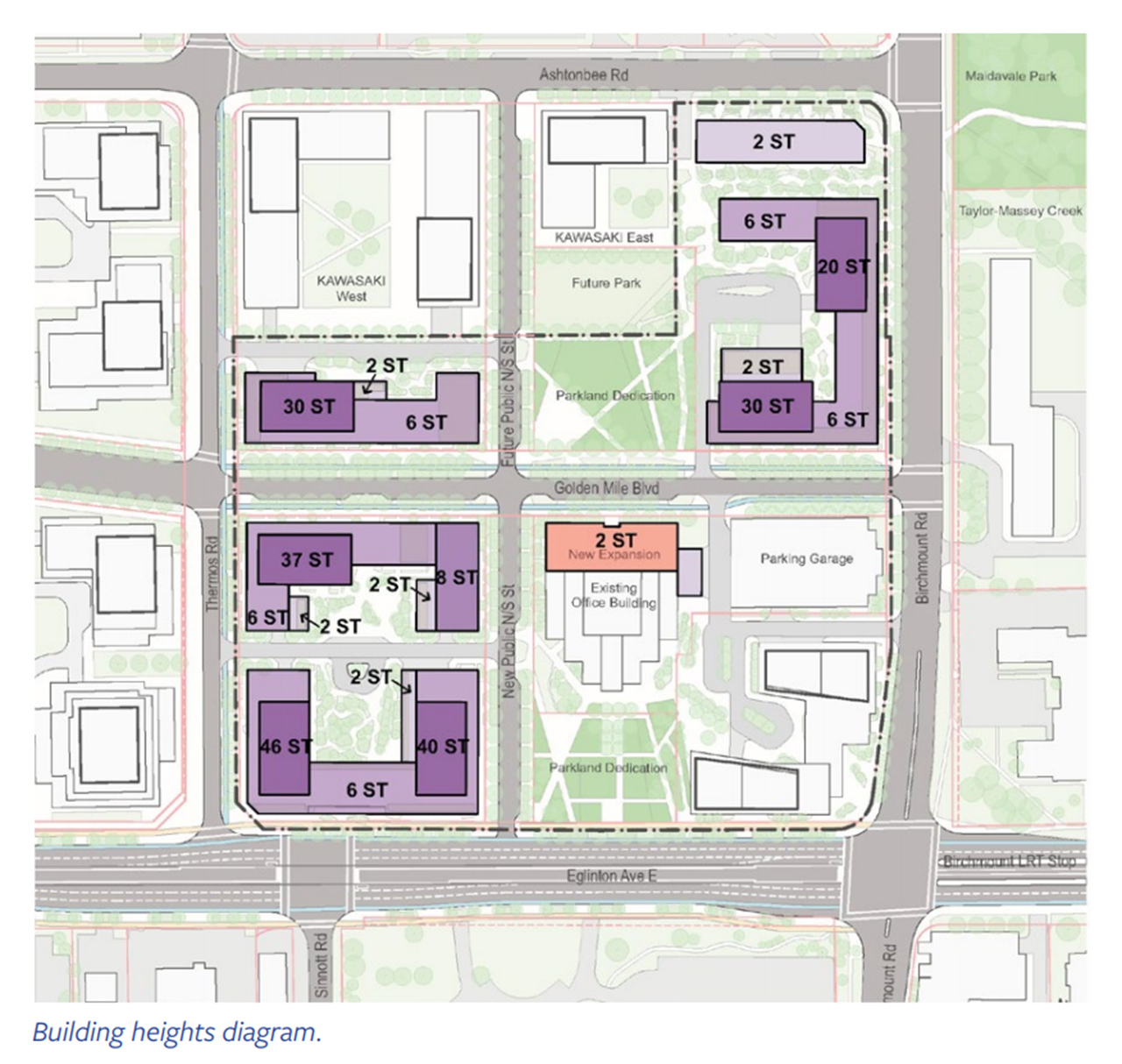 Diagram of proposed building heights, image via submission to City of Toronto

The proposal exceeds the provisions of the GMSP for overall density as well, with a Floor Space Index of 4.5, significantly higher than the permitted 3.5.

In their planning rationale, Dundeal justifies these exceptions on the basis of adherence to the more general planning principles of the GMSP, including the inclusion of new public streets and parks designed according to the guidelines set out there. In any case, they argue that the GMSP, which was adopted by City Council in October, 2020—long after the initial Site Specific Official Plan Amendment was filed for this proposal in 2018—does not apply. 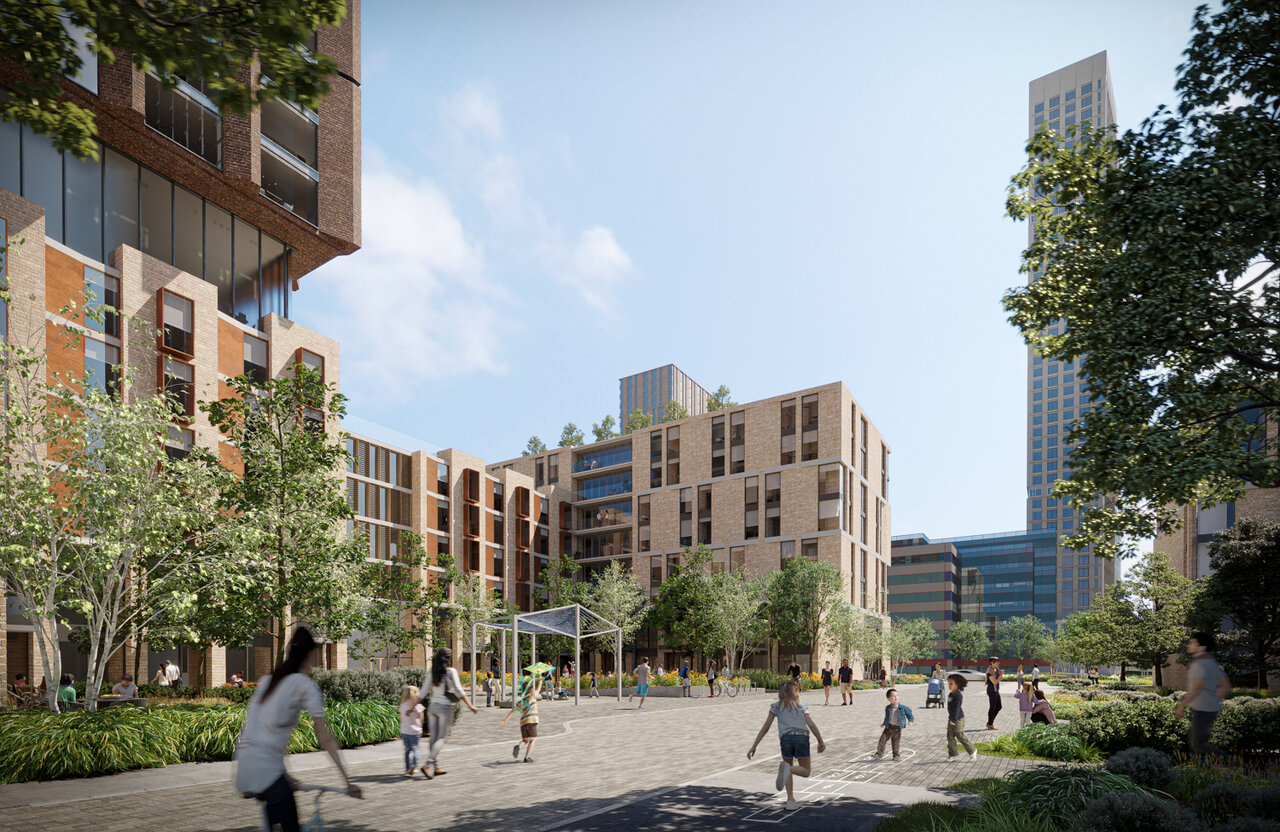 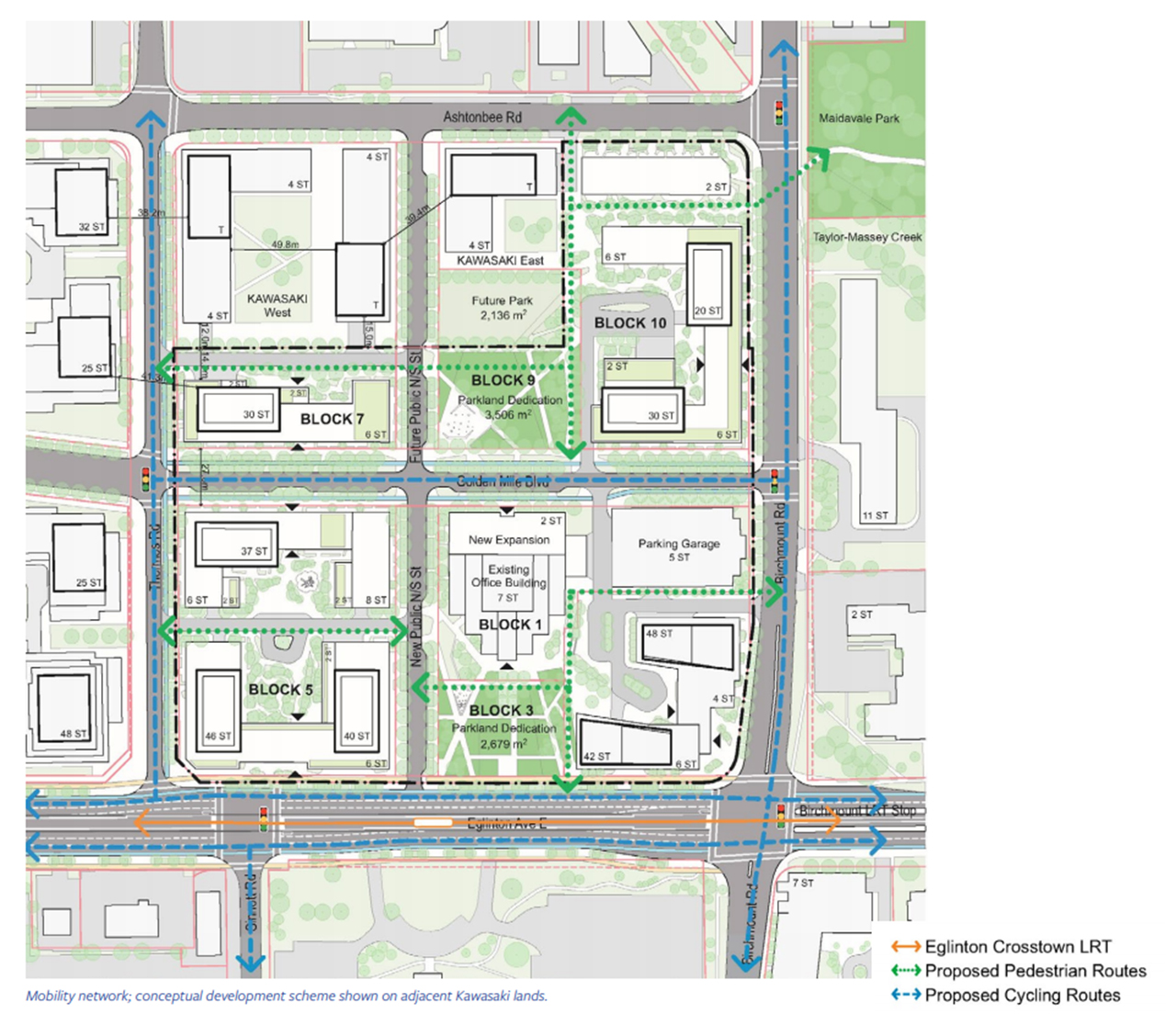 Proposed mobility network, including pedestrian, cycling, and transit routes, image via submission to City of Toronto

Meanwhile, Dundeal has joined several other local landowners in appealing the GMSP to the LPAT.

If eventually approved, the site would be developed in four phases, beginning with Block 2 at the corner of Birchmount and Eglinton. Phase 2 would proceed west, filling in the rest of the mega-block’s southern half, and including the first of two park spaces: Birchmount Park South. Golden Mile Boulevard, which will eventually form an east-west spine through the entire district (through adjacent sites), would be built during this phase. 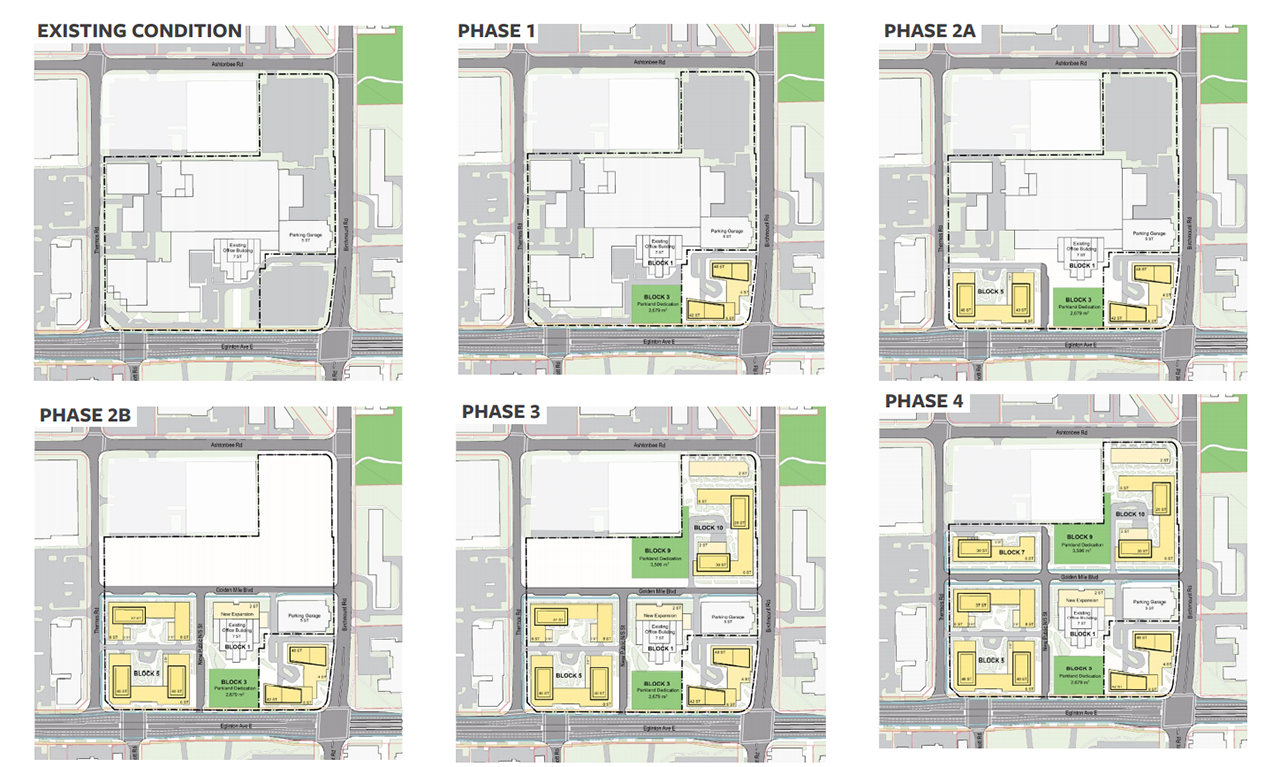 Proposed phasing plan, image via submission to City of Toronto

When all is said and done the site will be almost unrecognizable. All that will remain of what currently stands there are the existing 7 storey office building – modified by a 2 storey addition at its rear – with its adjacent 4 storey, 389-space parking garage. 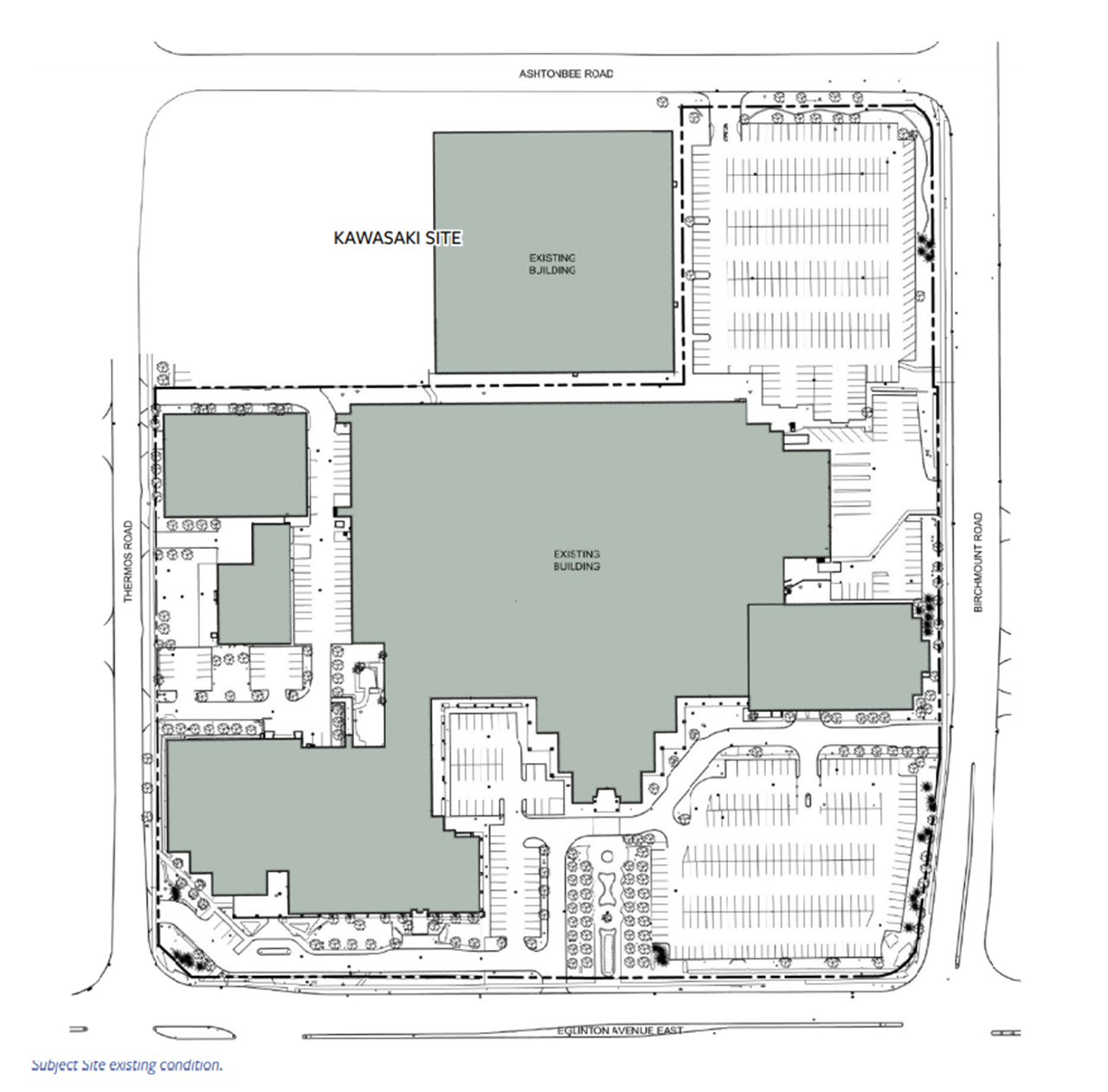 A map of the site in its current condition, image via submission to City of Toronto