A vocal opposition from neighbours in the ultra-affluent Toronto enclave of Rosedale were not enough to derail plans for a boutique, luxury condominium development at 7 Dale Avenue, currently under construction a short distance northwest of Castle Frank subway station. After a lengthy planning approvals process that started in 2016, the No7 Rosedale development from Platinum Vista Inc. was given the go-ahead for the low-rise development at the Local Planning Appeal Tribunal (LPAT) in mid-2019. 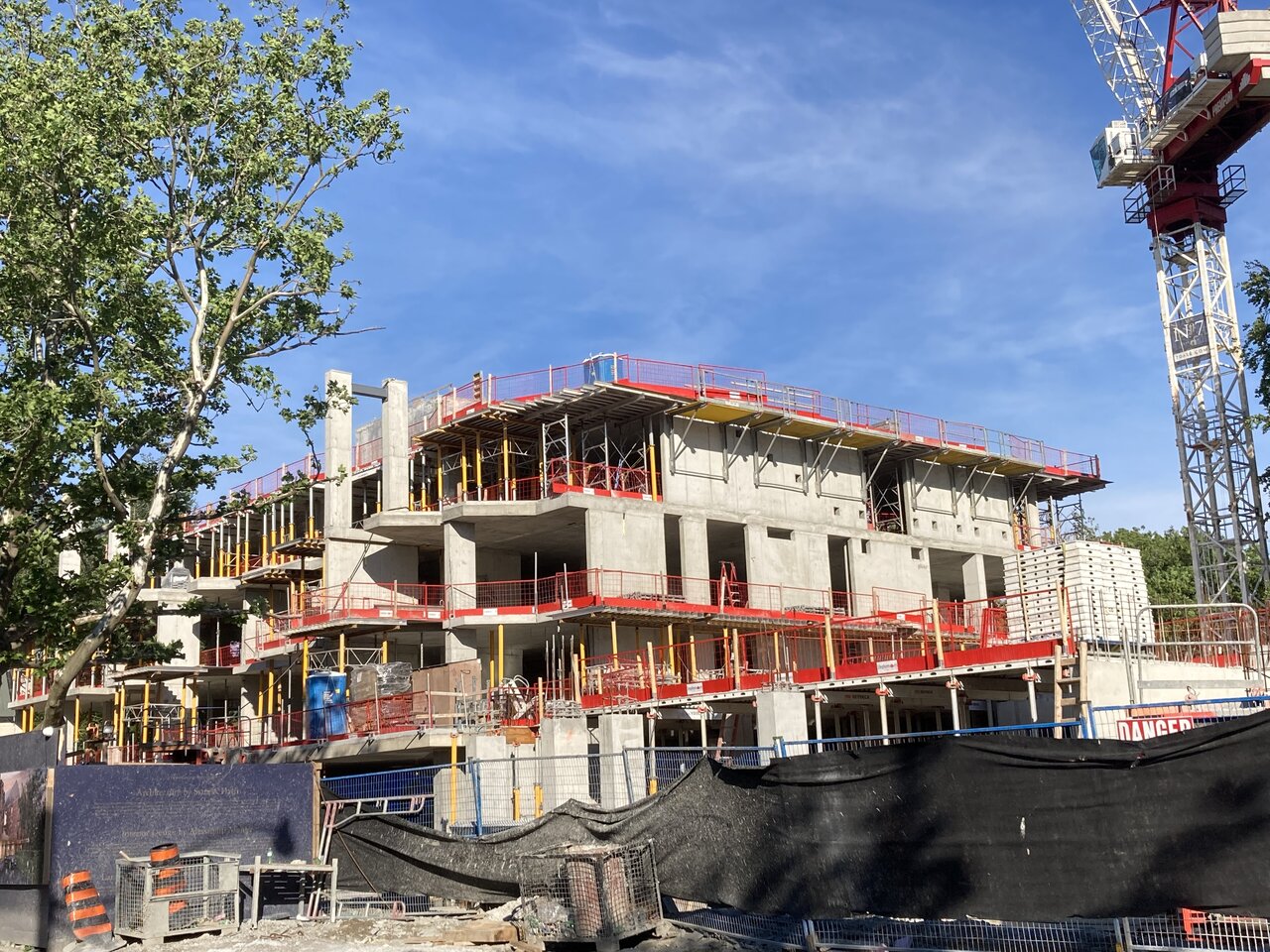 Demolition permits for houses on the site were also contested by locals, but granted in late 2019, and demolition cleared the site early in 2020. With the early stages of construction following throughout the year, we last checked in on the site in November when a crane had been installed and the first of two underground levels had begun to take shape at the base of the site’s excavated pit. By the end of 2020, formwork was in place for the ground-floor slab, marking the beginning of the complex’s four-level ascent. 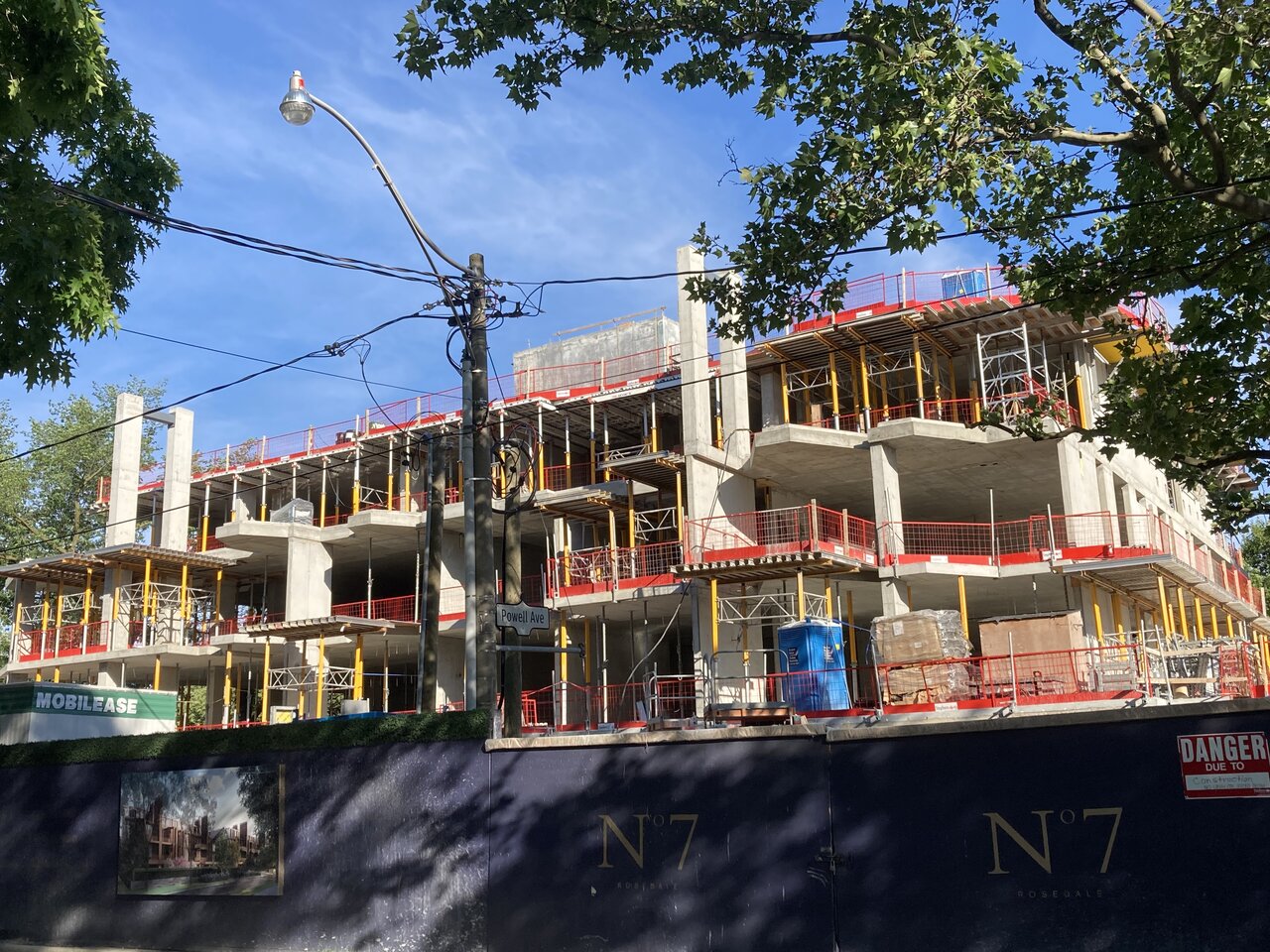 While the complex’s height is of no consequence on a city-wide scale (the concerns of locals notwithstanding), No7 Rosedale is notable for its design. A major departure from typical Toronto condo architecture, the building manages to acknowledge the neighbourhood context in scale and materiality, while applying Rosedale’s mansion qualities to  the townhouse form in a rhythmic way. 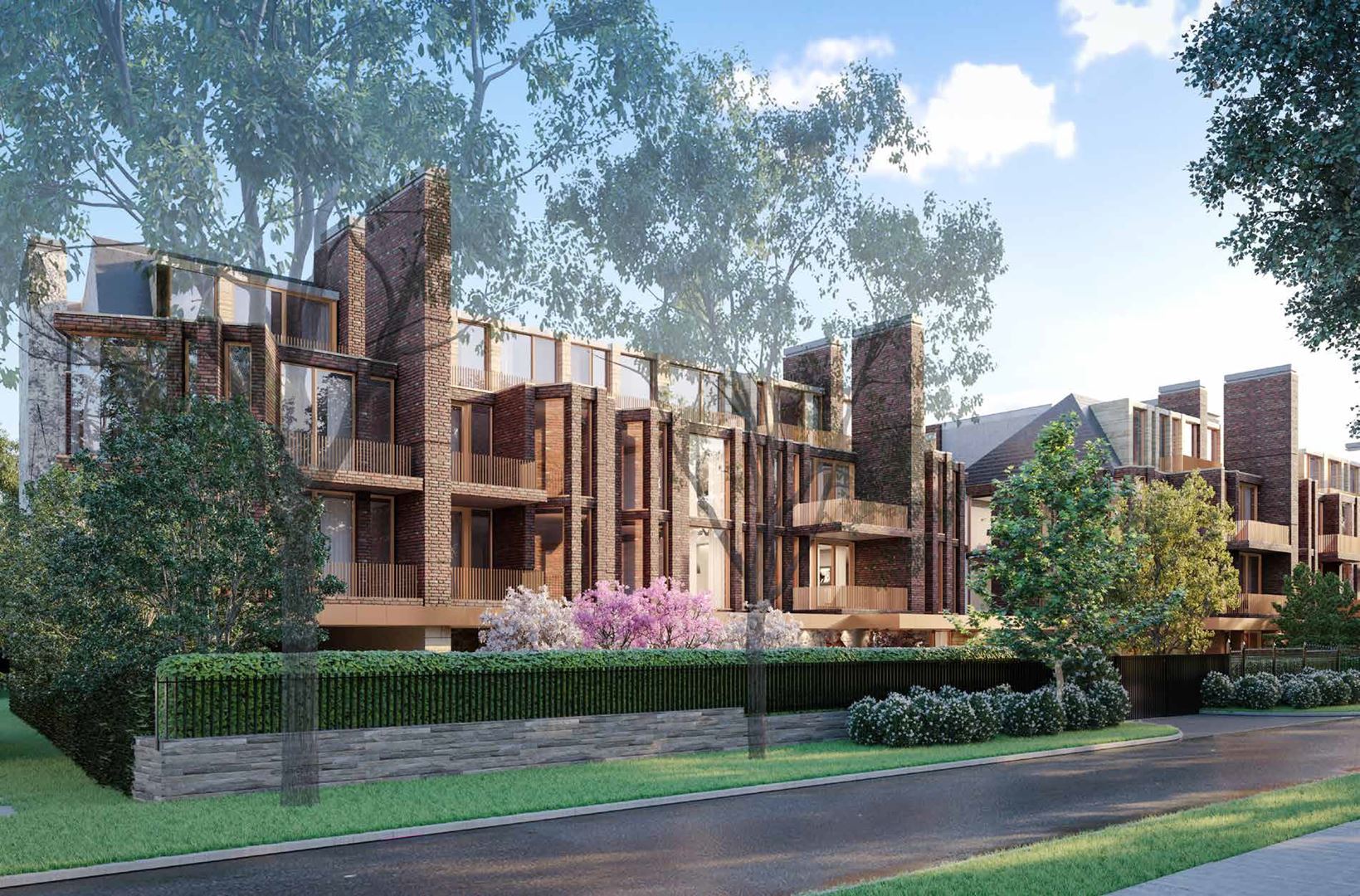 Looking southwest to No7 Rosedale, image by Hariri Pontarini Architects for Platinum Vista

With the complex’s east block now approaching its final height, the project’s architectural contribution to the area is becoming clearer. Among the unique forms are a series of privacy walls that project high above the building frontages, an artful exaggeration of their function. Concrete supports for the privacy walls now appear in advance of the brick finishes that will serve as the primary exterior expression for the project, in conjunction with its expansive glazing. 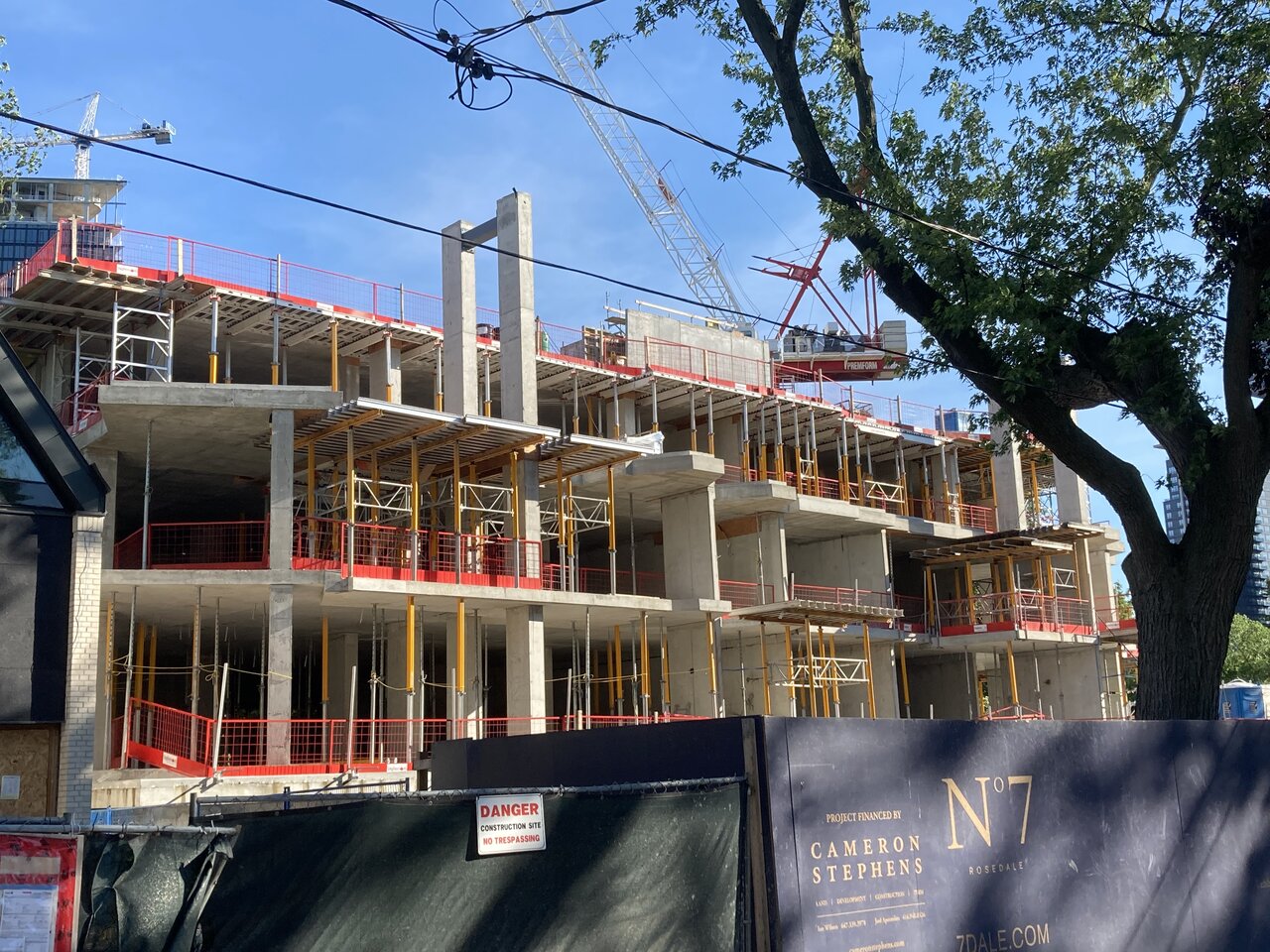 Like the homes of the surrounding neighbourhood, No7 Rosedale’s suites have been designed to cater to the city’s wealthier households, introducing just 26 luxury condominium units to one of Canada’s most sought-after areas. 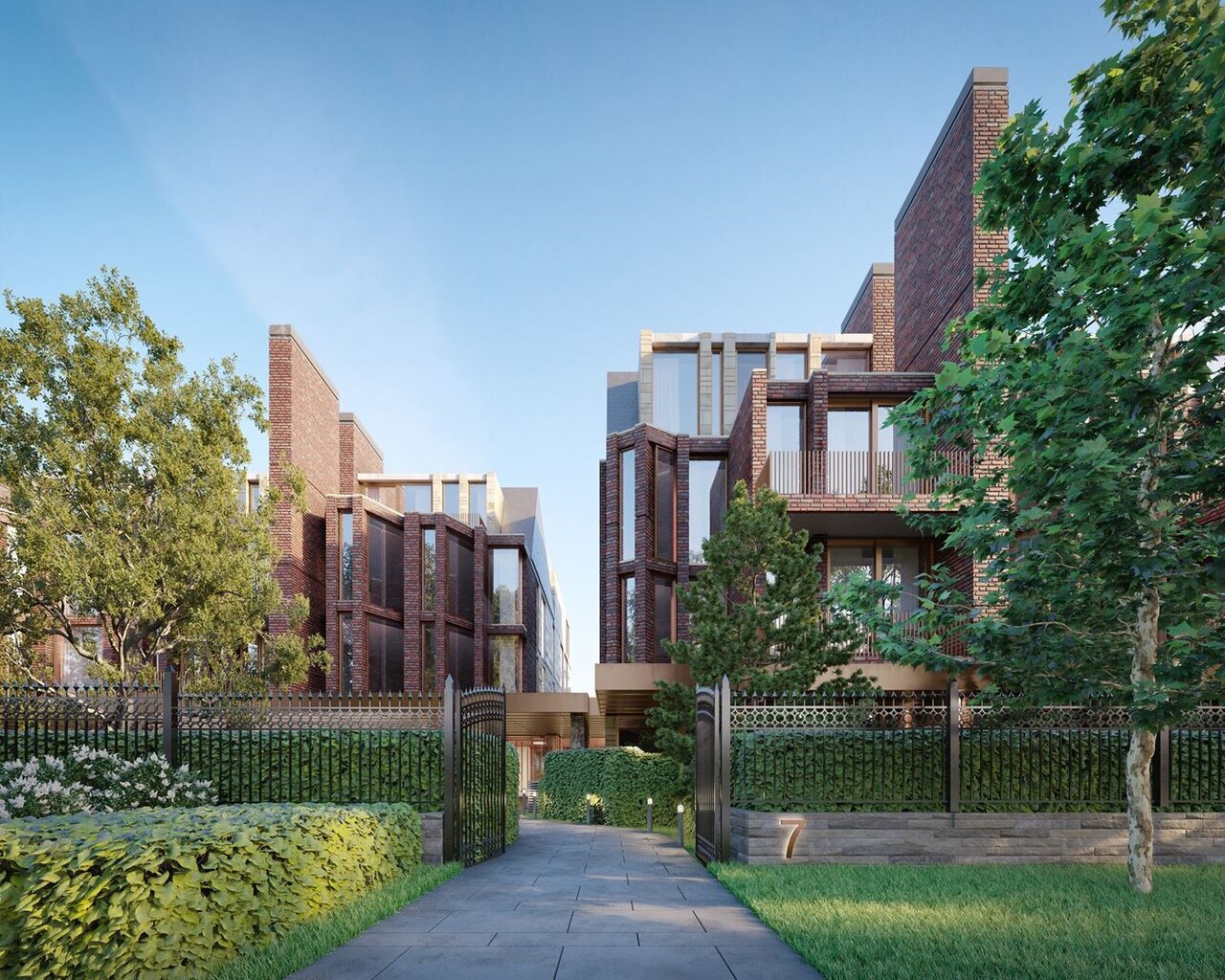 Looking south to No7 Rosedale, image by Hariri Pontarini Architects for Platinum Vista