Construction is underway on a development that will fill in one of Downtown Toronto’s last remaining surface parking lots. In its place will rise three new buildings—two 13-storey towers and one 12-storey tower—designed by Copenhagen-based COBE Architects in partnership with Toronto-based architects—Alliance. 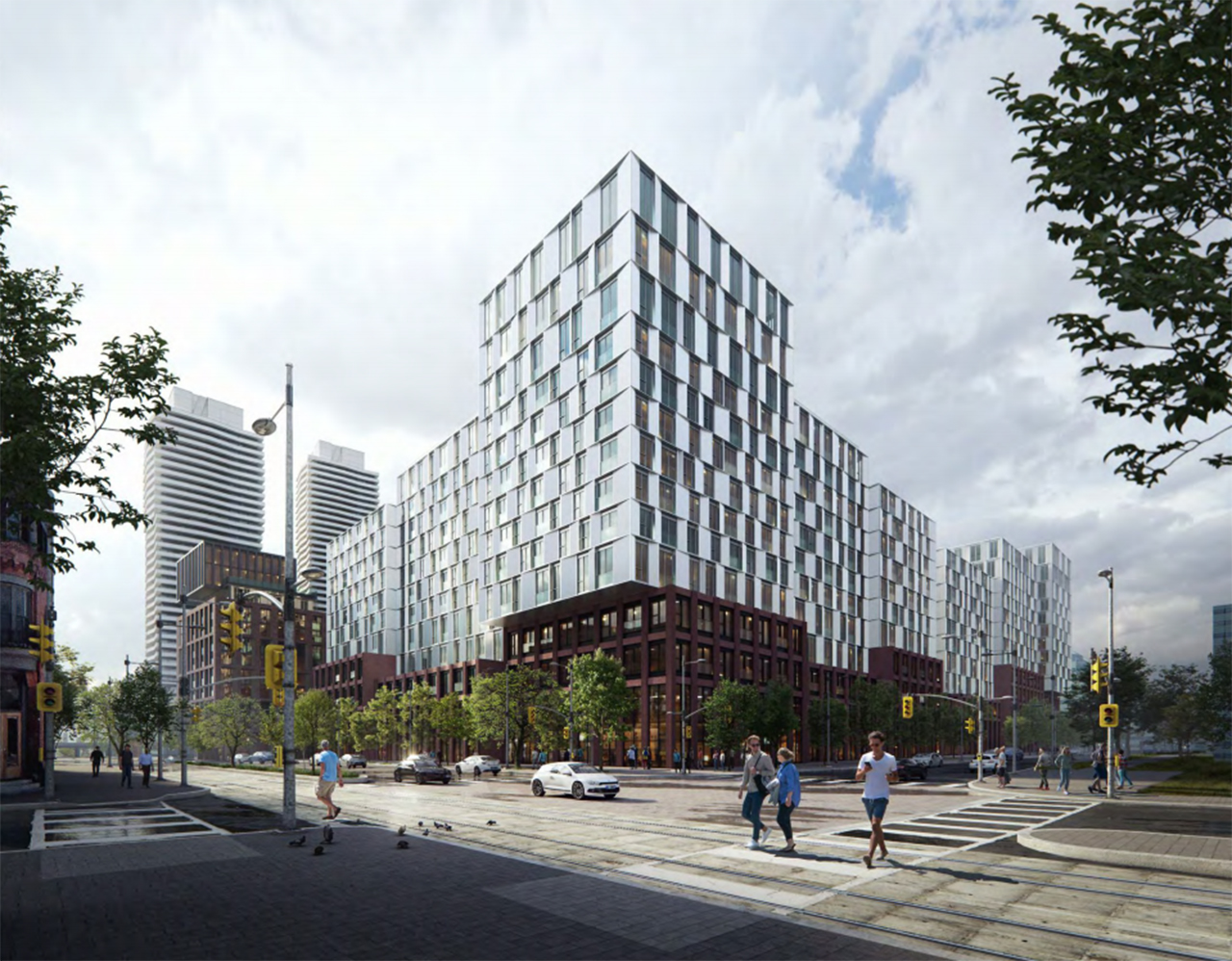 Looking southwest from the intersection of Cherry Street and Front Street, image via submission to the City of Toronto

The project, being jointly developed by Dream Unlimited, Kilmer Group, and Tricon Residential, will bring 855 new rental units to the neighbourhood. 257 of those units will be affordable, in accordance with the terms of a 99-year lease agreement with the provincial government—a slight step up from the 252 affordable units in a previous plan. 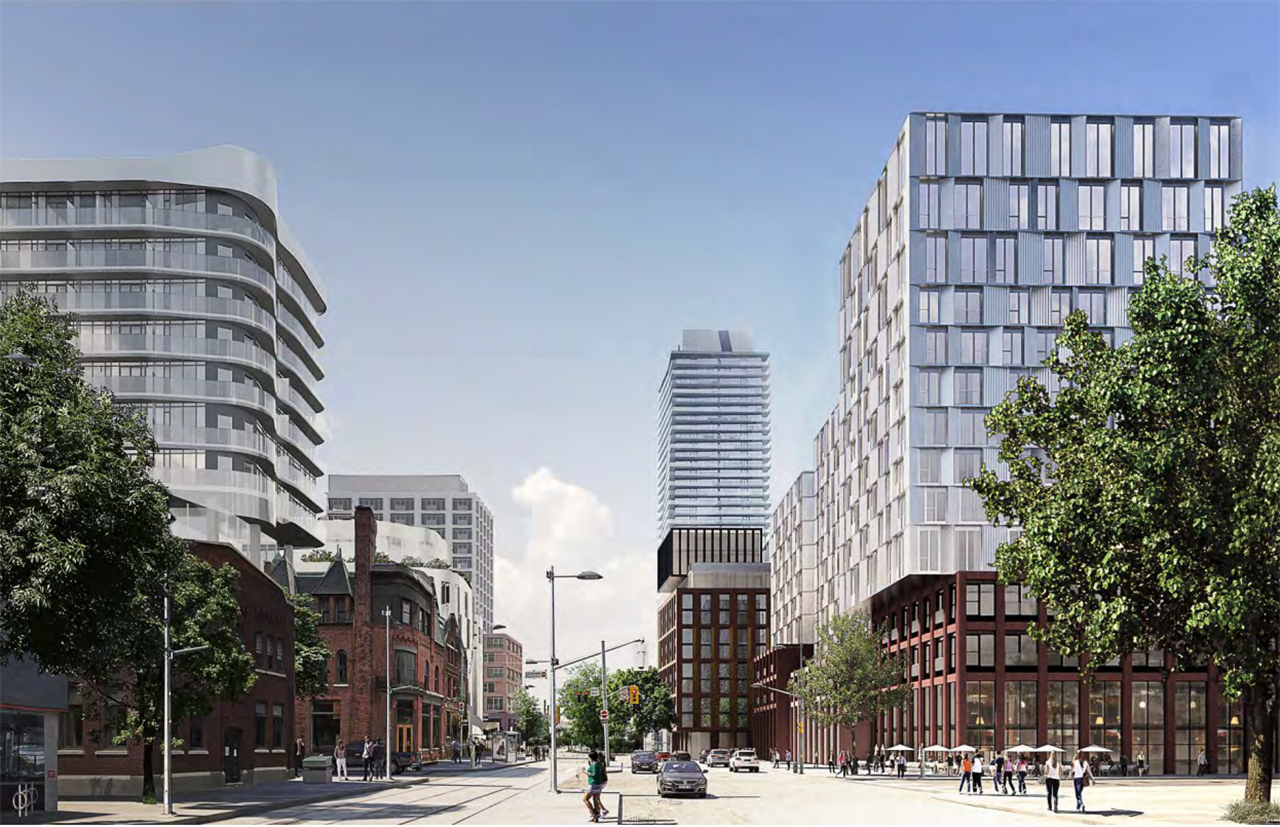 Looking south on Cherry Street, with Block 4 and 7 on the right-hand side, image via submission to the City of Toronto

The site is large at over 15,000 m², occupying an entire new block, and including a publicly accessible courtyard. With such a significant public presence, quality materials will be essential to the project’s success. Documents recently submitted to the City hint at what to expect in this department; podium buildings in Blocks 3 and 4 will be clad primarily in red, fluted precast concrete, in a variety of finishes. Window mullions at these levels will be coloured in shades of “dark copper” and “dark wood,” a welcome change from ubiquitous Toronto-grey. The towers above will be panelled in bright silver metal. 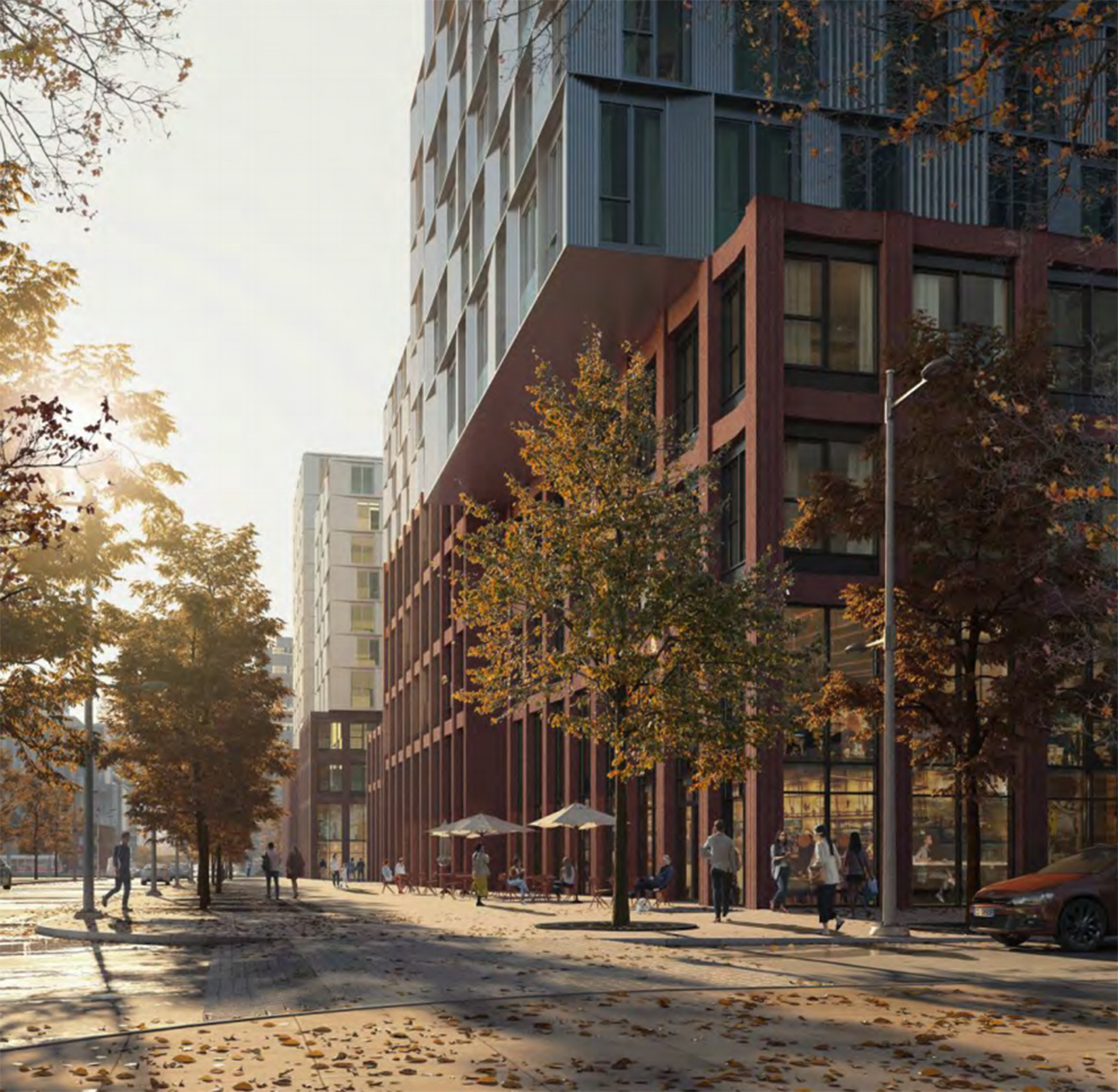 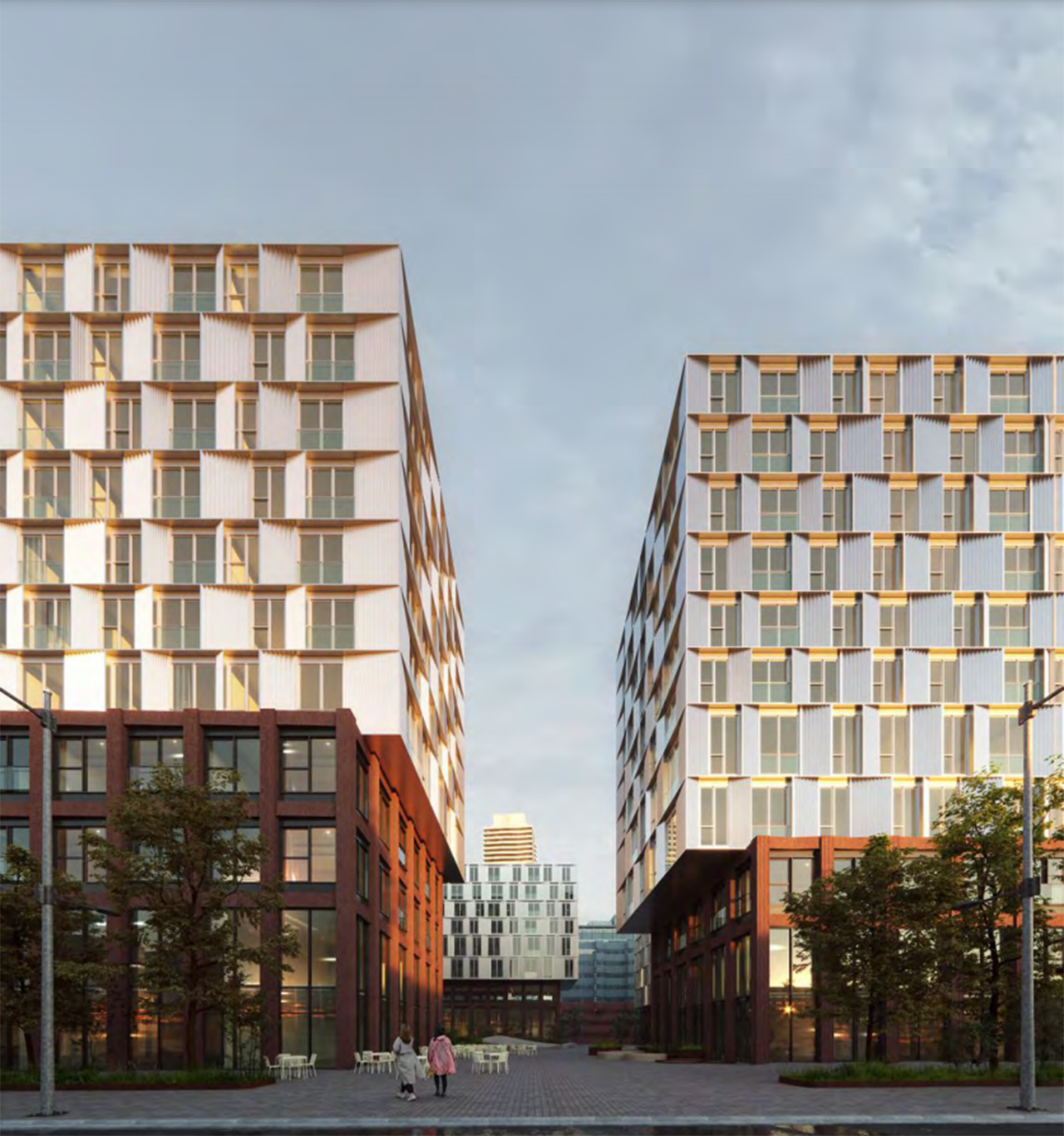 Rendering looking south from Front Street through publicly-accessible courtyard, image via submission to the City of Toronto

Just south across a newly created street, at the corner of Mill and Cherry streets, Block 7 will feature red brick-faced precast panels with dark window mullions. 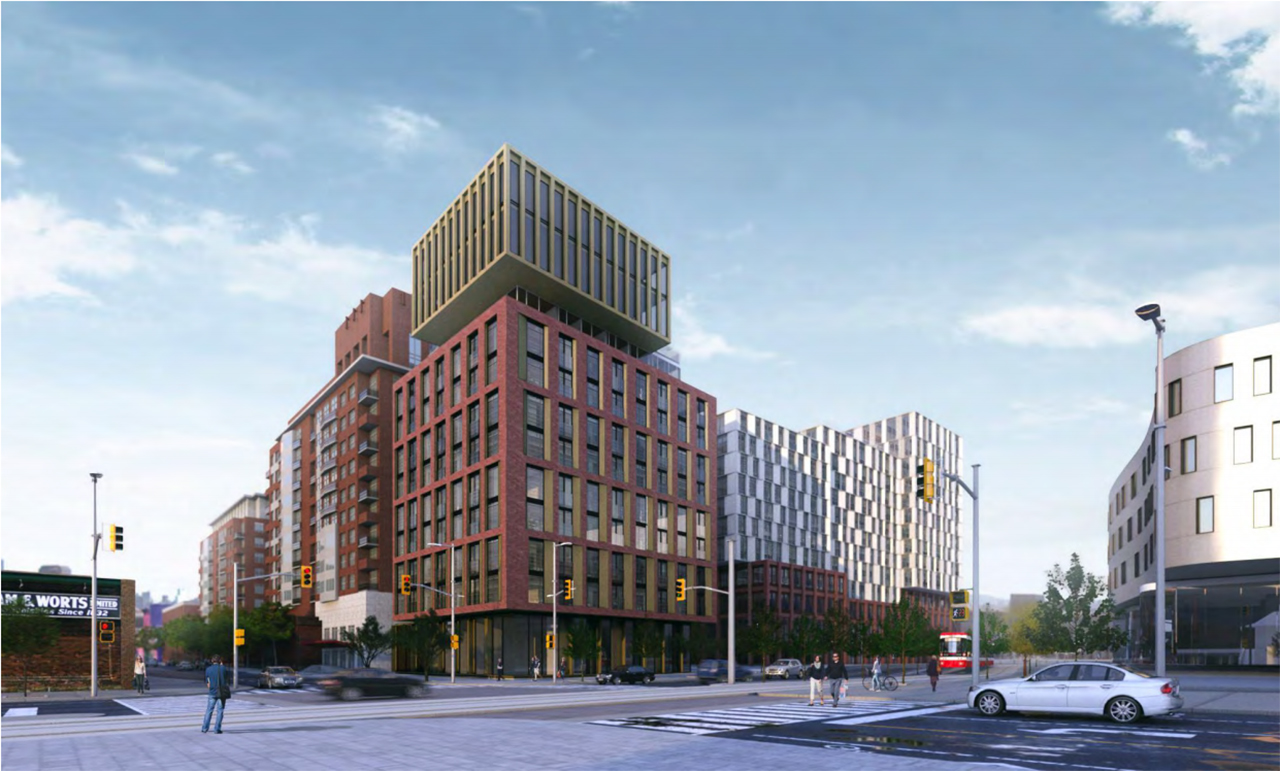 Looking northwest from the corner of Cherry Street and Mill Street, showing Block 7 in the foreground, image via submission to the City of Toronto

Since our last update, the pending Zoning By-law Amendment application to the City has been superseded by a Minister’s Zoning Order (MZO), issued in October, 2020. This zoning order formalizes the terms of that 99-year lease agreement and provides for maximum floor area, building height, housing type mix, and size of pedestrian walkways among other things. An MZO exists outside of the City’s planning process and cannot be appealed to the LPAT; it is therefore a controversial tool among those who support more transparent planning at the local and municipal levels. 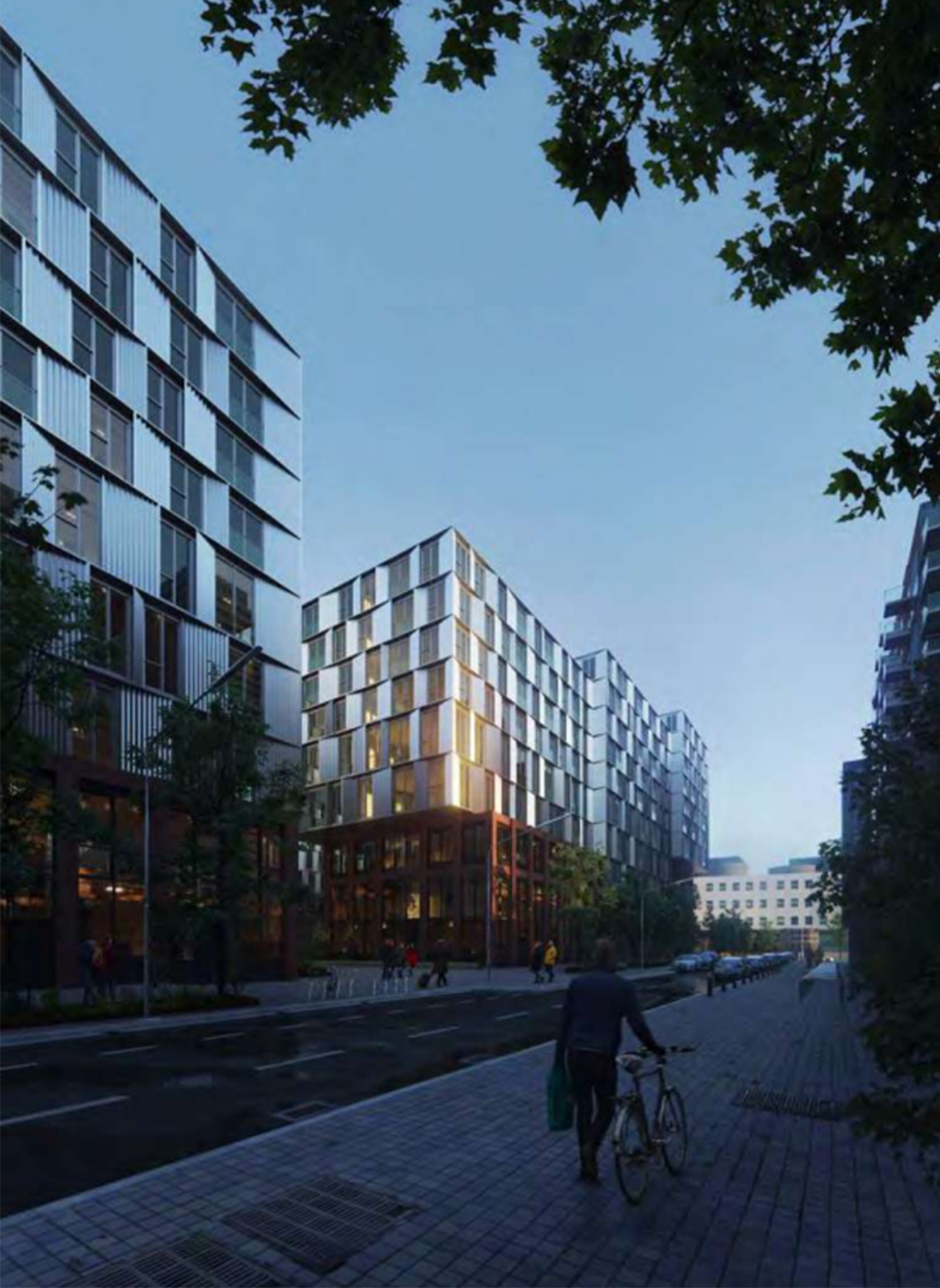 Looking east along newly-created street, image via submission to the City of Toronto

Despite this unexpected procedural development, the project remains substantively unaltered, with only minor changes. Among these, the number of vehicular parking spaces has increased from 293 to 300, and retail gross floor area (GFA) has increased from 3,080 m² to 3,510 m².

The plan also retains its large, publicly accessible courtyard. New drawings give us a better idea of how the Public Work-designed landscape plan uses plantings to mediate between private and public uses. 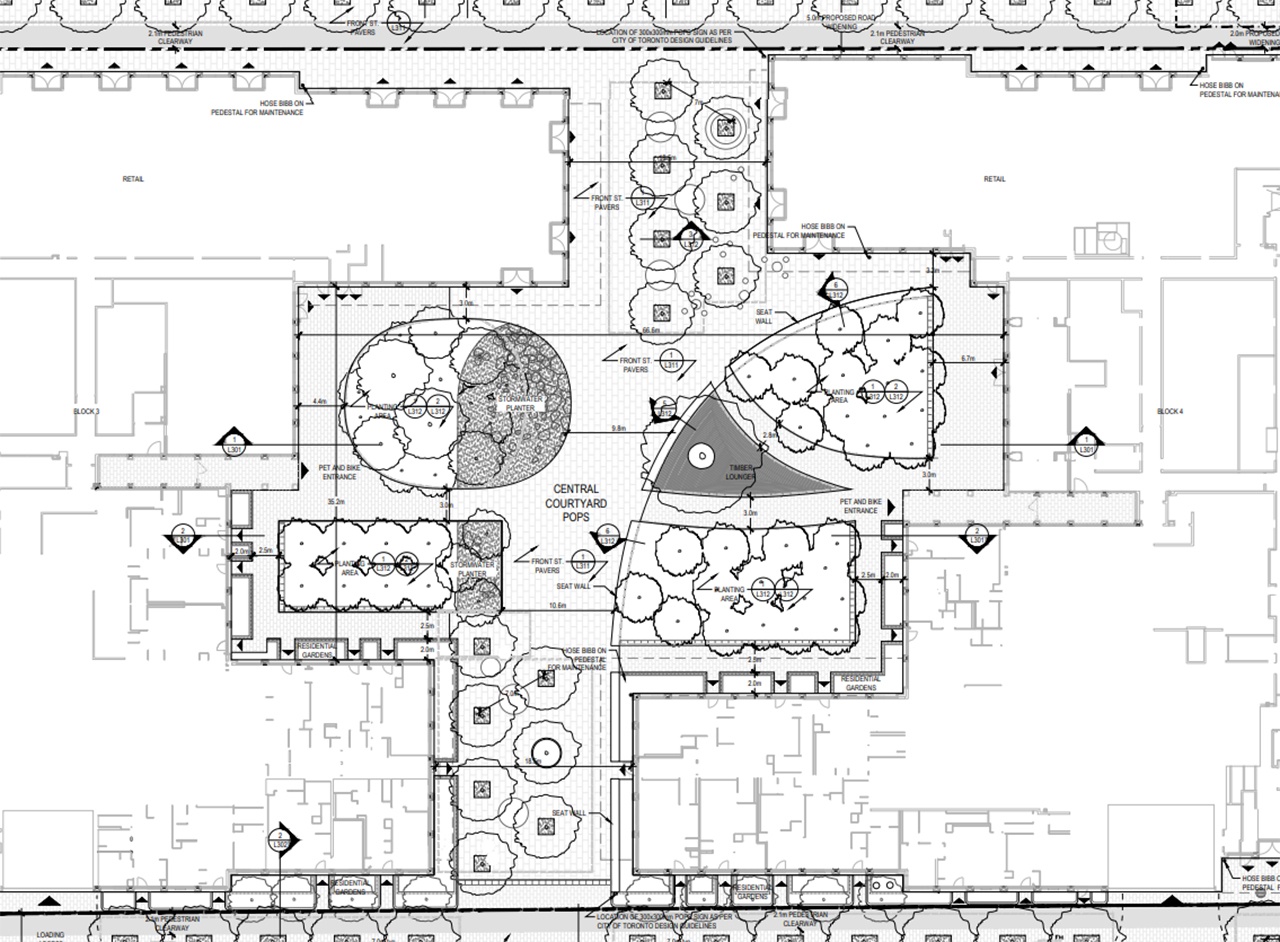 Landscape plan drawing, showing how planting mediates between private and public uses within the courtyard, image via submission to the City of Toronto 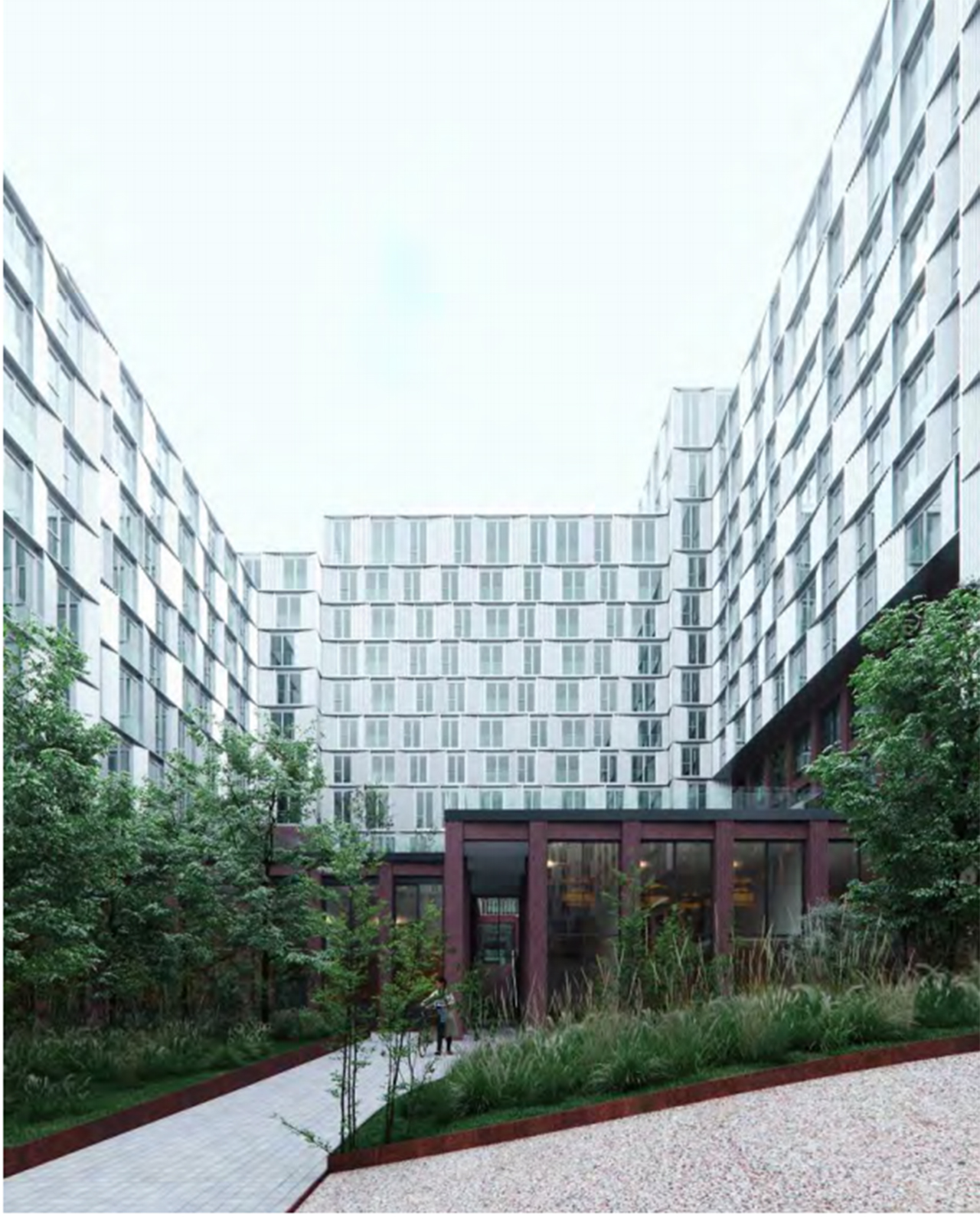 Publicly-accessible courtyard, with private entranceways mediated by plantings, image via submission to the City of Toronto

The existing parking lot shut its “doors” in January, 2021 and shoring began in May. With only one level of below-ground parking, this stage of construction should not take long. EllisDon, construction managers on the project, anticipate approximately 50 months to completion. That timeline would see all three buildings finished by 2025. 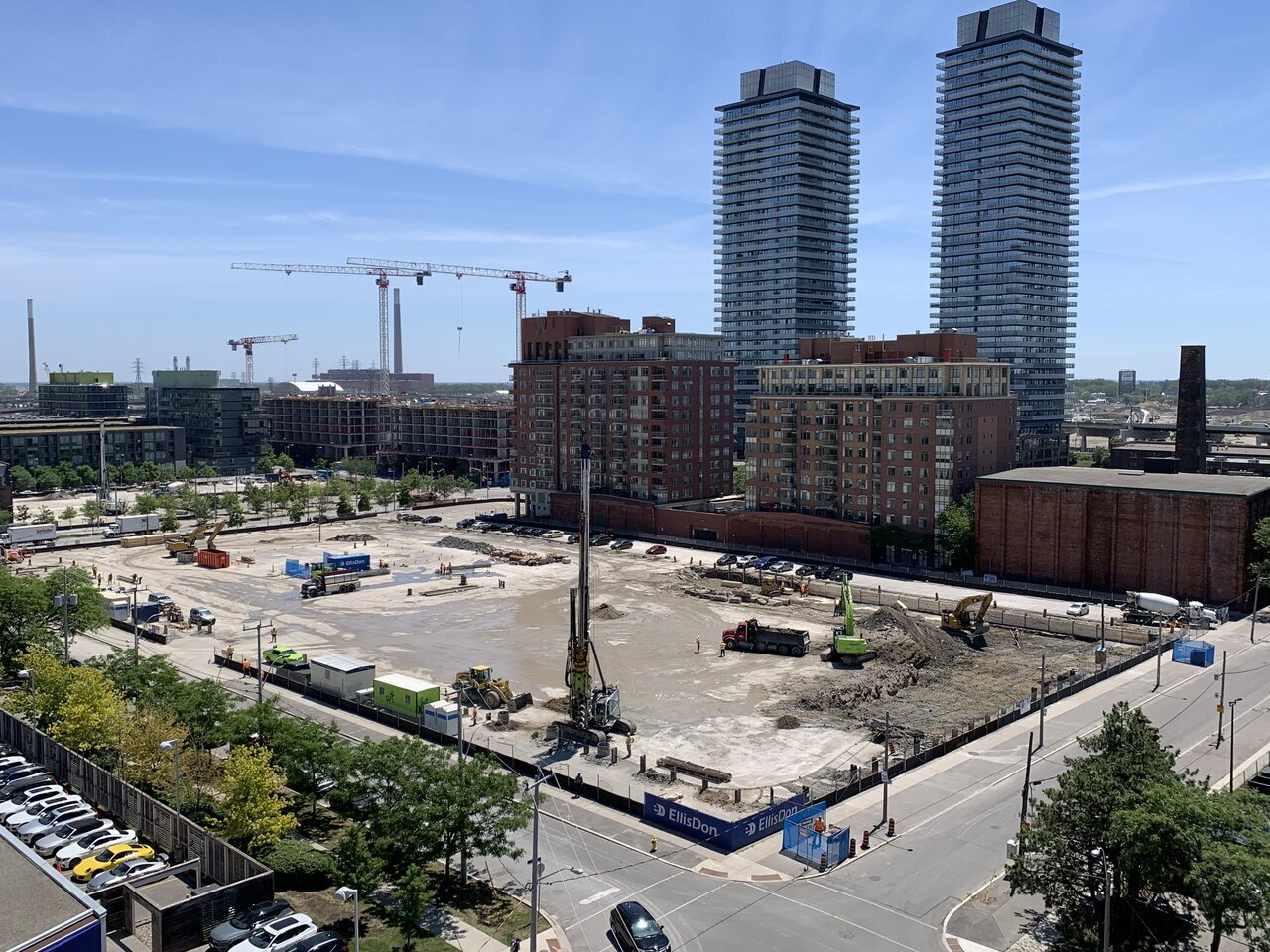 Shoring equipment on the site in June 2020, image by UT Forum contributor timothe.dubois 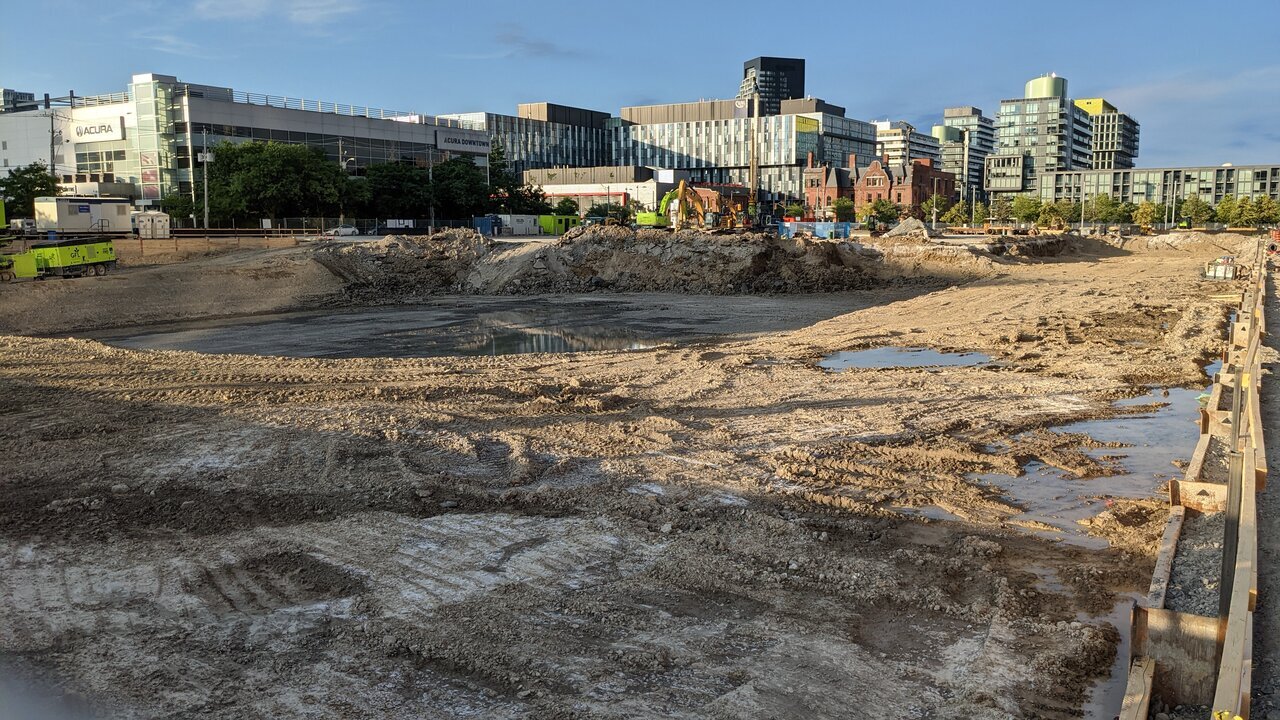 With only one level of below-ground parking, this stage of construction should not take long, image by UT Forum contributor achender