It has been a number of years since the Globe and Mail Centre first graced the skyline of the King-Parliament neighbourhood, and it may soon be joined by two other towers; First Gulf is moving ahead with the next phases of their redevelopment of the former Toronto Sun building, now referred to as the King East Centre, which occupies one full block bounded by King Street, Berkeley Street, Front Street, and Princess Street. Joining the existing Globe and Mail Centre tower on the block will be a 27-storey office tower and 39-storey residential tower, both designed by WZMH Architects. 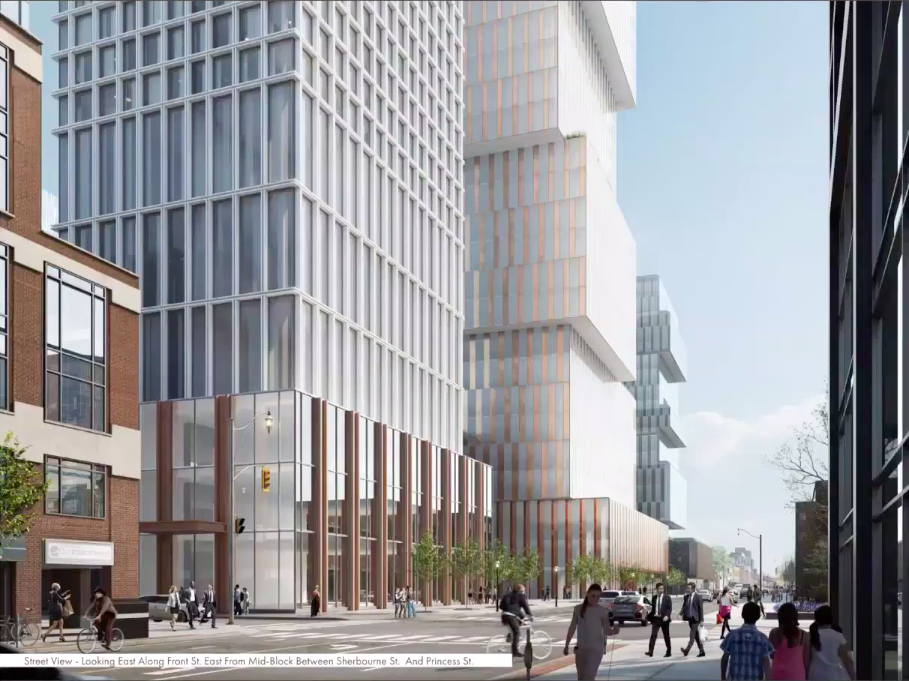 Rendering looking east along Front Street, image via submission to the City of Toronto.

An updated rezoning application was first submitted in 2018, which only contained plans for the single office tower, though the third residential tower was always part of First Gulf’s future plans for the site. It made its first appearance at the Toronto Design Review Panel (DRP) in 2019 and received some negative critiques, with the Panel strongly suggesting that a full block plan be presented to ensure a successful redevelopment of the site. First Gulf then resubmitted their rezoning package in 2020 showing both new towers, and have since tweaked the design of the proposal, presenting it for a second time to the DRP in June, 2021.

Comparison of previous 2018 version (left) with current 2021 version (right), image via submission to the City of Toronto.

The updated proposal refined the massing of the two towers, increasing their heights by two storeys each from the 2020 submission, and ensuring that the new towers achieved a minimum of 25 metres separation distance between each other. The number of residential units decreased slightly to 310, while the GFA increased by roughly 10,000 m², including over 63,900 m² of office space and over 6,140 m² of retail. 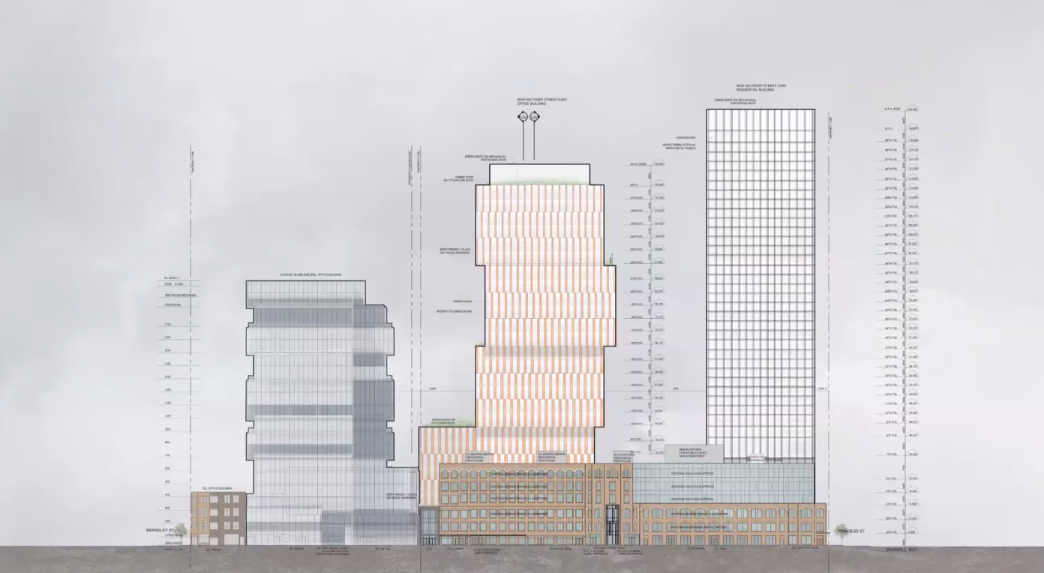 North elevation, image via submission to the City of Toronto.

The new towers would replace the existing surface parking lot and retail units on Front Street along the south edge of the site, which currently include a No Frills, a Dollarama, an LCBO, and a CIBC branch. The existing office building fronting onto King would remain largely untouched, with the existing tenants remaining in the building. 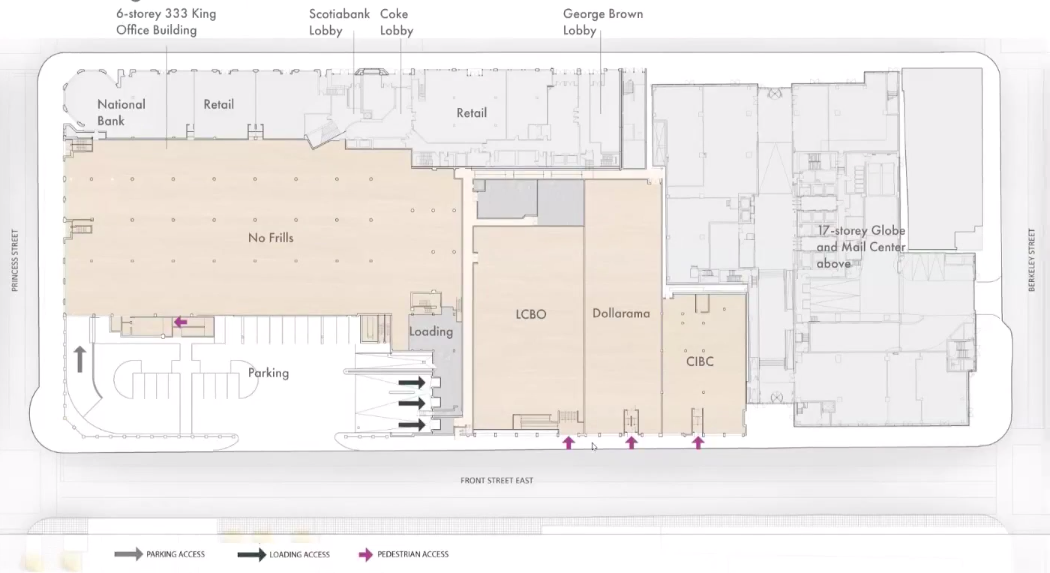 Existing ground floor plan, image via submission to the City of Toronto. 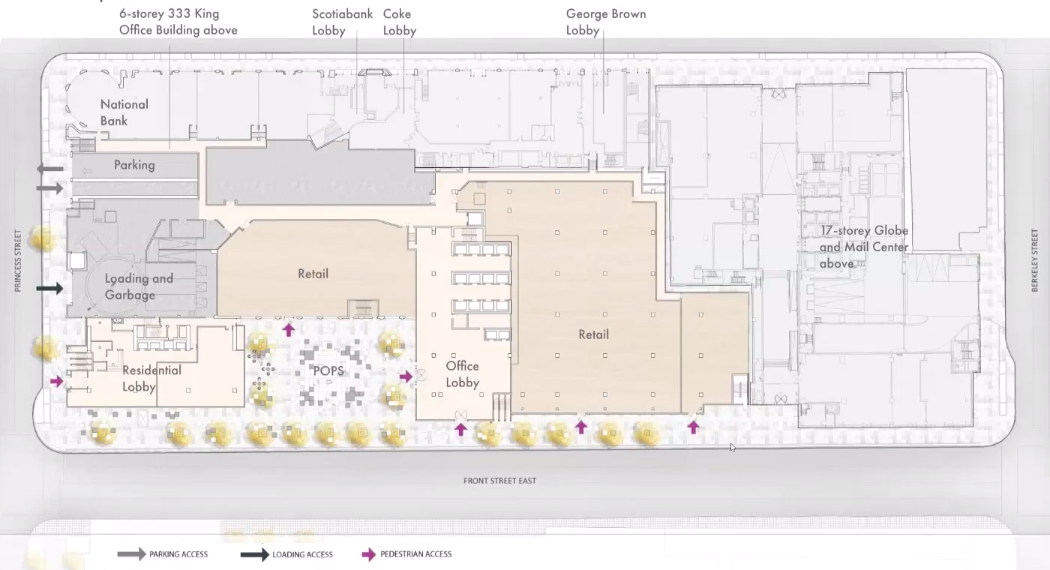 Proposed ground floor plan, image via submission to the City of Toronto.

The redevelopment includes a new 1,200 m² POPS along Front Street, sandwiched between the residential and office tower lobbies. As a result, parking and loading access is being moved from its current location off of Front Street over to Princess Street, and will occupy much of the space that currently houses No Frills. (While significant amount of retail space is being provided in the new development—20,000 ft² facing King Street, 9,500 ft² facing the POPS, and 6,860 ft² of Back-of-House support space—those spaces are not as large as the current No Frills space, and it is unknown which retailers may return.) 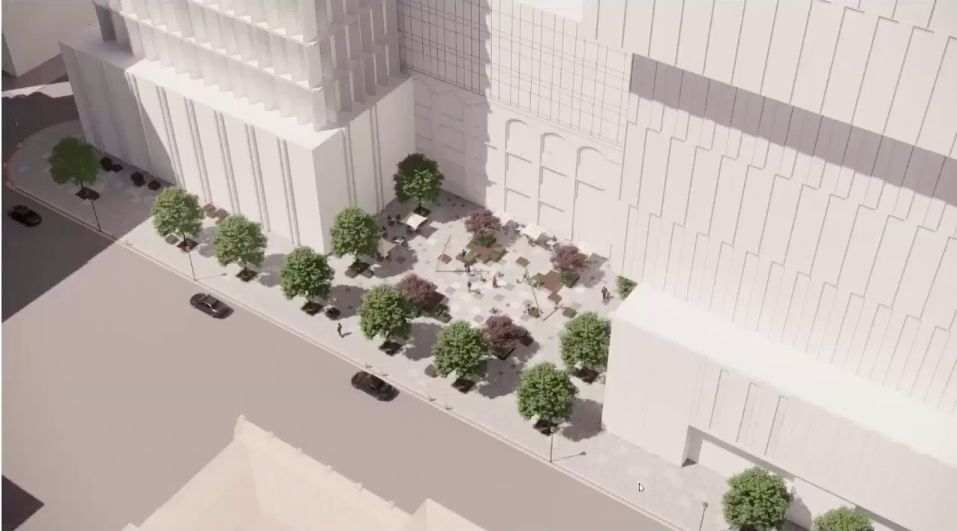 Aerial rendering of the proposed POPS, image via submission to the City of Toronto.

The architecture of the buildings is still very schematic given that the development is in the rezoning process, but the design team has made several moves that they intend to continue through design development. They established a strong datum line that continues the height and expression of the podiums along Front, such that the base of both the office and residential towers will align with that of the Globe and Mail Centre, and the language of the vertical terracotta fins will be continued onto the new buildings. 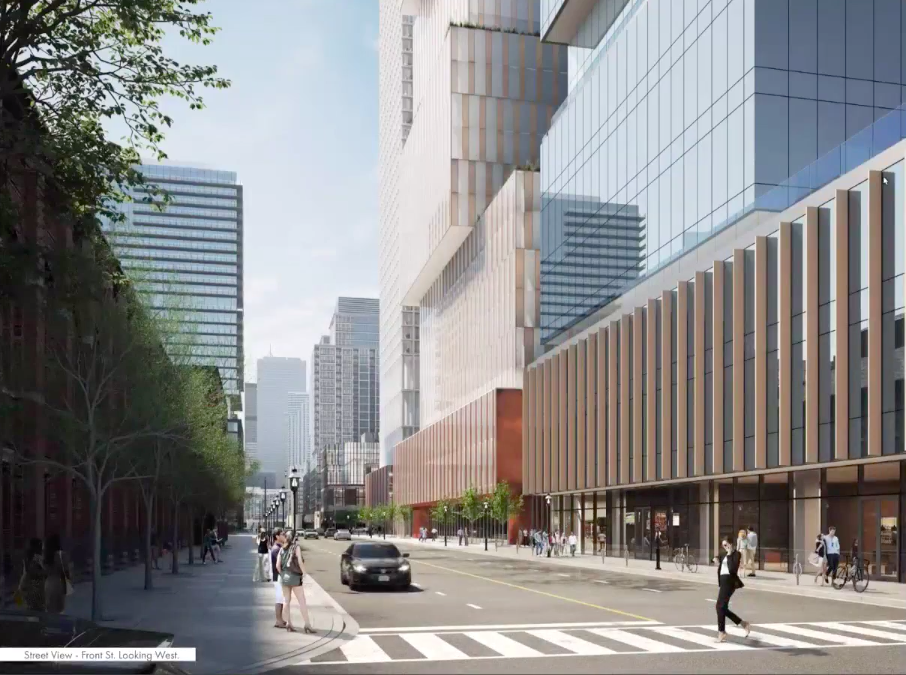 Rendering looking west along Front Street, image via submission to the City of Toronto.

On the upper tower portions, the office tower takes on an aesthetic of staggered, stacked boxes, which according to the design team was a result of responding to the very tight site constraints as well as the desire to provide several rooftop terraces, which has resulted in a compatible massing with the neighbouring Globe and Mail Centre. The residential tower features a regular grid of recessed glazing, which may or may not include balconies once that building progresses to detailed design. Regardless, the language of the grid would remain. 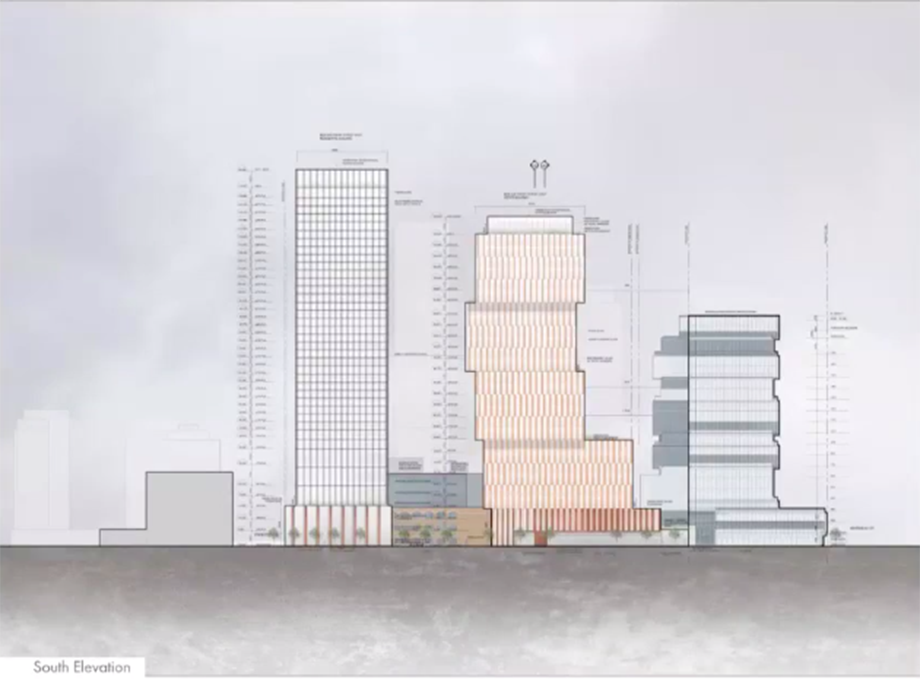 South elevation, image via submission to the City of Toronto.

The Panel was very pleased with the revised proposal, saying that this iteration showed a “significant improvement” over the previous single-tower version in terms of massing, public realm, and overall compatibility and sensitivity with its surroundings. They felt that the building heights, massing, and placement on the site were all appropriate, and they appreciated the effort from the design team to work within the difficult constraints. 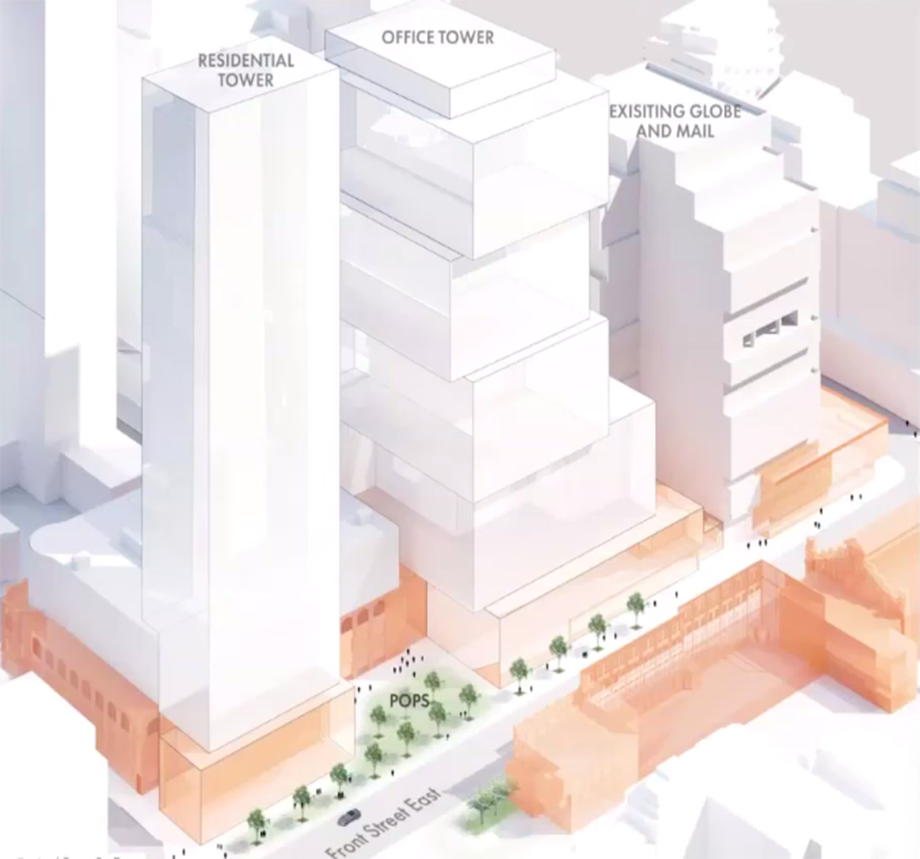 Massing diagram along Front Street, image via submission to the City of Toronto.

While Panel members were definitely excited about the inclusion of a POPS, they felt that it simply wasn’t large enough to accommodate the thousands of employees and residents that will eventually make use of it. They encouraged the design team to explore either enlarging it further or seeing if they could fit a second POPS between the office tower and Globe and Mail Centre. They also suggested that the proponents could utilize the roof terraces as added public space for the towers’ occupants, and that perhaps they could enlarge them or even include more terraces throughout as a way to supplement the lack of available space at ground level. 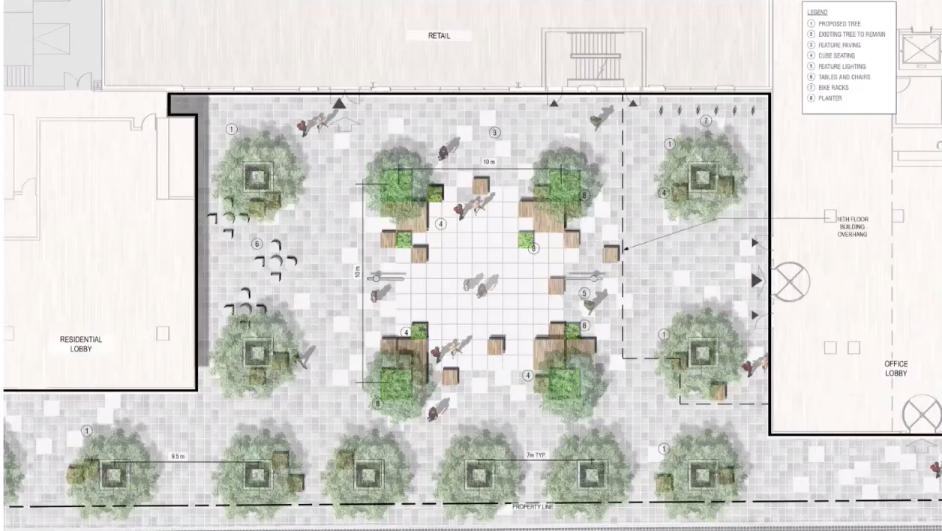 Proposed POPS plan, image via submission to the City of Toronto.

They also criticized the design of the POPS itself, saying that as currently shown, it would not perform for the residents, employees, visitors, children, or even dogs that will be using it. The Panel pushed for more trees, planted areas, and green space in the POPS and along the streetscape, noting that there was a lack of such in the immediate area. They urged the design team to take a closer look at designing a more usable public realm. 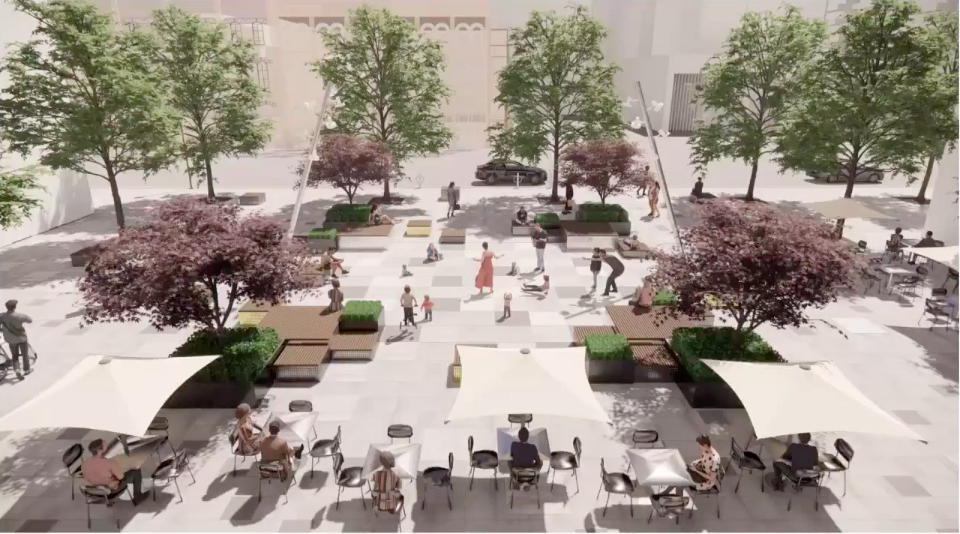 Rendering of the proposed POPS, image via submission to the City of Toronto.

Relationship to surrounding context and heritage were also common themes in the Panel commentary. The property is located on two of the original 10 blocks of the Town of York, the first colonial settlement that would eventually grow into the City of Toronto, though no heritage structures currently exist on the site.

The Panel thought that the continuous datum line along Front Street that corresponds to the podium of the Globe and Mail Centre was a positive feature of the project and worked well to establish a more welcoming streetwall, contrary to what exists there now. They did however urge the design team to explore an option for a mid-block connection between King Street and the POPS, mirroring the lobby of the Globe and Mail Centre that currently provides a connection between King and Front. They pointed out that the line of columns at the base of the office tower roughly aligns with Ontario Street on the north side of King, and could present an opportunity for a mid-block connection that reconnects the historic street grid and nods to the history of the original Town of York settlement. Rendering of the proposed POPS, image via submission to the City of Toronto.

Overall, the Panel was pleased with the revised proposal, and voted unanimously in support of it, on the condition that further investigation be carried out into expanding upon the public realm, including exploration of the aforementioned mid-block connection and second POPS.

We will keep you updated as the King East Centre continues to evolve, but in the meantime, you can tell us what you think by checking out the associated Forum thread, or by leaving a comment in the space provided below.