In late 2020, Republic Developments made a huge splash in the development scene with the unveiling of their Scarborough Junction Master Plan, a proposal to build a complete transit-oriented high-rise community directly adjacent the Scarborough GO Station. Teaming up with Harlo Capital and enlisting Giannone Petricone Associates as architects, Republic is proposing to transform the 26-acre site by adding a total of 6,619 residential units, 15,300 m² of retail space, and 4,500 m² of community space across 17 towers ranging in height from 12 to 48 storeys. 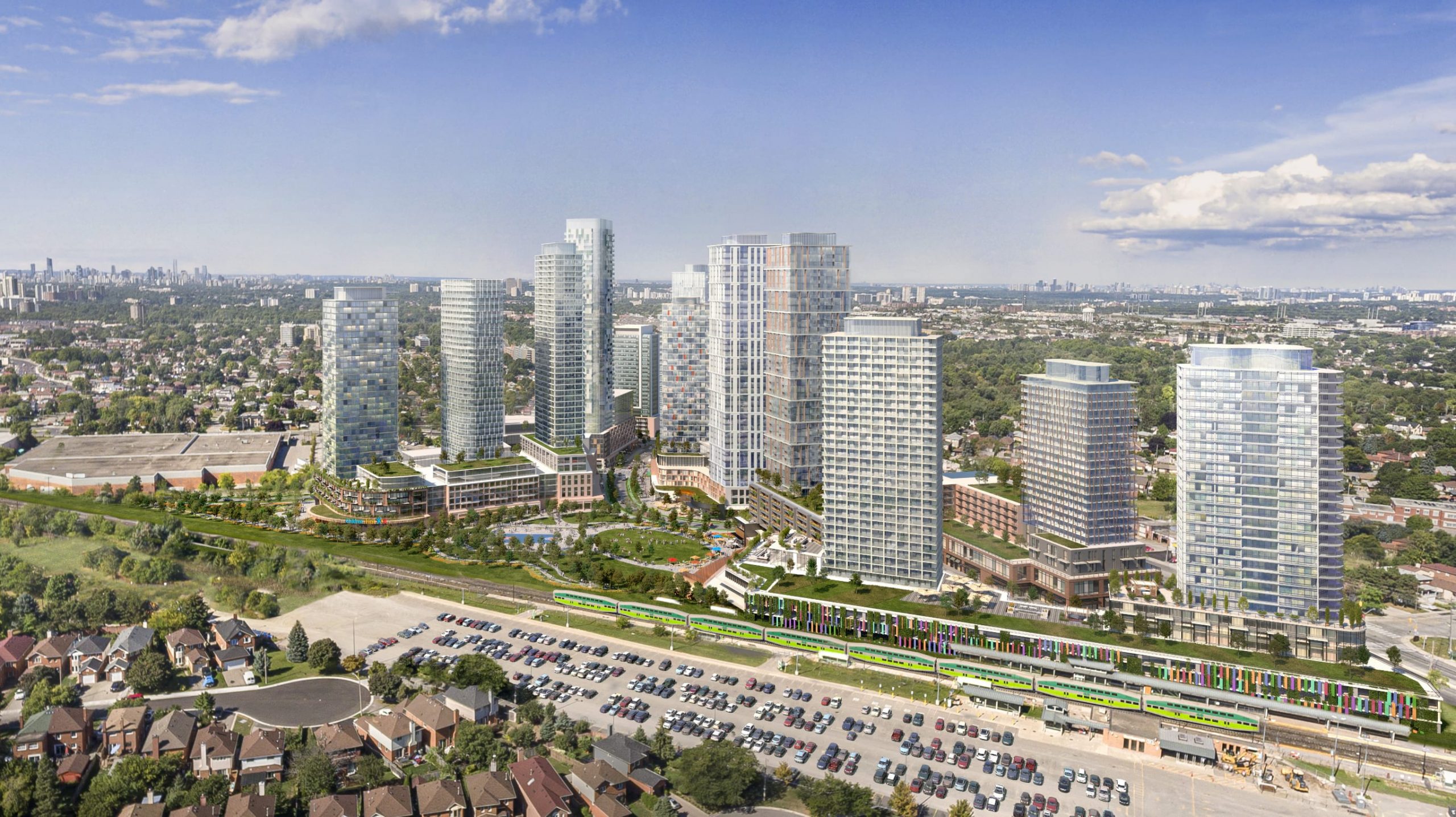 Rendering of Scarborough Junction, image via submission to the City of Toronto.

The triangular plot of land is roughly bordered by St Clair Avenue East to the north, Kennedy Road to the west, and the rail corridor to the south, with Republic owning the majority of land save for a handful of properties along Danforth Road and Kennedy. The southwest portion of the land is not included in this master plan, but is marked for future development. In total, the proposal includes 1.87 hectares of public parkland dedication, POPS (Privately Owned Publicly accessible Space), and open space, which also accounts for a required buffer along the rail corridor. A more detailed look at the development can be found here. 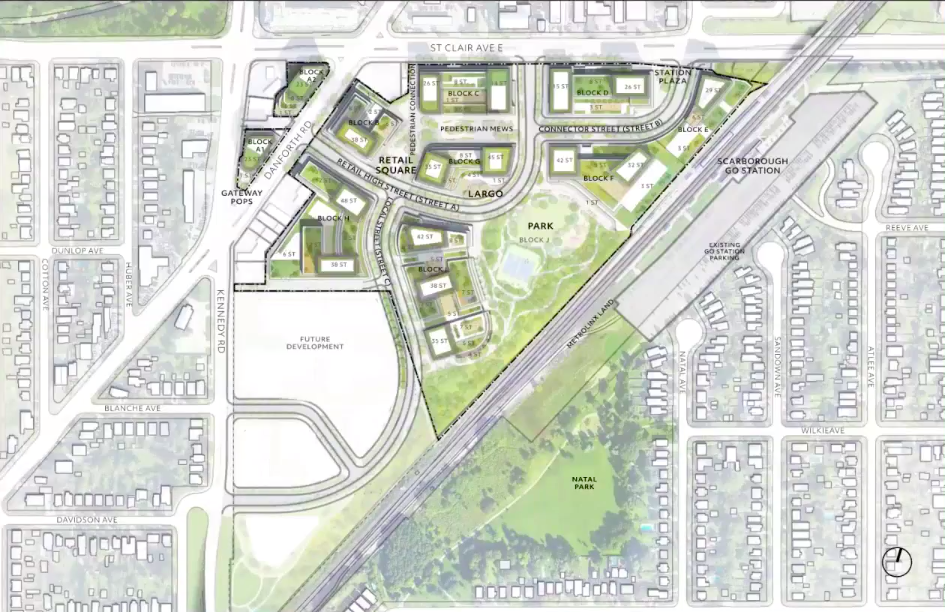 The master plan made its first appearance before the Toronto Design Review Panel in May, 2021 and received support from the Panelists, but they also provided some critiques on how to improve the master plan moving forward.

The Panel was pleasantly surprised by the somewhat unexpected proposal, applauding the proponents for discovering a rather forgotten site in the city that has huge development potential. Indeed, there are currently no high-density developments within close proximity to Scarborough GO station, so the Panel welcomed the master plan as a great initiative to capitalize on higher-order transit. 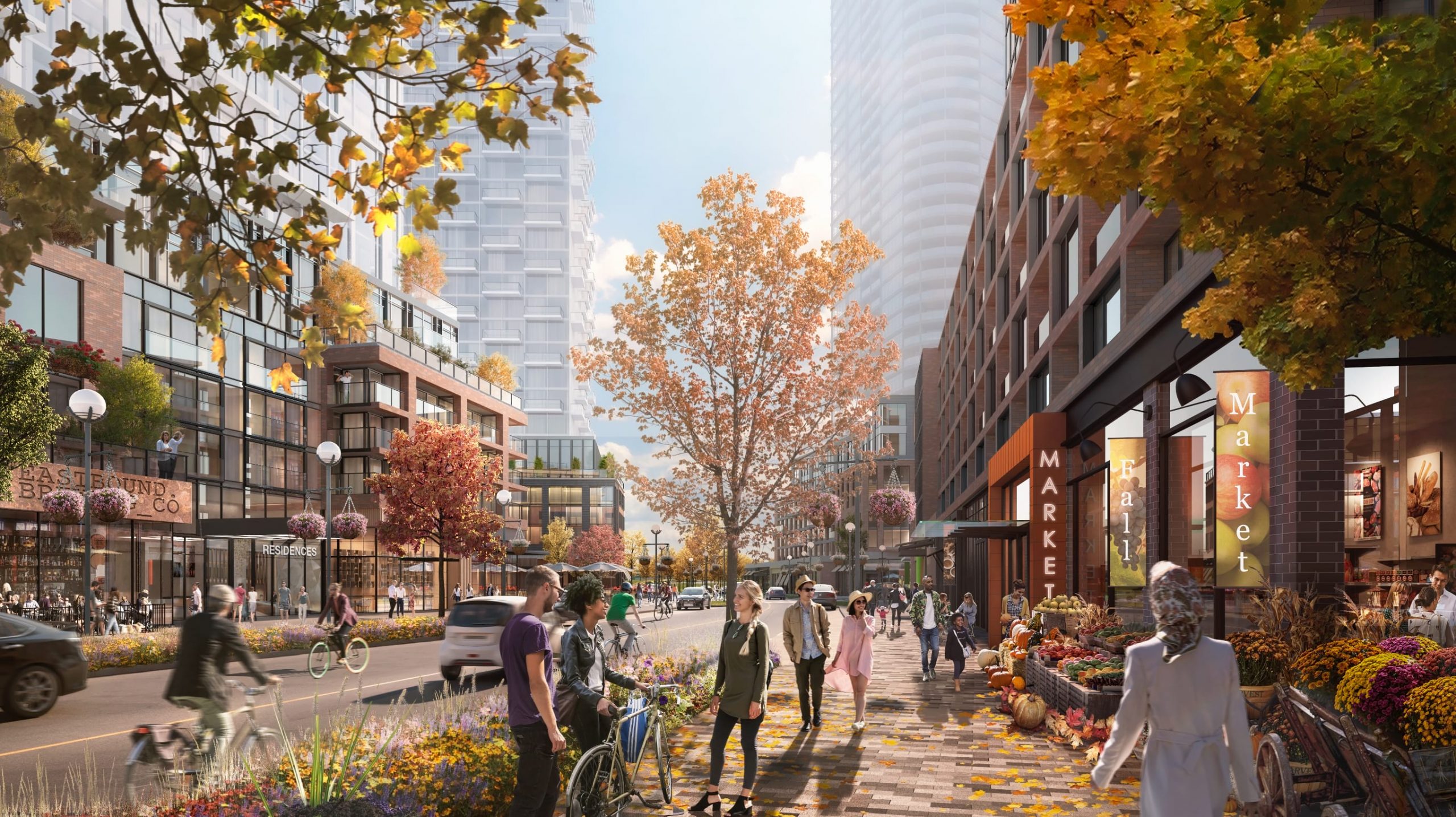 Rendering of the retail high street, image via submission to the City of Toronto.

Panel members approved of the overall structure of the master plan, but were a bit more critical when it came to the public realm. The proposal calls for a new public park, several smaller-scale POPS scattered throughout, and a new retail “high street”, aiming to provide a retail destination for the wider neighbourhood.

Several Panelists felt, however, that the public parkland dedication was simply too small. With over 6,600 residential units proposed, they were not convinced that what was included in the master plan was enough to provide adequate public space for the locals. Currently, the open space accounts for 21% of the total site area, which shrinks to roughly 16% when the required rail corridor buffer is not included. The Panel also suggested providing a pedestrian bridge over the rail corridor connecting to Natal Park on the south side of the tracks, as a way to connect the two parks while also providing easier access to the new retail for the neighbourhoods to the south. 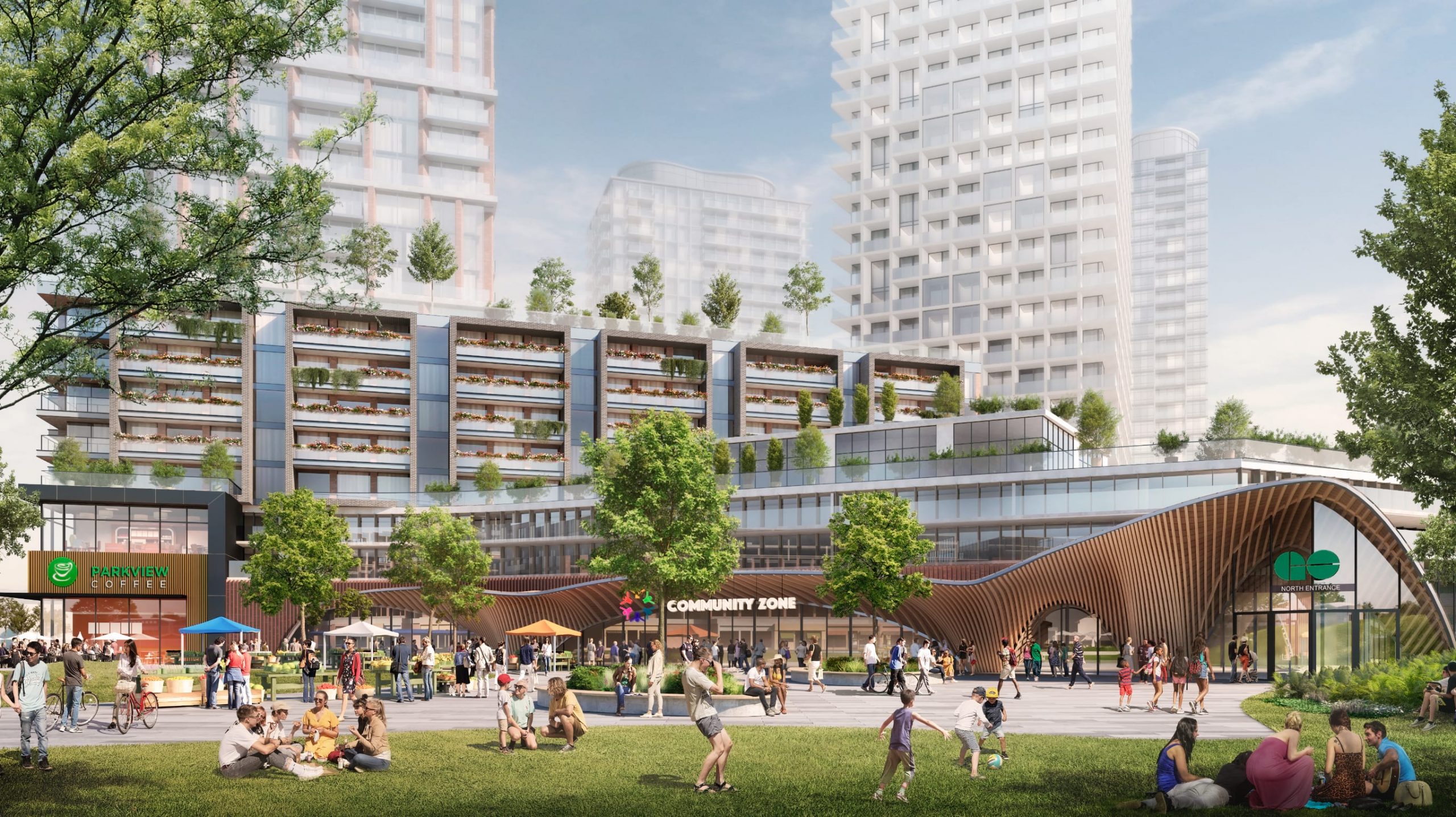 Rendering of the public park and community space, image via submission to the City of Toronto.

The nature of the public space was also criticized by the Panel, as they pointed out that much of the public realm was retail-oriented. They added that there is more retail square footage proposed than there is park space, which they called “really unfortunate.” The Panel urged the design team to include more public uses lining the streets and open spaces to create a richer pedestrian experience. 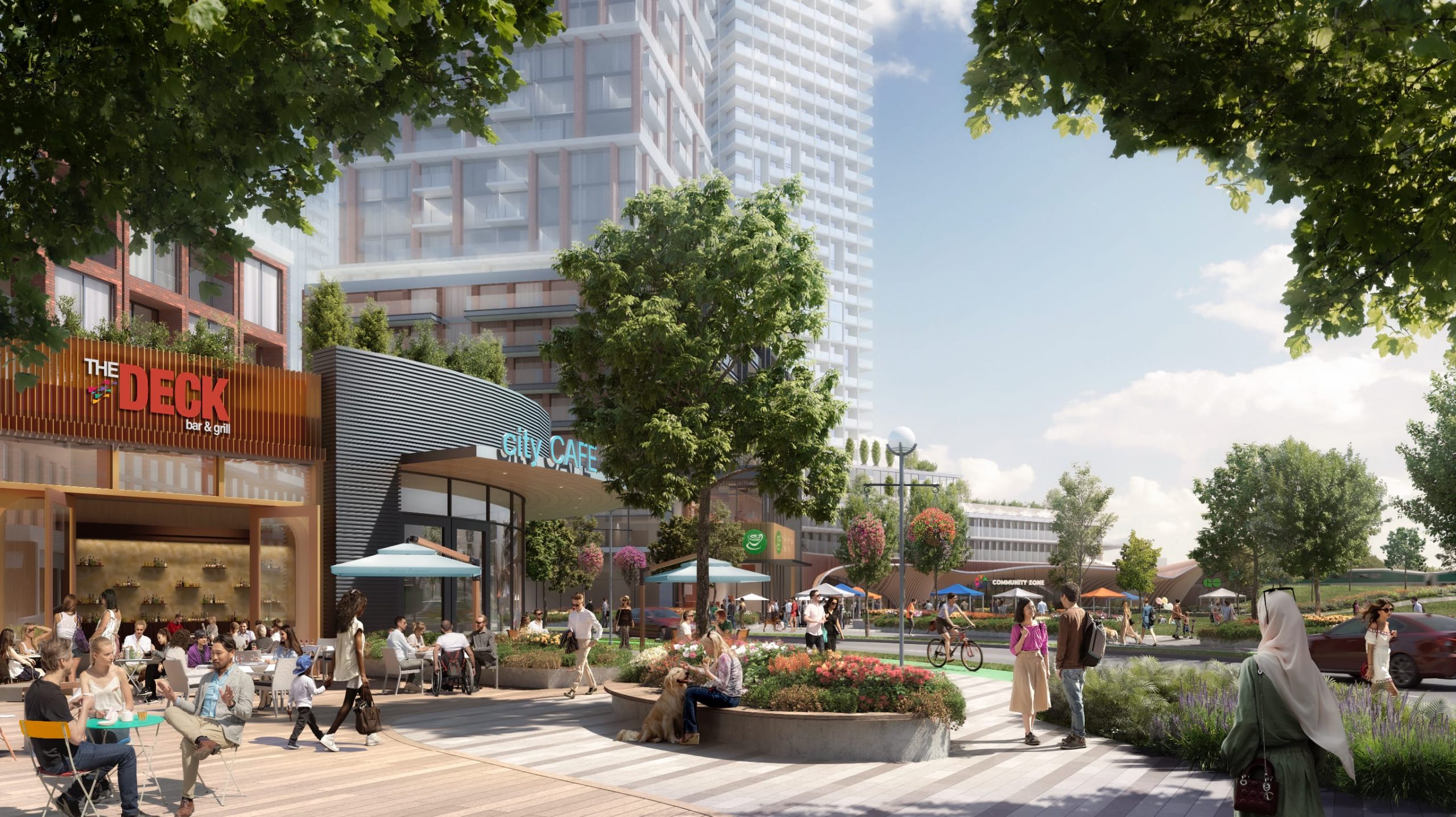 Rendering of the largo along the retail high street, image via submission to the City of Toronto.

Regarding built form, the Panel felt that more work needed to be done to improve the development, saying that the buildings felt rather standardized in contrast to the flowing, organic street grid proposed. They encouraged the design team to play with the massing to better enhance and complement the dynamism of the street layout, as currently it does not do much to improve upon the quality of the pedestrian experience. 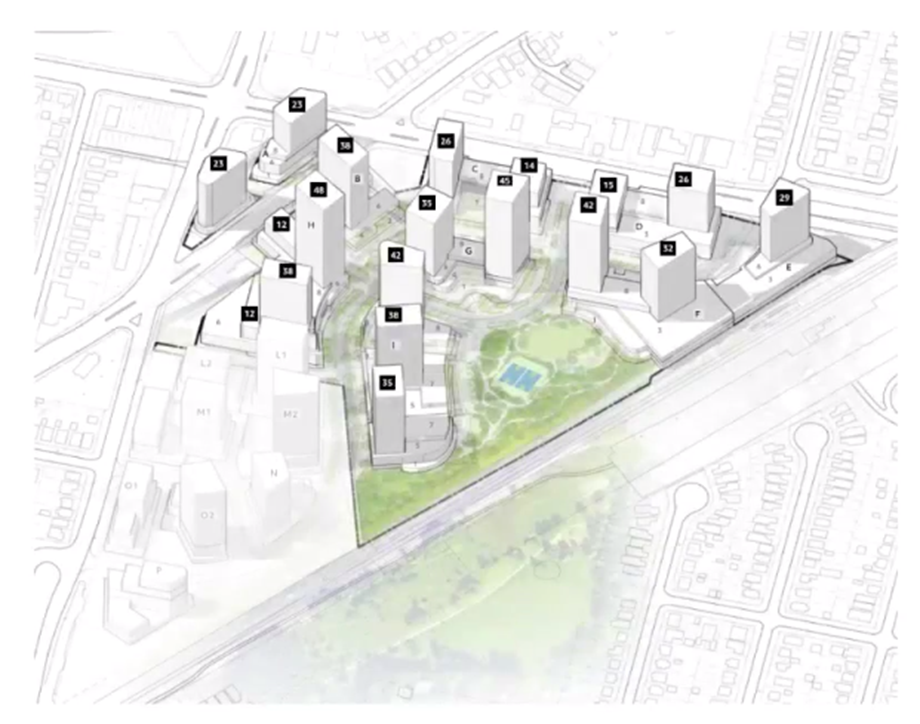 Diagram showing built form, image via submission to the City of Toronto.

Panel members also called for greater porosity throughout the site, though they acknowledged the difficulties in doing so. The soil on the property is heavily contaminated, resulting in several of the parking garages being planned above ground level. The design team has tried to mitigate this by lining the streets with commercial and residential uses, but the parking garages still result in very large floor plates and rather massive podiums. The Panel was concerned by the quality and lack of mid-block connections. 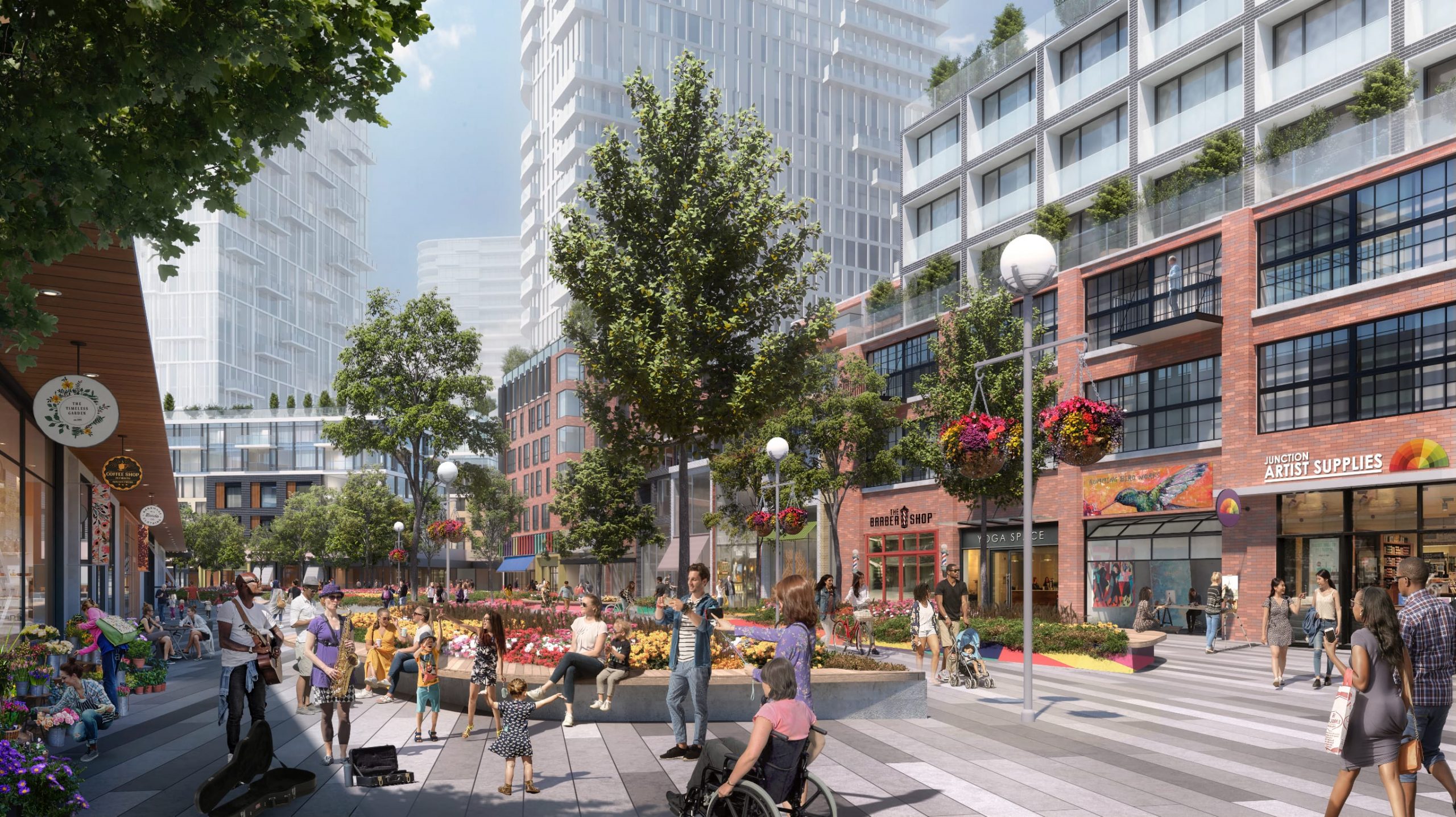 Rendering of retail-lined POPS, image via submission to the City of Toronto.

Another common critique was that the entrance to the GO station did not feel like the focal point of the development, though the Panel felt that it should be. They stated that the retail high street seemed to be the defining feature, whereas the GO station would likely be the busiest part of the master plan with the most foot traffic. They urged the design team to look at revising the two blocks adjacent the GO station entrance to include a more significant public space and to somehow celebrate the transit connection as a very important part of the development. 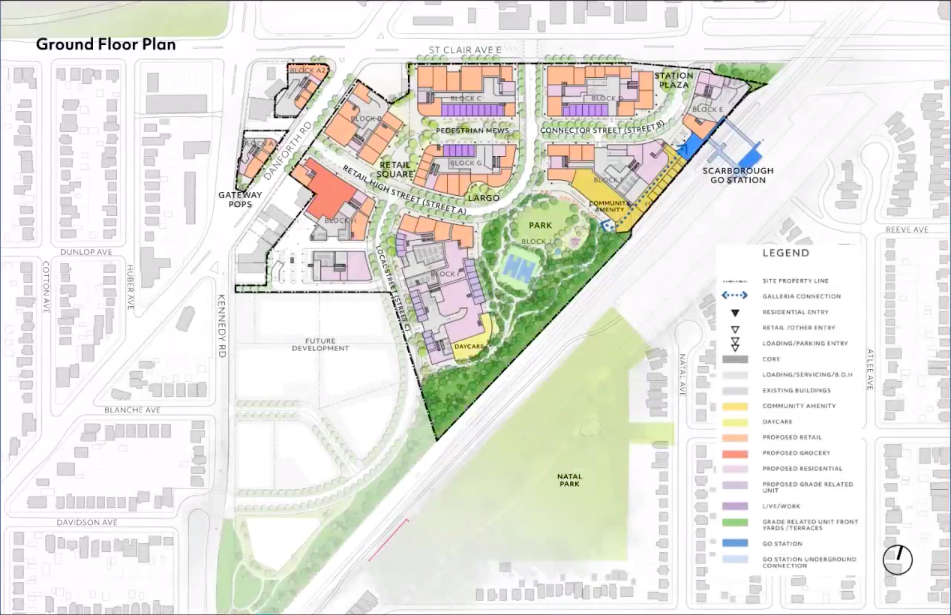 Ground floor plan, image via submission to the City of Toronto.

All of these comments culminated in a common theme: that the master plan needed a finer level of detail overlaid onto it. One Panelist commented that they understood quite well the public face of the development that creates a destination for the larger neighbourhood, but not so much the private aspects of how a resident experiences day-to-day life here. They wanted to see more intimate spaces in the public realm, and a more detailed examination of the pedestrian experience, focusing on providing smaller but significant gestures that improve the quality of the urban spaces. 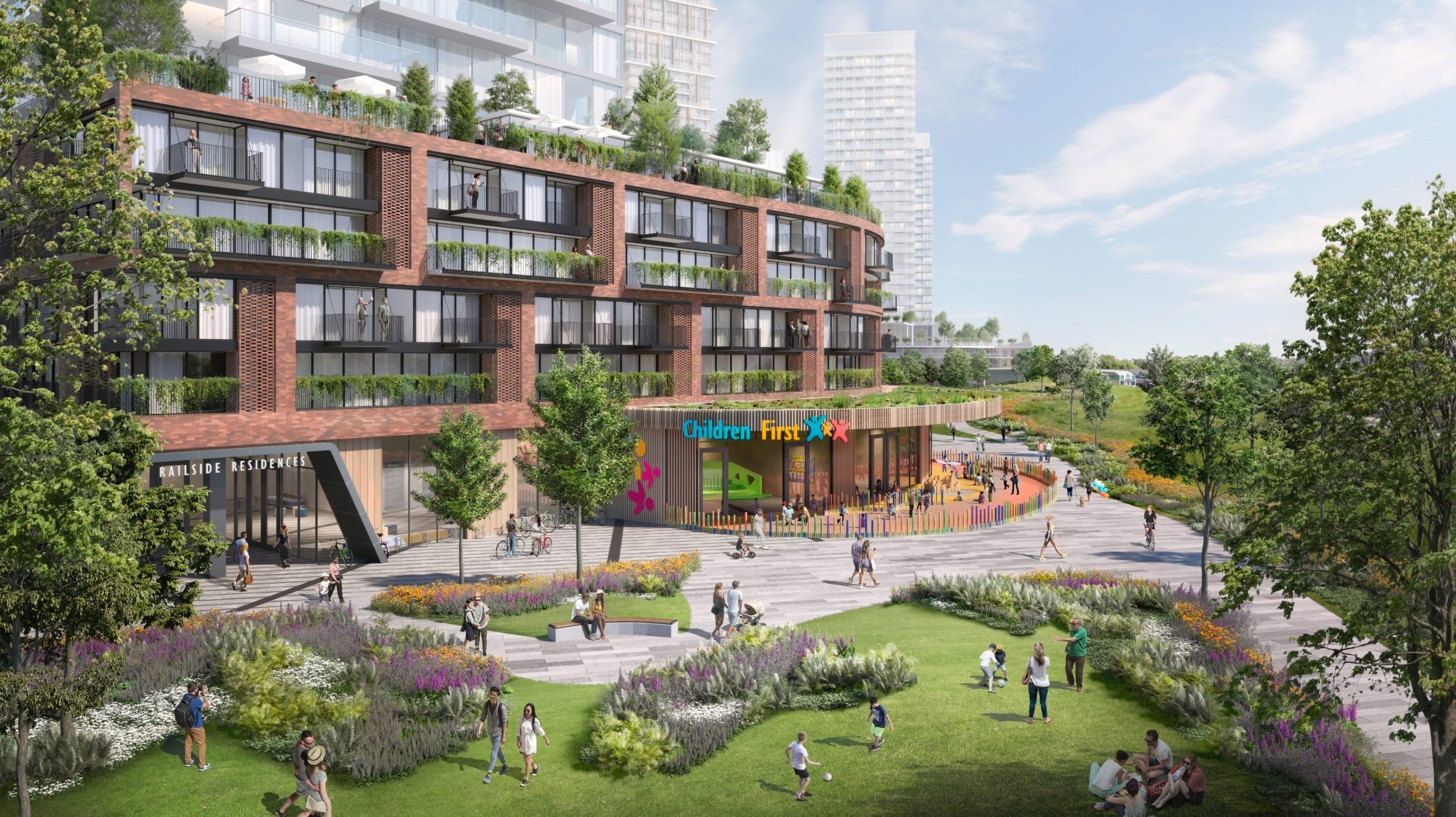 Rendering of southern open space, image via submission to the City of Toronto.

The Panel also threw in that they wished the developer owned all of the lands within the St. Clair-Kennedy-rail corridor triangle, and that the master plan would greatly benefit from including the missing pieces. While the City is working closely with Republic’s team to develop design guidelines for the area, the Panel was wary that the handful of properties not included in the master plan could potentially do harm with future developments that contradict the principles of this proposal. They lamented that these are not included at this time, and cautioned that they should be taken into consideration when considering the relationship of the master plan to the larger neighbourhood. 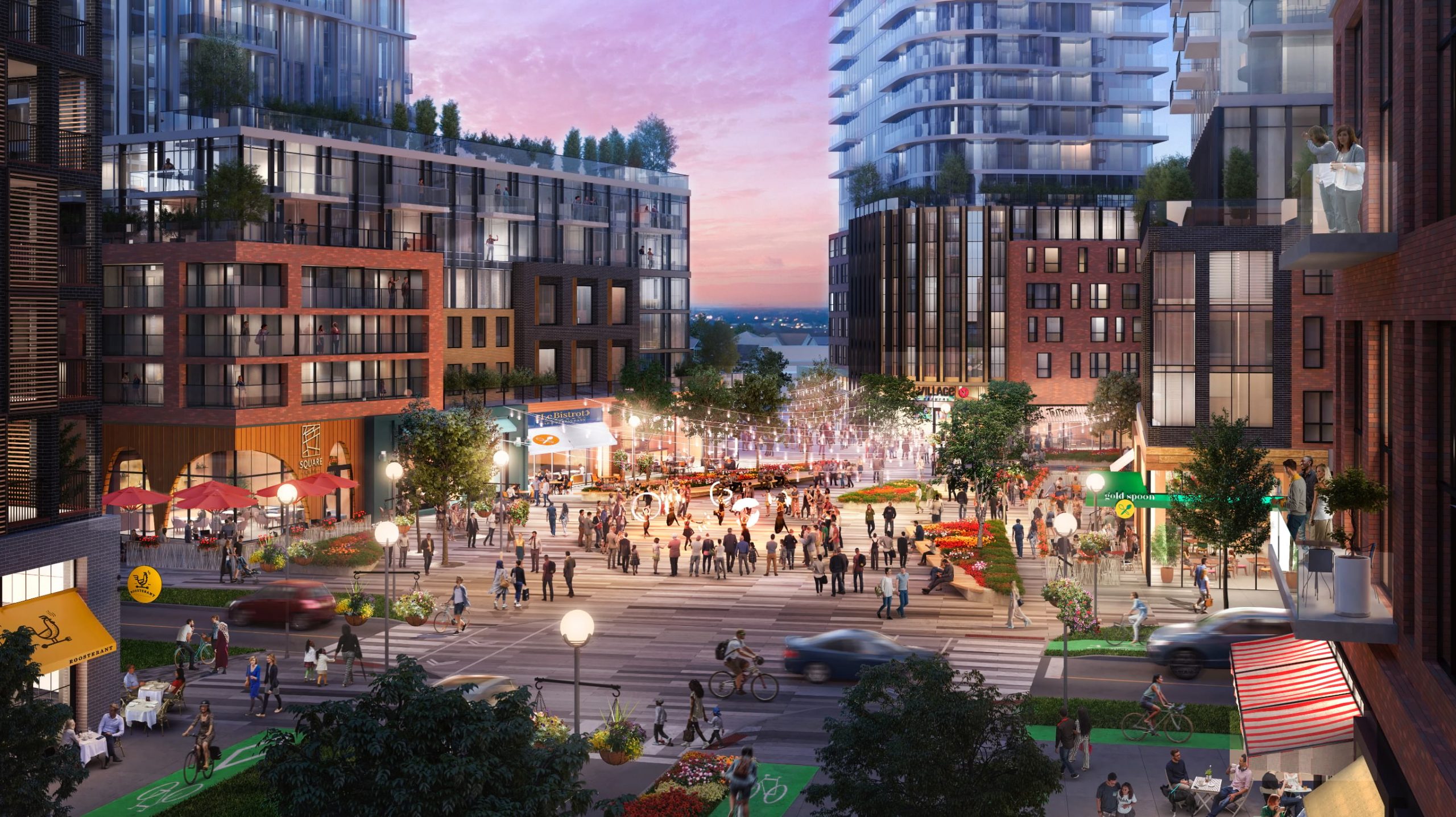 Rendering of a POPS, image via submission to the City of Toronto.

Overall, the Panel was encouraged by what they saw, and while they pushed the design team to iron out the kinks in the project with several suggested improvements, they ultimately voted unanimously in support of the proposal.

We will keep you updated as the Scarborough Junction Master Plan continues to evolve, but in the meantime you can check out the database file for more info, or join in on the discussion by checking out the associated Forum thread linked below, or by leaving a comment in the space provided on this page.