Public space is not necessarily the first thing that comes to mind when mentioning the Gardiner Expressway. The 55-year-old highway has long been seen as a difficult barrier between the city and the waterfront as the downtown core grows around it, an increasingly urban and pedestrian-focused environment encroaching on an aging piece of infrastructure harking back to the golden age of the automobile. But the Bentway is proving that an urban expressway need not be a desolate scar on the landscape, as the next phase seeks to expand its footprint below the towering Gardiner. 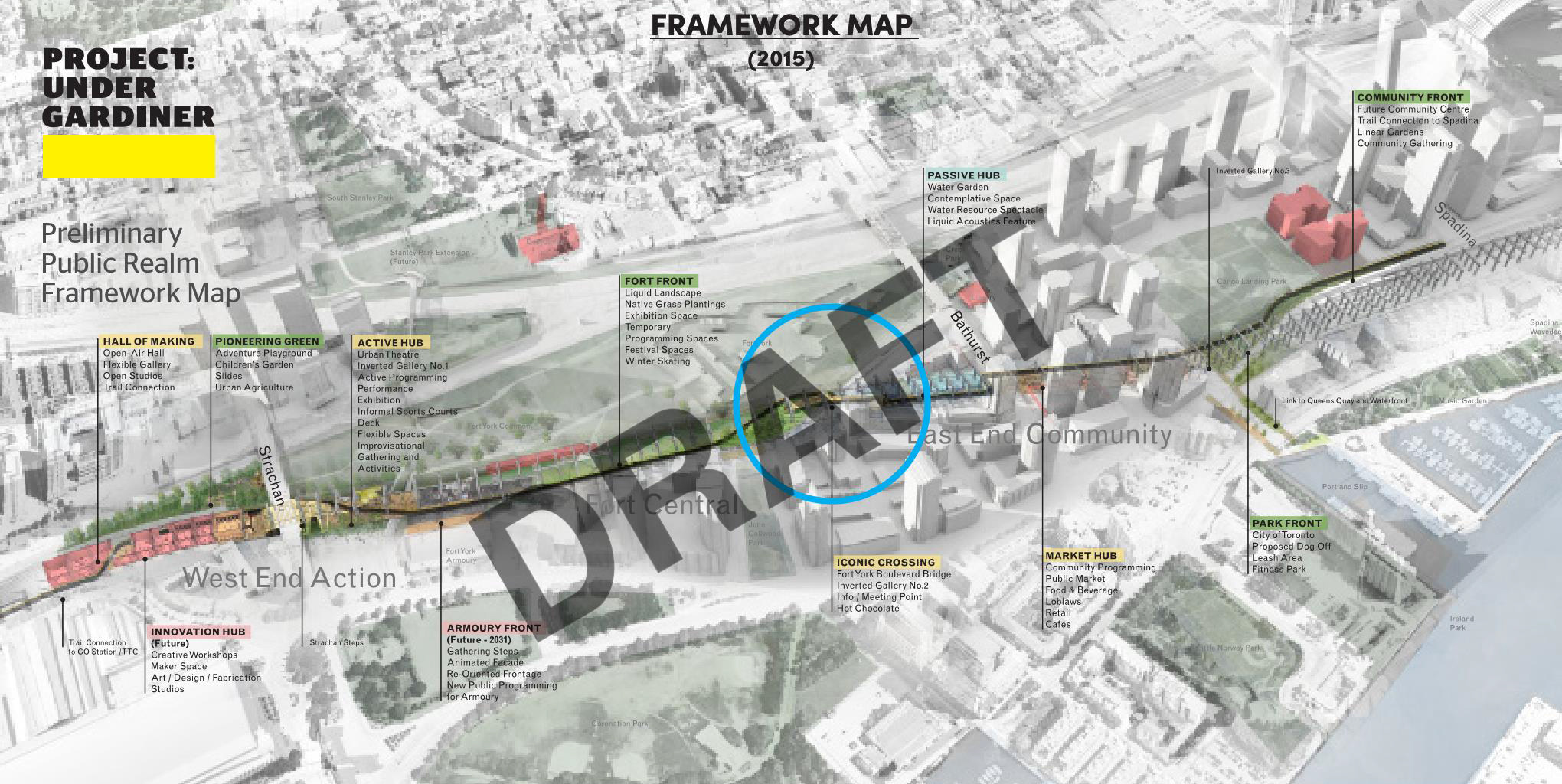 Early plan for the Bentway, image via submission to Waterfront Toronto.

First announced in 2015 after a generous donation from the Judy and Wilmot Matthews Foundation, the Bentway seeks to transform a previously uninhabited 1.75km-long space beneath the elevated Gardiner Expressway into a new linear public park, connecting Strachan Avenue and Fort York in the west to Spadina Avenue in the east, with the potential to expand further in either direction. The first phase, which runs from Strachan to Fort York Boulevard, opened in 2018 and has been a great success, featuring a skating trail and seating area and playing host to many shows and exhibitions.

Overall plan of the Bentway, image via submission to Waterfront Toronto.

The second phase of the Bentway involves the construction of a new pedestrian and cyclist bridge across Fort York Boulevard where it passes diagonally beneath the Gardiner. Despite already having a grade-level crossing, the plan for the Bentway includes a feature bridge as a way to coherently connect both sides of the park both visually and physically, while providing more programmable spaces and a safer crossing for all users.

Phasing and site plan with Phase 2 circled in blue, image via submission to Waterfront Toronto.

Since the first phase of the Bentway opened in 2018, the second phase has been stalled, largely due to its proposed design. The bridge was originally envisioned to be suspended from the Gardiner itself, using the massive concrete columns to hang a thin, sinuous bridge that weaves between them across Fort York Boulevard. The plan to suspend the bridge using the existing structure proved problematic, however, as construction needed to be delayed until after the completion of planned maintenance work on the Gardiner deck. This would have punted the opening of the bridge to beyond 2026. 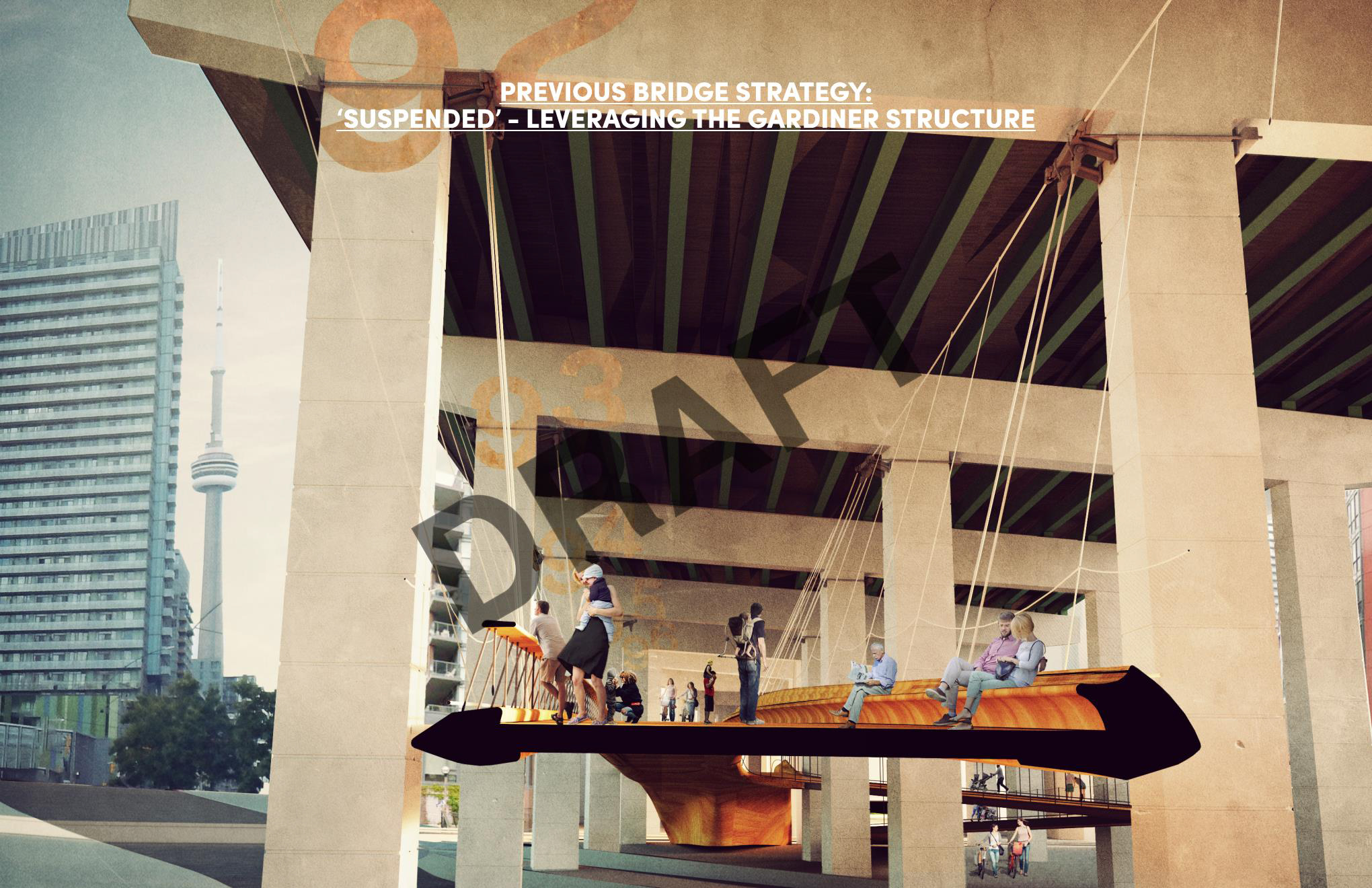 Original design concept for the Phase 2 bridge, image via submission to Waterfront Toronto.

Facing that very long delay, the City decided to revise the design of the bridge to something that could be built in the more immediate future, and kicked the project back into gear in March, 2021. The new design now features a more traditional bridge structure sitting on the ground rather than suspended from above, and is completely independent of the Gardiner’s structure, meaning construction can proceed without being hindered by maintenance work on the highway deck.

The new design is headed by Public Work, and was presented before the Waterfront Toronto Design Review Panel (WTDRP) in April, 2021. The bridge design described below is only preliminary and undoubtedly change as the project moves forward. A few of the major issues identified by the Panel are summarized below, highlighting specific aspects that are likely to be refined.

The design team describes the bridge as “threading the needle”, creating a long path that weaves its way between the columns holding up the busy highway above. Aiming to curate a unique experience with several feature vantage points along its route, the bridge inhabits a previously inaccessible space amongst the forest of concrete columns, celebrating the impressive spatial qualities of the massive piece of infrastructure flying overhead, while connecting to its historic surroundings below. 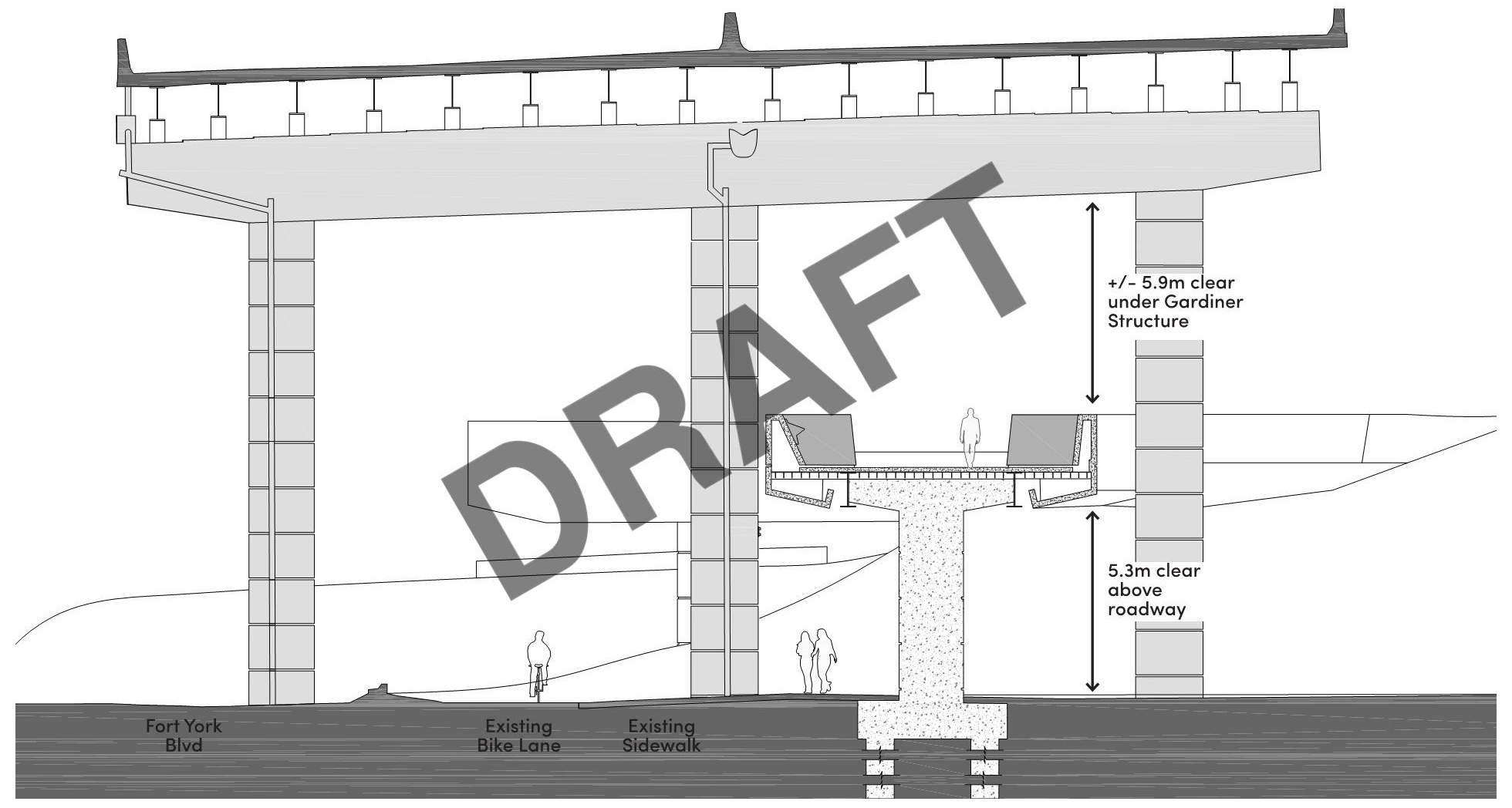 Section through the concrete room, image via submission to Waterfront Toronto.

The bridge in its current form is made up of three distinct sections. The west approach from Fort York involves a winding path snaking up a man-made slope, arranged in a way that creates a plaza and gathering space at its base, referred to as the West Landing and Timber Plaza. This landing is seen as a way to merge the natural and man-made, with the bridge seamlessly blending into the hill, playing off of the complementary language of the adjacent Fort York Visitors Centre, which tucks itself into the landscape along the edge of the historic site.

View of the western gathering space, image via submission to Waterfront Toronto.

At the top of the west access, three separate ‘elevated rooms’ seek to carve new, unique spaces hovering amid the massive concrete columns of the Gardiner. Each room is finished with a different material that reflects the historic, industrial, and infrastructural history of the site.

Massing diagram of the West Landing and Elevated Rooms, image via submission to Waterfront Toronto.

The westernmost and largest room is finished with wood, and features seating and an overlook that peers down to the new gathering space below. The wood plays off the historic construction of the adjacent fort and introduces a natural material into the concrete and asphalt environment below the Gardiner.

The Elevated Rooms and West Landing, image via submission to Waterfront Toronto. 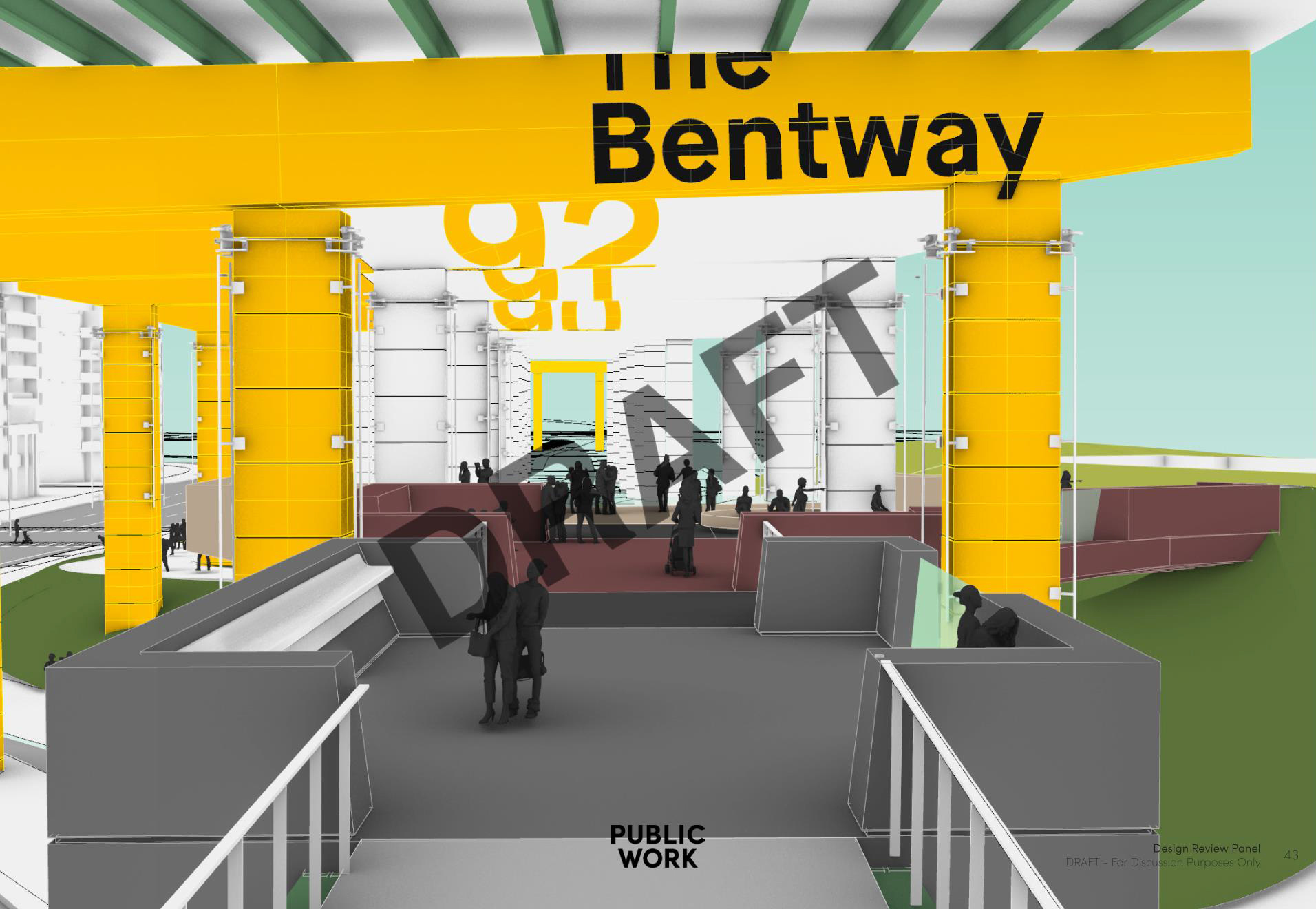 The Elevated Rooms, image via submission to Waterfront Toronto.

The third section of the bridge is the eastern switchback, a long ramp that doubles back on itself, connecting the elevated rooms back down to the ground, which finishes off at Grand Magazine Street. The simple ramp threads its way between the Gardiner’s columns, but its path is largely constrained by the need to maintain parking and loading access through the POPS below to the neighbouring condo buildings.

The WTDRP critiqued the project, but two main points were reiterated between most Panel members that will have the greatest impact on the design. The first involved the lack of shortcuts included on the bridge. Panel members pointed out that the bridge was very long with no secondary exits, meaning pedestrians and cyclists would be stuck trudging along its entire length when crossing the street at grade would be much quicker and more efficient. They strongly emphasized that staircases at both the west and east sides of the bridge are absolutely necessary to ensure that it is used more frequently, and with less frustration from its users. 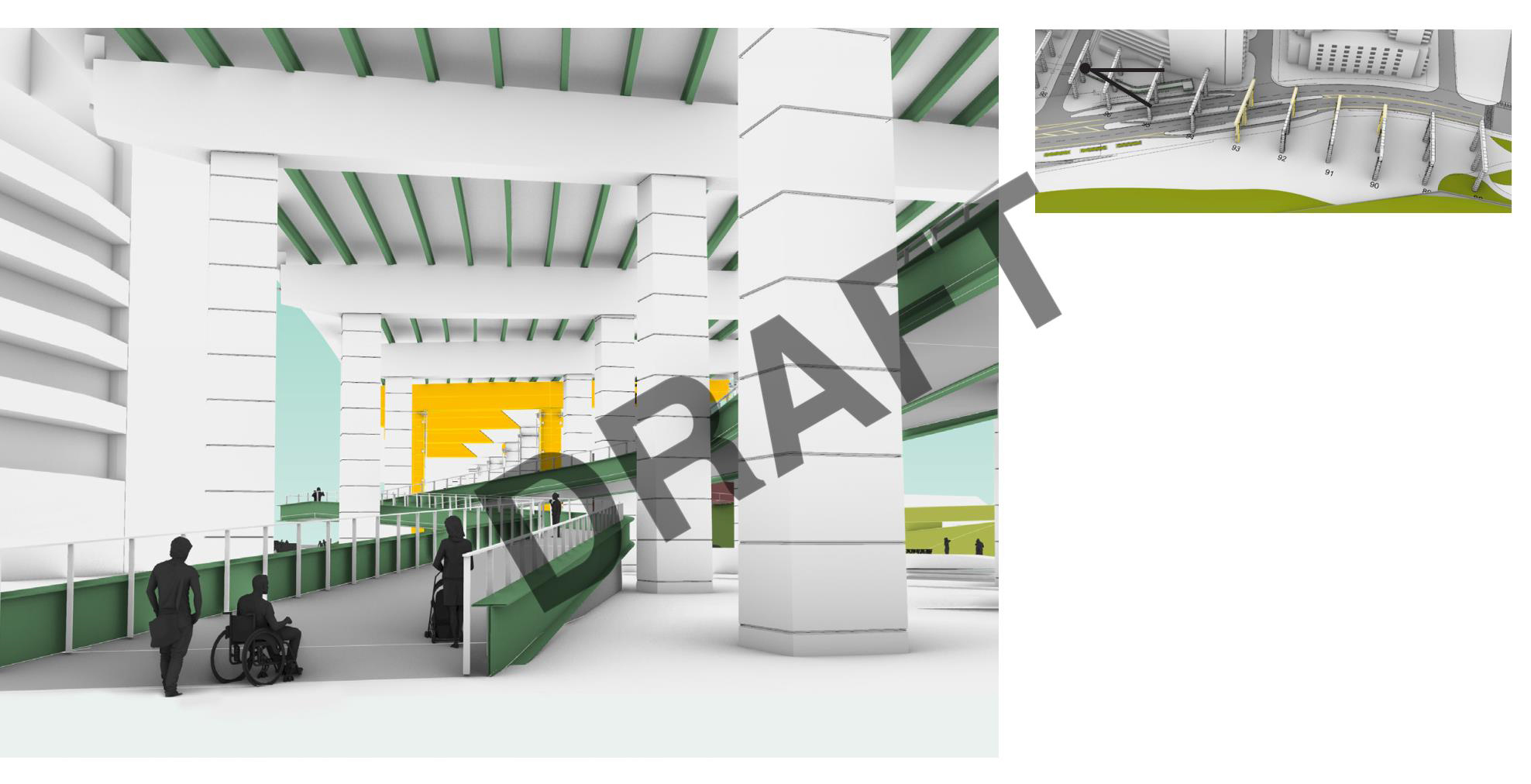 View of the East Switchback, image via submission to Waterfront Toronto.

The second point was that the design needed to be simplified and needed to be a bit more coherent. The majority of Panel members felt that the three different materials used for the elevated rooms were unnecessary and overcomplicated the design, while the bridge as a whole was lacking a strong, overarching theme to create a coherent narrative. It is likely that the materials of the bridge will change in its next iteration to address these concerns.

View of the Elevated Rooms, image via submission to Waterfront Toronto.

Despite the concerns, the Panel voted in support of the project, with only one Panelist voting non-support.

The project is moving on a compressed timeline, aiming to go out for tender by the end of July, 2021. We will keep you updated as the design continues to evolve, but in the meantime, you can tell us what you think by checking out the associated Forum thread, or by leaving a comment in the space provided below.