New rapid transit—both planned and under construction across Toronto—promises increased connectivity for many neighbourhoods, and creates opportunities for TOD—Transit Oriented Development—in the process. The future Crosstown LRT has created several TOD opportunities along the less-densely built-out Eglinton East, though development along the Crosstown’s Eglinton Avenue West stretch has been limited to more constrained sites, with few TOD opportunities west of Yonge. 2400 Eglinton Avenue West is one such site to have its development potential enhanced by future improved connectivity. Developer SmartCentres REIT recently applied for rezoning to bring a new 35-storey tower to the site, part of a wider planned community known as SmartCentres Eglinton West.

Located immediately adjacent to Caledonia station on the Crosstown LRT, the site is situated to take full advantage of multi-modal transit infrastructure. By the time residents move in, the new Metrolinx Caledonia station will be served by TTC buses and the GO Train servicing the Barrie GO Line with direct access to Union from Caledonia. A short ride to the west along the Crosstown will also allow residents to transfer to the Union Pearson Express, direct access to the Airport. The opening of the Crosstown will also improve travel times while making streets more pleasant for pedestrians too. 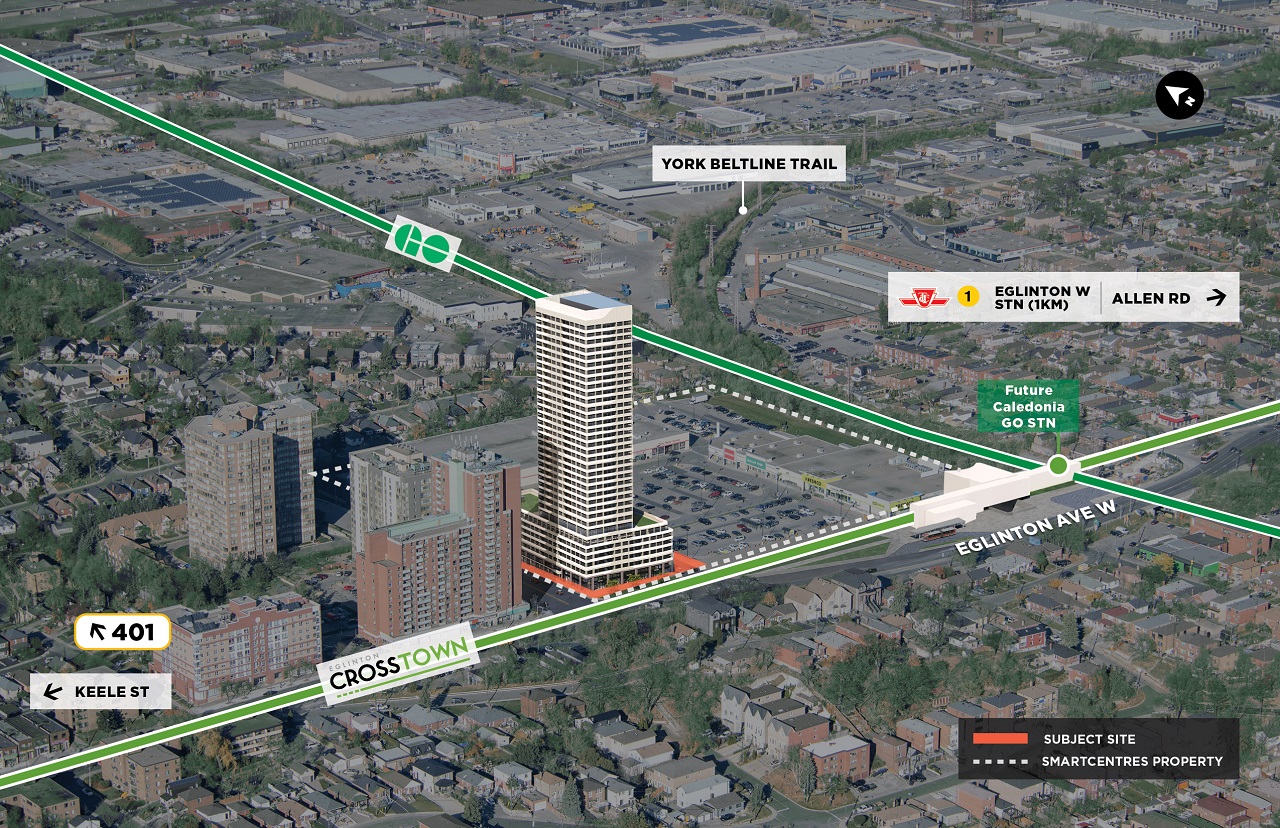 When in operation, the Crosstown LRT trains will make the trip between Keele and Eglinton West stations in just six minutes. By boarding at Caledonia station, residents of SmartCentres Eglinton West will be able to make it to the TTC’s Line 1 University subway in five minutes, and the Yonge subway in just five more.

Set to rise to 110.8 metres from a seven-storey, L-shaped podium, the planned Turner Fleischer Architects-designed project is being developed by SmartLiving, SmartCentres’ residential sub-brand. The 29,683 m² building will be predominantly residential in use with 400 units in a range of layouts, to be supported by 2,460 m² of amenity space, while the ground floor along Eglinton will be animated by 715 m² of new street-fronting retail space. 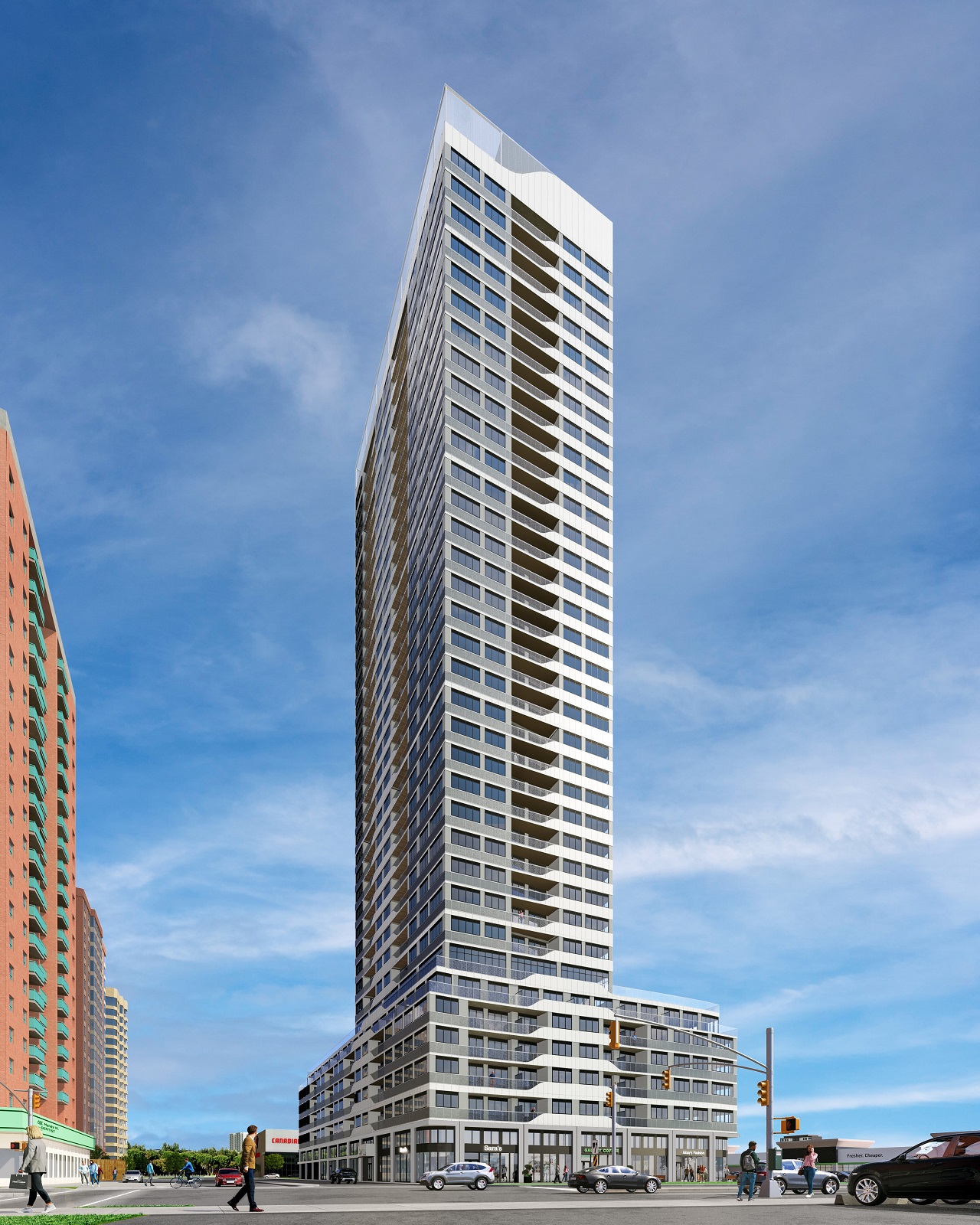 Design-wise, the podium features deviations from the traditional condominium tower massing that has been incorporated in response to the surrounding conditions. The east podium facade features a prominent curve, mirroring the former path of the Beltline here, while another curve to the south hugs the alignment of Eglinton Avenue West. Other more subtle gestures include decorative curved detailing on the tower facades and mechanical penthouse levels, with this horizontal banding to be executed using perforated metal finishes. 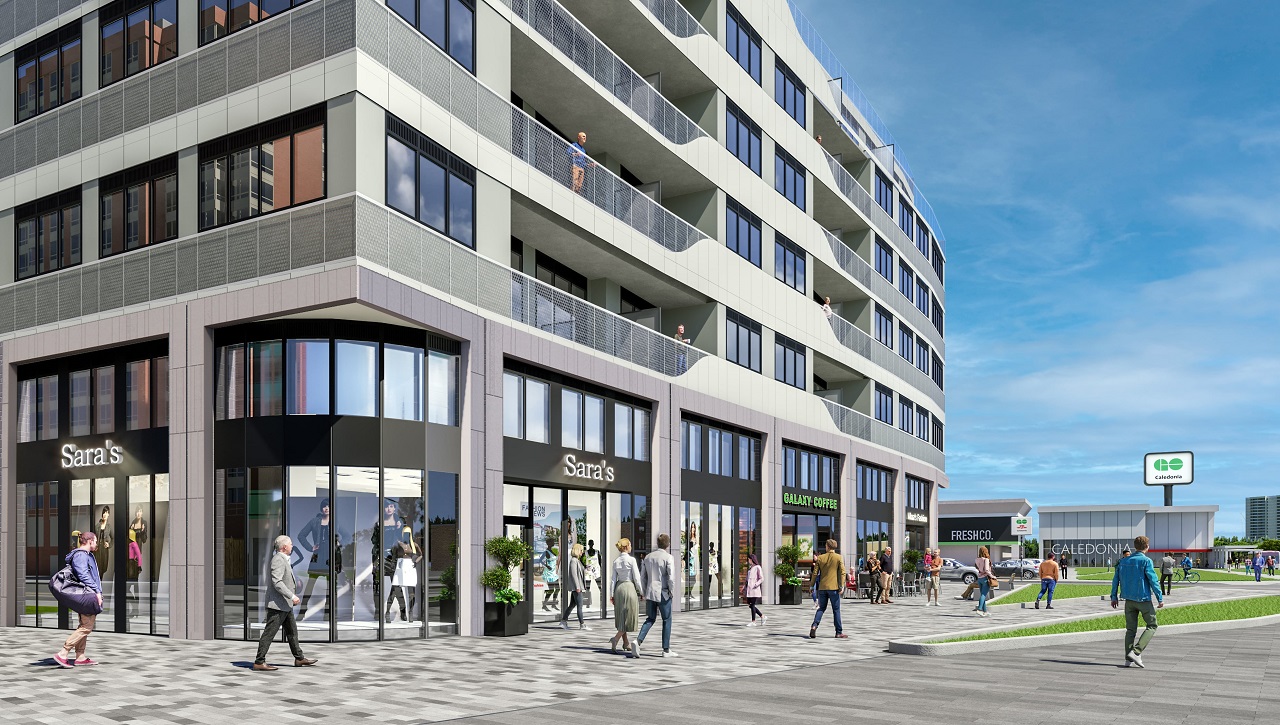 With 360 long-term and 40 short-term bicycle parking spaces in the building, residents will be able to take good advantage of the nearby Beltline Trail—approximately 250 metres from the site—offering cyclists and pedestrians a multi-use path extending to the Don Valley.

Amenity spaces will include a party room, gym, guest suite, and a landscaped rooftop deck, and suites will cater to a wide demographic. Ranging in size from 600 to over 1,000 ft², in one, two, and three-bedroom layouts, of the total 400 units, 160 are planned to be multi-bedroom suites. With suite sizes, pricing, and amenity offerings being competitive with Downtown condominiums, and with abundant transit options providing quick commutes around the city and to the surrounding region, the project is expected to attract residents ranging from university students to young professionals to new families looking for livability at a more affordable price point.

The proposal marks the first phase of a planned Transit Oriented Community with adjacent access to both LRT and GO Transit stops. One of the first major developments on Eglinton West in a generation, the project also has the potential to shape future transit-oriented developments in sites unlocked by new transit expansion.