At 25 St Mary Street at the south end of Toronto’s Bloor-Yorkville area, there is a V-shaped, 24-storey rental apartment building owned by Tenblock. Completed in 1965, the building is designed in the Tower-in-the-Park style, with a significant amount of surface parking and green space on the lot, with no walls of the building that engage the streets around it. 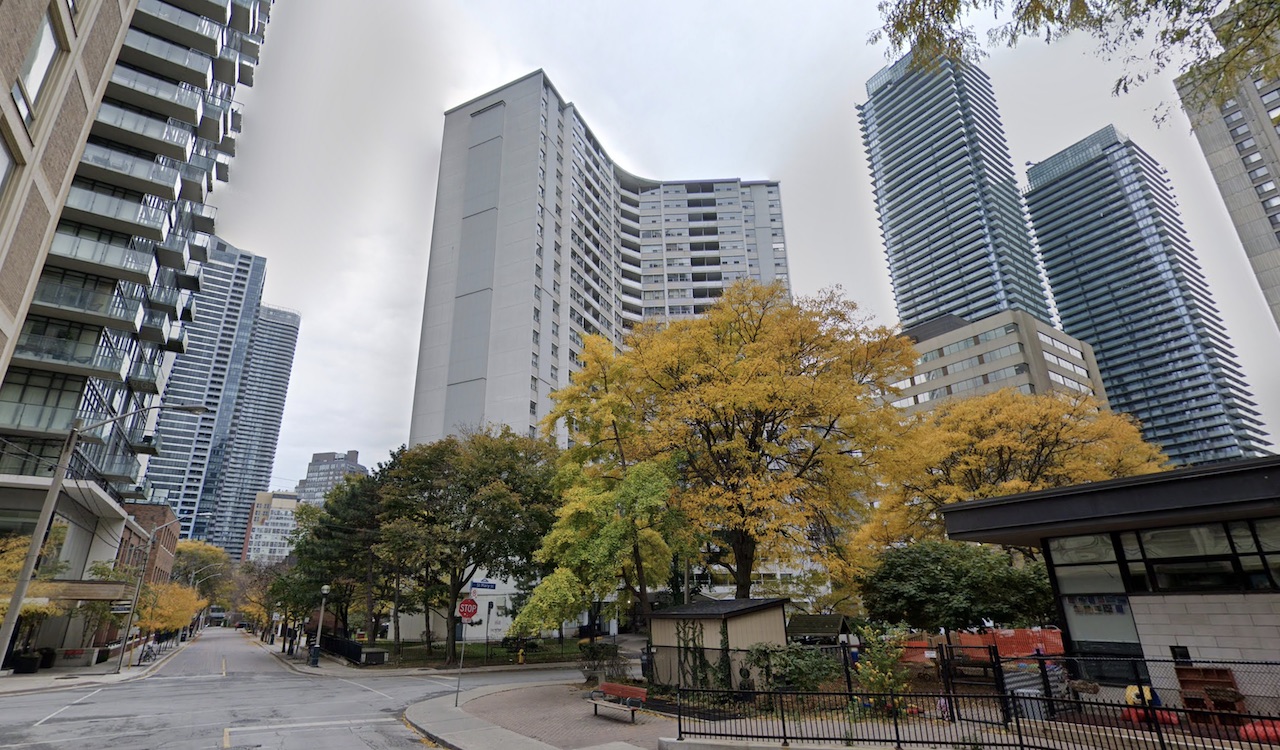 The area around the building has changed significantly since it was built, becoming significantly denser through the redevelopment of neighbouring properties with taller buildings, and it promises to continue changing with other redevelopment proposals in the works. Now TenBlock is joining the other local landowners by proposing a redevelopment of their own, seeking to replace the existing 24-storey apartment building with two towers of 54 and 59 storeys, joined by a podium bridge. The new buildings would address the surrounding streets, while making the open space on the block accessible to the public for the first time. 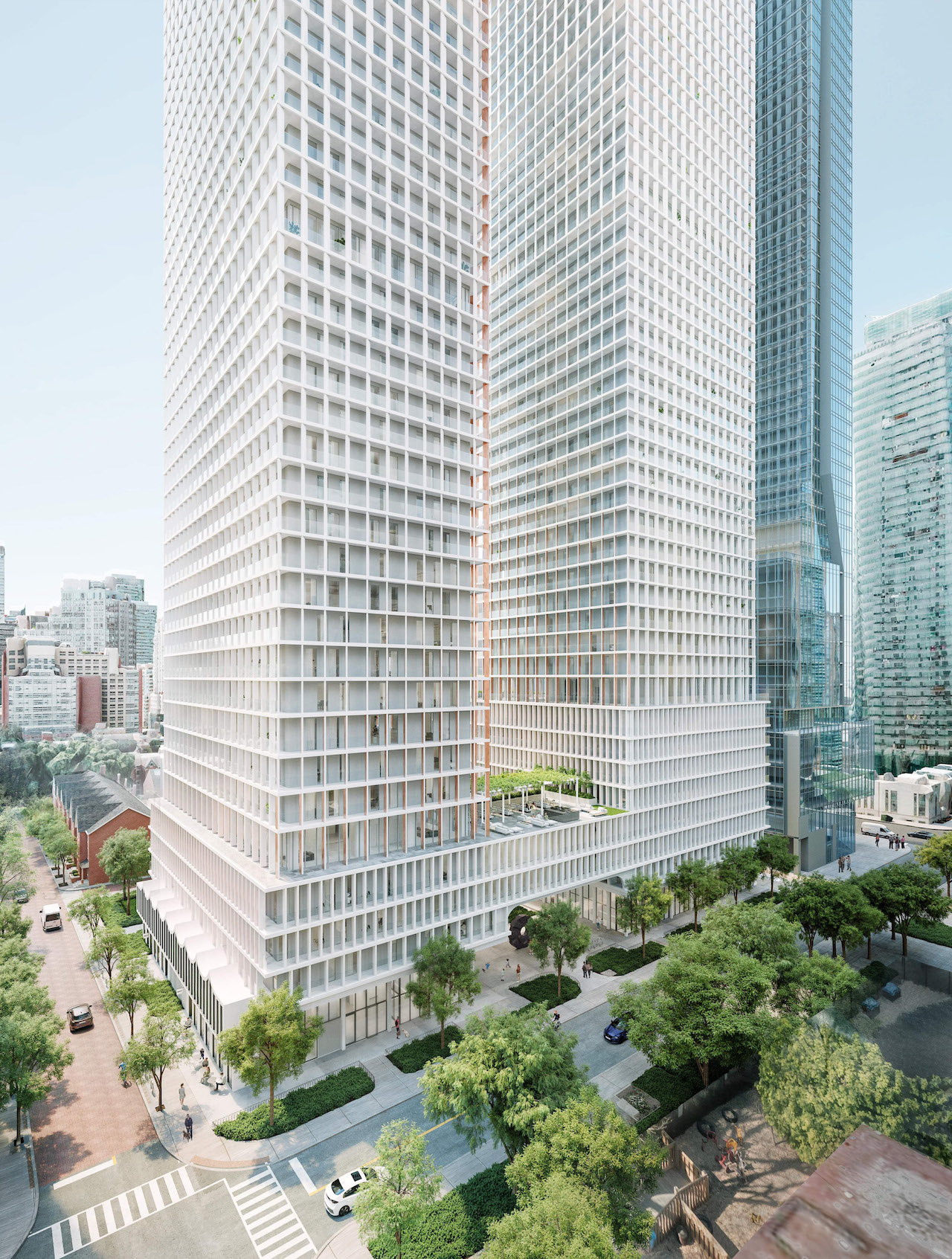 Looking southwest to 25 St Mary, designed by gh3 for TenBlock

Designed by gh3, the 59-storey/194.9 metre-tall West Tower and 54-storey/178.95 metre-tall East Tower face each other across a tree-lined courtyard. Access to the two residential lobbies is via St Mary Street, with each building sporting colonnades at ground level that shelter those walking beside them. A podium bridge joins the buildings where they face St Mary Street, linking them on the third and fourth floors. Below the bridge, and extending south to Inkerman Street, is a public courtyard designed by Claude Cormier + Associés. The courtyard is also lined by colonnades at the base of the buildings, both of which are glazed and provide views from the courtyard into the lobby hallways of each building. The glazing provides “natural surveillance” according to the planning rationale—those passing through the lobbies will have eyes on the courtyard—keeping the area safe. 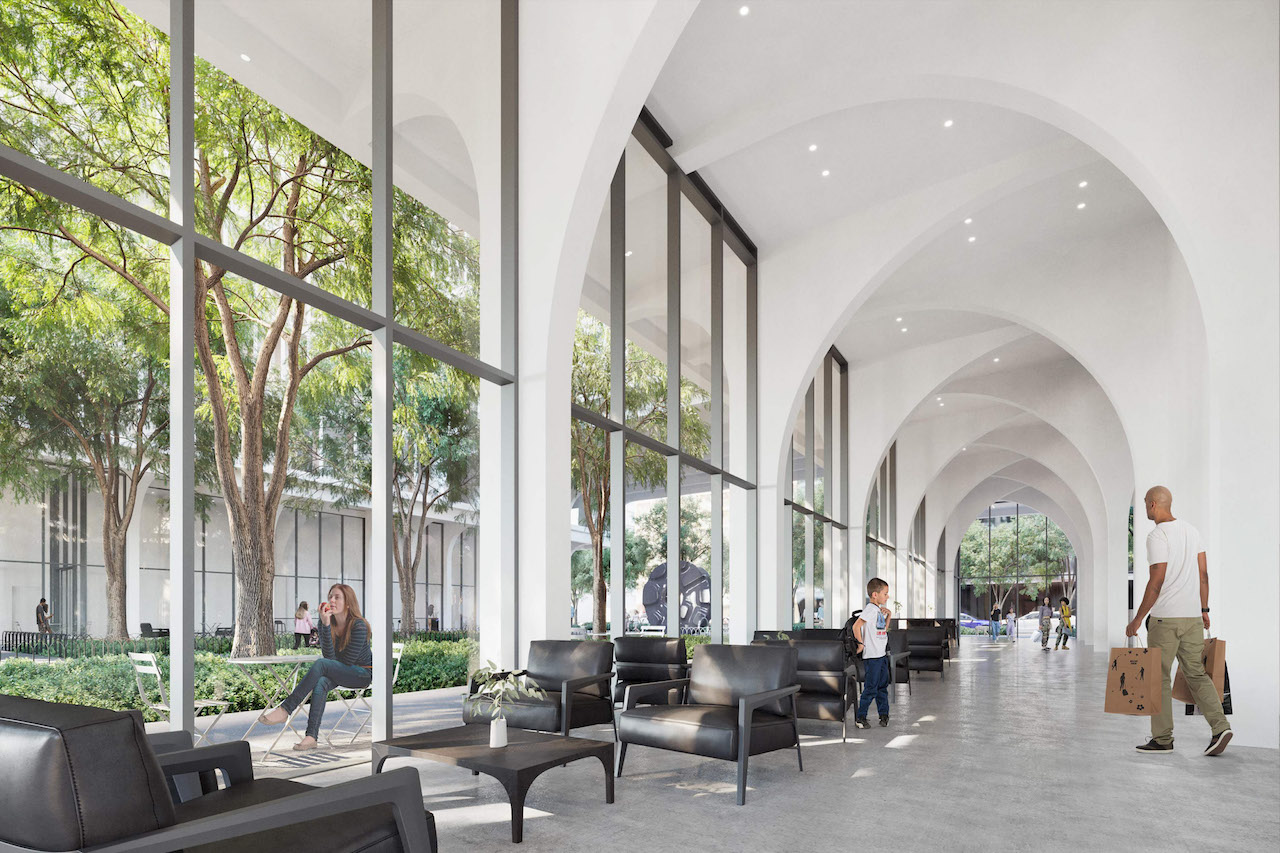 Looking north through the interior colonnade at 25 St Mary, designed by gh3 for TenBlock

Facing St Nicolas Street, the East Tower would have retail spaces totalling 265 m² in area, animating the sidewalk. While the courtyard would be a POPS (Privately Owned Publicly accessible Space), in the southeast corner of the block, 10% of the lot would be given to the City of Toronto as a public park, fulfilling a requirement of developments of this size, while providing porosity to the site, allowing pedestrians to walk through or stop to enjoy the space. Another new access through the site would be along its western side, the only part of the property not front a public street. Here to the north, a driving allowing access to the building’s garage and to its servicing would also be open to pedestrians, and to cycling residents and visitors heading for bicycle parking. South of the driveway is another POPS related to the redevelopment of 1075 Bay Street to the west, a 206 metre-tall proposal which is currently heading to Community Council with a final report that recommends its approval. With open space on the 25 St Mary site adjacent to the 1075 Bay POPS, pedestrians could also continue on 25 St Mary property around the POPS to Inkerman Street to the south. They would also be able to walk through to the courtyard. 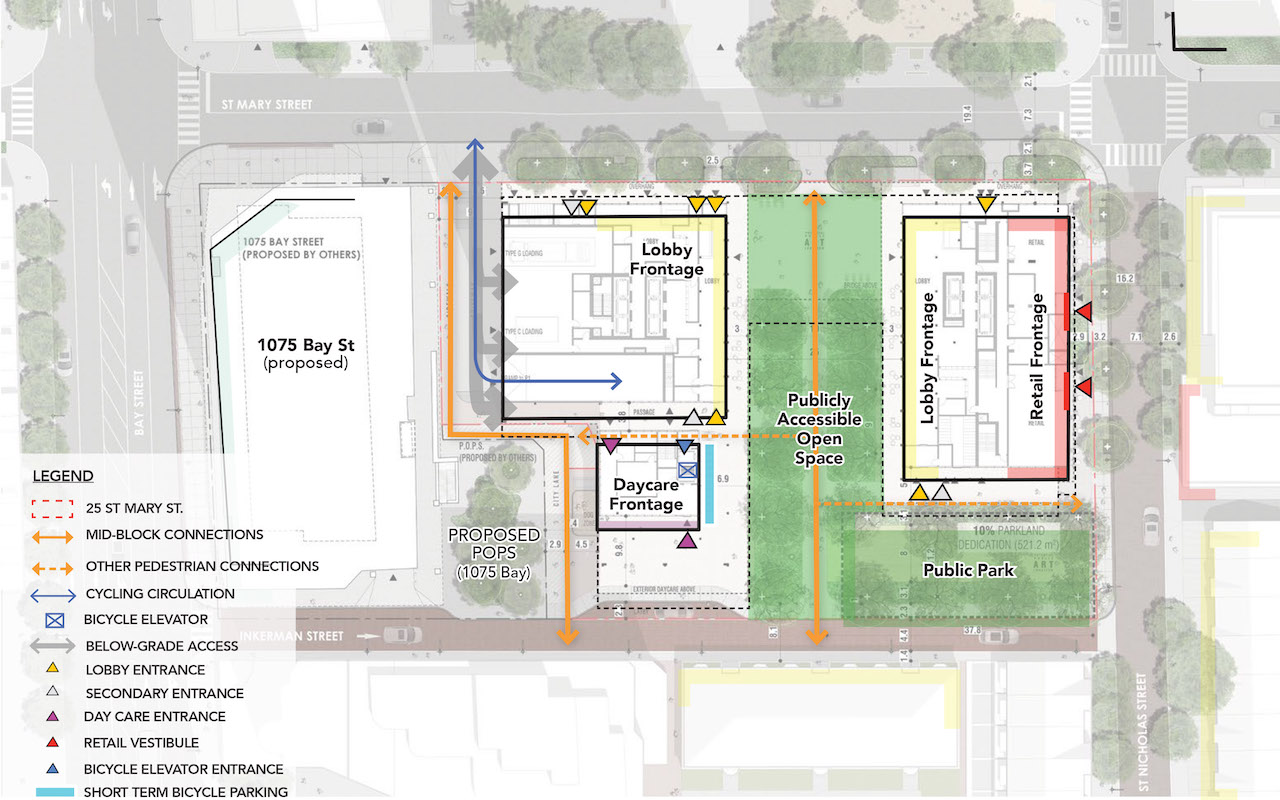 Ground plan for 25 St Mary, designed by gh3 for TenBlock 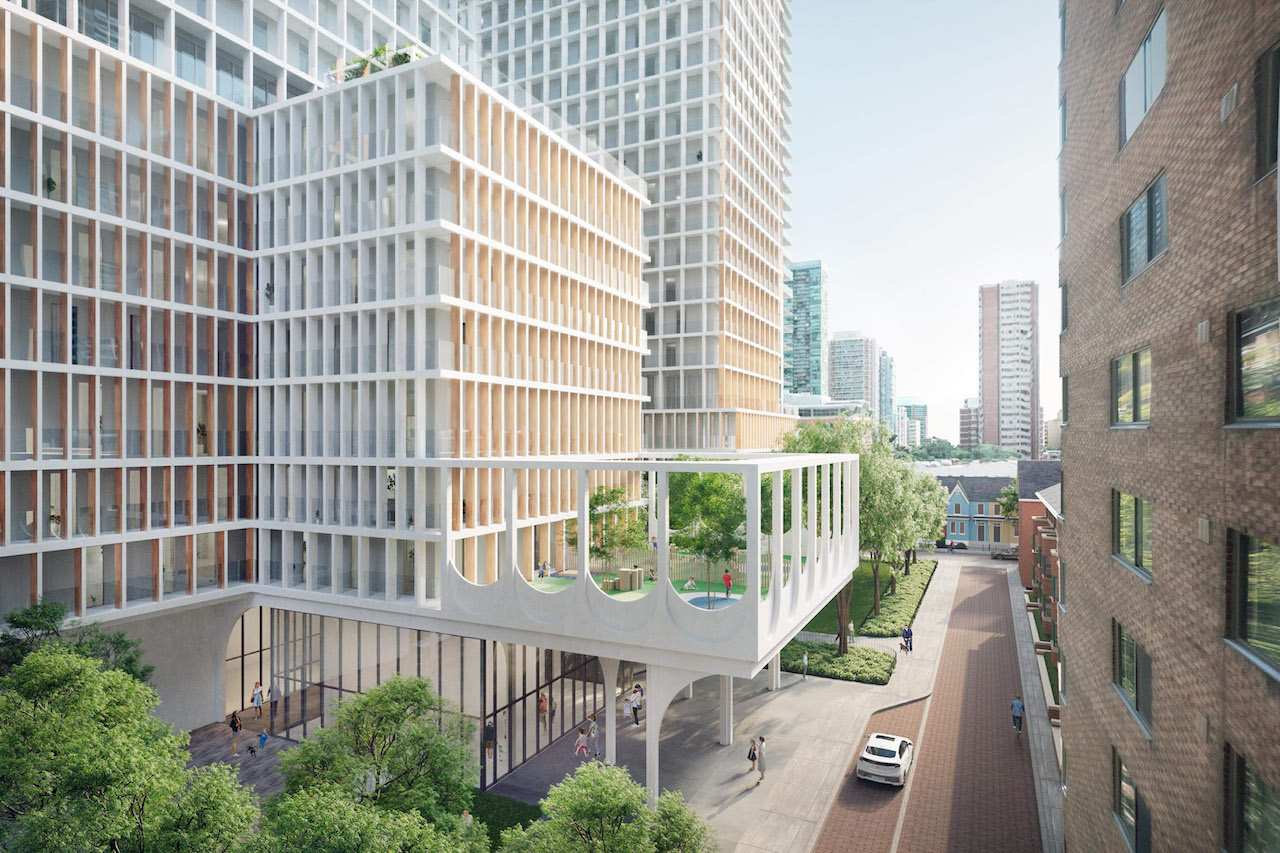 Looking east at the south side of the complex at 25 St Mary, designed by gh3 for TenBlock

This existing building on the site has 259 rental suites. All of them are proposed to be replaced in the West Tower, all of similar size and number of bedrooms. The renters of the existing units would have first right-of-refusal on moving back into a suite equivalent to their current one, under a rent-controlled situation for 20 years. (Tenblock also plans to provide assistance in relocating the current tenants in the meantime.) The West Tower would have another 14 rental suites, while another 870 units would be located in the remainder of the West Tower and all of the East Tower. The tenure of those 870 units—whether rental or condo—has not bee determined at this time. The mix of all breakdown of 1,143 suites in the complex is proposed as 106 studios (9%), 593 one-bedrooms (52%), 351 two-bedrooms (30%), and 93 three-bedrooms (8%). 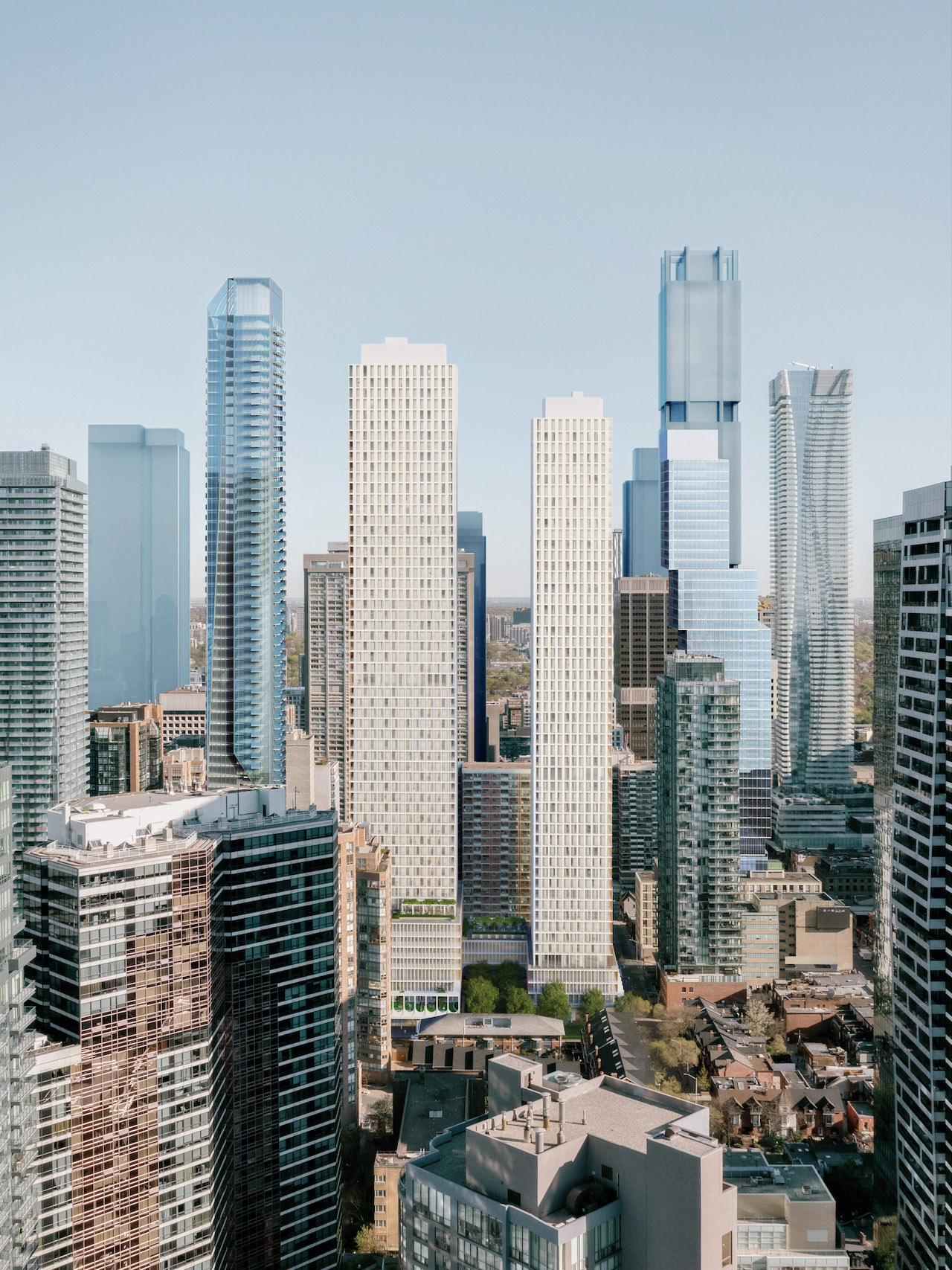 Looking north to 25 St Mary, designed by gh3 for TenBlock

The architectural design is reminiscent of the Tower Hill apartments in St Clair Avenue west of Spadina Road, with a regular grid of white architectural concrete columns rising the full height of the buildings other than for the stepped-back mechanical penthouses at the top, and providing wraparound balconies for all suites. Copper accent strips appleid to the columns will catch the light, providing changing views as pedestrians look up as they pass by, and as the sun moves across the sky daily. 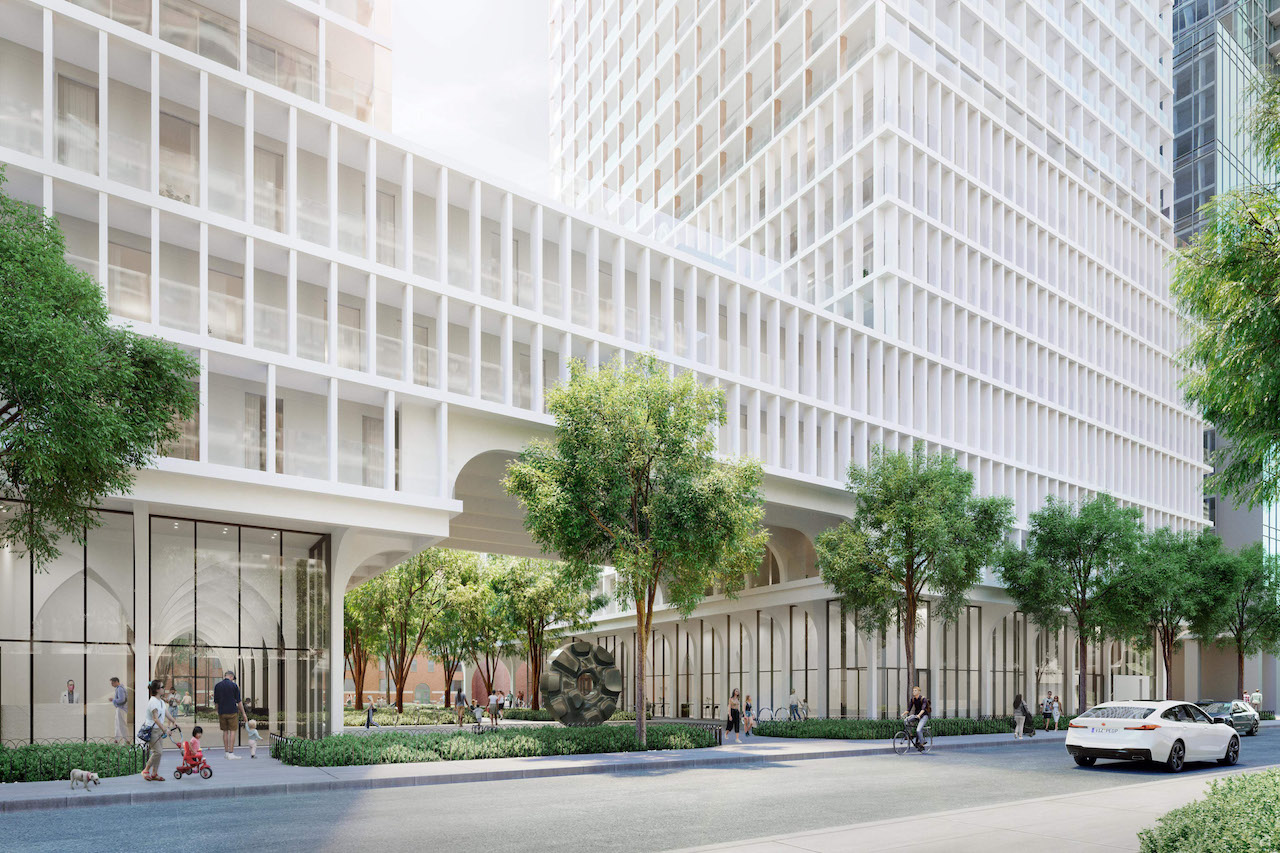 Looking southwest to the courtyard and podium bridge at 25 St Mary, designed by gh3 for TenBlock