A key plank of Mayor John Tory’s first electoral platform, the SmartTrack Stations program, may finally advance into reality—more than seven years after Tory first proposed it. This Tuesday, August 17, the Province of Ontario and the City of Toronto announced that they have signed an agreement in principle to “deliver” the program, launching the procurement process for four new GO stations in Toronto. Ontario will deliver a fifth station through a transit-oriented community process. 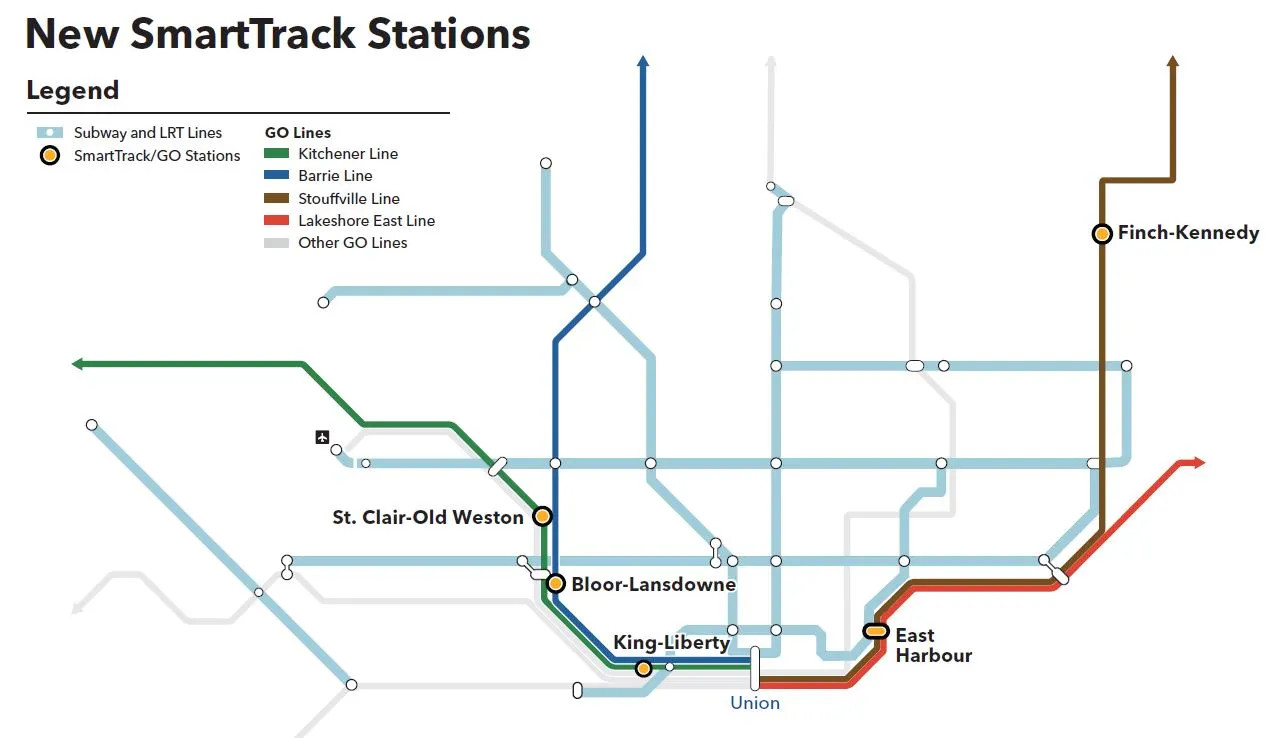 Map of the SmartTrack stations in Toronto, Image, Metrolinx

The revised agreement in principle finalizes the scope and vision of the program, allowing regional transit agency Metrolinx to move forward with the five new stations. Ontario, Toronto, and Metrolinx are collaborating on the program.

With funding from Toronto and the Government of Canada, the program uses GO Transit’s rail infrastructure to remake the regional commuter service into an urban rapid transit network. It leverages roughly 40 kilometres of GO rail corridors through Toronto, connecting to four current or future subway lines and light rail transit services, and nine local transit services from feeder bus and streetcar routes. The City intends to have built the five new stations by 2026.

A provincial-government news release quotes Mayor Tory about the upcoming realization of his SmartTrack dream: “The SmartTrack Stations Program will transform existing rail infrastructure in our city from a regional commuter service into an urban rapid transit network that will greatly benefit our residents and give them more transit options. We know that we cannot deliver vital transit projects on our own, by working with the other levels of government we can ensure that we are moving quickly to expand our transit system, relieve congestion, increase transit accessibility, and create new economic and employment opportunities for residents.”

In the same news release, the provincial government explains that… “by 2041, the stations are projected to attract a combined 24,000 boardings and transfers during the average weekday peak hour and are estimated to attract 3,400 new daily riders to Toronto’s transit system every weekday.” On the other hand, the City claims, “Service improvements from the SmartTrack Stations Program will provide walkable access to rail service for 83,000 residents and 91,000 jobs. The five new stations are projected to bring approximately 110,000 new daily riders by 2031 to the rail network and reduce congestion on the roads and emissions throughout the region.” 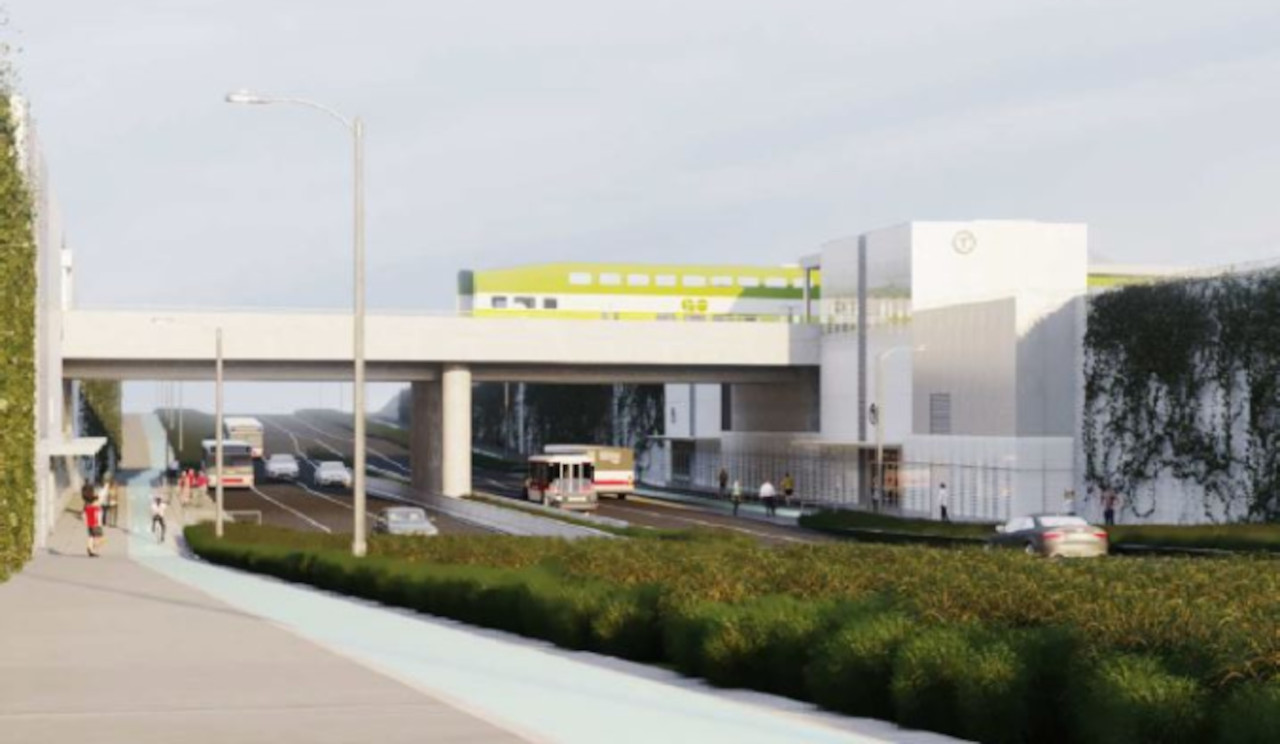 The plan includes fewer stations and less frequent service than Tory’s first mayoral campaign team envisioned. However, the new stations are now part of the Metrolinx GO Expansion program, meaning that GO trains would likely only operate through the new stations about “every 15 minutes or better”—a far cry from the subway-like frequency the mayor originally promised.

The City had already agreed to drop two stations from SmartTrack, due to their proximity to future subway stations that are part of Ontario’s proposal to develop several rapid-transit lines in Toronto. According to an earlier Ontario news release, “The SmartTrack Stations Program has been updated to reflect the Province’s ongoing work to build the Ontario Line and Scarborough Subway Extension priority transit projects. These two priority subway lines include stations that will provide improved, higher frequency subway service for the communities and riders served…” by the original SmartTrack proposal. The City is removing the Lawrence-Kennedy station from the plan because it’s close to the site of the future Lawrence East station on an extension of the Toronto Transit Commission’s Line 2 subway, while the future Gerrard Station on the Ontario Line would have shared the same site as the original Smart-Track Gerrard-Carlaw station. Removing the duplicated stations will also allow GO Trains to complete their routes in a shorter time and deliver their riders faster.

SmartTrack now also includes the Bloor-Lansdowne station, which Metrolinx had already proposed building on its own. This change means that the City, rather than the Province, pays for its construction.

The five new stations are: Finch-Kennedy; East Harbour; King-Liberty; Bloor-Lansdowne; and St Clair-Old Weston. (Station names may be altered before they open to passengers.)

On Finch Avenue East between Milliken Boulevard and Midland Avenue, plans for Finch-Kennedy Station include a ‘road-rail grade separation’—a bridge—allowing road vehicles to pass under the rail corridor. Passengers can transfer between Stouffville-line trains and TTC buses on Finch. The station includes canopies and heated shelters, while bike parking and accessible drop-off areas will make getting to the station easy.

The sole SmartTrack stop station that will be the focus of a transit-oriented community, East Harbour Station, lies between the Don Valley Parkway and Eastern Avenue, at the crossing of the future Broadview Avenue extension. Likely to be a major transit hub, passengers aboard Lakeshore-East line trains can transfer to the future Ontario Line and streetcars on Broadview. 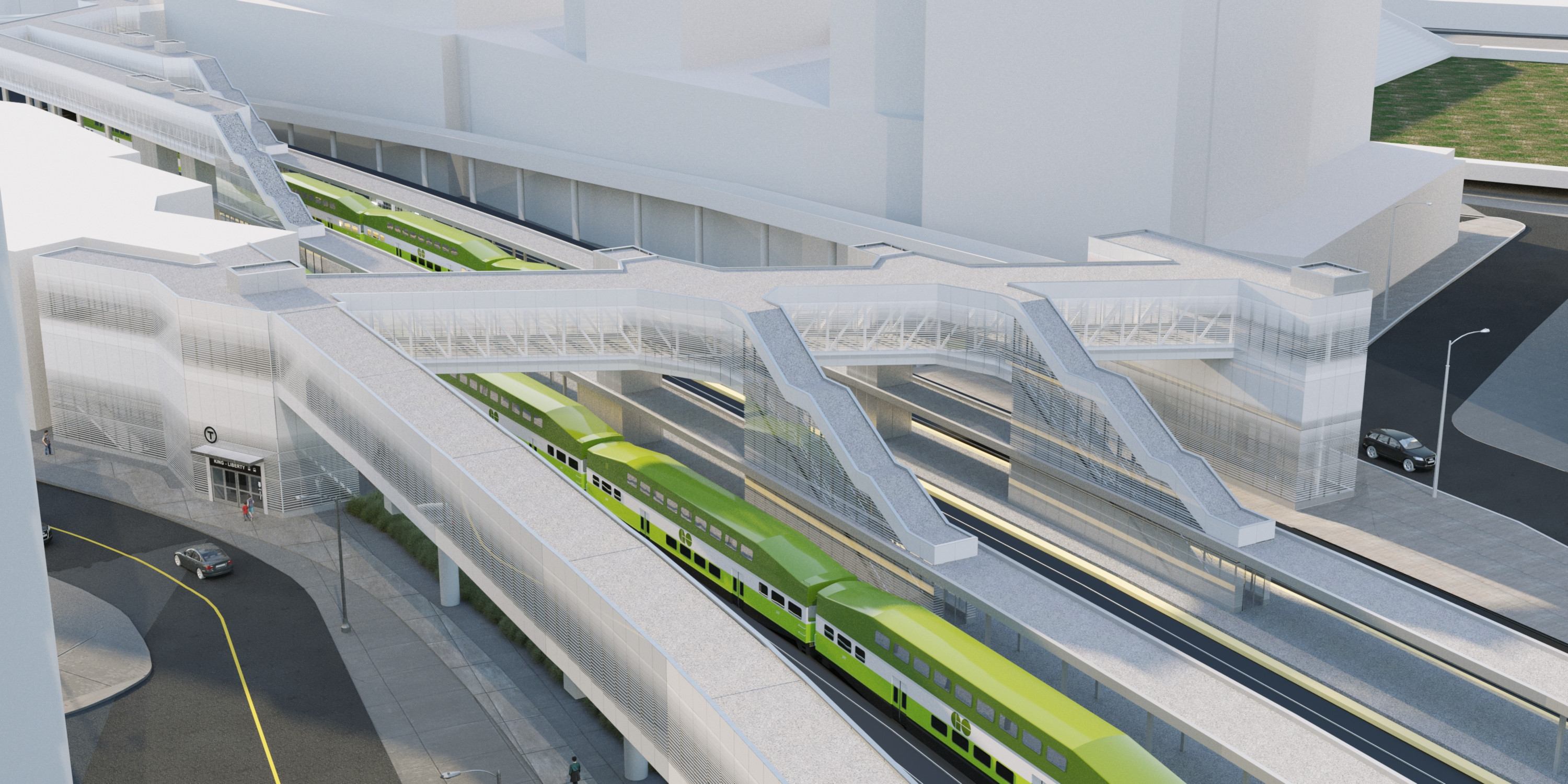 King-Liberty Station is on the north side of King Street West, between Joe Shuster Way and Sudbury Street. The station will feature an enclosed pedestrian bridge connecting King Street to the platforms and a second pedestrian bridge connecting the platforms to Sudbury and Joe Shuster, improving connections between neighbourhoods.

Bloor-Lansdowne Station, on Bloor Street West, west of St Helen’s Avenue on the Barrie GO line, will feature bike parking, a lower entrance at street level off Bloor, and an upper-level platform, a plaza, landscaping at the platform level, and a tunnel connecting the platforms to a multi-use path from along the north side of Bloor toward Dundas Street West. Planners intend to route this path beside the rail corridor and connect to the West Toronto Railpath. 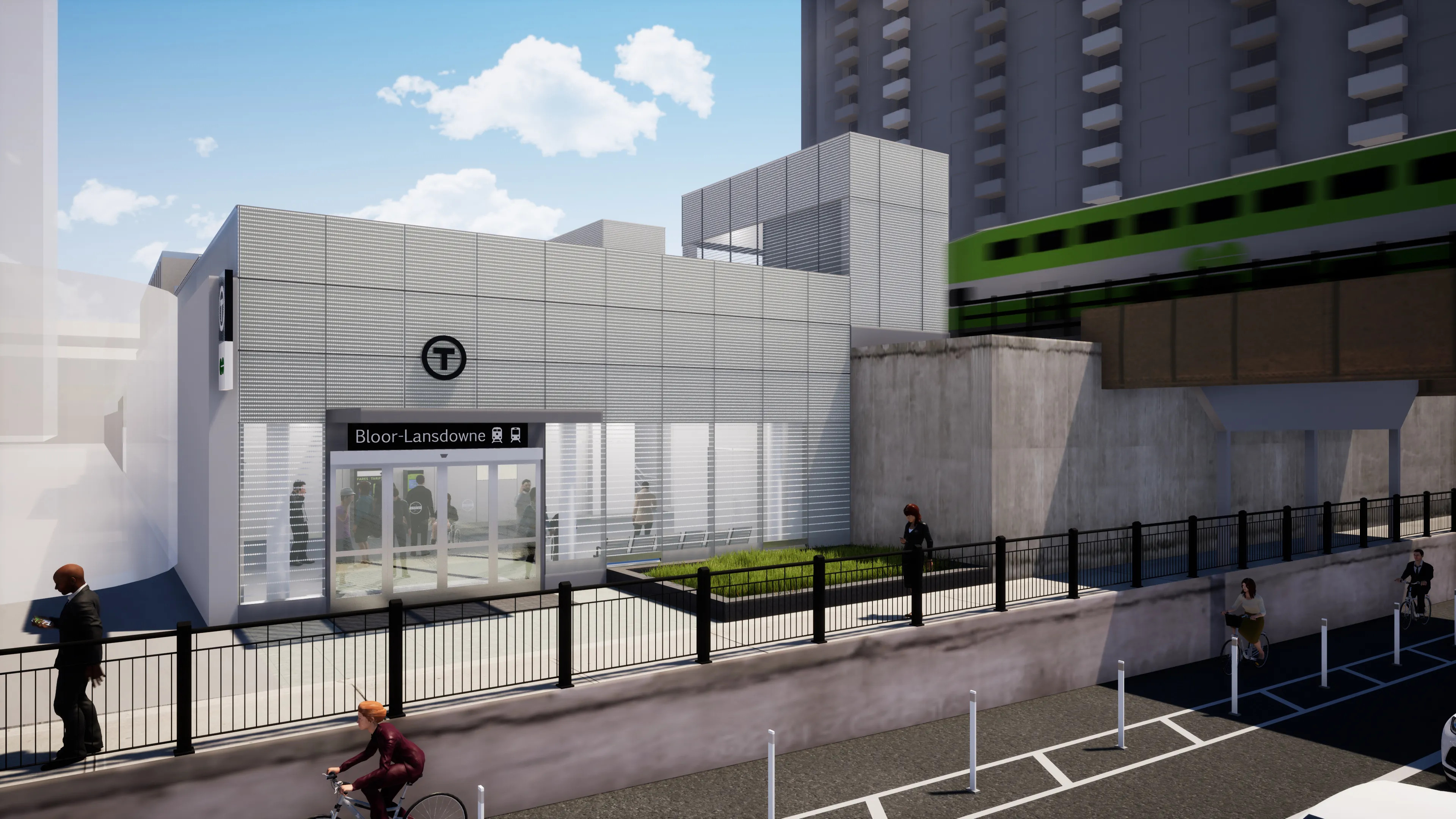 In a public announcement on May 27, 2014, mayoralty candidate John Tory unveiled his plan for a “surface subway” to run on GO Transit rail corridors. The future mayor claimed that the $8-billion line would be operating in seven years. The mayor also proposed charging potential passengers TTC fares to attract as many riders as possible and relieve pressure on TTC services. 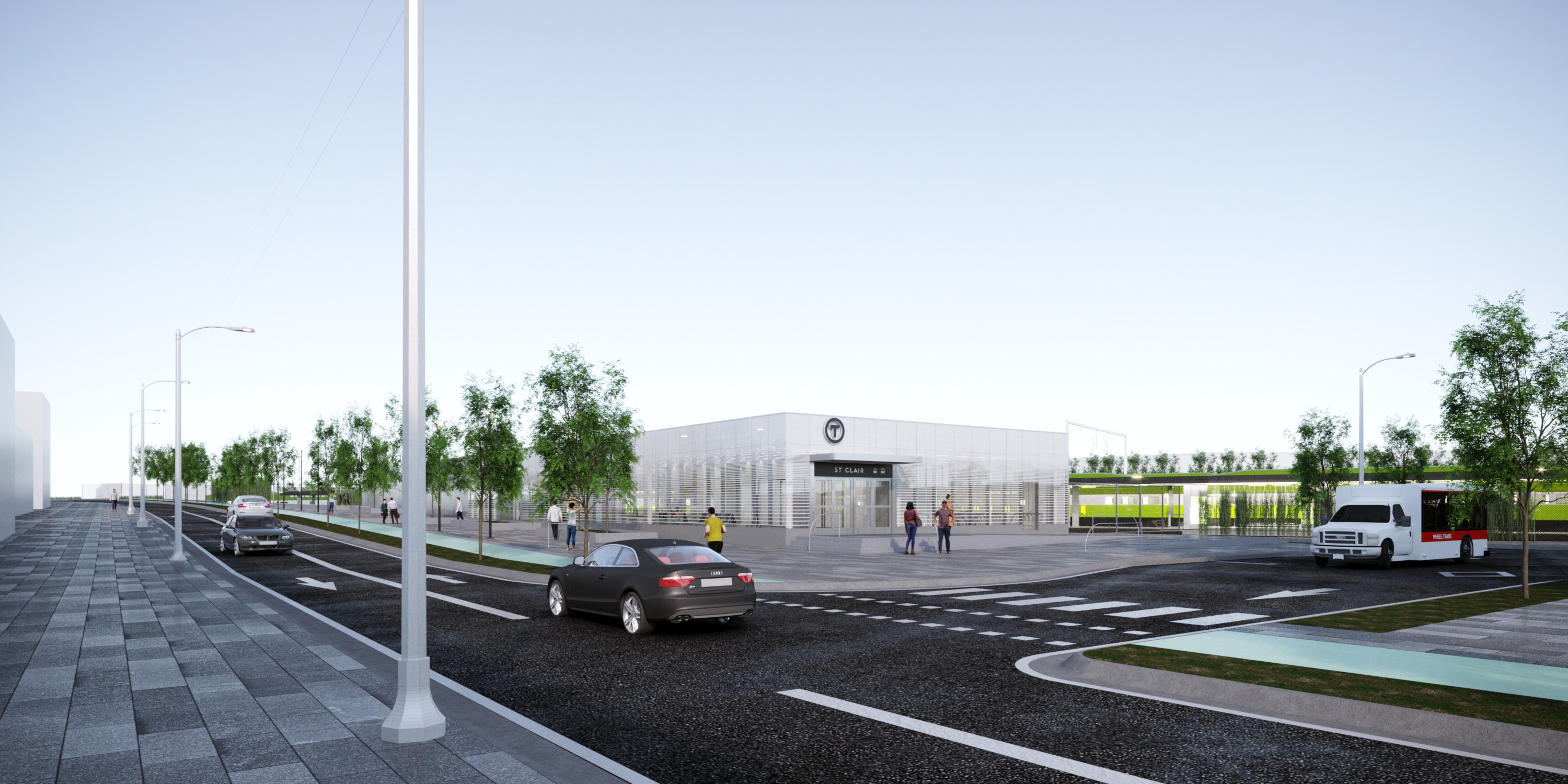 Originally, the SmartTrack route would have extended from Toronto Pearson International Airport to Union Station, east into Scarborough, and north to Unionville in York Region with 22 new stops, mostly on GO tracks. However, the plan also suggested heavy-rail trains along Eglinton Avenue West from Mount Dennis at the end of the Crosstown LRT line to the airport and a future transit hub there.

After Tory’s successful run for mayor, the plan began to devolve. Council agreed to remove the Eglinton West component and replace it with the future Eglinton West light rail extension beyond the future Mount Dennis LRT / GO station. 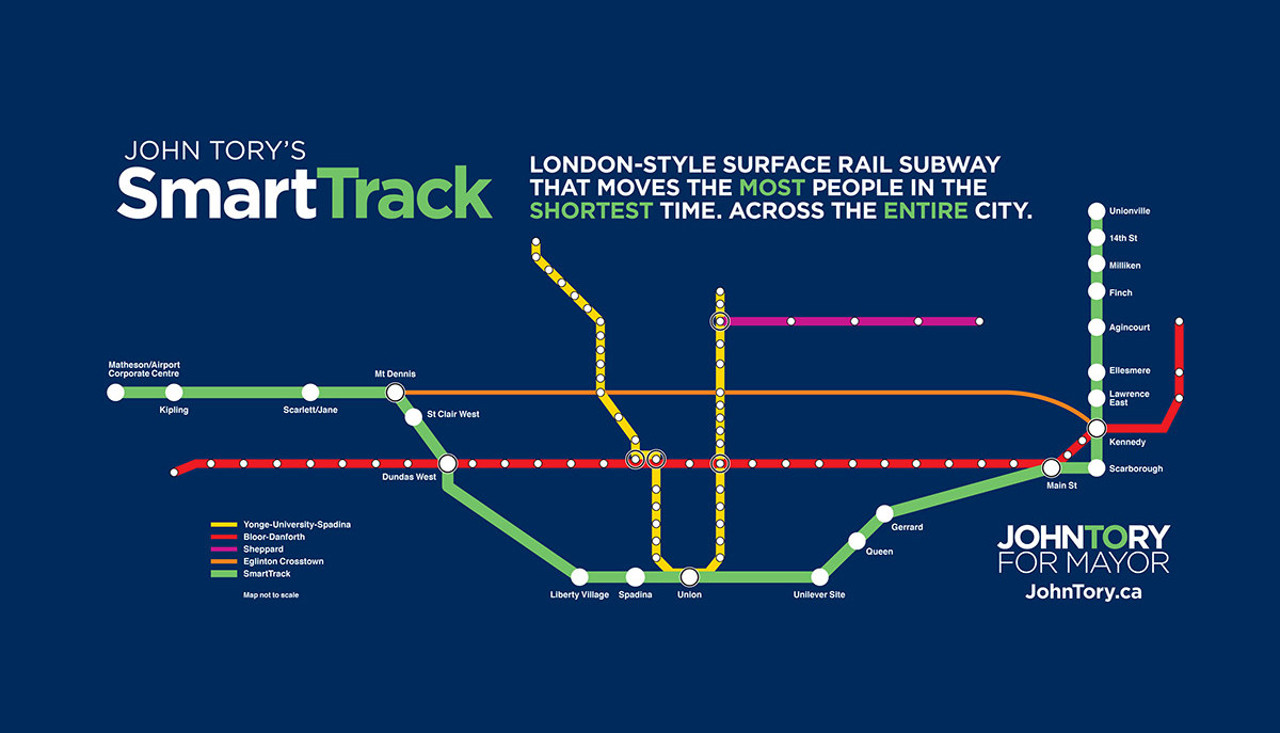 In 2014, candidate John Tory presented this plan for SmartTrack as part of his mayoral-campaign platform. Image, John Tory campaign

In 2016, the Province and the City established principles with respect to cost-sharing on SmartTrack and other transit-expansion initiatives. In April, 2018, City Council approved a contribution of as much as $1.463 billion towards the program and requested Metrolinx to proceed with procurement. The Province subsequently halted the stations’ procurement in December, 2018 with the intention of delivering them through a market-driven transit-oriented development delivery strategy. In February 2021, City Council voted in favour of revising the “Ontario-Toronto Agreement in Principle” to include the program.

What do you think of the SmartTrack Stations Program? Add your comments about the project in the space provided on this page, or join the discussion in our dedicated Forum thread.