Three Building Mixed-Use Proposal Evolves at Kipling and The Queensway

A plan for a three-building condo complex on the northwest corner of Kipling Avenue and The Queensway in Etobicoke has evolved with a revised submission to the City of Toronto. The 2.91-acre site at 1306 The Queensway which formerly housed two car dealerships, is owned by KingSett Capital who have engaged Giannone Petricone Associates to design the redevelopment. The newer version is seen below left, the original to the right. 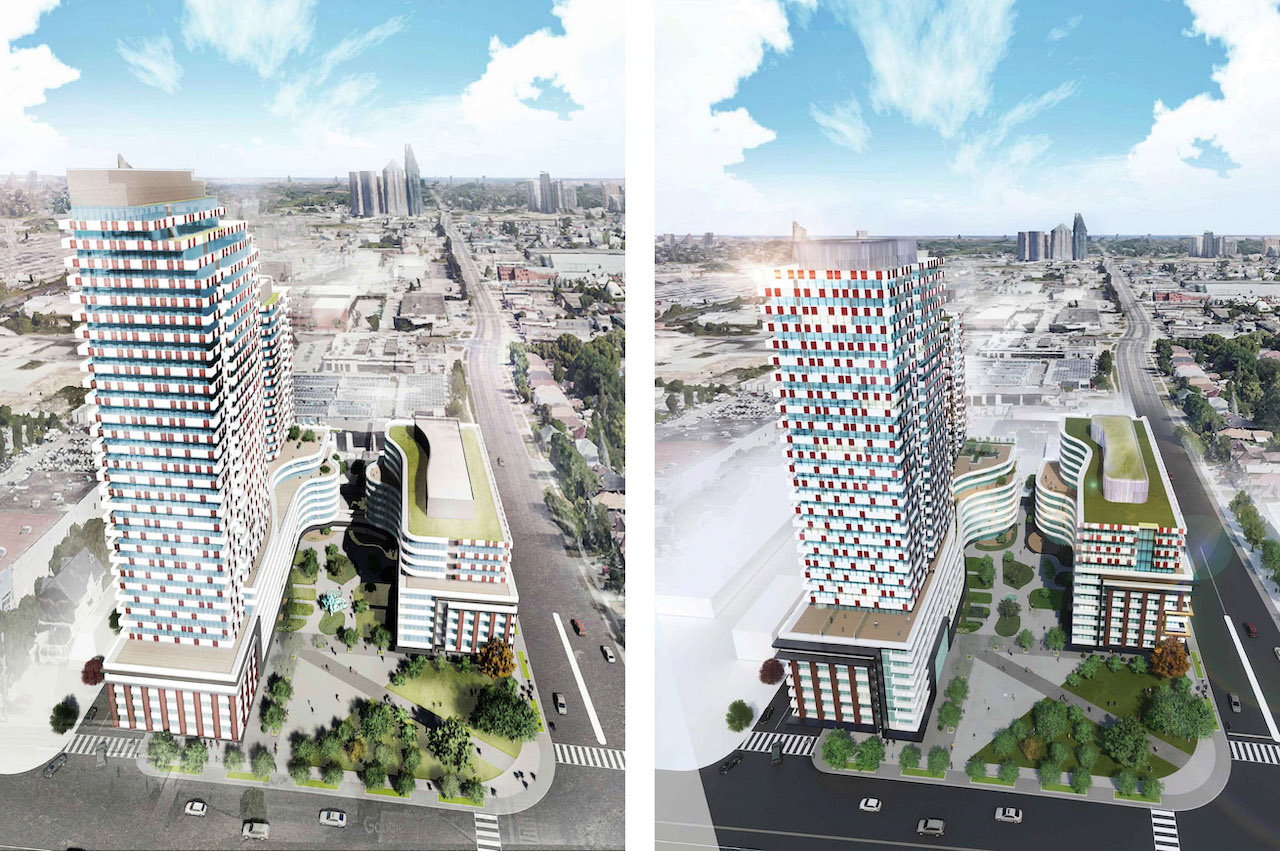 Comparing the revised proposal to the original at 1306 The Queensway, designed by Giannone Petricone Associates for

The original proposal from December, 2019, seen above right and in greater detail immediately below, was submitted with the tallest tower at 31 storeys and 90 metres in height, while a shorter 24-storey, 77-metre tower would rise to its north. On the east side of the site was a 12-storey, 43.6-metre-tall mid-rise building. The corner of Kipling and The Queensway would be occupied by a POPS, or Privately-Owned Publicly accessible Space, linking the intersection to a central courtyard between the buildings. 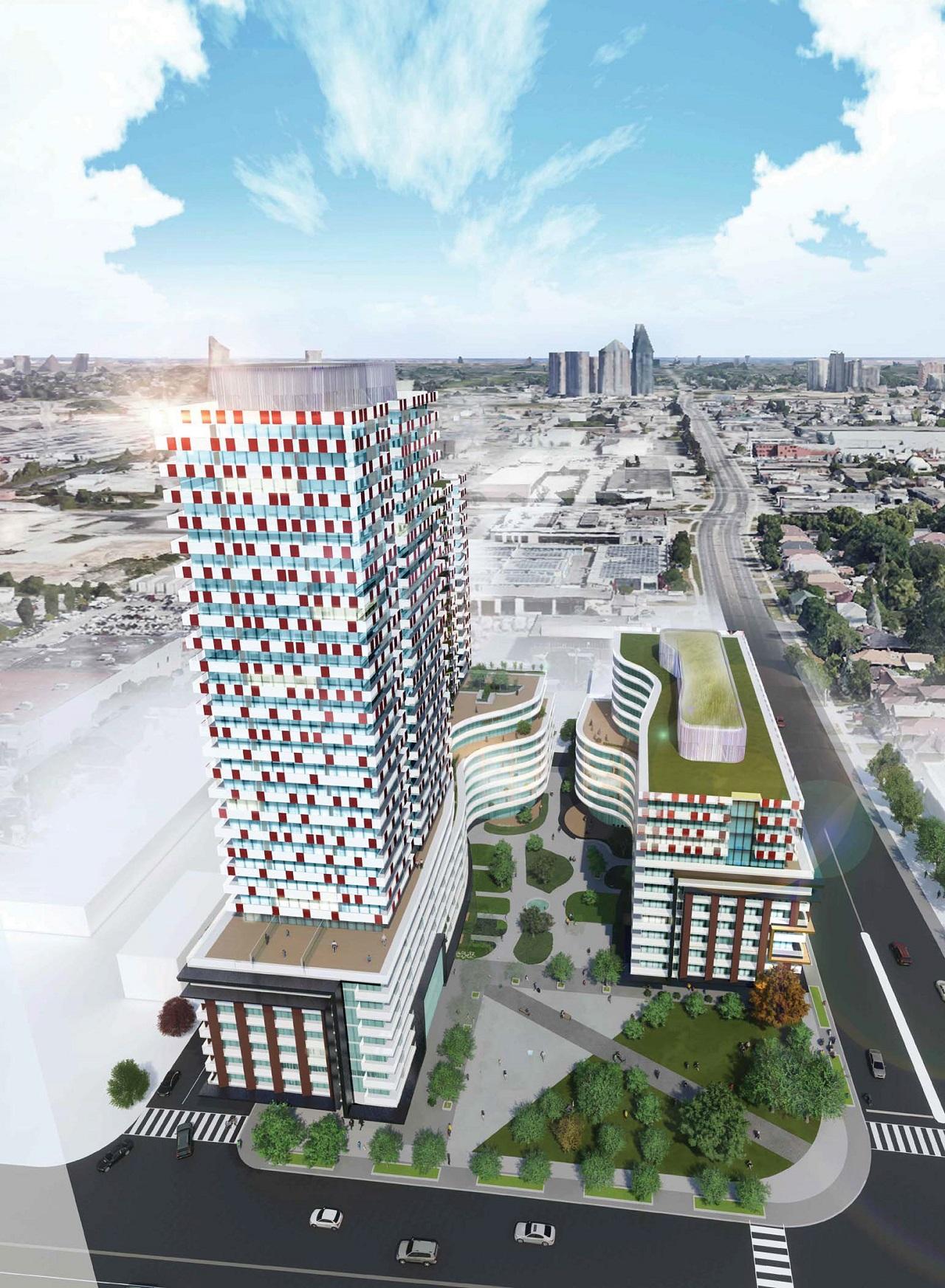 Looking north to the original proposal for 1306 The Queensway, Toronto, designed by Giannone Petricone Associates for KingSett Capital

The complex was planned with a total gross floor area of 69,340 m², largely consisting of residential space in the form of 845 units across the three towers, proposed in a mix of 95 studios, 491 one-bedrooms, 167 two-bedrooms, and 92 three-bedrooms. 30% of the proposed units would include multiple bedrooms, with the City pressing new developments to include family-sized units.

Following the City’s initial review and community feedback, the development has changed somewhat in a December, 2020 resubmission. Seen at left in the comparison image at the top of the article and in more detail immediately below, in the revised proposal with the tallest tower is now 4 storeys taller at 35 storeys and 113.3 metres in height, the tower to its north is still 24 storeys although now 2.7 metres higher at 79.7 metres, and the mid-rise facing Kipling Avenue has dropped from 12-storeys/43.6 metres tall to 10 storeys/36.5 metres. Podium heights have also changed all-round to better conform with angular planes, with the largest floor-plates now going as high as 6 storeys before the buildings step back from the street instead of at 8 storeys in the initial plan. Similarly, the uppermost 4 storeys of the tallest tower are terrace to also conform to angular planes so as to limit shadowing. 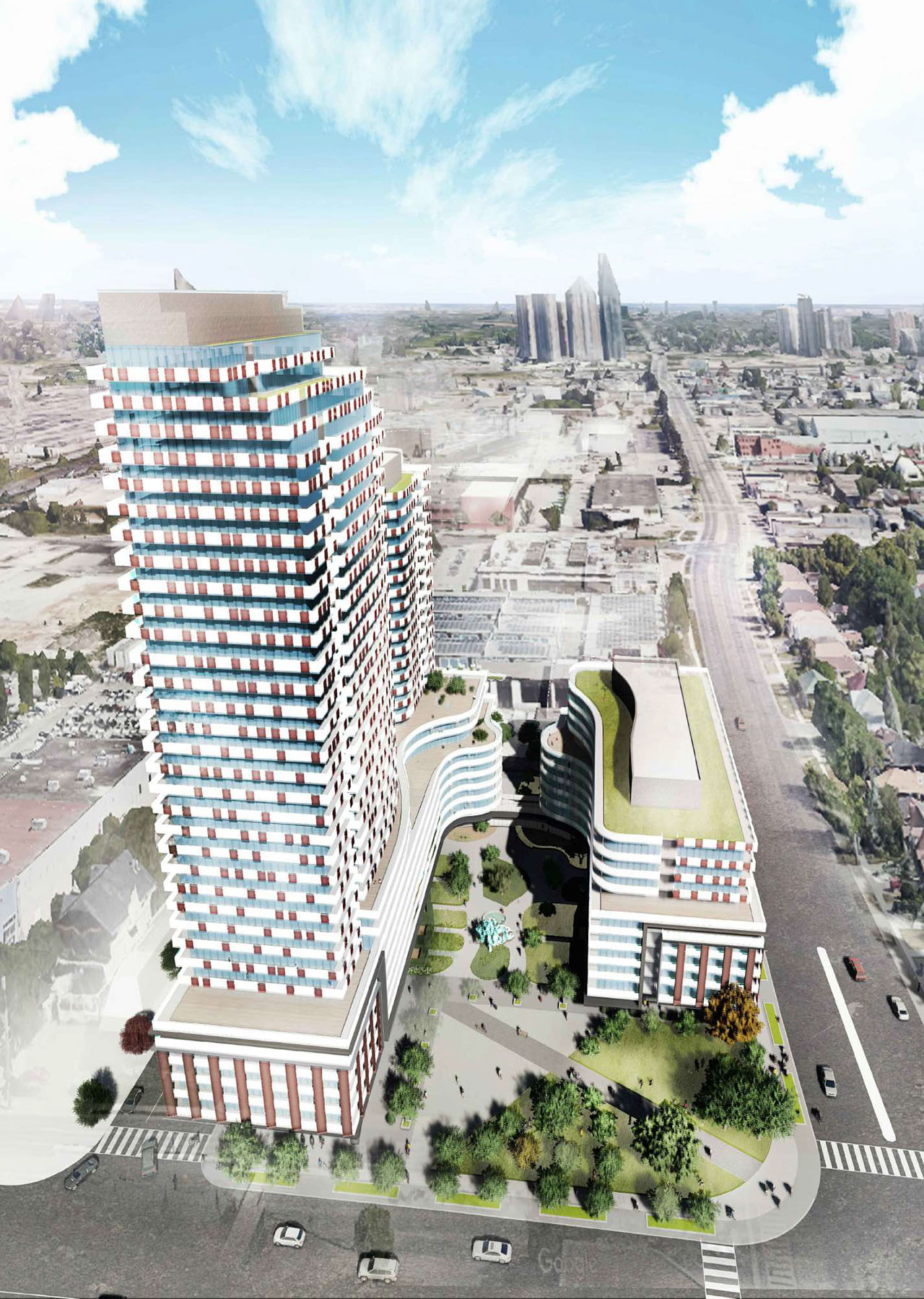 Looking north to the revised proposal for 1306 The Queensway, designed by Giannone Petricone Associates for

With the shifting of some density away from the mid-rise on Kipling to the 35-storey tower, the development retains a similar number of proposed units, now 840 instead of 845, while the total gross floor area has dropped from 69,340 m² to 67,458 m². The slight decrease in total space means the the average unit area has dropped by about 2% over the year while the unit breakdown has shifted a bit, now with 93 studios, 467 one-bedrooms, 193 two-bedrooms, and 87 three-bedrooms. Over 10% of the suites are still three bedrooms, but two-bedrooms suites now make up a larger chunk of the total 30% of suites that are multi-bedroom, achieving a threshold that the City pushes for. 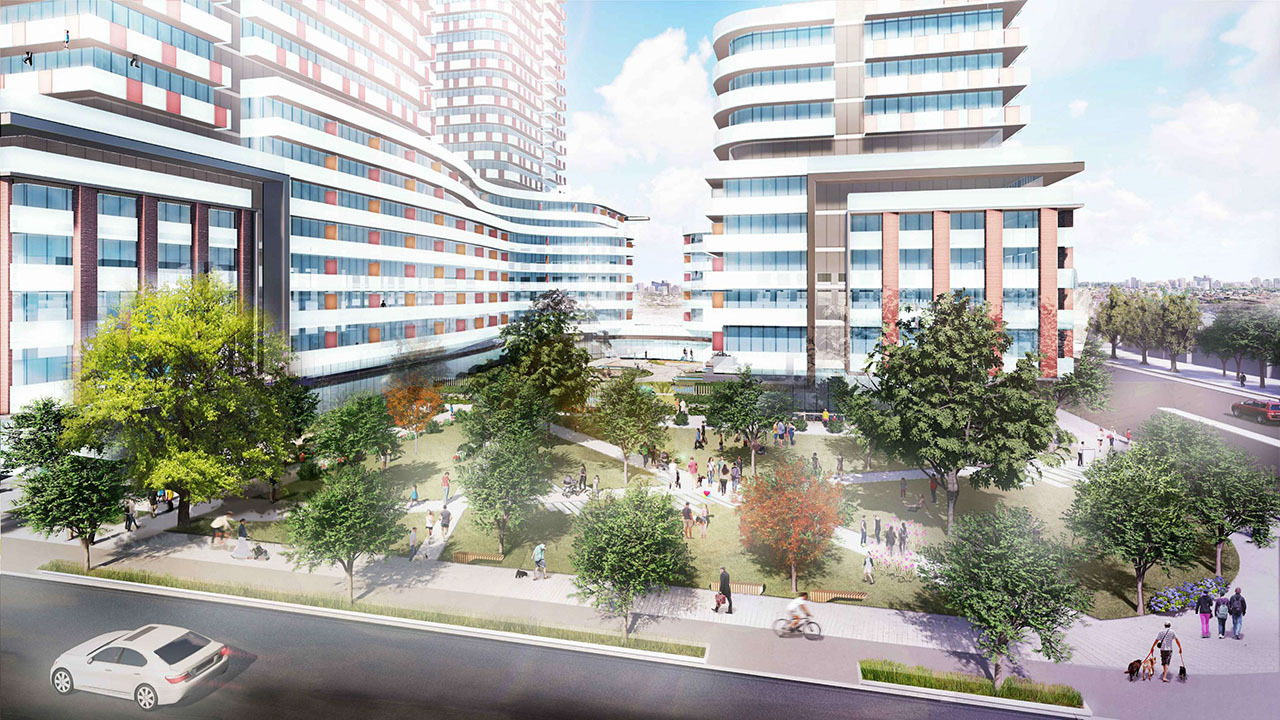 Looking into the park at the revised proposal for 1306 The Queensway, Toronto, designed by Giannone Petricone Associates for KingSett Capital

Up from 879 m² in the original proposed set aside for ground-floor retail space, the revised proposal now has 1,018 m² of retail space—facing Kipling Avenue and the POPS beside The Queensway—to better serve residents and neighbours of the complex.

The size of the underground garage has been reduced. Closer to a 1:1 unit to parking space ratio in the original proposal, the three-level underground garage drops from 835 spaces to 756; 630 of these would be for residents, while 126 are for visitors. The drop in proposed spaces reflects a trend across Toronto of fewer parking spaces selling in new developments. At the same time, the development provides all the bicycle storage spaces for residents required by the City, while now also providing both short-term and long-term bicycle spaces related to the retail onsite, which the City does not require.

The development is a short bus ride south of Kipling subway station, and is also served by Queensway buses that go west to Sherway Gardens or east to Keele subway station via the Humber Loop.