The following graphic presents data on the average and median monthly asking rents for GTA rental listings (all property types: basement apartments, rental apartments, condo apartments, townhouses and single-family homes) from January 2020 to April 2021 based on listings on TorontoRentals.com. 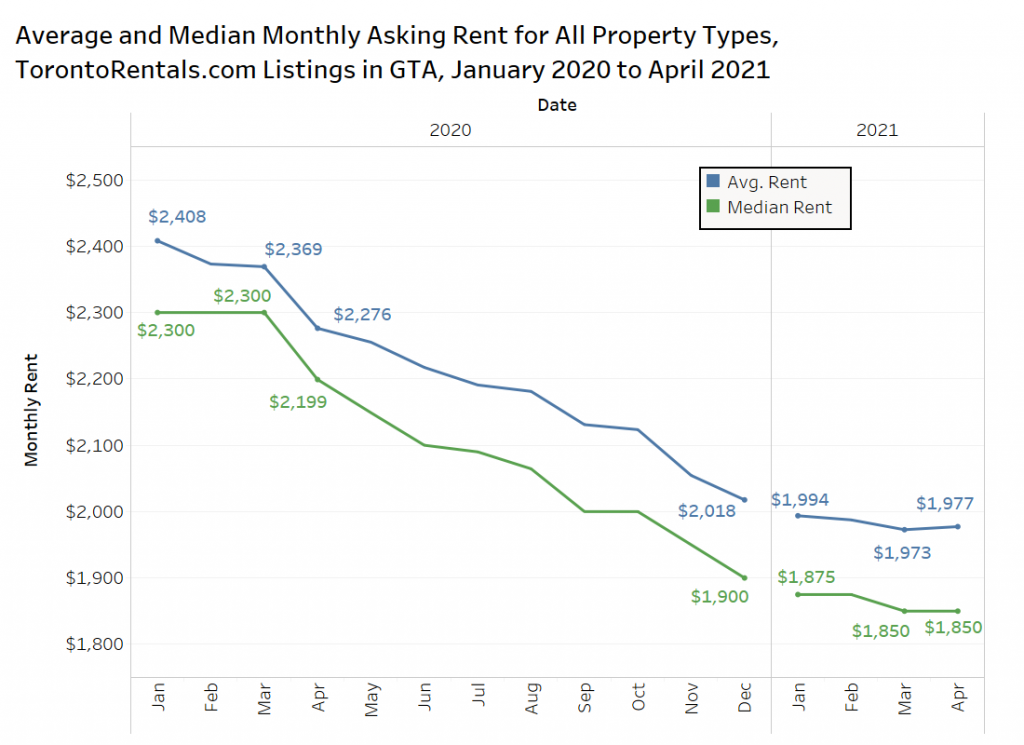 The average rent for all property types was $1,977 per month in April 2021.  The dramatic declines in average rental rates over the last year appear to have leveled off.

Per-Square-Foot Rent Levels in the GTA

This graphic looks at the average rent per square foot for all property types in the GTA from January 2020 to April 2021. 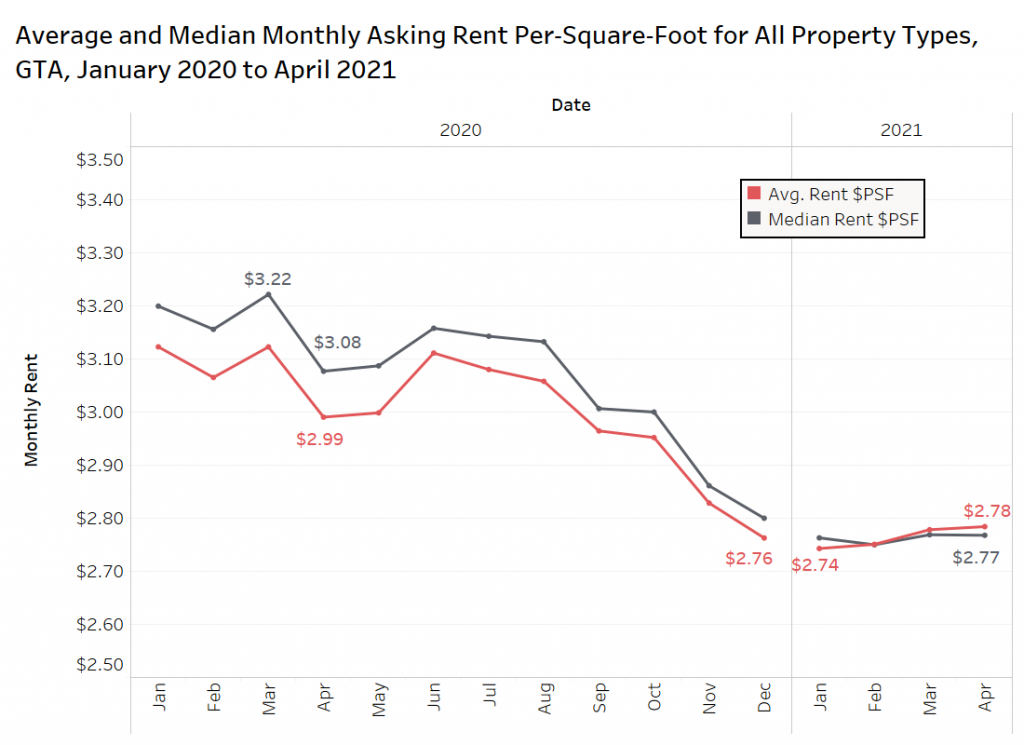 The figure below presents data on the average rent and average rent per square foot for condo and rental apartments by the furnished level over the last 13 months in the GTA. 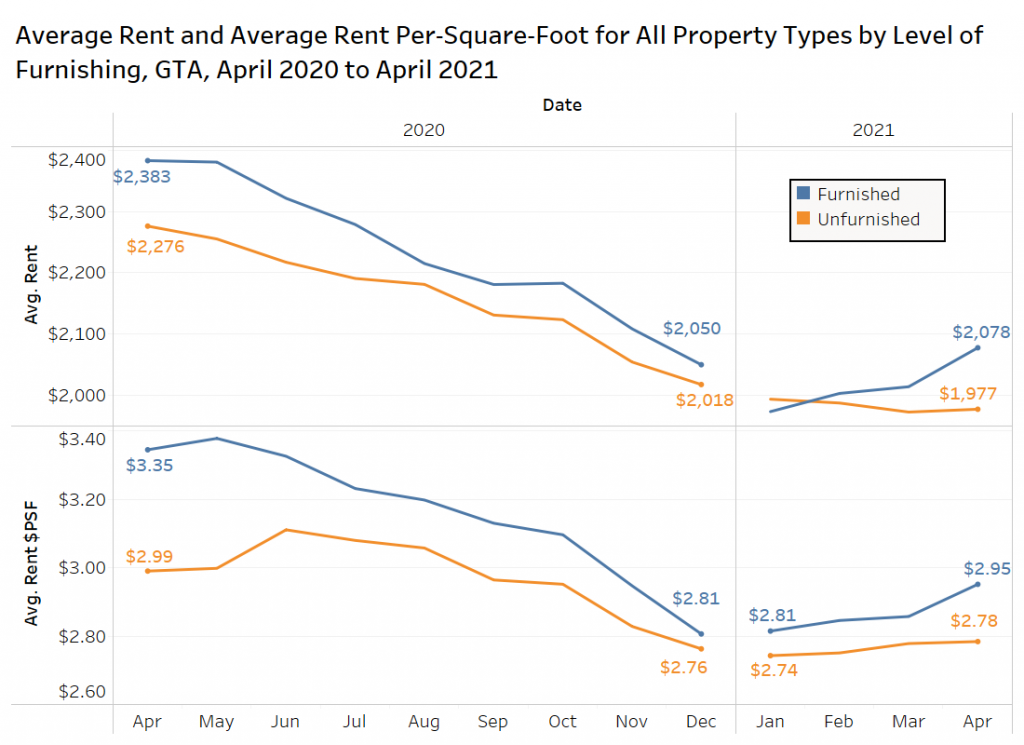 Unit Mix by Bedroom Type in the GTA

One of the factors contributing to the lower rent levels in the GTA is the high demand for large properties. These units are being leased quickly, and the number of three-, four- and five-bedroom homes for lease is much lower year to date in 2021 in comparison to 2020 and 2019.

The pie charts below show the breakdown of listings on TorontoRentals.com in the GTA by bedroom type during the first four months of the year in 2019, 2020 and 2021 (six- and seven-bedroom properties were eliminated).

Average Rental Rates by Bedroom Type in the GTA

The figure below presents data on the average rent by bedroom type in the GTA from April 2020 to April 2021 for all property types. Five- and six-bedroom units have been removed from the chart. 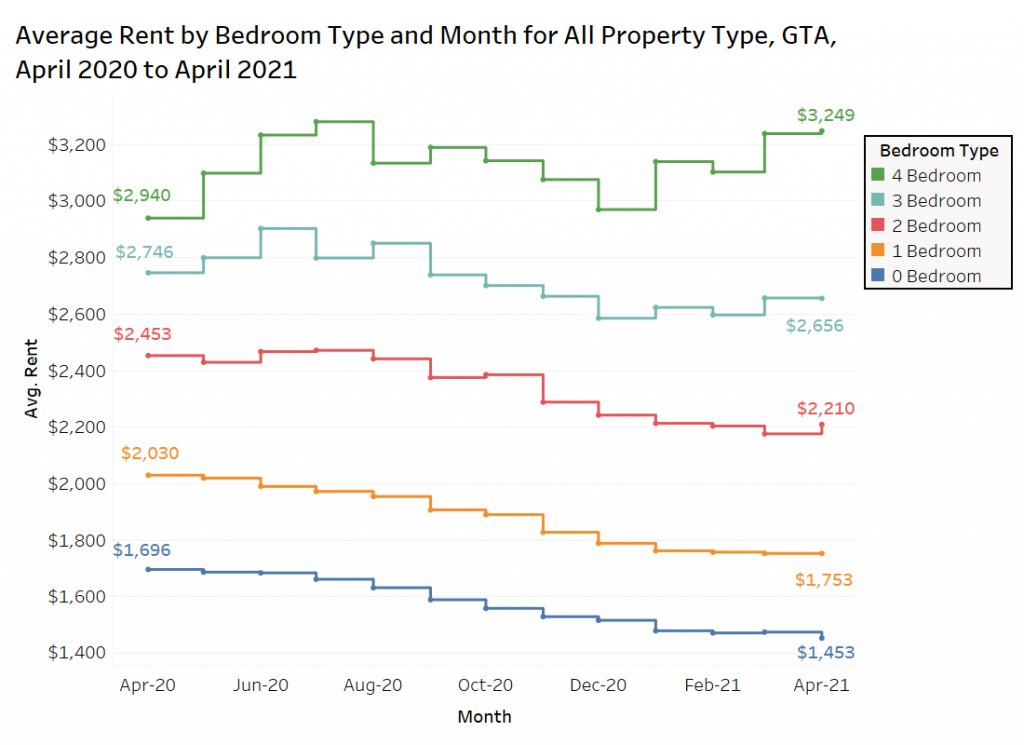 The rental rates for different bedroom types have diverged over the course of the past year. The average rent for four-bedroom units (primarily single-family dwellings) has increased, while the average rent for smaller units has decreased. Tenants are seeking larger properties while they work from home and their children learn virtually. With the stay-at-home order in place, many prospective tenants are looking for a property with a back yard.

Four-bedroom units experienced an annual increase in average rent of 10% in April 2021.

Average Rental Rates by Property Type in the GTA

The following graphic presents GTA data on the average rent for single-family homes, condominium apartments, townhouses and rental apartments in March and April of 2020 and 2021 via TorontoRentals.com listings. 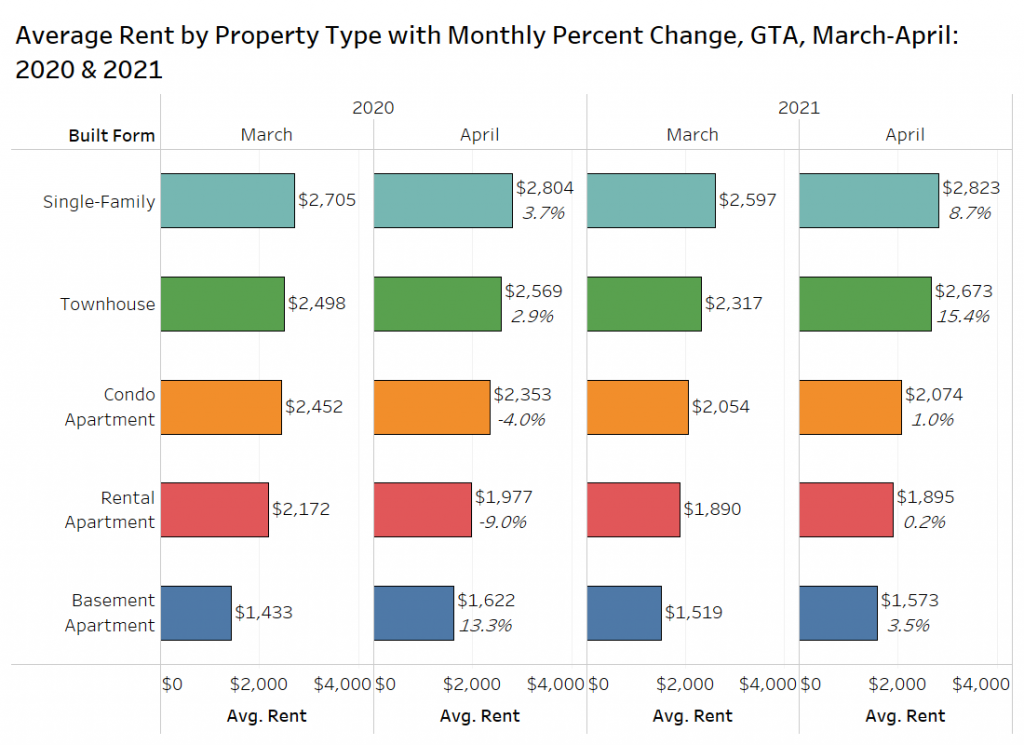 The average rent for a single family home in April 2021 was $2,823 per month, which represented a month-over-month increase of 8.7%, and a year-over-year increase of 0.6%. Single-detached rental rates are volatile because the homes can range widely in size, and there are different lot frontages and depths which play a factor in the asking rents.

The average rent for a townhouse in April 2021 was $2,673 per month, a month-over-month increase of 15.4%, the largest increase of all the property types. The sample size of townhouses is relatively small, leading to monthly volatility. The average townhouse was listed for 4% more than a year earlier.

Lastly, the average rent for basement apartments in April 2021 was $1,573 per month. This represents a monthly increase of 3.5%, and a year-over-year decrease of 3%.

The increase in rents overall was not compositional, as rental rates increased across the board.

Average rent for condominium and rental apartments in GTA municipalities in April 2021 is presented below. Toronto is broken up into its former municipalities, prior to amalgamation. 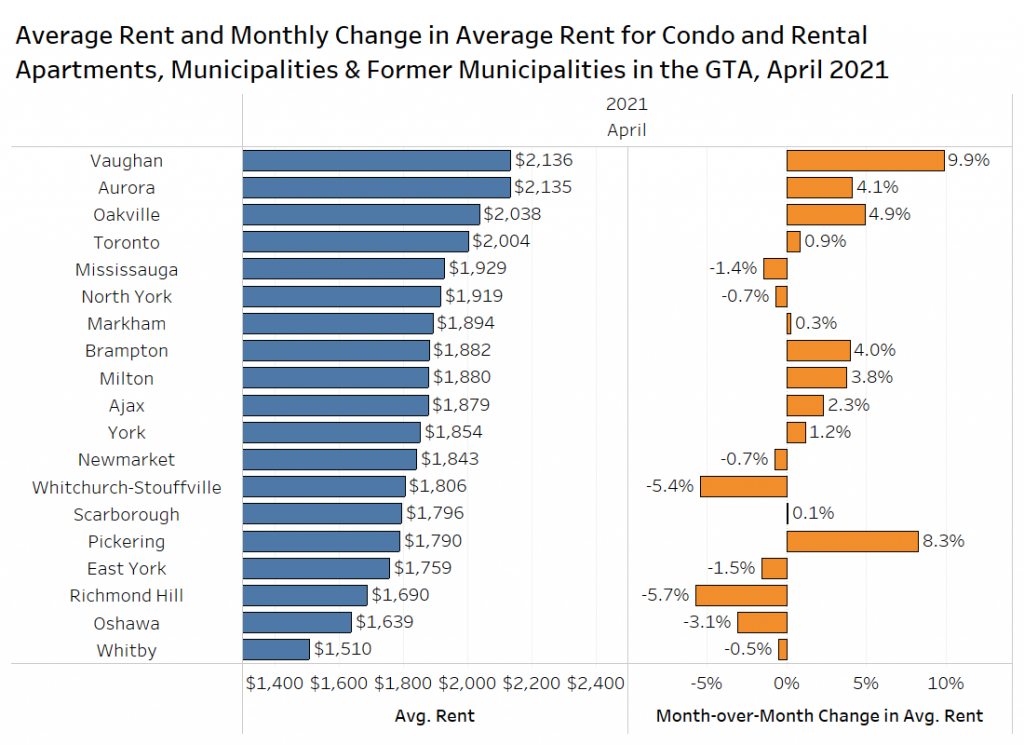 The average rent for a condo or rental apartment in Vaughan has experienced the largest month-to-month increase in April 2021, rising by nearly 10% to $2,136 per month. Pickering was a close second, experiencing a month-over-month increase of 8.3% to $1,790 per month. The sample size of listings in these municipalities is not large, and as a result, their average rental rates can fluctuate monthly.

Toronto, which has a robust sample of listings, grew by just under 1% month over month, and the data indicates that tenant demand is increasing downtown. 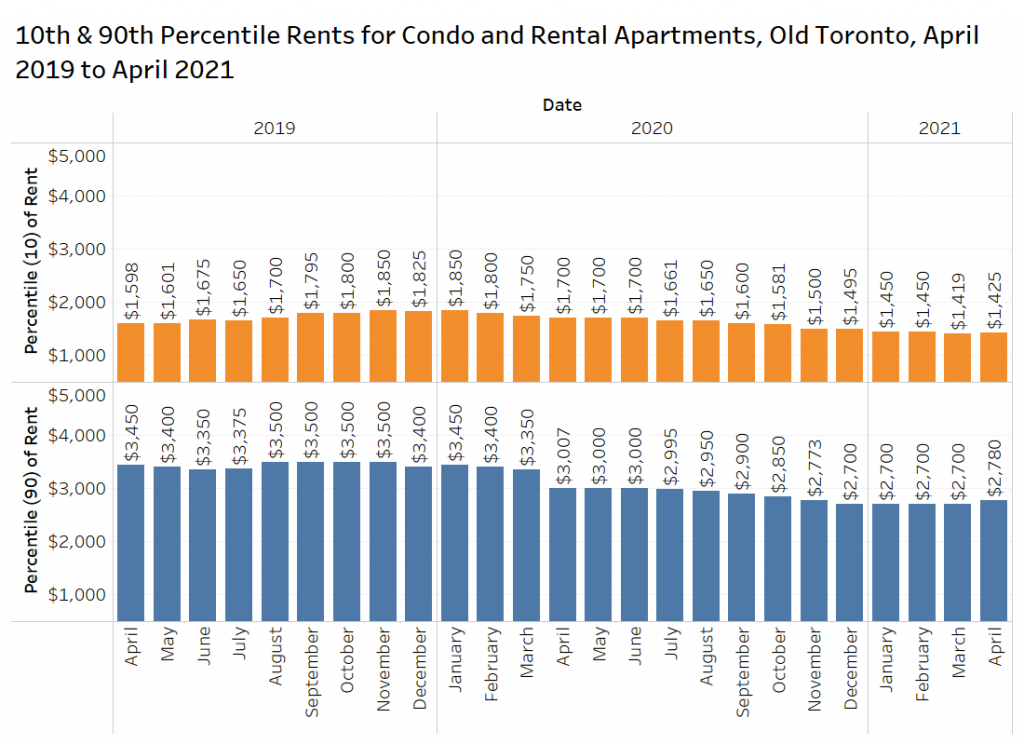 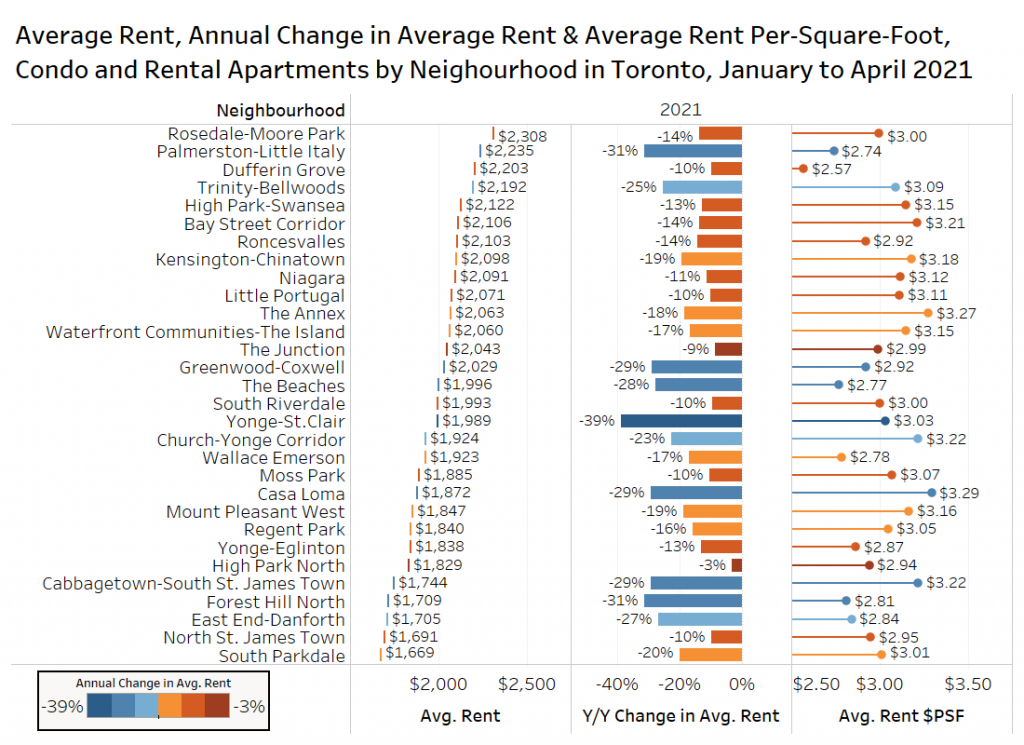 High Park North had the lowest annual decline at 3%, while Yonge-St. Clair experienced the biggest decline at 39%. The composition of the listings plays a factor in movements in the average rent on a monthly basis. If there were a lot of large units for rent last year and a lot of smaller units for lease this year, the average rent is lower, but it may not reflect landlords actually lowering rents.

The chart below looks at condominium and rental apartments with at least 20 listings on TorontoRentals.com in January to April 2020 and the same period this year.

The average rent per square foot year to date is shown, as well as the annual change in rent per foot. 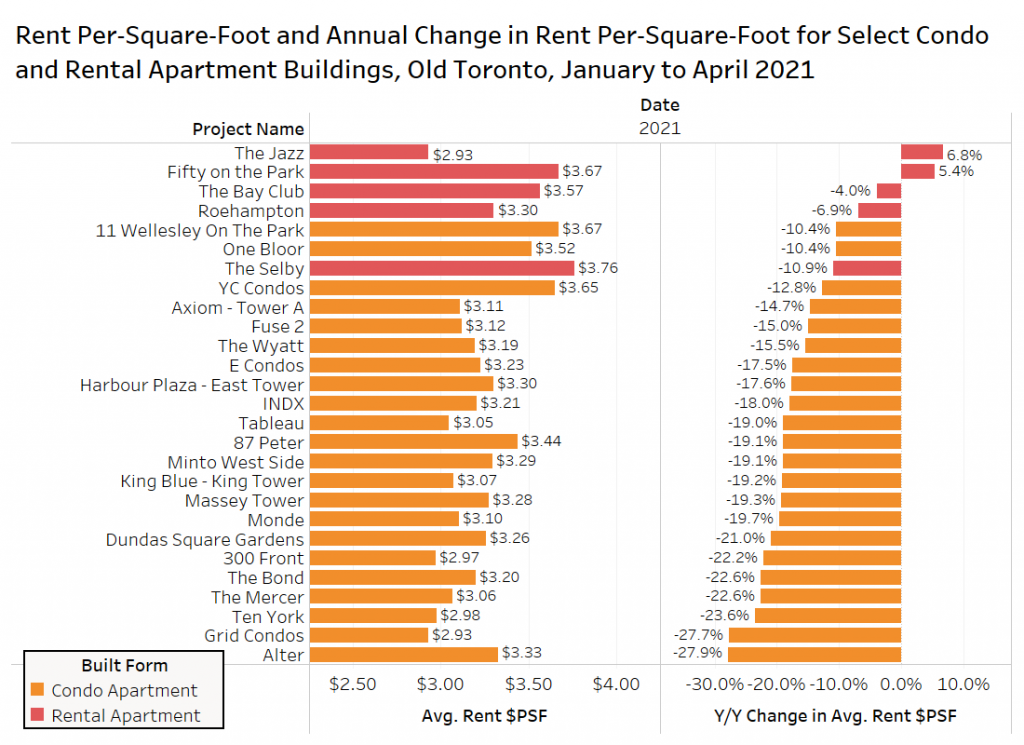 The purpose-built rental apartments are clustered near the top of the list,. These listings are more likely to offer rental incentives.

The only properties to experience a year-over-year increase in average rent per square foot were The Jazz, and Fifty on the Park at 6.8% and 5.4% respectively — both are purpose-built rental apartments.

Covid lockdowns and vaccine setbacks in Toronto have forced many employees to continue working from home. There remains strong demand for larger units in the suburban areas. Rents increased month over month in Vaughan, Aurora, Oakville, Markham, Brampton, Milton, Ajax and Pickering. Average rents declined month over month in North York, but were up slightly in both the former cities of Toronto and Scarborough.

Despite more vaccines getting into arms and an inevitable end of the lockdowns in the GTA, the work-from-home trend looks like it’s here to stay for many workplaces in 2021. This most likely means the rental rates for the smaller units in the downtown area will be slow to recover, while the rental rates for larger units in the suburbs will continue to be popular in the foreseeable future.

Bullpen Research & Consulting and TorontoRentals.com believe rents will start to pick up in the fall, but it won’t be until 2022 that we see a rapid rise in rental rates when the borders are reopened and university students return to the classroom.