The pandemic and its impacts have continued to weigh on the Greater Toronto Area (GTA) rental market. Economic uncertainty, fear of moving for health reasons due to an uptick in positive COVID tests have severely reduced rental demand.

A rent freeze in Ontario for 2021 is another factor that will contribute to less tenant turnover, despite being enticed by lower rents and landlord incentives.

The top panel in the chart below presents data on the average monthly asking rent for GTA rental listings (all property types: basement apartments, rental apartments, condo apartments, townhouses and other single-family homes). 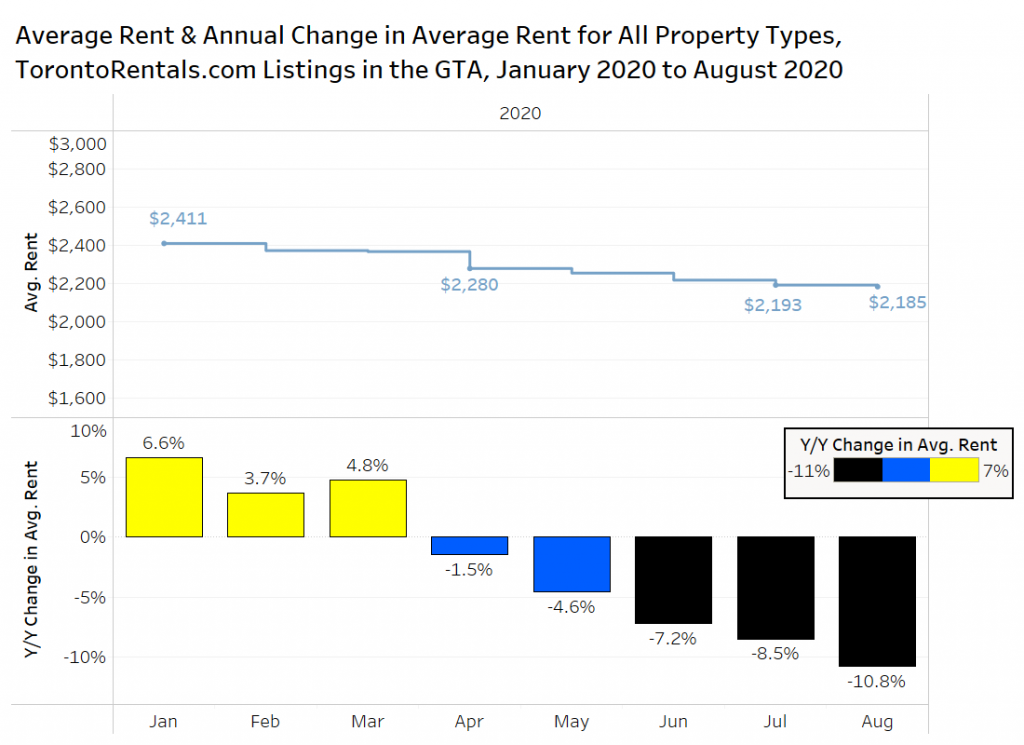 The average rent was $2,185 per month in August, the ninth consecutive monthly decline. The average rent is down 0.4% monthly, and 10.8% year over year (the annual changes are shown in the bottom panel).

The average rent by bedroom type in the GTA from August 2019 to August 2020 is shown in the chart below. The sample size of five-bedroom units is small, which leads to monthly volatility. Six- bedroom units were removed from the chart. 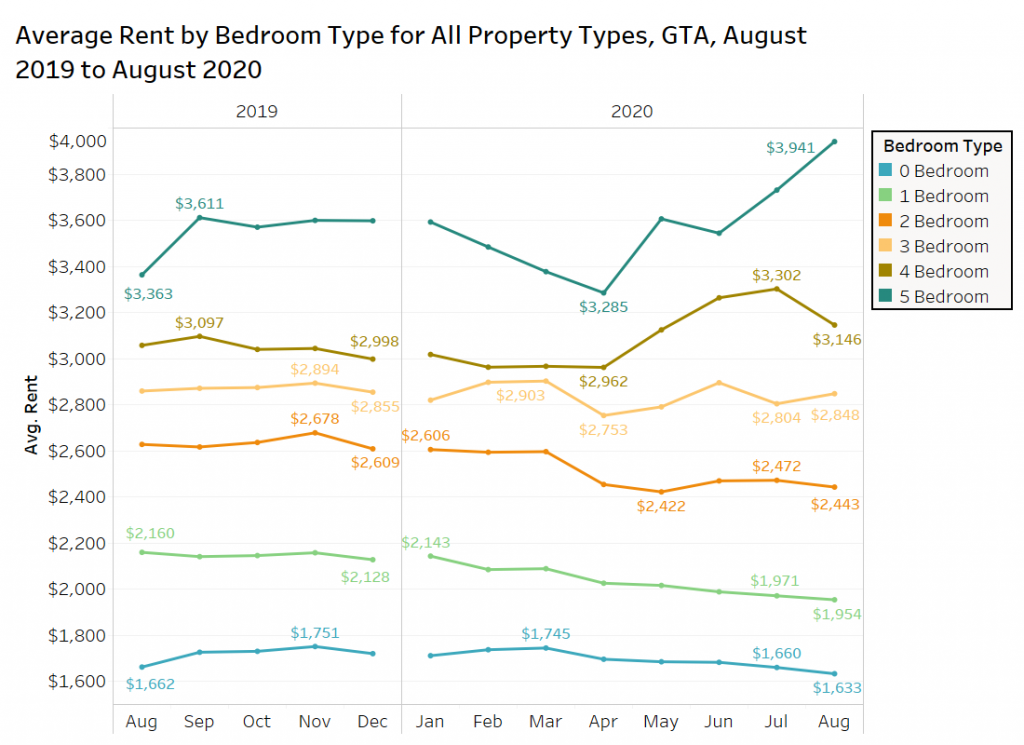 The average asking rent for condominium apartments (orange) and rental apartments (purple), is presented in the chart below for the GTA. 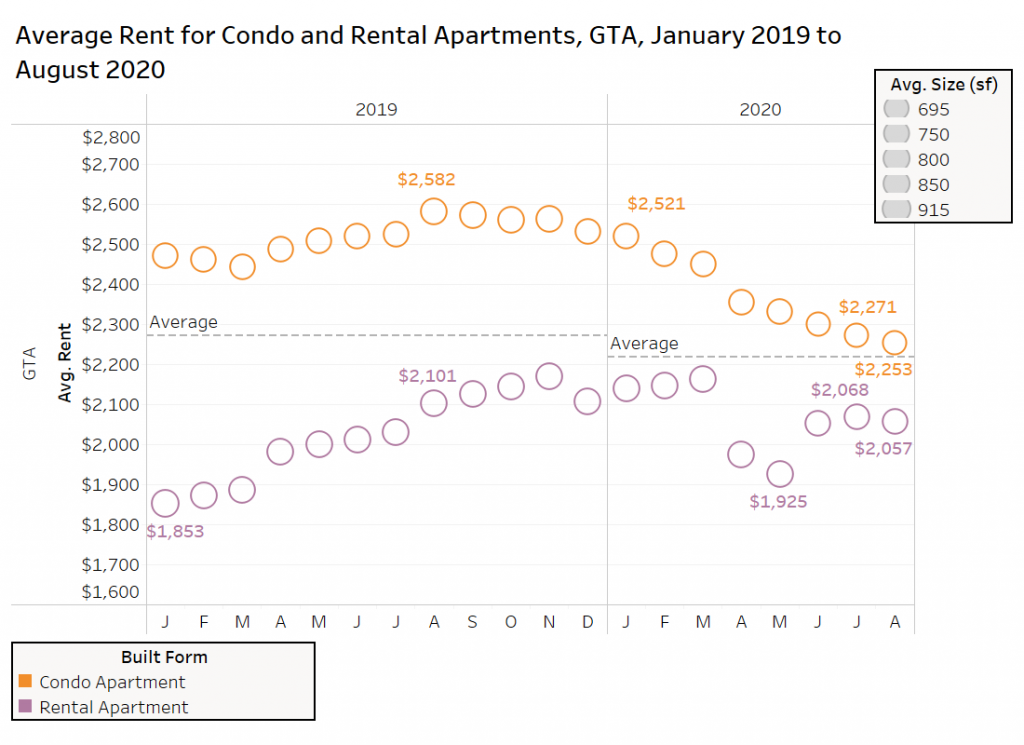 When just focusing on the former CIty of Toronto (pre-amalgamation boundaries – not shown in the chart above), the condo rental market is much worse, with the average rent down 16.0% year over year. Rental apartments have seen average rents drop by 2.9% annually.

The rental market in downtown Toronto is really pulling the GTA averages down. The average rent per square foot for condo and rental apartments in downtown Toronto, Etobicoke, North York, and Mississauga is visualized in the line graphs below. Not all properties listed on TorontoRentals.com have their unit size available, so this data is based on a smaller sample size, and is a straight average, not a weighted average. 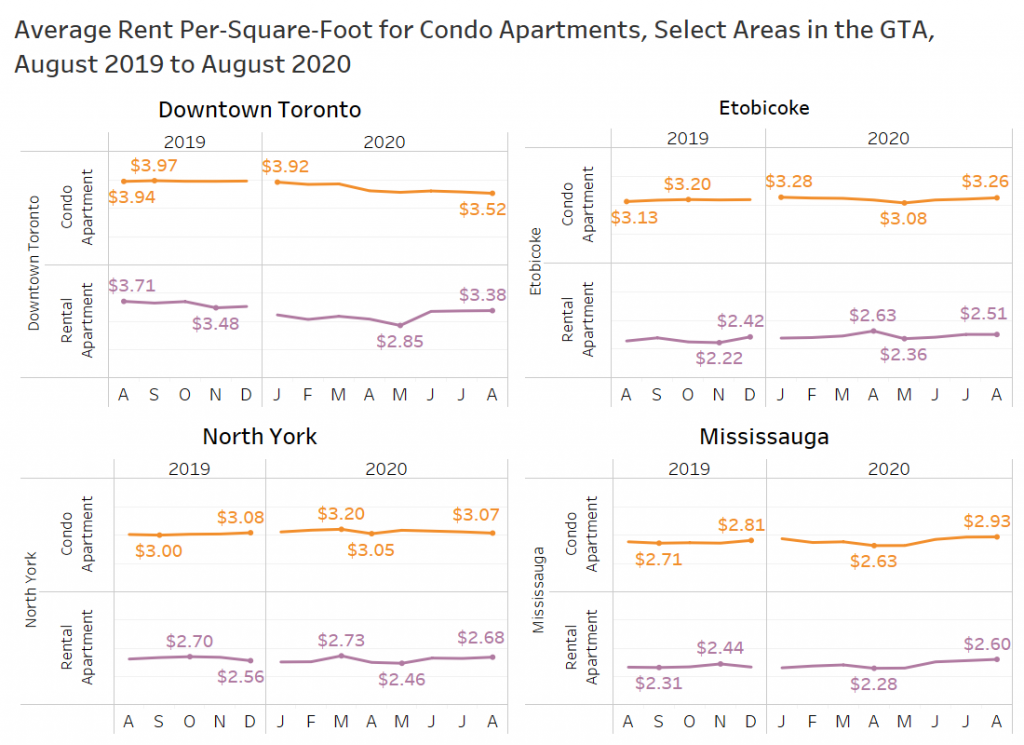 Mississauga has also seen growth, with condos up 6.3% year over year, and rental apartments up a whopping 12.0%. However, the average size of rental units in the August 2019 sample of listings in Mississauga was about 860 square feet, while the sample in August 2020 was 820 square feet. Smaller units typically have higher per-square-foot rents (decreasing marginal utility).

The chart below looks at the average rent by property type in the former City of Toronto over the past 20 months (red circles), the lines represent where the average was on a monthly basis, with the month and average rate for the highest and lowest months marked. August 2020 is highlighted in orange. 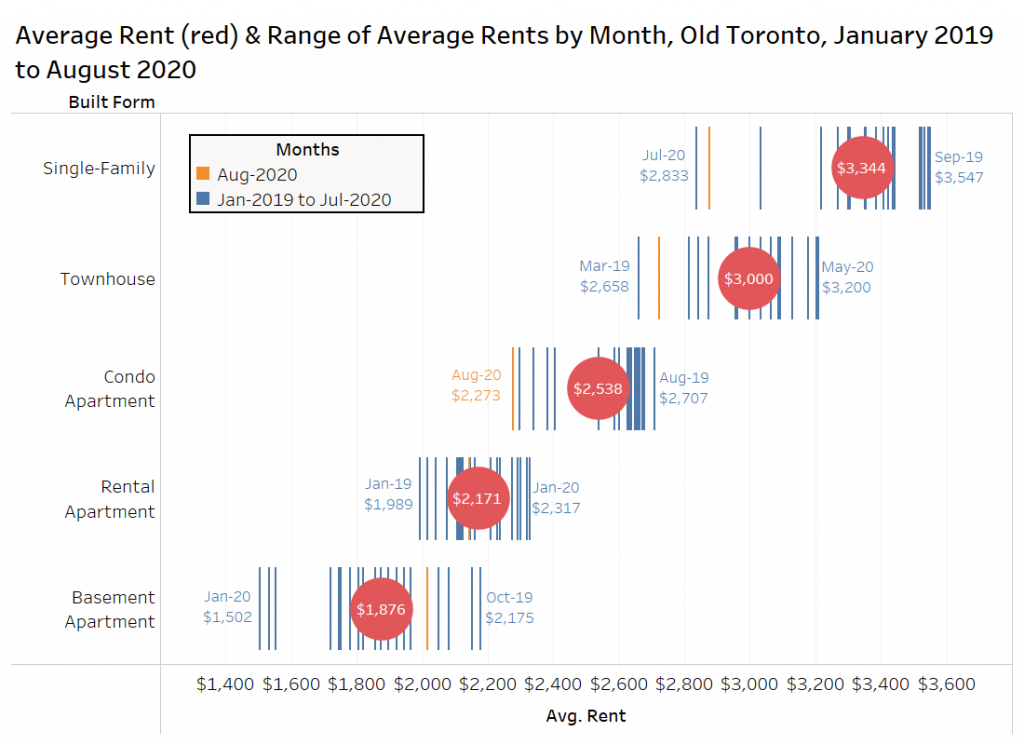 Rental apartments were offered at $2,141 per month in Toronto on average in August 2020, about $30 below the longer-run average, and below the 20-month peak of $2,317 recorded in January of this year.

Eight of the 11 neighbourhoods shown in the chart below have experienced double-digit declines in average rent, with the Waterfront Communities (boundaries shown in the inset map below) down 16% year over year, a savings of about $440 per month for the average tenant.

The average rent and annual change in average rent for condominium apartments and rental apartments in July and August of 2020 versus the same two months in 2019 are represented in the chart below. 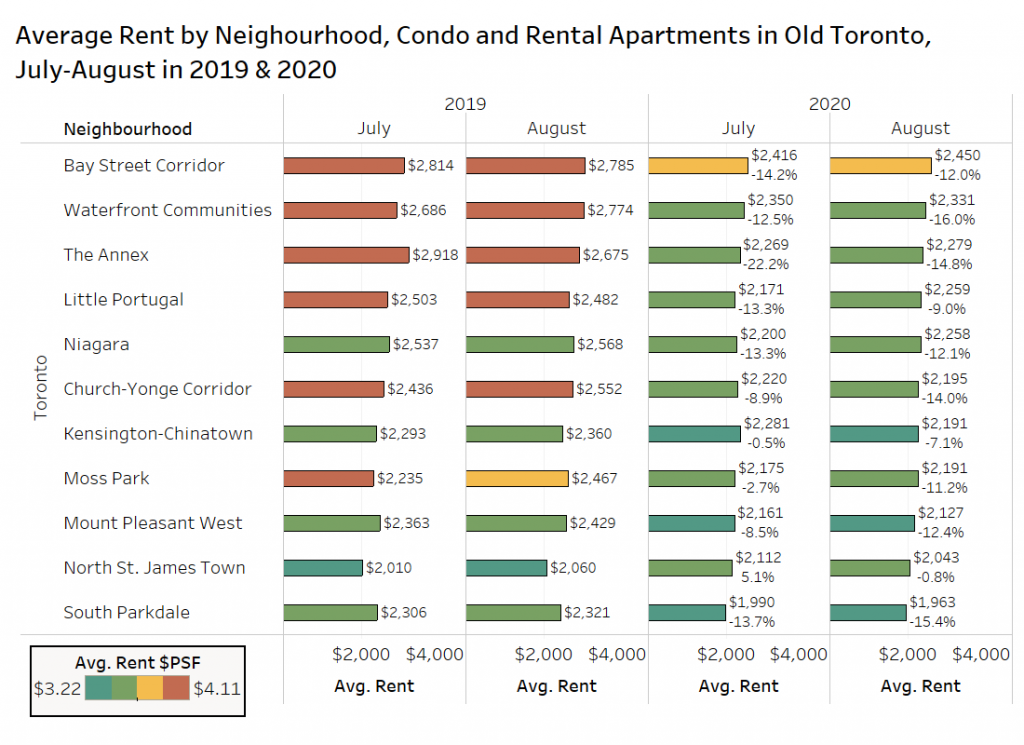 The postal code map below looks at condo rental rates only in the downtown Toronto area. 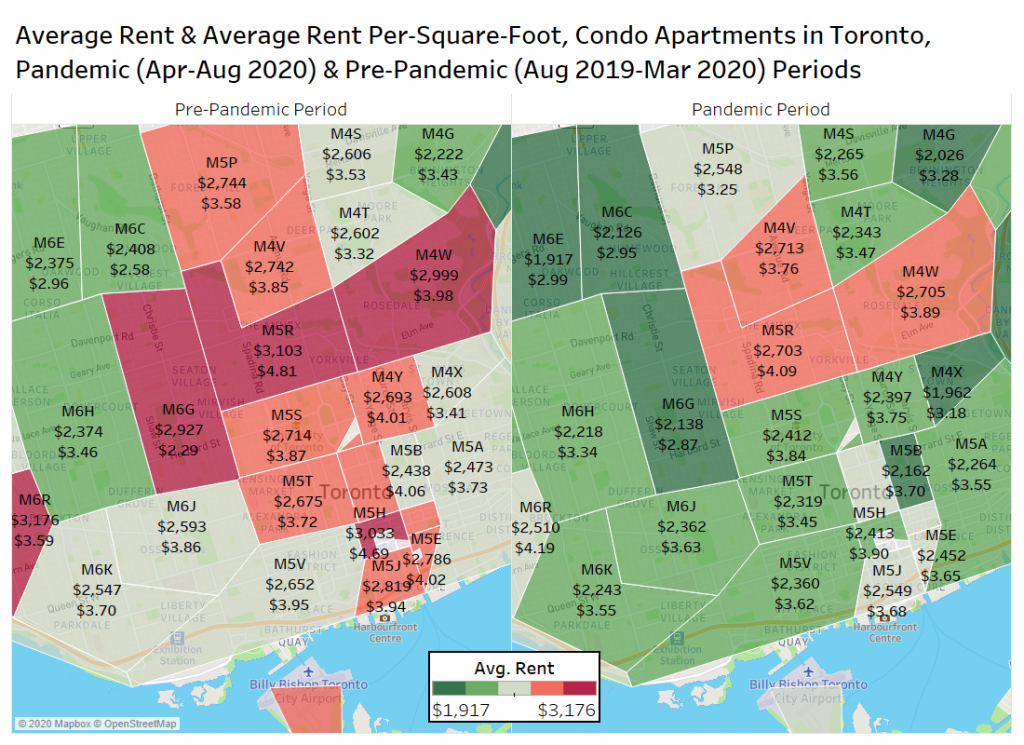 Most of the postal codes have experienced declines over the two periods, with the most active postal code, M5V, seeing average rents decline by 11% to $2,360, with per-square-foot rents dropping from $3.95 psf to $3.62 psf, an 8.4% reduction.

The declines can be attributed to less immigration, fewer students downtown, the work-from-home phenomenon, shifting demand to cheaper locations, and more completions. One of the biggest factors is an increase in the supply of rental units due to a lack of tourism. Short-term rentals have been shifted to the full time market, especially small units in new centrally located condo projects.

The scatter plot below looks at the average rent per square foot on the vertical axis and average monthly rent on the horizontal axis, concentrating on condo projects with 50 or more listings in the pre-pandemic period (orange – August 2019 to March 2020), and the pandemic period (blue – April 2020 to August 2020). 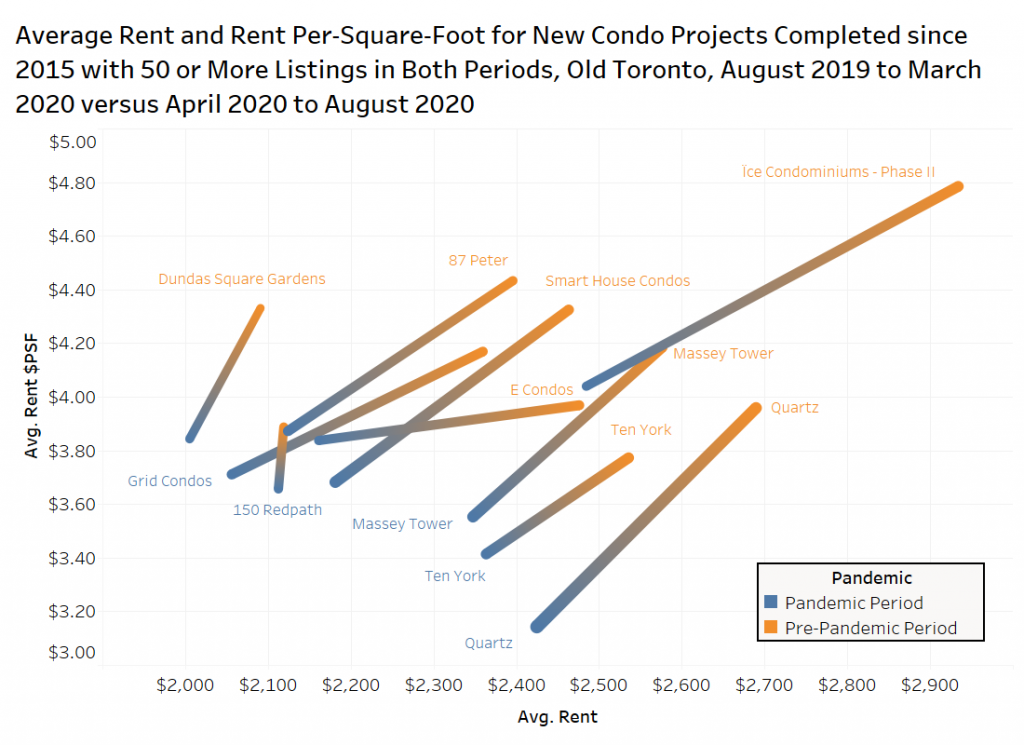 Despite the pandemic and the average rental rate declines, several buildings in Toronto have experienced rent growth when comparing January to August 2020 versus the same months last year. This chart focuses on condo and rental apartments with 20 or more listings in both periods.

A couple of the projects in this list are right downtown, where other projects have declined by as much as 20%. 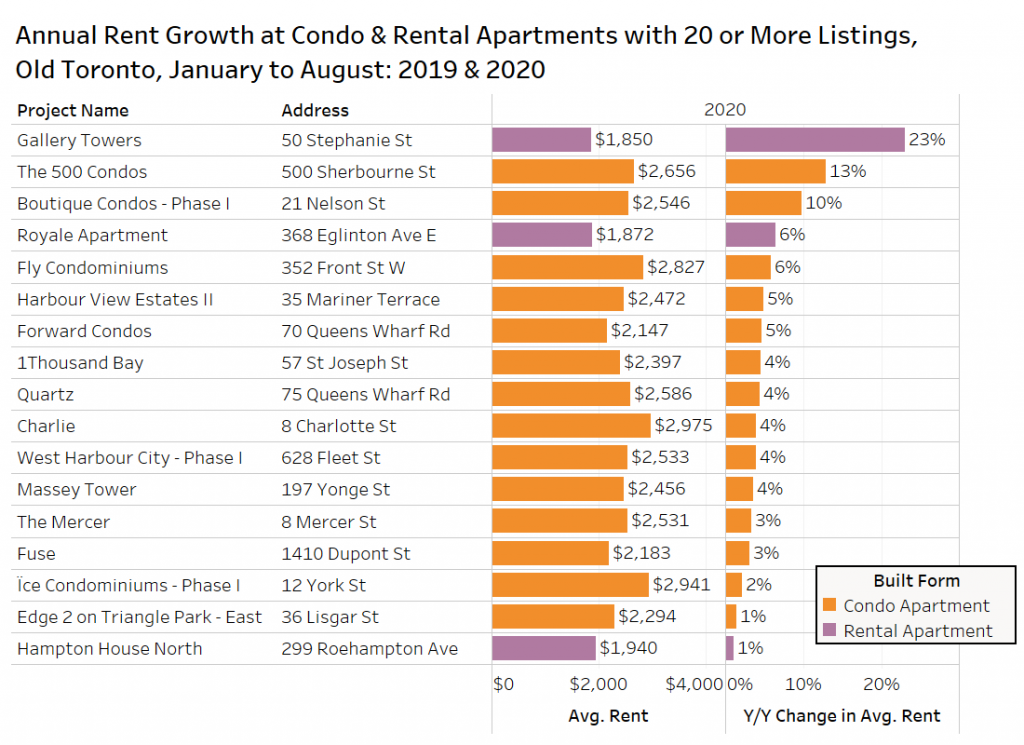 Overall, the rental market in the GTA continues to decline, but much of that decline can be attributed to a significant drop in demand for condo rentals downtown.

On a rent per-square-foot basis, areas like Etobicoke, North York and Mississauga are actually experiencing rent increases, but this may be partially due to an increase in listings for smaller suites, as people working from home are looking for larger suites to accommodate an office.

A rent freeze in Ontario should further reduce turnover for rent controlled buildings, but the lifting of eviction bans could offset that by increasing supply of cheaper apartments.

It is likely that the market will continue to tread water, and even decline downtown as more supply comes via completions, and household formation is stunted by less job growth and fewer immigrants.