UrbanToronto is somewhat of a unique site on the internet. While its front page is a news source, the bones of the site is its Forum where thousands of members discuss all matter of topics concerning Toronto and its surroundings, the core topic of interest being how the city is changing through new buildings and infrastructure. Anywhere there’s a shovel going into the ground, we have a thread for that… and with every thread you get posts filled with facts, opinions, renderings, and photography. You also build relationships of a sort, as contributors—even though they usually use avatars in place of their real names—become known for the quality of their contributions and interactions, whether through their writing or photography

…and when one of the the site’s most consistent contributors is gone suddenly, you feel it. 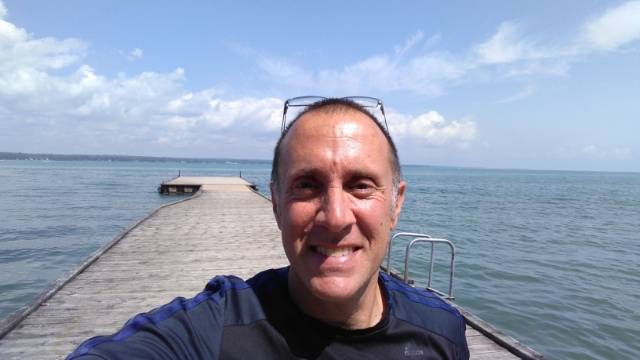 Jason Zytynsky, known on the UrbanToronto Forum by his handle ‘Jasonzed,’ was one of our most valued longtime contributors. Having posted 7,785 times over 15 years, he was among the most prolific UrbanToronto contributors, particularly when it came to sharing his photography. Jasonzed photos, especially those taken from his drone camera, would pop up nearly every day, usually documenting the growth of Mississauga, but also venturing out across the whole of the Golden Horseshoe as well.

Interests including construction, architecture, and photography had led Jason to discover UrbanToronto in 2006, where he became familiar to our vast audience through his documentation of the iconic Absolute World development. Starting off with a Fujifilm HS10 point-and-shoot before evolving to a Nikon D7100 DSLR, Jason’s quest for the next great shot would eventually take him to the skies, through a series of camera-equipped drones that he would use to show impressive aerial views captured from all around the changing region. With his keen sense of where to aim the camera and how much context to include, Jason was always able to convey what was important and interesting and new in his images, and readers came away feeling informed and up-to-date: even if you didn’t know him personally, you knew you could count on the guy.

Life isn’t that simple though, and what we didn’t know was that for years Jason battled mental illness, as his twin sister Karen shares with us. Mental illness is something that we still tend to keep under wraps, as a yearly campaign in January reminds us, we have to de-stigmatize it and talk more openly about it. We will do that later in this article in a note from Karen (and if you are suffering at the moment, we have posted resources at the end of this article where you can find help). We are also including a biography primarily written by Jason’s friend Katie Tucker. Interspersed between them, we are reposting classic Jasonzed photos pulled from various UrbanToronto Forum threads, while we will start with a collage of favourite images that Jason kept of himself, along with a couple of appearances by Kaution the Elephant, and Youppie. It will all make sense as you read on… 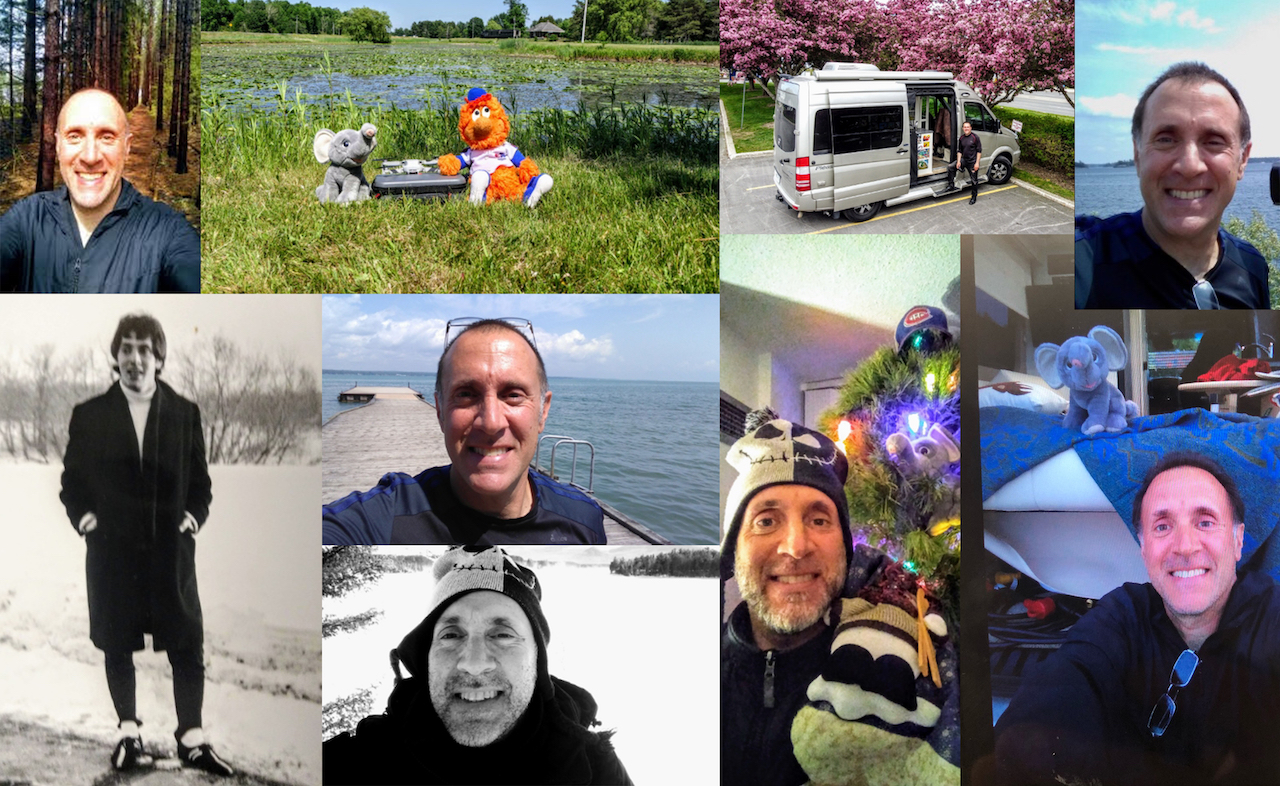 A collage of favourite photos Jason kept on his phone, selected by his Karen Zytynsky 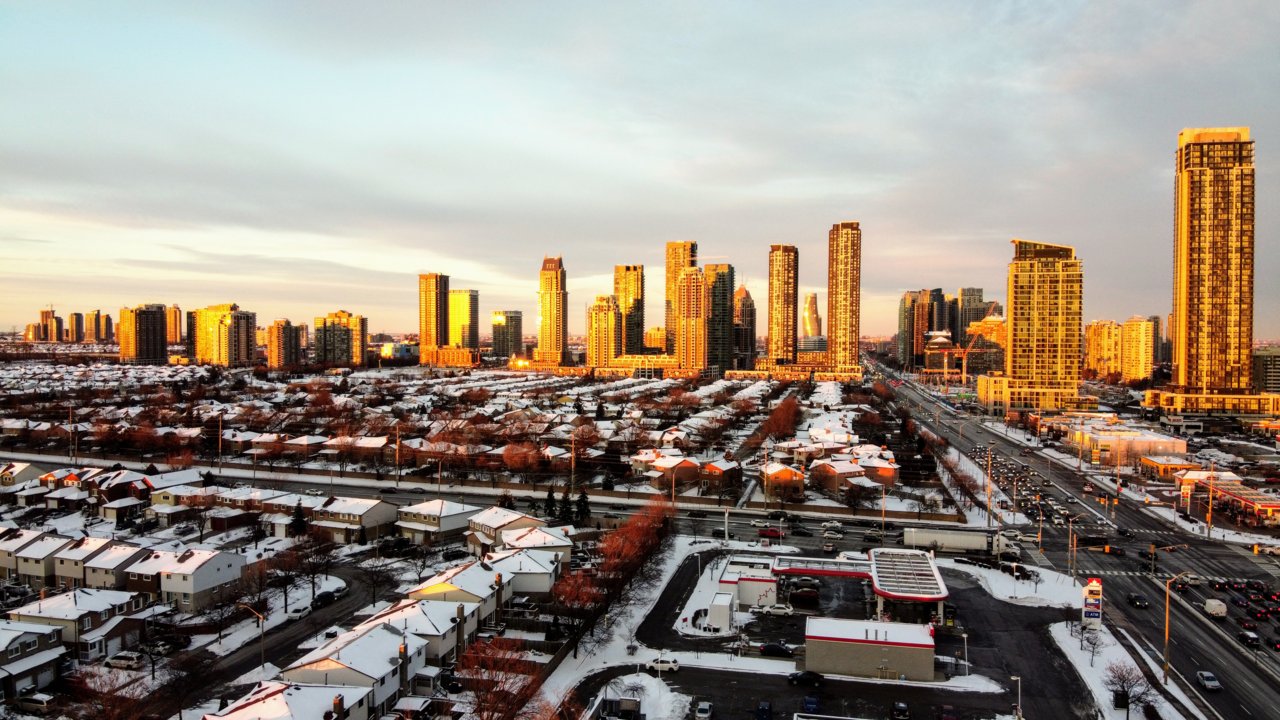 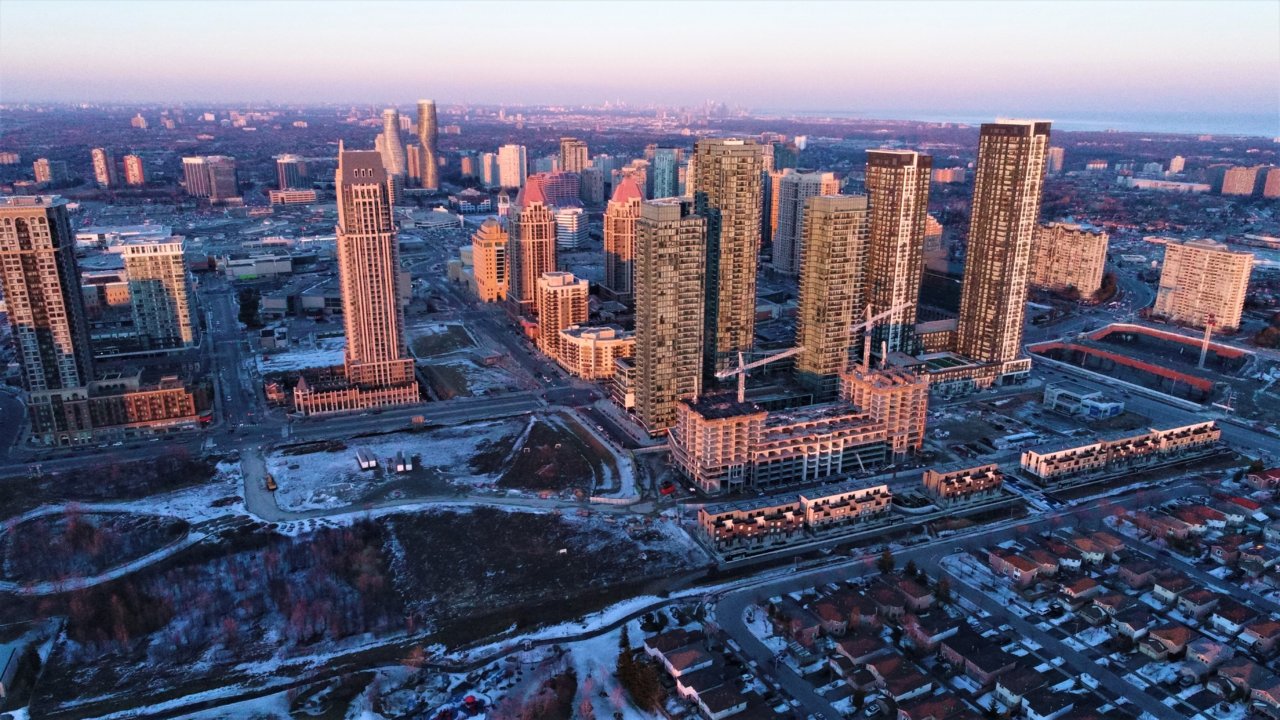 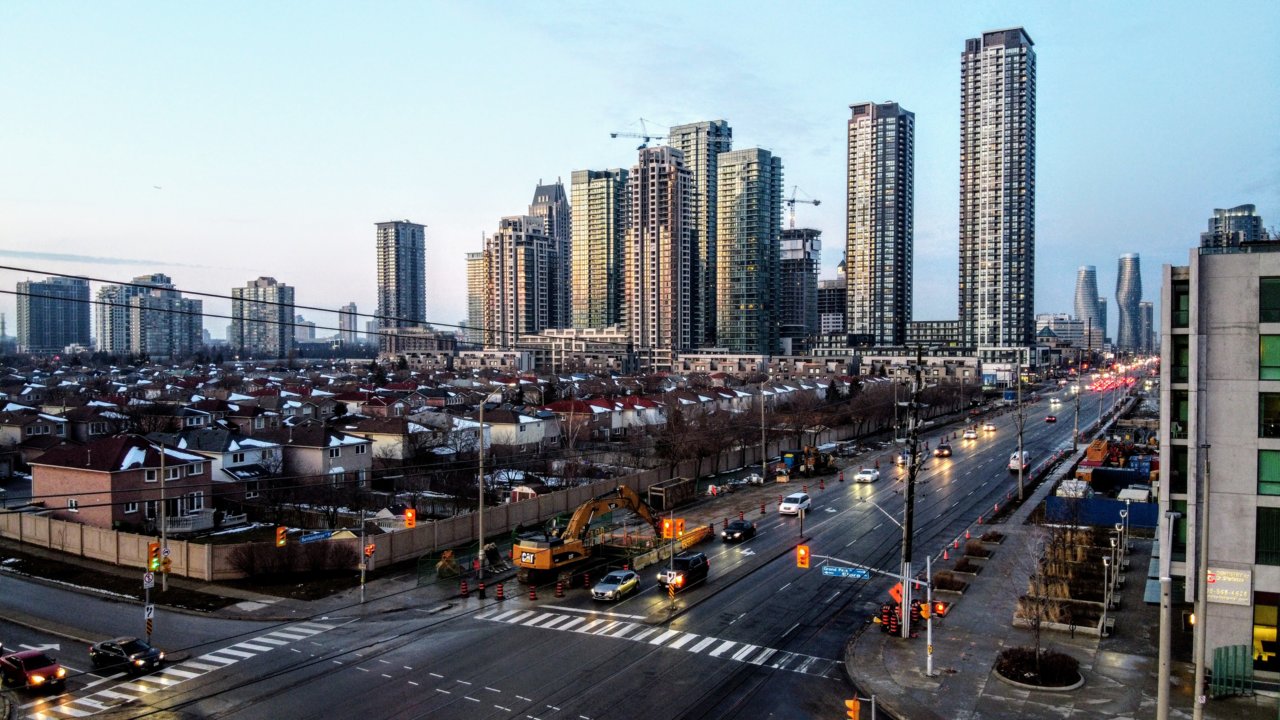 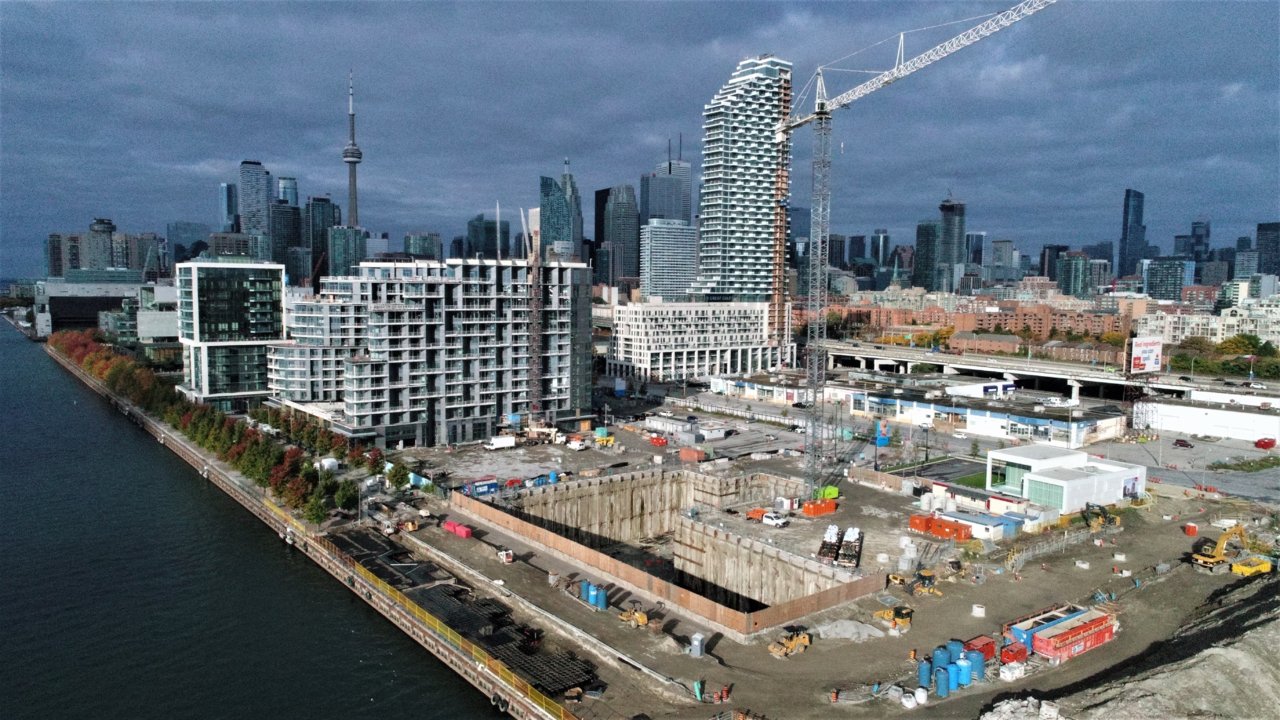 Sunlight picks out a construction site on Toronto Harbour, image by Jason Zytynsky

It’s with an extremely heavy heart that we share the news that Jason Zytynsky has passed away.

Born and raised in Montreal, Jason was an unwavering Habs fan. He had a great range of interests and talents, both intellectually and athletically. It was thanks to these gifts that he enjoyed a number of accomplishments, including earning the rank of black belt in Karate at a young age. After graduating from Concordia University,  Jason moved to British Columbia for a short period before moving to the Mississauga area in the mid 90’s. He started his eCommerce career at SNS, BCE Emergis, and eventually joined Descartes Systems Group as part of the BDX migration. Specializing in EDI Mapping and Activations, his career spanned 25 years. His glowing work ethic and dedication to his job was exemplified in his willingness to help out with the most complex issues and initiatives. His quirky sense of humour lightened the most stressful situations, and he was always supportive to colleagues no matter their experience. He mentored so many friends throughout his career and was always willing to teach and share his knowledge.

A proud uncle, a superbly brilliant philosophical mind, and an eccentric and quirky sense of humour, Jason had a fascination with nature and the world around him and was a lover of travel and adventure. Jason also had a great love for fine cars, playing sports—he boasted how he could keep up with the best of the young in ball hockey—travelling in his new Mercedes camper van, and The Beatles. A life highlight was visiting Abbey Road where friends and family connected via live camera to watch him cross and wave and to later enjoy an ice cream while Paul McCartney stood behind him in line.

Jason was prolific in photography and aerial droning and truly enjoyed sharing this amazing photography with friends and family. The photos he captured and his unique perspective in seeing the world through these lenses were nothing short of fascinating. He was an active senior member of UrbanToronto where he posted thousands of photos expressing his keen interest in urban growth and design. He had many builders approach him from around the globe to purchase his photos, and some now hang in Mississauga City Hall.

Jason has a twin sister Karen, who lives in the Ottawa area and two brothers who live in Montreal. He was a proud uncle of a twin niece and a nephew, Emma and Ethan, and an even prouder Godfather and uncle to their sister Natasha. He was the loudest and most proud of Uncles in the ringette, hockey and synchronized swimming stands, and lived for his nieces’ and nephew’s victories.

He is preceded by the death of his mom, his Uncle Joseph and his Uncle John, all of whom he revered immensely and with whom he shared his intense brilliance and sharp mind. His admiration of his uncles and their careers led to an enduring love of Star Trek (in which his uncle had a pivotal role as Commander Kor), and he enjoyed many science-fiction conventions, meeting those who were like-minded, and enjoying their community.

He was many things to many people and touched those he knew in immeasurable ways. May his legacy as a friend, brother, uncle, colleague, and truly gifted man live on in our hearts.

— Katie Tucker with Karen Zytynsky, and thanks to Heidi Tucker 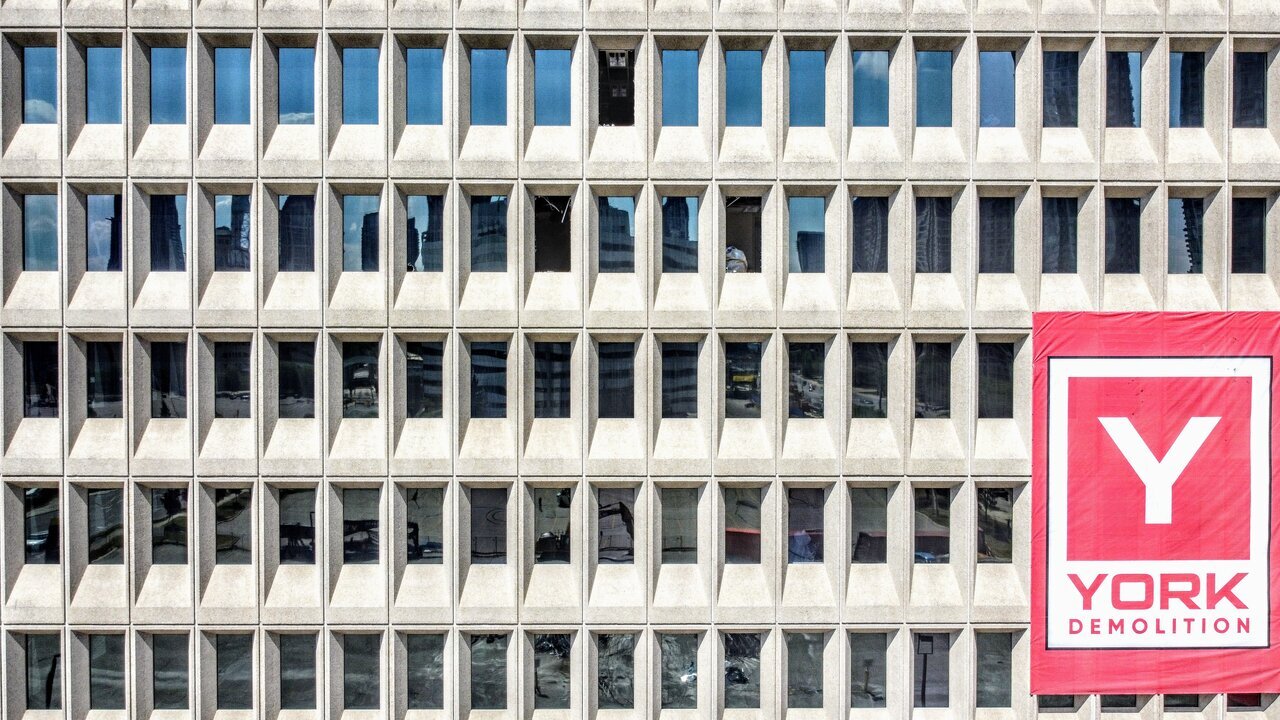 The gridded front of a building about to come down in Mississauga, image by Jason Zytynsky 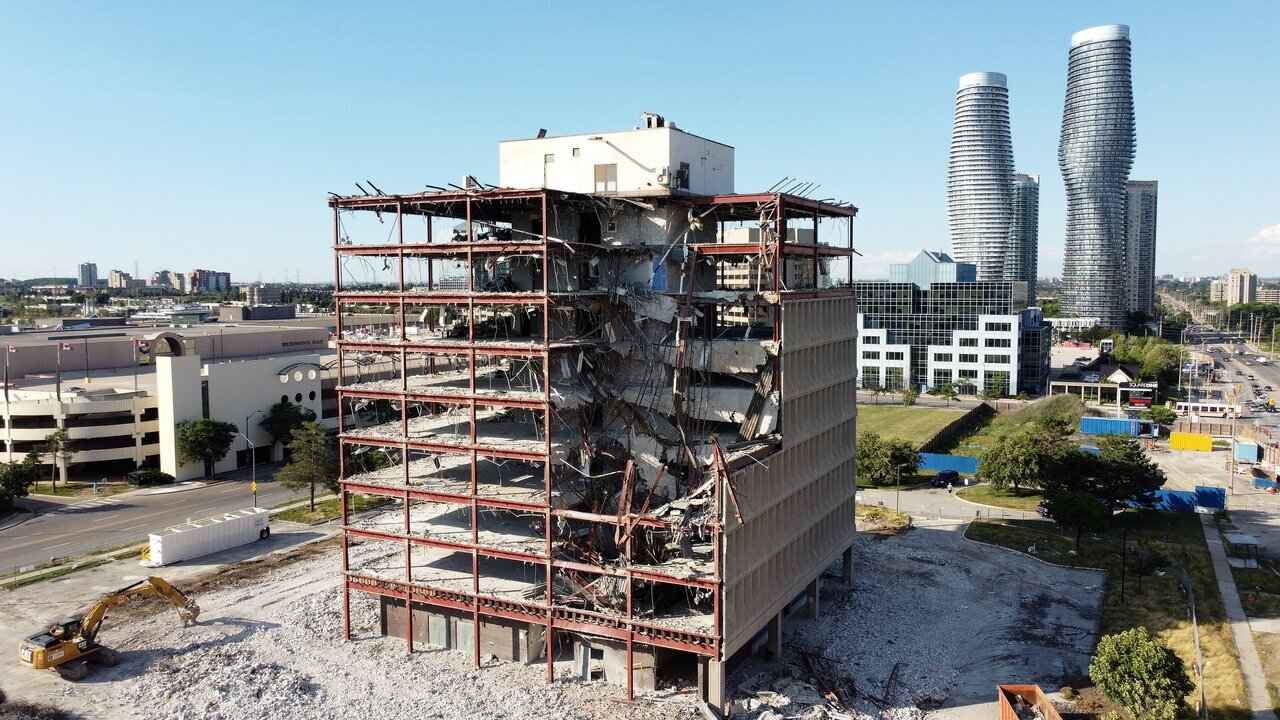 A building coming down beside Square One, image by Jason Zytynsky 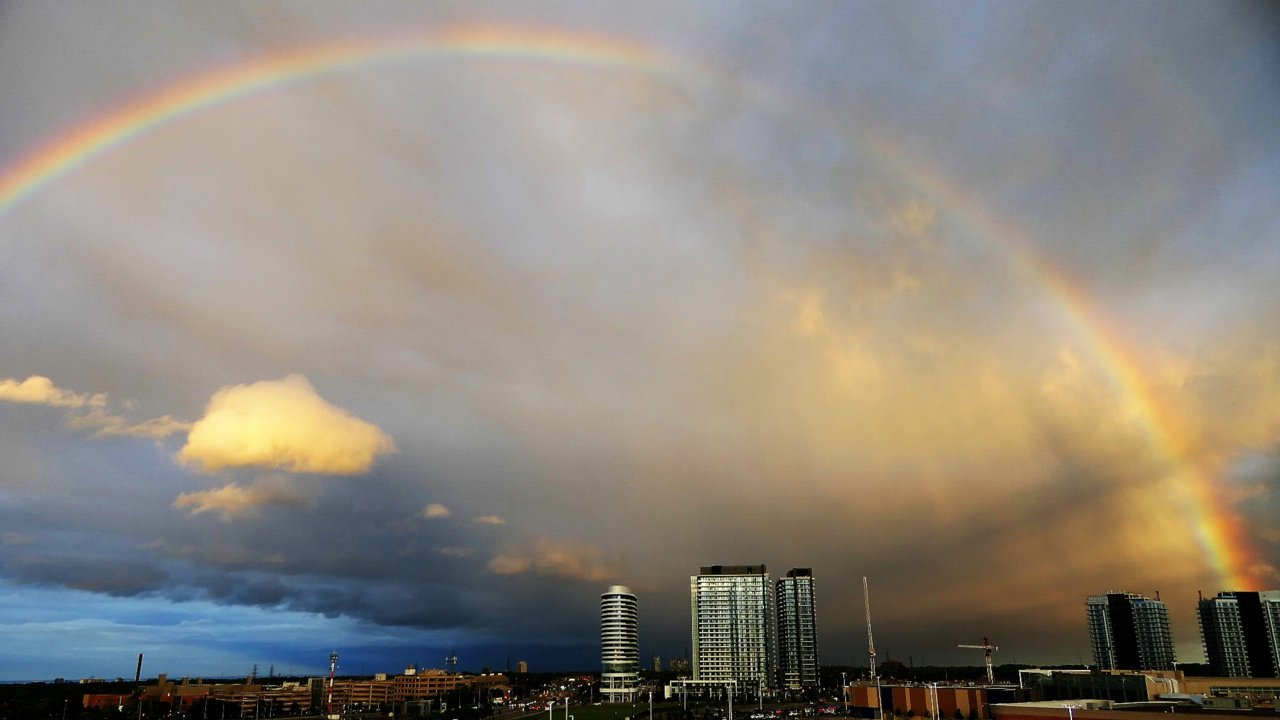 A rainbow over Erin Mills, image by Jason Zytynsky 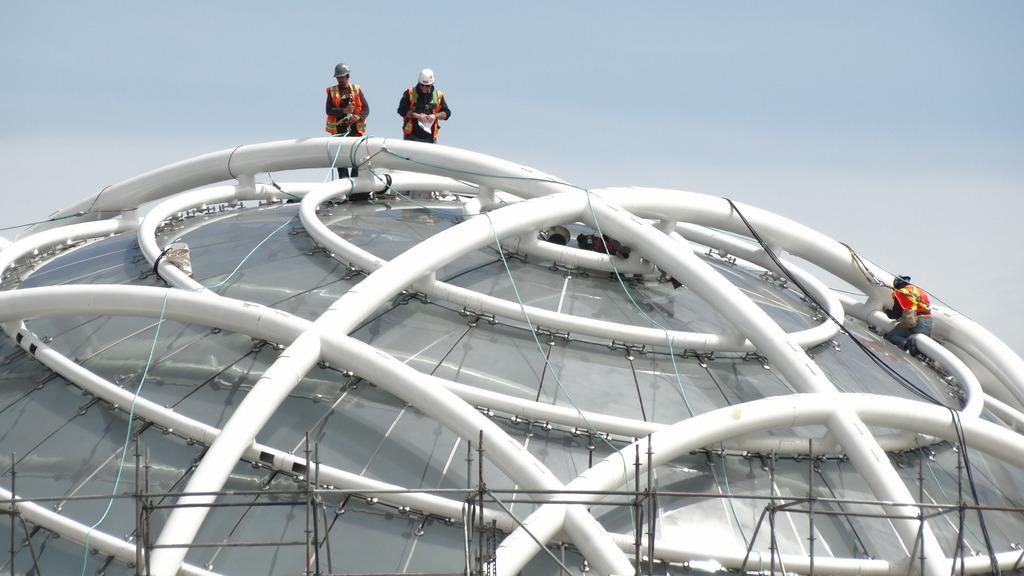 Workers complete the installation of glass on the sphere at Erin Mills Town Centre, image by Jason Zytynsky

Jason was revered by many in both his professional career and personal life. He brought the natural and urban landscapes around us, both locally and around the world, to life through photography and aerial droning.

He lived a physically healthy clean lifestyle and believed in a holistic approach to healing.

Over the years, Jason struggled with anxiety and panic disorders that manifested in severe physical ways, such as seizures, muscle spasms, electrical currents throughout his body and visual impairments. He was able to manage these struggles and overcome the physical pain with the support of friends and family for some time. However, as time went on, his struggles became greater—he struggled more significantly and more increasingly and often would not face the depth of own mental issues. A pragmatic and logical soul, he was steadfast in his belief that it was his own mind and he could manage it through simply speaking to those around him— which ultimately prevented him from seeking the professional help he desperately needed. Weeks closer to his death, he was expressive about his darkness and mental anguish and I believe underestimated the power of this illness. Equally important, we all did. I thought he would collapse from exhaustion and stress, first and foremost. Confusing was that he maintained all responsibilities with work and continued to drone and post aerial photography almost daily. Still maintaining hope, he was consumed with anxiety, guilt and darkness. As his anxiety grew, the physical pain that came with it also got worse. It led to intrusive thoughts and the exhaustion that comes from sleep deprivation. Yet still he resisted taking time off work, seeking professional help, and turning to the world of western medication—it was admittedly due to pride and or fear of the stigma surrounding mental illness, not emotionally able to accept that this was a disease, as potentially damaging as any physical ailment.

Out of this tragedy and confusion must come a greater understanding and awareness of mental illness. Jason was proud, compassionate, generous and determined in his way. He had accomplished success, admiration from others, and love from his family and friends, but in the end suffered a void so severe he felt he had no other option but to take his own life.

We must recognize in ourselves and others the signs of depression. The toll of anxiety and panic attacks have on not only the one suffering but the family and friends around them. My brother resisted help for this disease—and for anyone who is struggling with mental health right now, I implore you not to resist. Get professional help. Reach out. John Donne once said that no one is an island—he was right. We are all vulnerable and fragile—but together we have strength.

Let Jason not be defined by this illness. Rather, let us allow ourselves to be empowered by his grief and recognize, discuss, embrace and address mental health in ourselves and others before the darkness prevails. I celebrate Jason for his strength, generosity, commitment to and responsibility he felt for others before himself.

He was Jason Zytynsky. He was my twin brother. A friend. Let his legacy never be forgotten. 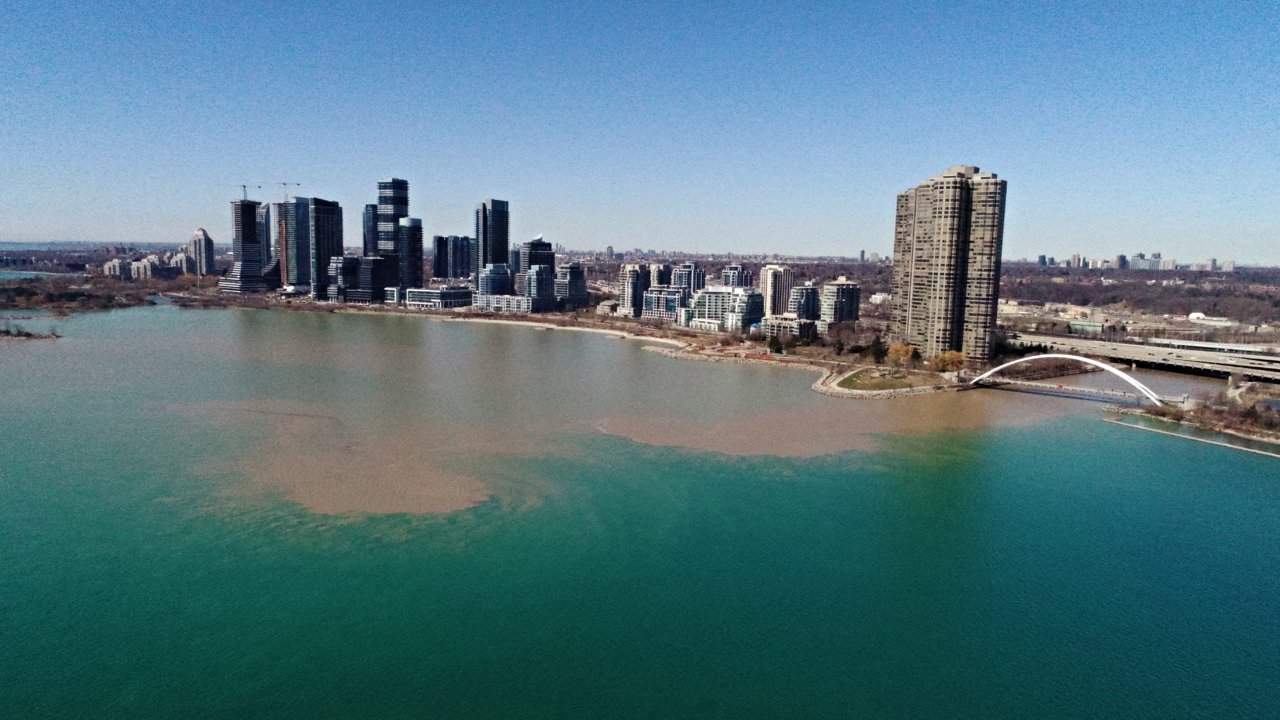 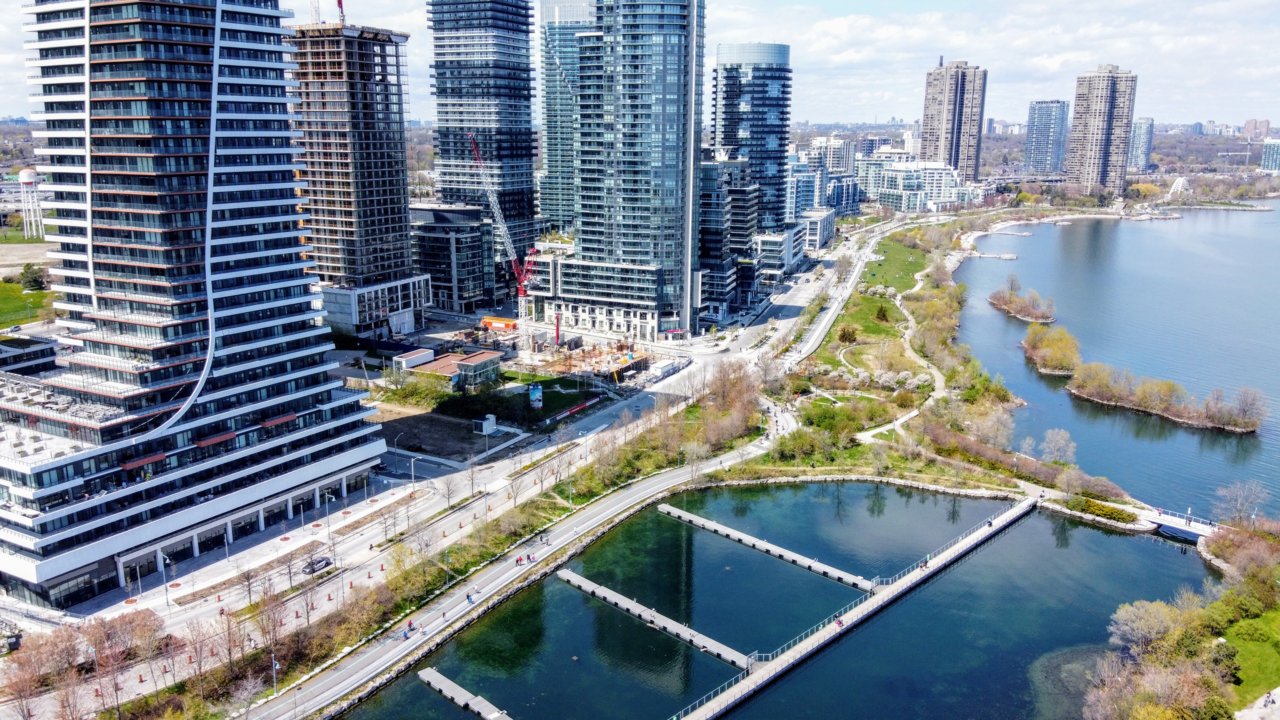 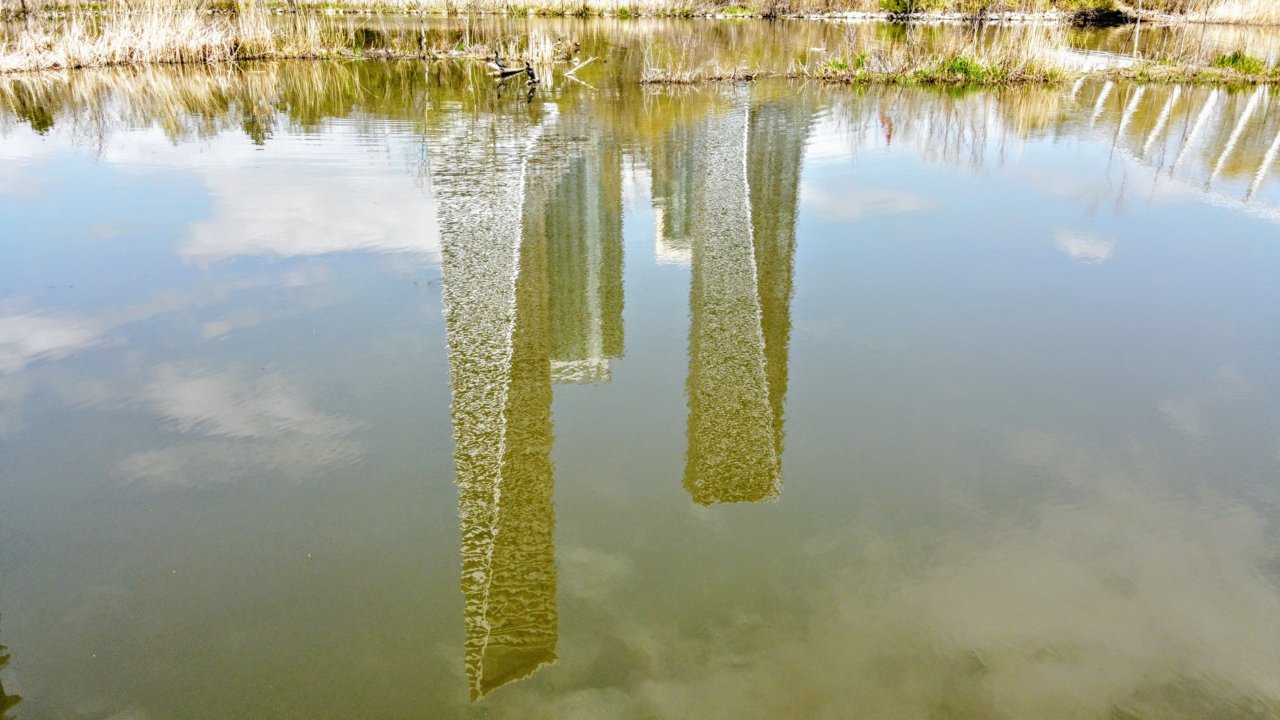 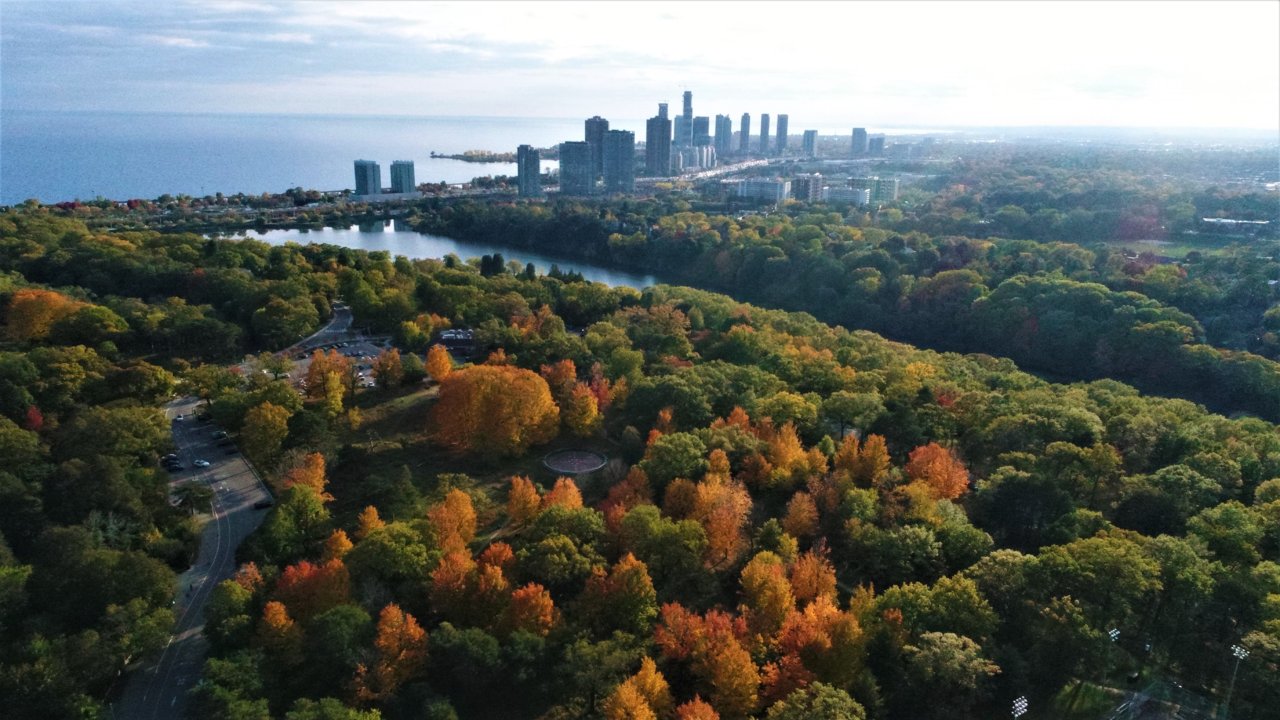 Over High Park in the Autumn, image by Jason Zytynsky

UrbanToronto is planning to honour Jason’s legacy by creating an annual Jason Zytynsky Award, to be handed out in October of every year, and coinciding with Mental Health Awareness week. We are still working out the details of the award, but we will post them once they have been settled. In the meantime, Jason’s family are honouring him through donations to Habitat for Humanity Halton-Mississauga-Dufferin, a favourite agency of Jason’s who partner with families in need to build homes. UrbanToronto is similarly donating to them, and if you are interested in helping too, you can learn all about them here.

If you would like to leave a note regarding Jason’s legacy, we have a created thread which you can add to, here.