A Site Plan Approval application (SPA) was submitted to the City of Toronto in late March, 2021 for a mixed-use development on Block 20 of the West Don Lands (WDL), located along the WDL’s southern edge. UrbanToronto last wrote about the project one year ago. The Zoning By-law Amendment (ZBA) application for the property, municipally known as 125R Mill Street, was approved through a Minister’s Zoning Order in October, 2020. Since then, design refinements for the scheme that will be home to almost 1,100 future residents and more than 2,000 workers, helping to transform the neighbourhood into a mixed-use community in which to live, work and play. 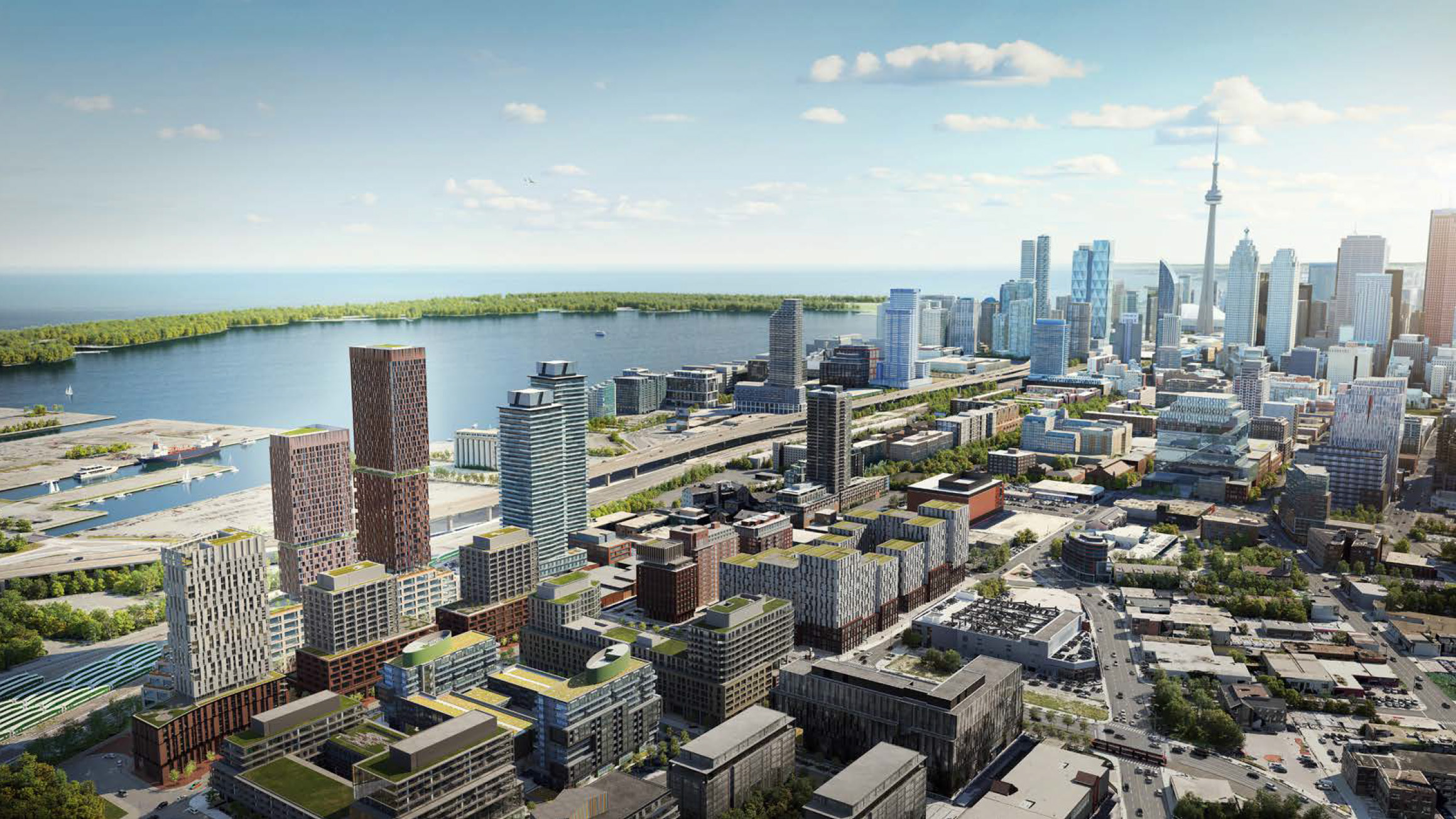 Looking southwest to the proposed WDL development within the existing context, image by Henning Larsen Architects

The project is spearheaded by WDL 20 LP, a partnership of developers Dream Unlimited, Kilmer Group, and Tricon Capital Group. In 2018, the team entered into a 99-year land lease with the Province through its Affordable Housing Lands Program for Blocks 3, 4, 7, 8, and 20 to develop more than 2,500 rental units in the WDL including 700 affordable rental units, as well as office and retail uses, community use space and public realm improvements. 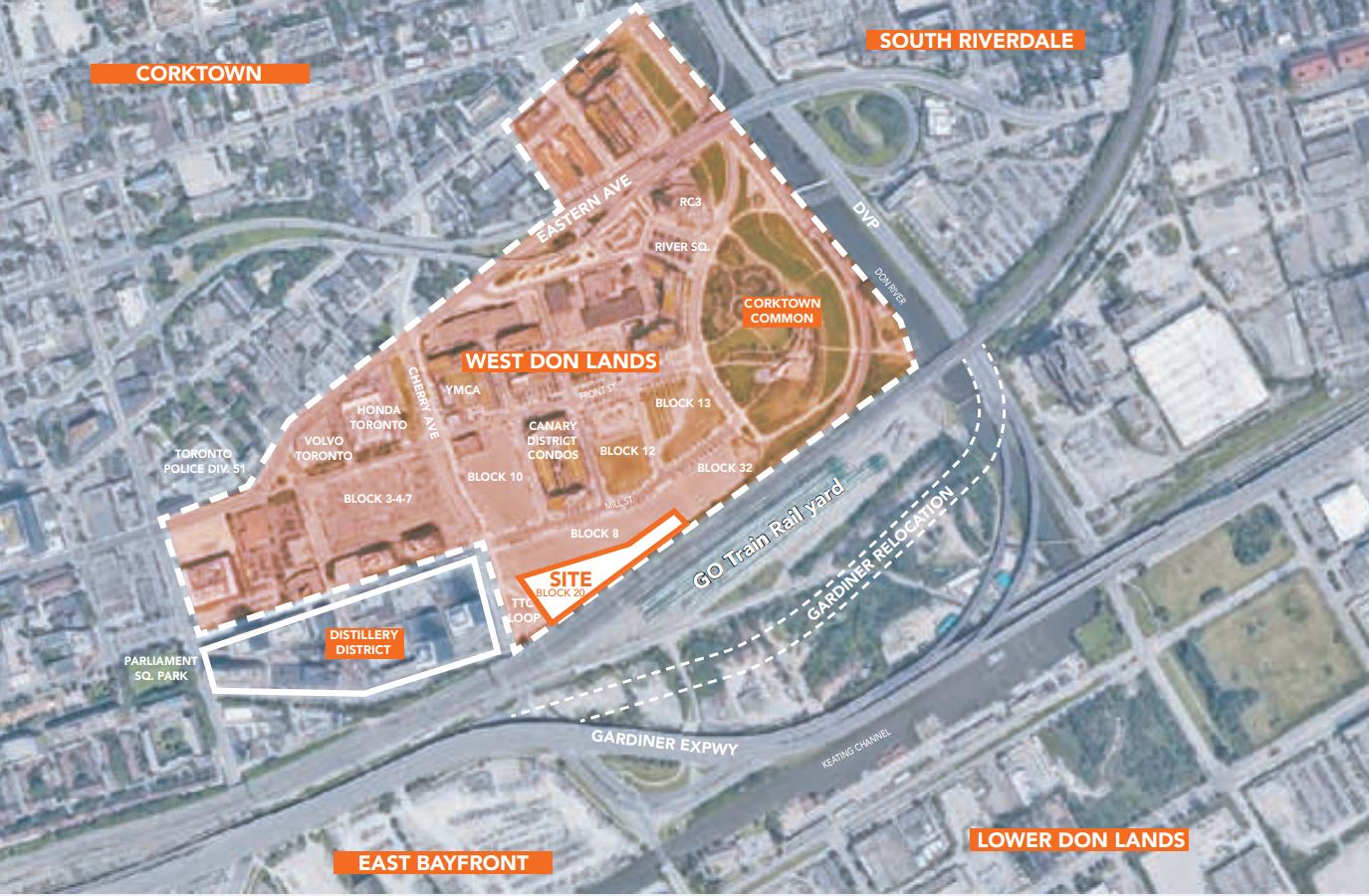 Block 20 context within the WDL; east of Cherry and north of the rail corridor, image by Urban Strategies

As illustrated below, the emerging shape of development in the WDL features mid-rise buildings within the central portion of the neighbourhood, with tall buildings located along its edges and lining both sides of the rail corridor.

For this site at the southeast corner of Mill and Cherry streets immediately east of the Distillery District, internationally recognized Henning Larsen and Toronto’s architects—Alliance have designed a 6-storey base building with towers of 45 and 32 storeys above. The proposed development would deliver the first major office development in the WDL, including 23,727 m² of office space, accommodating more than 2,000 jobs. It also seeks to create significant additional housing diversity in this evolving neighbourhood, providing 654 rental units in the two towers, 196 of which are affordable rental units. The towers’ 7th floor is given over to residential amenity space: 1,679 m² of indoor and 1,404 m² of exterior terraces across the podium rooftop, including a pool. 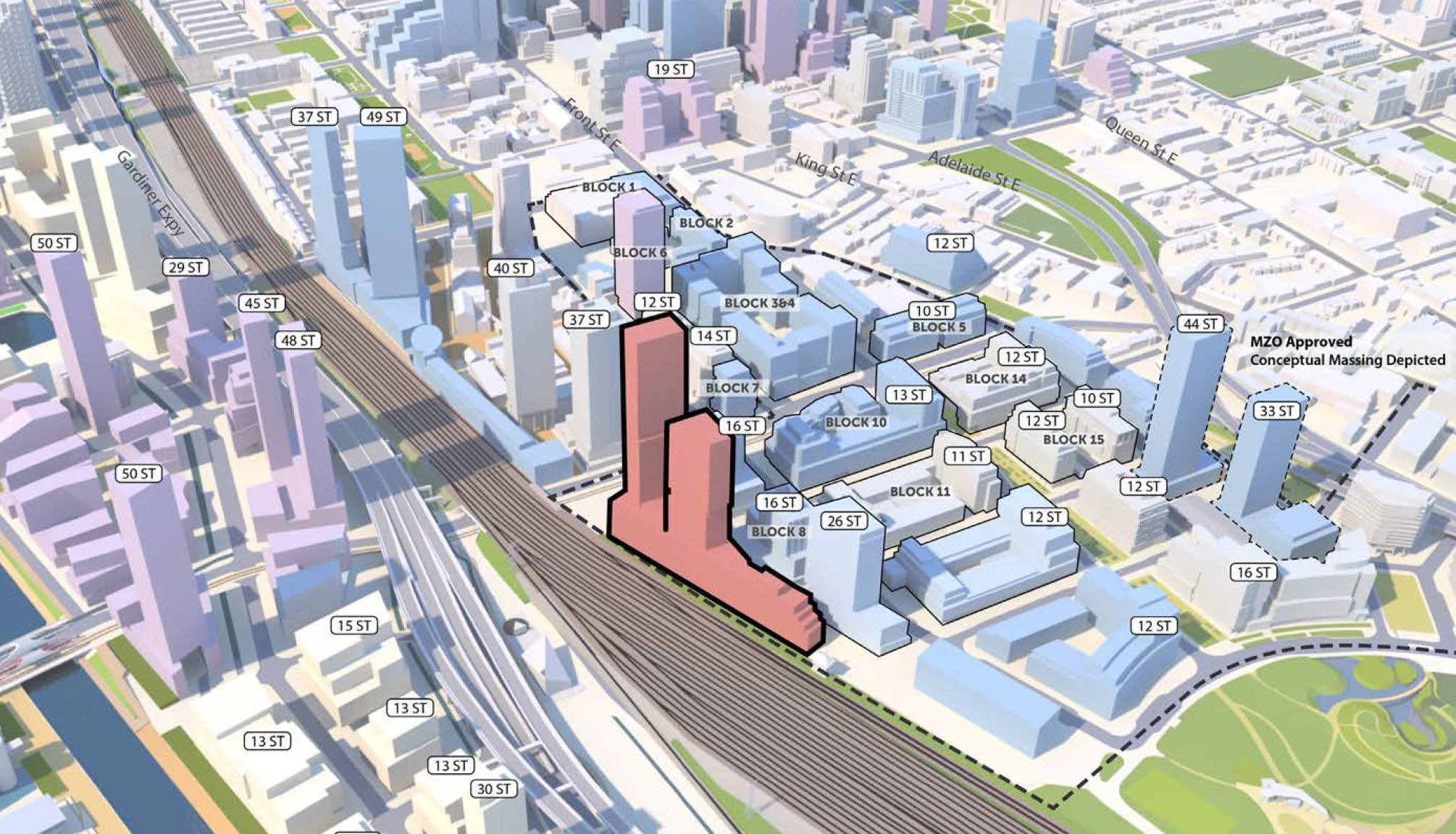 The towers are positioned on the western side of the site, away from open spaces and lower neighbouring properties to the east. The massing of each tower is segmented horizontally, the upper sections offset from the lower sections to create visual interest and to increase tower separation distance.

The podium, which includes retail and lobby spaces at grade and offices on floors 2 through 6, creates a pedestrian-scaled streetwall and is similarly proportioned to podiums of the adjacent Block 8. Step-backs provide additional articulation and create terraces. 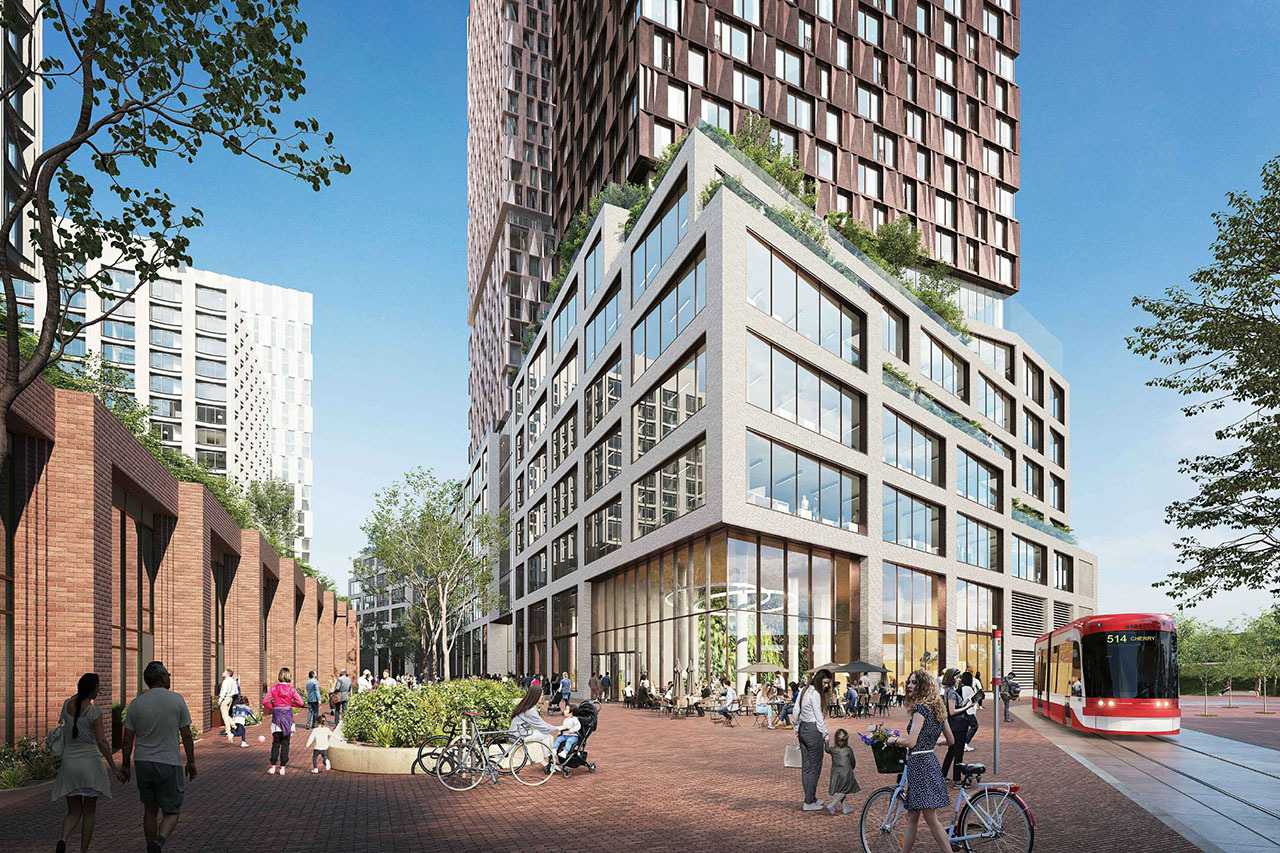 Looking east into the site from Cherry Street, image by Henning Larsen Architects

In this new scheme, an enhanced POPS (Privately Owned Publicly accessible Space) designed by Montreal-based Claude Cormier + Associés, expands the public realm to more than 50,000 ft² on Blocks 8 and 20, doubling the size previously contemplated for the site. It includes an urban plaza and pedestrian spine to improve pedestrian circulation in the broader area, with landscaping and materials that reference the heritage resources in the Distillery District. 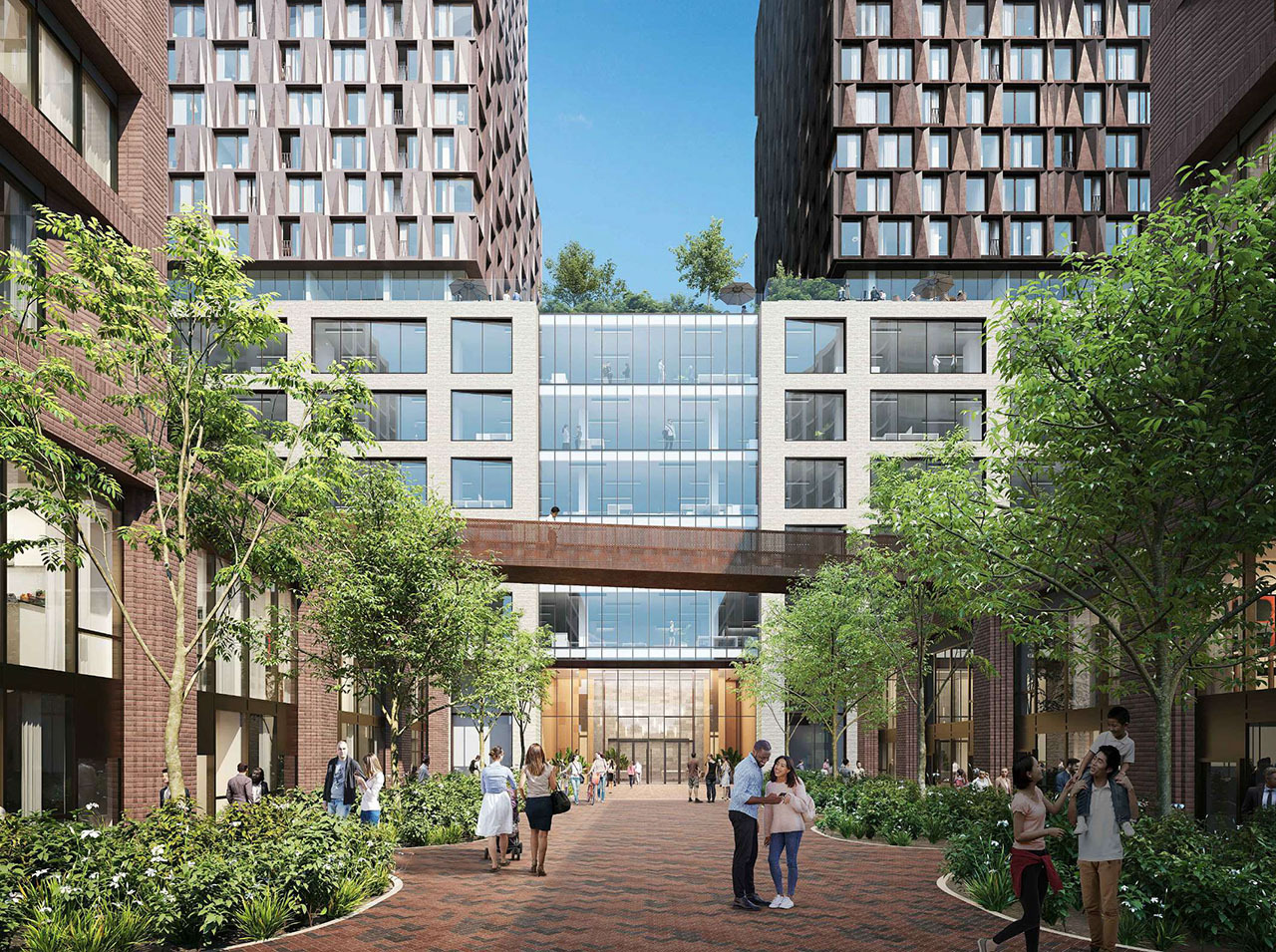 The design refinements and modifications are substantially similar to the previous iteration—a ZBA-approved design—maintaining the overall scale, mass, and materiality. It introduces reconfigurations of the building interior, landscaping arrangements at the podium terrace level, and progressive step-backs to the podium to mitigate the visual impact of the new construction. 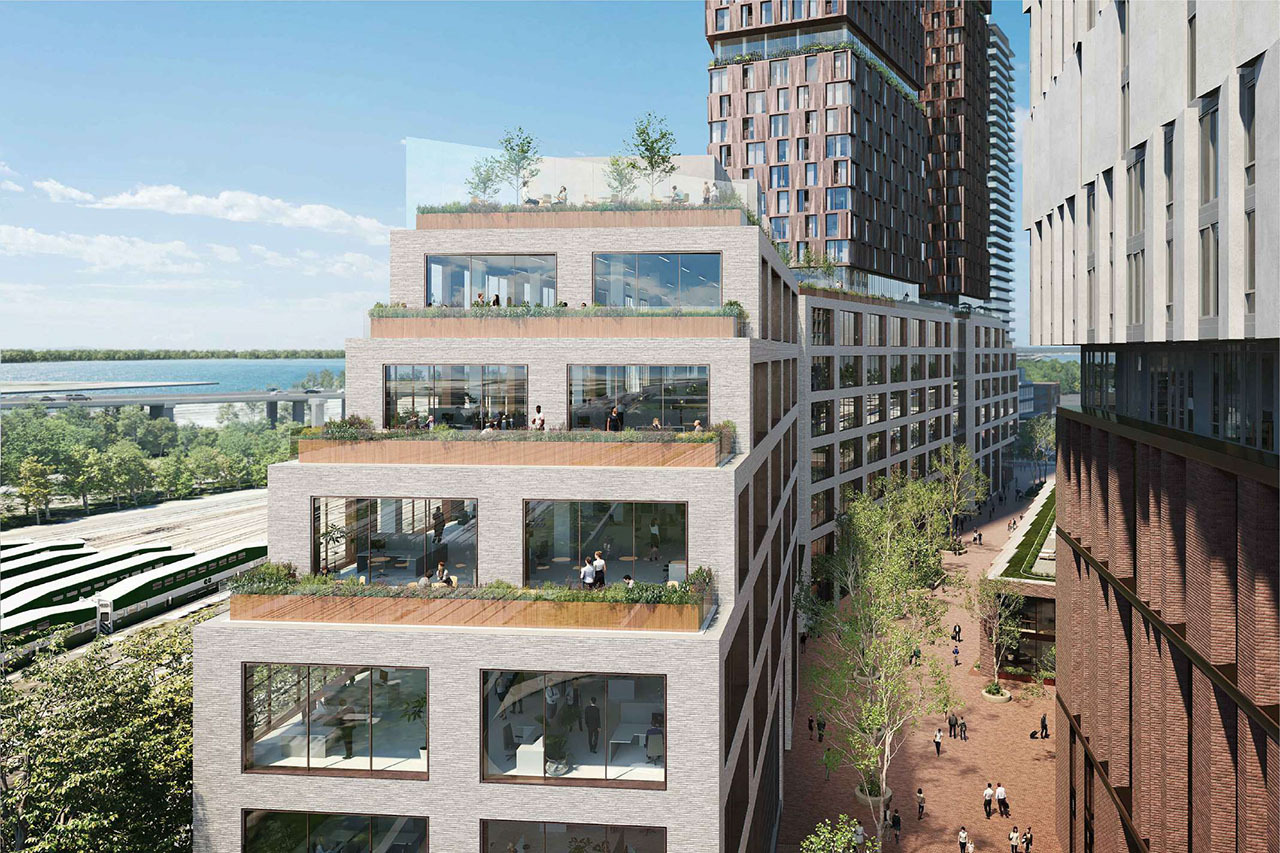